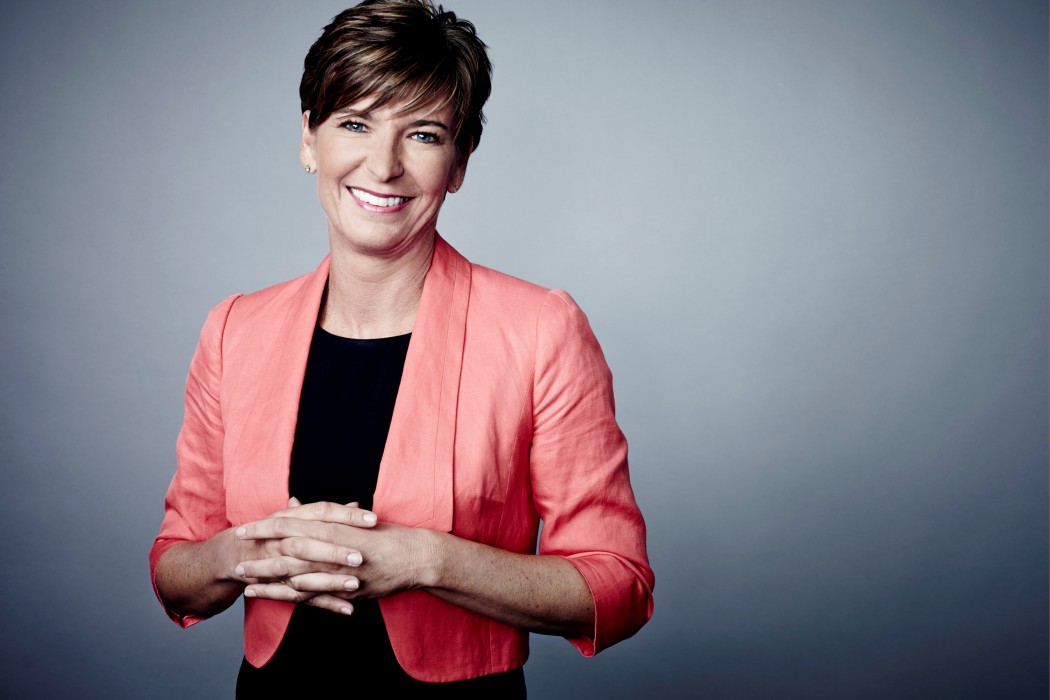 One of the first things a broadcaster learns is how to control their voice: intonation, pronunciation and, crucially, pacing. Veteran CNN presenter Becky Anderson does all of this perfectly on air, but off it things are a good deal pacier. For example, when asked if there’s such a thing as an average week for her and the Abu Dhabi-based CNN team, she answers with 170 words, machine-gunned out in under a minute (the answer is essentially “no”).

In the week after we talk she will interview Queen Rania of Jordan and actress and activist Salma Hayek, but for now we’re on the CNN roof, just outside their conference room. Inside there’s a large TV with a camera above it, a pair of speakers below. Beside them a router blinks rapidly. On a large table a conference-call speaker (emblazoned with “No Mobile Phone Buzz”) is currently silent. The room looks tense, like it’s waiting to be reanimated, but outside things are considerably breezier. A warm wind blows around the twofour54 campus below; in the distance the skyline of Abu Dhabi’s Corniche is visible. “We like this studio, it gives more of a sense of [being outside] rather than a confined studio space, which I’d been in for a long time,” says Anderson, who broadcasts Connect The World from here at 7pm every weekday. “I’m more comfortable in an outside space in execution and it’s better for the team if I’m good at what I do.”

The British presenter had been coming to the UAE on and off for 15 years, but having arrived in March for something more permanent, this was her first full summer in the Middle East. Before the move she’d hoped there’d be enough stories to sustain a primetime news show; the ugly, violent summer of 2014 taught her to be careful what she wishes for. Now, in order to cover as much as possible, some weeks she finds herself working upwards of 90 hours. “This was always going to be a summer of reckoning… We’ve been able to establish a news show very, very quickly,” she says. “Telling the story through the prism of the region is very important and I think we’ve done that.”

Anderson has been with CNN since 1999, primarily based in London though some years she spent as many as 200 days on the road, covering war, pestilence, famine, death – horrors man-made and otherwise. She acknowledges that journalists, especially those telling the most harrowing stories, can suffer a kind of post-traumatic stress disorder and I get the impression that perhaps she’s speaking from experience. When I ask what the worst place she has ever been is, she goes into a haunting story about the aftermath of the 2005 Kashmir earthquake. Anderson’s job is to tell the world’s stories in a succinct, digestible way, but without time constraints or the pressure of a live broadcast, she paints a detailed, troubling picture.

Her memory seems, if not photographic, then both broad and deep; she processes vast quantities of new information every day but retains an abnormal amount. You’d want Becky Anderson on your quiz team. With events such as those she witnessed in Pakistan, perhaps the inability to forget is as much a curse as a blessing, but mostly it gives her an advantage as an interviewer and storyteller.

A lot of the time she isn’t talking, she’s laughing a hearty laugh at memories of some of the odd paths her career has taken her down. Two of her best interviewees – or worst, depending on how you look at it – were Sacha Baron Cohen, who didn’t drop character as weird cartoon Kazakh Borat, and, surprisingly, David Beckham (she closed the interview with the former by saying, with an almost straight face: “I’ve got plough experience. I’ve got no history of retardation in the family. I’m not Jewish. Any chance that you and I could get together?” Borat rebuffed her advances.) With Beckham, the difficulties had nothing to do with his vulpine mental dexterity and everything to do with Anderson accidentally breaking his watch with her mic just as they went live.

Terrorising timepieces aside, she talks expansively about Twitter’s influence on the media, censorship, politics and oleaginous politicians, the Scottish independence vote, how she thought Belgium would do in the 2014 World Cup, female empowerment in the Middle east… thousands and thousands of words at an astonishing rate. I ask what makes her so good at her job and without pausing she initially she answers a slightly different question – what would make anyone a good journalist: “I don’t think being a journalist is about attacking people; I don’t think you get the best out of people that way. I think you can be respectful and interrogative…” I want to point out that she hasn’t answered about herself, but before I get the chance she says: “I think you should enjoy yourself. And I love my job. I absolutely love it.”