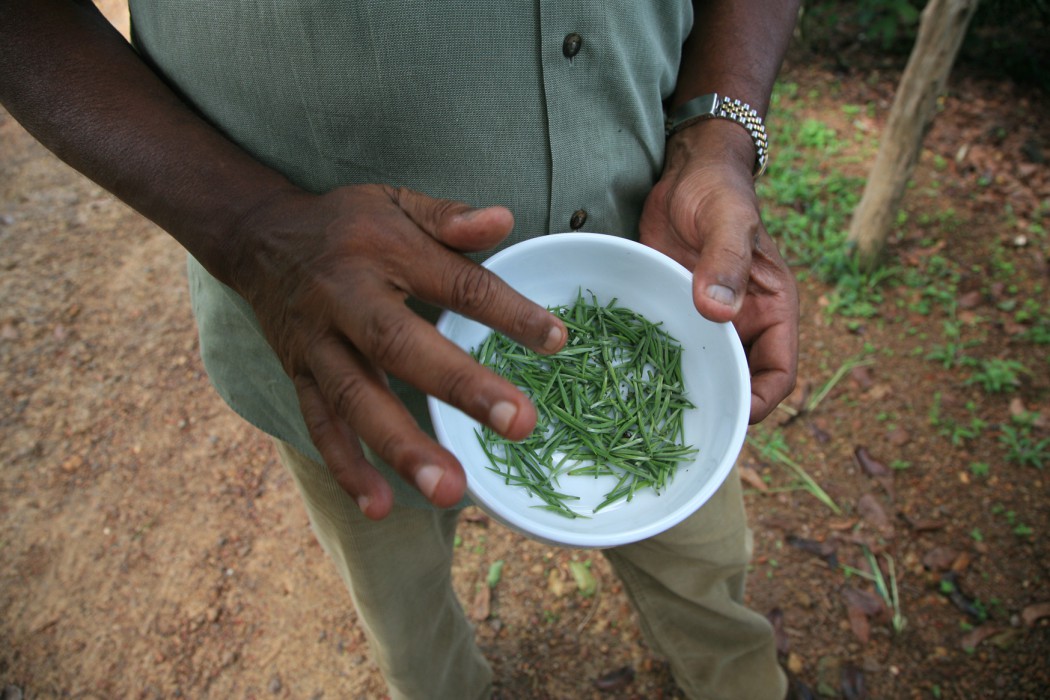 I first meet Malinga Gunaratne in his capacity as manager of Mirissa Hills, an upmarket hotel on the outskirts of Weligama in the extreme south of Sri Lanka. The place was never meant to be a hotel and Malinga, or Herman as he insists on being called, was never meant to be its manager. Originally it was designed as a holiday home for Miles Young of advertising giants Ogilvy-Mather, but during the development two things happened. First, workers found a significant crop of wild cinnamon on site, then Young was promoted to CEO, meaning he wouldn’t have much time to spend at his dream home after all.

Rather than leave it empty, the Brit decided to develop and Mirissa Hills, as it’s now sold, has a working plantation on site and has adopted cinnamon as its central theme. Alongside the hotel, there’s a museum dedicated to the spice’s bloody history on the island – invading colonial forces from Portugal, Holland and finally Great Britain literally went to war over it.

Herman tells me this story as we look out from Cinnamon Mountain, a sprawling bungalow on the apex of a hill at the top of the property. Peacocks and palm squirrels run amok on the lawn, while below the jungle canopy stretches almost to the sea, only interrupted by occasional rice paddies. Herman points to the right, telling me that he lives somewhere below and that he’s essentially looking after it as a favour to his friend, Young. He lets the staff at Mirissa Hills know that someone is always watching and, from the way he carries himself, I think that’s probably quite a good motivator. But this isn’t his main gig – at heart, Herman is a tea man. In the tea world, he is decidedly regal.

A few miles away, at his Handunugoda estate, the 66-year-old produces several varieties of tea, but he values his Virgin White above all. Almost everyone does. Selling at $1,500 per kilo (more than silver) Herman’s brew is one of the world’s most expensive teas. Only in the last year with the release of a novelty Chinese tea made from panda dung was Virgin White usurped as the planet’s priciest cuppa.

First developed in 2003, it may be the most valuable jewel in Herman’s crown, but he was wearing one long before its discovery. With 50 years of experience in the industry, and as the author of several books on the topic, few people are more expert on Sri Lankan tea production. He repeatedly tells me as much.

Later in the afternoon, as we amble around his humid jungle property, Herman lets anecdotes tumble from his mouth like coins from a leaky pocket. We walk past a coffee bush which he has grown to educate tourists: the occupying British originally wanted to use Sri Lanka for mass coffee production, but an aggressive fungus known as coffee rust bested botanists and blighted beans. Instead, they turned their attention to tea, and so the fate of Sri Lanka lurched in an unexpected direction. Today, Old Ceylon remains one of the world’s largest tea exporters.

By national standards, Handunugoda is not a large plantation, but sizeable warehouses are needed to store, dry and separate the crops all the same. Much of the equipment inside was manufactured in “Belfast, Ireland” over 140 years ago during the first tea boom, and somehow still chugs away in the shadows.

Herman worked for British tea companies for almost 35 years, at one time managing 100,000 acres for them. They gave him employment and training; they also left a colonial mark on his wonderfully archaic inflection. Phrases like “hoisted by my own petard” and frets of “untidy goings on” fill the conversation. I find that, despite the cartoonish show he puts on to scare his employees, I really enjoy listening to Herman talk, regardless of the topic. (It’s almost always tea.)

But, like most Sri Lankans of a certain age, his relationship with the UK has been, at best, complicated. The land on which his tea plantation stands is generational, first coming to his great grandfather who was sold it at a reduced rate for growing rice to feed the British army. Until 1974, Herman’s family had 1,200 acres, then the British decided that they wanted 1,000 acres back and almost overnight what had been in his family for 160 years all-but disappeared.

“Did they just come and take it?” I ask, a little embarrassed by my passport. “No, they gave us compensation,” says Herman with a wry smile. “Well that’s what they called it – others might have called it something else.”

His father used the land to grow rubber and coconuts, which is hardly surprising as the trees seem to pop up like daisies in Sri Lanka. But when the land came to Herman he decided to turn to what he knew. For the past 17 years has been producing over 20,000 kilos of tea a month, comprised of more than a dozen different varieties, all of which he personally tastes for quality assurance. These days his morning walk of five miles around the plantation brings him a “great sense of contentment” as well as a chance to berate any staff members not toeing the line.

We meander to the southern side of the property and up to Herman’s house which oversees production below. He orders the “boy” to bring out cake and two cups of his cherished Virgin White. “For goodness’ sakes, please don’t follow that curious British habit of adding milk,” he says, leaving me genuinely unsure if he’s joking.

Herman has told the story of how the tea came about a hundred times before. It’s familiar and comfortable, like a favourite pair of shoes. During the fifth and sixth centuries, Chinese mandarins employed virgins to harvest a rare tea. The servants cut the leaves with golden scissors and caught them in golden bowls before they were brewed and offered in tribute to the emperor. The tea was said to be perfect and pure and the only thing that ever touched it were the emperor’s lips.

“At first I thought it was a nice story, but nothing more, I had no notion of copying it,” says Herman sipping from his cup. “Besides, if I’d run around telling people I was looking to employ virgins, they’d have thought I had bats in my belfry!”

Some time later, Herman met a professional nose in France. The perfumer was sitting with 15 jasmine flowers from 15 different countries and claimed that he could identify them individually by smell. He explained that when something is harvested by hand the diet and subsequent sweat of the pickers very slightly, though inevitably, taints the crop. Herman thought: if that’s true of jasmine, why shouldn’t it be true of tea?

He returned to Sri Lanka and decided to blind test himself with tea that had been harvested traditionally, and that which had never been touched by human hand. He says he could immediately tell the difference, which, in a country with a diet as spicy and pungent as Sri Lanka’s, I find quite believable.

Thus he set about making Virgin White tea a reality, harvesting the fragile crop with gold-plated scissors used by women wearing delicate cotton gloves. His only variation on the legend was that he didn’t enquire about the sanctity of his employees.

The tea – and its wonderful story – was already highly marketable, but input from the Middle East sealed its position as a world beater. Scientists from the Oman’s Sultan Al Qaboos University in Muscat asked to conduct a chemical analysis of Herman’s tea. They found it to be packed with antioxidants which was such a powerful buzzword a decade ago that the price of the tea immediately ballooned.

Before long, the revered Mariage Frères teahouse of the Champs Elysees was offering to import it to Europe, driving costs higher into the stratosphere. These days, Virgin White has made its way to British shores: a pot of Sacred White, as it is now being marketed, is available at the Kitchen restaurant in Manchester for £25.

With such a price tag in the middle of a financial crisis, it seems the tea may well have some magic properties. “When times are good, people drink tea; when times are bad, they drink tea. It makes no difference,” shrugs Herman. But, for him, the type of tea is hugely important – he is an unapologetic snob on the topic. For example, when I ask what he thinks of teabags, he laughs at the notion: “Well, would you eat a piece of cake with the wrapper on?”

And what of the Virgin White? Its colour is a light gold and does indeed have a crisp, pure taste, but though I’d never admit it to the great man in front of me, my uneducated palate finds it pretty unremarkable – bland, almost. Nonetheless, Herman estimates that he drinks at least 10 cups of it a day, the health benefits from which possibly offset some of his chain-smoking. As we stand up to conclude the tour, he explains that a particular low-caffeine, sub-species of leaf is selected to give the tea its distinct “whiteness”, although he refuses to actually name it.

When it’s time to return to Mirissa Hills, Herman puts me into one of his Jeeps, but not before giving the driver a strong rebuke about obeying speed limits. “My regular boy is away at the moment,” he says, “and I’m not too sure about this chap.” I look down, suppress a smile and hold the door open for the boss.