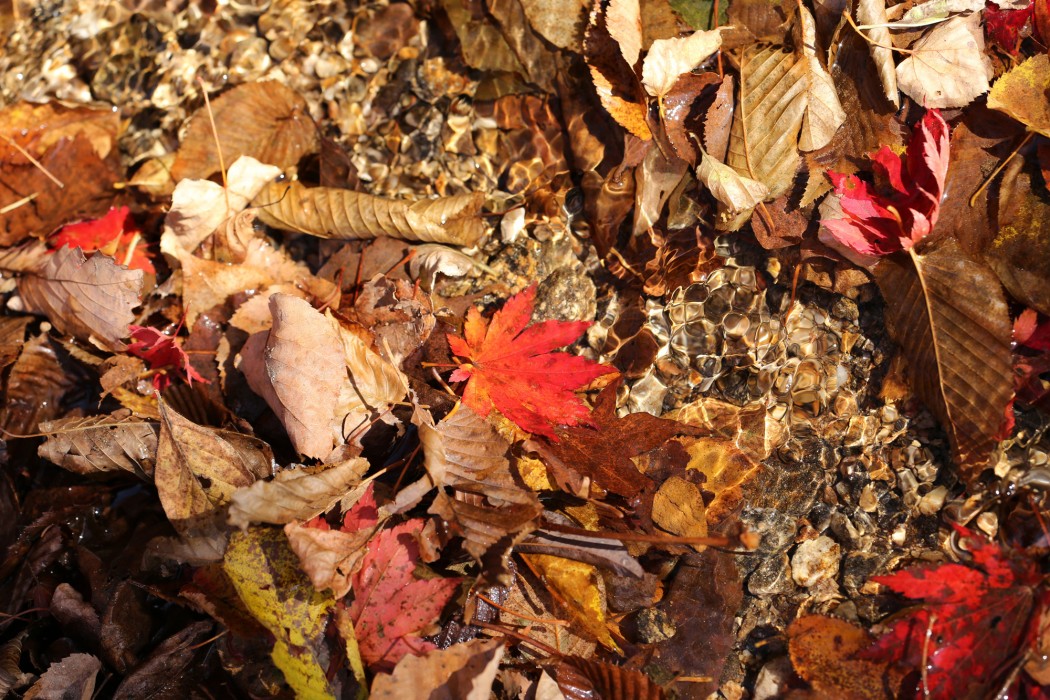 As it has grown apart from ye olde English, the American version of the language has lost much. Surely one of its most tragic casualties is that gentle waltz of a word, autumnal. Autumn, autumnal, autumnally… they are, to me, some of our most elegant words, evoking a far deeper sense of time and place than the comparatively basic “fall”.
When I hear the word autumnal, my mind drifts to a scene of vibrant colour and the sound of dead leaves crunching underfoot, of the smell of woods after rain and the taste of late season berries. It has always been my favourite time of year, but now, having been to South Korea during its spectacular autumn, when vast national parks are transformed into rolling seas of red and orange and gold, I have a new understanding of just how wonderful it can be.
Starting in colossal Seoul and heading east to Seoraksan and Odaesan national parks, I spent a week tracking the changing foliage, which had barely started in some places and was already finished in others. But the great swathes in between, the kilometre after kilometre of garishly combusting trees, those were autumn at its most brilliant – and they brought out fellow leaf-peepers in their thousands.

Bukhansan National Park
Bukhansan National Park is not, technically, a city park – not in the same way London’s Richmond or New York’s Central are. By comparison, those are quaint little gardens, while Bukhansan is something altogether wilder. Forming the northern border of Seoul, from the new Four Seasons hotel it’s just 15 minutes and KRW10,000 (US$9) in a taxi to the park’s entrance – a bargain for what may as well be a step through the wardrobe and into Narnia.
Despite its proximity to Seoul city centre and its 10-million-plus residents, a few moments after passing into Bukhansan the drone of the mega city drops away and the air becomes immediately clearer. The only obvious sign that I’m near humanity is the sudden presence of a humongous ginger cat, fat with chipmunks and other forest creatures. He looks at me with that deep feline apathy, then slides off into the undergrowth to find his next meal.
Striding into the park also allows me to feel as though I’ve finally found Korean autumn. On arriving into Seoul a couple of days previously, an Indian Summer had been insisting the trees stayed stubbornly vital. At street level in the capital there was little hint of the season, and I could feel my face turning every shade of an autumnal maple leaf, starting with a furious red, regressing to a nauseated green.
Unseen and unfelt forces – at least by this foreigner – mean that things are quite different in Bukhansan at just a few hundred metres higher altitude. While it’s true that the foliage has not peaked, the various maple, gingko and oak trees seem in disagreement about when is the right time to strip; the park is formed of some fairly vertical ridges which channel air and sunlight in strange ways, meaning trees just a little distance apart can appear to be at the very start or end of the season.
The ridges also provide a stiff hiking challenge, with paths following ancient-looking broken boulders, stone staircases and trampled dirt. It’s hot work, even in the cool mountain air, and by the time I finally get to the top I’m both amazed and slightly embarrassed to see that not only is this a well-trodden path, but that an entire fortress has been assembled up here long ago by people far hardier than me.
Bukhansanseong was built in 1711, though it’s in such good condition it looks as though it could have been finished at 17:11 yesterday. I decide to traverse along the top of the fortress, following its mighty wall, stopping often to take photos of leaves, more frequently to catch my breath. The most amazing vista, though, comes when I scramble to the top of one of its 16 gates. There, stretching to the silent horizon is the writhing mass of Seoul. I’d forgotten it even existed.

Seoraksan National Park
When the zombie apocalypse comes, know this: the people of South Korea are ready. Over a weekend during the peak of autumnal foliage I am awed by their preparedness. Thousands of people take to the forests as though they’ve heard that the first wave of undead has engulfed Seoul. Subsequently they are kitted out with enough gear to survive until humankind’s inevitable resurrection: there goes a man wearing a bear-bell; here is a lady wearing a hard hat. Eighty percent of the masses carry sharp hiking poles, for balance today; for piercing a rotten zombie eye tomorrow.
Seoraksan, 150km east of the South Korean capital, is popular with visitors throughout the year. They come for the dramatic peaks, pure waterfalls and testing hiking, but in autumn they have the added bonus of some of the world’s very best seasonal colours framing it all. Seoraksan is not a secret, this is not off the beaten path, and as I arrive on a weekend, it is probably the busiest day of the year.
Many of the elderly guests are bussed in, arriving in large groups, the leaders of which corral them at the bottom of flights of stairs and lead them in elaborate stretching exercises. From there, progress is slow as hundreds of people attempt to clamber up the slopes at the same time. To try and ease the traffic, the park has insisted that the four-hour course I choose in the south of the park runs one-way, but this does little to ease the sheer weight of numbers.
During the standstills, I spend my time marvelling at just how committed the Koreans are (I don’t see another foreigner all day) to their pastime. People wear brands like The North Face and Columbia as though they were magical garments infusing them with superhuman levels of energy and indefatigability. In reality, the millions of dollars’ worth of gear may only be making fractional differences on an almost imperceptible level, but there’s nought so powerful as a placebo so it’s surely worth every cent.
And besides, on the moments when it does clear up and we can open our strides, I am frequently passed by hikers old enough to be my parents or grandparents, simultaneously more nimble and durable than me. They have all the gear, but perhaps, in my cumbersome jeans and flannelette shirt, it’s me who has no idea.
It’d be easy to get annoyed trying to hike through Seoraksan under these conditions, but the park offers wonderful compensation. As well as the autumn leaves, the landscape covered in over 1,000 types of plant, all fighting for space in the deep ravines and gorges, but unable to find a hold on the bare Mordor-esque peaks which poke out like a huge rocky crown. A national park, biosphere reserve and tentative UNESCO World Heritage site, this place offers plenty of distractions from the masses, so long as you remember to look up.

Odaesan National Park
The following morning my legs are whimpering, pleading for some kind of mercy, but with limited time in Korea, I have little option but to ignore them and get to the next national park. Less than 100km south from Seoraksan, Odaesan doesn’t quite carry the same reputation – or crowds, I hope – as the parks which have gone before it.
Designated in 1975, it too is home to thousands of species of mammals, birds, insects and, of course, trees. Yet approaching the park entrance, it’s clear that it’s no less populated, and as I swap my car for a local bus in order to reach Sangwonsa Temple, the starting point of my hike, traffic grinds to a halt. After half an hour of going nowhere, I abandon the vehicle and take to a path instead. With 6km still to go to the temple, my plan for the day has to change – Sangwonsa will be my destination, not my origin.
There’s not much in the way of English signage in Korean national parks, but that matters little when there are so many people to follow and when the scenery repeatedly tells you everything you need to know. Despite being farther south now, autumn seems to be already reaching its conclusion. There are a million crunchy leaves underfoot, and each time the wind blows, the forest shivers, sending more fluttering through the air.
Thankfully, the path to Sangwonsa doesn’t follow the road, but a shimmering river that runs under arching maple trees forming a crimson tunnel.
It’s an emotive scene, and as the crowds thin out, I come across a woman standing alone, staring at this regal stream and those deep reds. She’s turned away from me, totally still and it would be understandable if she was crying at the beauty of it all. With this in mind, I’m careful not to disturb her as I edge past, but the moment is ruined anyway as a pensioner, a hiking pole in each hand, strides past, with Carl Douglas’s “Kung Fu Fighting” blaring from a personal radio.
Some hours later, I get to Sangwonsa. To add to the fiery palette surrounding the building, monks have planted some of the very reddest maples in front of the outer gate, and more inside. Home to national treasures and no small amount of history at any time, autumn represents this 1,400-year-old temple’s busiest period. I stop to take more photographs, my legs throbbing, but my memory card is already full, so after a couple of deep breaths, I turn to head back down.
The queues for buses to the car park snake back into the trees and I know with a quick glance that I won’t be able to catch one before the park shuts. Instead I start walking back to my car, another 6km down the hill. I try to ignore my trembling knees as I set off, but I only get a couple of hundred metres when a car stops and two locals, with not a word of English between them, insist that I jump in. I’m far too tired to decline.
At peak leaf-peeping time on weekends, Korea’s national parks understandably attract a lot of people – too many people – but as I’m handed a fresh piece of persimmon, with a smile, a nod and some words I don’t understand, I’m grateful that I’m not alone.

A version of this piece was published in Etihad Inflight in November 2015.