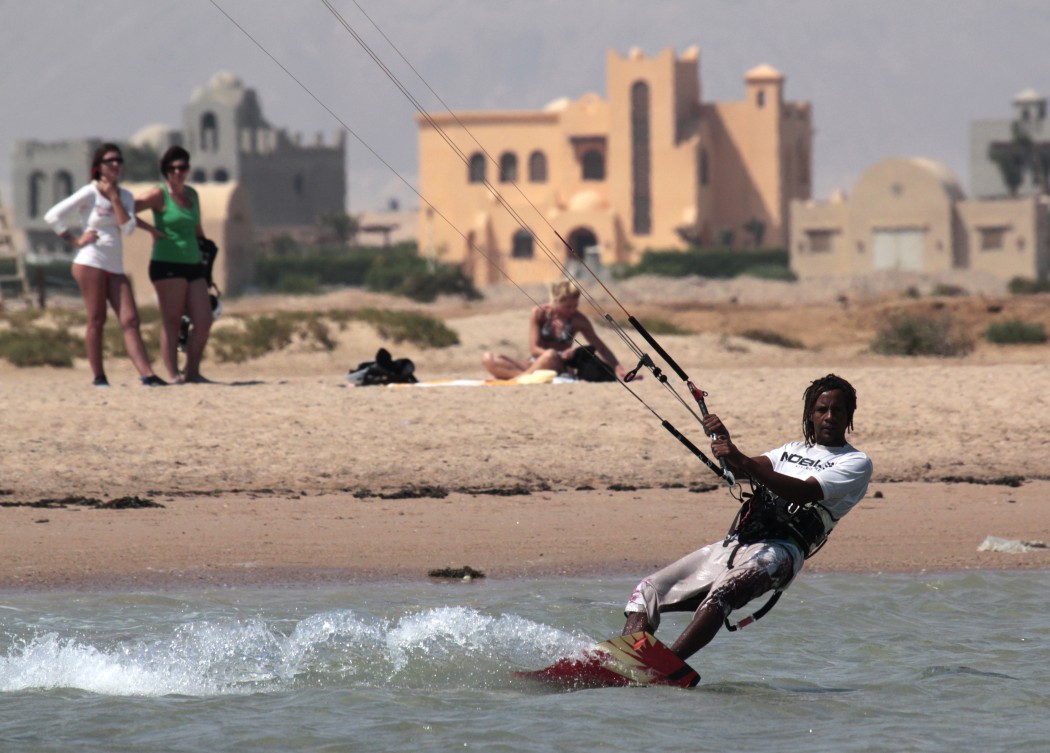 The Winds of Change

I am sitting in a restaurant, in coastal resort of El Gouna, Egypt, watching a flock of huge tropical birds hovering over the Red Sea. Most of them have enormous, multi-coloured wings that droop only slightly at the tips, harnessing as much of the wind as possible. Their flight paths wax and wane, soar and swoop. Although there are a few near misses, and though they don’t seem to have too much space in this small patch of blue sky, there are no collisions.

It’s a hypnotic spectator sport, made all the more soporific by the warm breeze coming off the sea, so it comes as something as a surprise when one of those garish harpies slams into the water’s surface with a loud bang. That kind of calamitous clumsiness can only be the result of human error.

El Gouna is one of the world’s most reliable destinations for kite-surfers, the little people being dragged hither and yon by the great wings above. Before the resort was developed by the Orascom group in the late 80s, it was nothing but a patch of desert by the sea. Minus any history or culture, and, in truth, light on any real natural beauty, El Gouna, with its low, beige concrete buildings and man-made waterways, was only ever going to appeal to a certain type of tourist – at least until the kitesurfers found out about it. The sea is generally calm, the wind often steady and the sun is almost always shining, all of which was music to their ears – especially the thousands who arrive here from chilly Northern European countries.

I’m one of them, but unlike most of the rest of the sport’s eager participants, I’m starting from scratch. Cosha Ebead, an instructor with the Red Sea Zone kite school, will be my chief tormentor and sometime educator for the next few days.

Kitesurfing, for those unfamiliar with it, is somewhere in the middle of a Venn diagram with wakeboarding, kiting and the unending human fascination with flight. The goal is to stand on a plank a little larger than a snowboard, then harness the wind through a giant kite to drag you first into a standing position, then, with a little adjustment, have it propel you across the water.

The first day’s tuition is all about feeling the power of the wind through a junior kite attached to a harness around the waist. For this first session, we won’t even make it to the water, just stand on the shore trying to control our little wings by holding onto a steering bar. This small kite is a speedy, jittery customer prone to panicky movements like a frantic housefly. “If you can master this, the big kite will be no problem,” says Ebead with booming confidence seconds before I slam it into the dusty beach.

A combination of my chronic ineptitude and a dying wind make this first day a pretty dispiriting experience, but Ebead tries to encourage me, insisting that it’s difficult for everyone first time around. After a few hours, with the wind almost gone completely, we decide to call it a day. As we walk back to Red Sea Zone it’s almost still. On a different kind of day, I wonder if the wind can become too strong?

“Listen, everything is easier when the wind is blowing,” says Ebead. “Recovering the kite is easier, jumps are easier, crashes are easier…” Even so, for the professionals more wind essentially means more fun – it’s the lack of wind that can be a real killer.

Before arriving in El Gouna, I’d read about Jan Lisewski, a (presumably mad) Polish kitesurfer who decided it would be a good idea to try and traverse the Red Sea, all the way to Saudi Arabia using his kite. Things started well on the Egyptian side, but just over half way across the wind died and he was forced to fashion a raft from his board and kite wings. Before long, his bright colours and thrashing attracted a shiver of sharks with a strong desire to do what sharks do. The Pole was forced to spend much of the night stabbing at the fish with a diver’s knife to prevent them, as Herman Melville put it, “smackingly feasting on his fatness.” Once the sharks finally gave in, he spent a total of 40 hours adrift until the Saudi coastguard eventually picked him up, near dead through dehydration and exhaustion.

Cosha recounts this story back to me after the first day’s lesson, shaking his head through most of it in a mixture of disgust and disbelief. To add to the Pole’s long list of follies, he’d sought permission to enter Saudi Arabia, but hadn’t bothered to let anyone in El Gouna know – nor the Egyptian authorities.

“It happened just after the revolution, so it was really a bad idea,” says Ebead, slowing his voice to emphasise how idiotic he thought the whole episode was.

“How were things in El Gouna during the revolution?” I ask. Ebead doesn’t really know – he was in Cairo recovering from knee surgery or, as he puts it: “Running around Tahrir Square with my crutches in the air.”

As I find out from a few other kitesurfers, things in El Gouna were a good deal more sedate. Amr El Seyd and Mohamed Hosny, or Nemo and Momo as they prefer to be called, have been living and kitesurfing in El Gouna for over seven years. They are similar heights, have similarly powerful builds, and appear to share a razor to shave their heads. Both men are largely self-taught boarders but are now two of Egypt’s best and when I spoke to them, were hopeful of going to Rio for the 2016 Summer Games, when kitesurfing was scheduled to debut as an Olympic sport. Sadly for the Egyptians, it has since been dropped.

When Momo gives his students safety advice at the Kite Power station, he speaks as someone who has shattered both ankles when his board stuck in the sand too close to shore; as someone who broke ribs when catching too much air out at deep water.

“No one ever showed me what to do. One day I was working on the beach, helping to launch kites and some American guys said ‘Hey Momo, you wanna try?’ And they attached me to the kite and – whoosh!” He says, shooting his hand out to sea. “Going was never my problem – stopping was.”

According to him and Nemo, the winds of change whipped up by the Egyptian revolution barely touched El Gouna. Hundreds of miles from Cairo, with a population of mostly affluent expats, by the time the Egyptians fully understood what was happening in the capital, the communication lines were cut and then it was over. Yet El Gouna began to empty in a hurry – the tumult was enough to put people off coming to Egypt as a whole.

“For six months it was a ghost town, but now it’s getting better,” says Nemo. “People see that the Red Sea is far from Cairo and the problems were mostly there. Down here, there were no problems.”

Perhaps unsurprisingly, the kitesurfers were some of the first people to come back to El Gouna. What’s a little political unrest when there’s a gnarly breeze on offer?

As I head into the water on the second day and third days, now to take charge of a much larger kite, the tourist numbers seem to have rebounded completely – the vastness of the sky is almost occluded by kites. Being attached to this 14m-wide kite is different and daunting in an entirely new way, but at least the bigger wings move a little slower, like a swooping condor, compared to the skittish, unmanageable blackbird I was tethered to previously.

It’s never easy, learning to kitesurf, but the fun is in the challenge. What looks like an innate talent for the likes of Cosha, Nemo and Momo, is actually a very precise balancing act: harnessing a raw element, finding your feet in the board, then zooming off out to the great blue beyond, hopefully not crashing into anyone else en route, nor being gobbled up by sharks. On the third day, for the most fleeting of moments, I actually manage to stand, the roar of the ocean dropping away for an unforgettable second or two as my board skips across the water.

By far the hardest trick is going from a prone position in the water to standing on the board – that requires whipping the kite into what Ebead calls the “power zone” with such force that it hauls you upright. The natural movement is to pull the bar that controls the kite, to try to haul yourself up, but that only decreases the torque and your chances of standing. Instead you must trust the wings and let the invisible might of the wind do the work.

“Jamie, Jamie,” says my tutor when I’ve failed for the umpteenth time. “Relax man, feel the kite – use the power. Feel the power!”