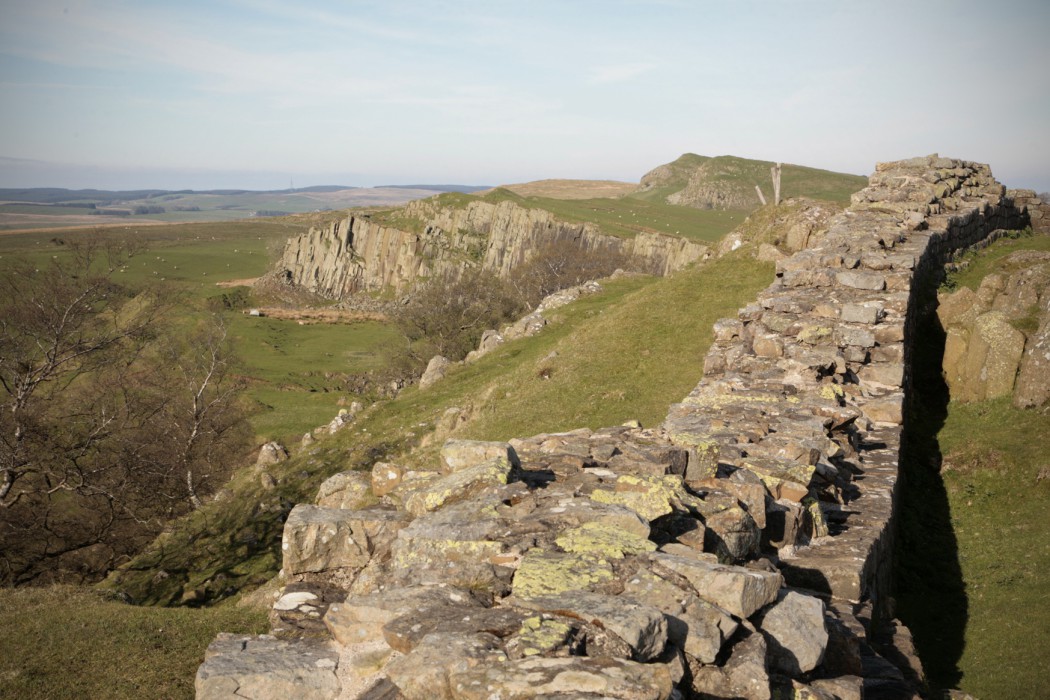 I grew up north of the Wall, where we speak with broad accents and it’s often cold. To the south it’s warmer, drier and people tend to speak clearer. So in the Game of Thrones world, that would make me a wildling and York would approximate to Winterfell. King’s Landing, the sprawling southern capital, is extravagant beyond its means and more than little incestuous. Where it might represent is anyone’s guess. But the looming, iconic Game of Thrones Wall? According to author George R.R. Martin, the Wall has always been the Wall.

“Certainly it comes from Hadrian’s Wall,” he said in the year 2000 as the third book in his best-selling series was launching. “I stood on [it] and tried to imagine what it would be like to be a Roman soldier sent here from Italy or Antioch. To stand here, to gaze off into the distance, not knowing what might emerge from the forest.”

I’m standing just behind one of Hadrian’s Wall’s most complete sections, at Housesteads where a brand new museum has just been opened by English Heritage. As a fierce wind nails my face into my skull, it’s impossible not to get that same feeling that I’m on a great frontier and that the sparse land beyond is somehow wilder and poorly understood and not Northumberland National Park.

Martin’s epic fantasy stretches far beyond the Roman reality of Hadrian’s Wall – at its highest it was only about 14 feet, compared to over 300 in the books – but it does occasionally dip back towards our history. As is the case in Game of Thrones, those the Romans sent to the Wall were very rarely from Rome; at its peak, in the 3rd and 4th centuries, it was manned by 10,000 troops assembled from regions we today call Germany, Spain and Syria.

But unlike the fiction, it was never designed to be an impenetrable barrier. “Why would you put a gate every mile if you didn’t expect – didn’t want – people to go through it?” asks Tim Padley, curator of archaeology at Tullie House Museum in Carlisle, as though I should know better. So why build it at all then? To keep ancient Brits in? To keep northerners out? To segregate them? To symbolise the power of the empire? These questions are all asked inside Padley’s Roman exhibition, with modern examples of Berlin, Gaza and Cyprus highlighted to make visitors – especially school groups – think more about frontiers and barriers. “Of course, then there’s a school of thought that Hadrian just liked straight lines on maps,” says Padley. “There are no definite answers.”

Whatever the reasoning, it seems taxation was an important function. Hadrian’s Wall, with all its gates and checkpoints, was likely the world’s biggest toll booth, lightening the purses of all who passed through it. The profits were needed to help to pay the legions that garrisoned Britain until 410AD when the island became a luxury the Romans couldn’t afford and they began to withdraw.

These days, large sections of the Wall have disappeared completely, in no small part because of local pillaging of its sturdy, pre-cut bricks. Even noble-sounding buildings like Lanercost Priory, built in the 12th century, are made largely of wall stone. Worse, there are large sections of what remains that are officially regarded by English Hertiage as “at risk.”

A World Heritage site for the last 25 years, Hadrian’s Wall is a difficult beast to manage. Its fragmented ruins aren’t found in just one location, but several, with various bodies, local authorities and land owners required to pull in the same direction to ensure its survival. Even with that effort, there’s no getting away from its extreme age, nor the hundreds of thousands of visitors it receives every year, numbers that have only increased since the cult of Game of Thrones turned global.

In order to try and protect it, there’s a new scheme to rebuild the Wall. “Not rebuild, definitely not rebuild: consolidate,” says Bryan Scott of Hadrian’s Wall Heritage, hastily correcting me. It’s estimated that over £500,000 is needed to do the necessary work, part of which will be funded by a new online project (www.rebuildthewall.org) that gives people a chance to buy a virtual brick for £1. The price has inflated considerably compared to the start of the 17th century when Queen Elizabeth I considered rebuilding the entire thing before baulking at the quote of £8,000.

As one of the main preservation bodies, Hadrian’s Wall Heritage is constantly looking for ways to promote its monstrous baby, an often fraught challenge given they’re managing what is ultimately a scattered collection of 2,000-year-old bricks. In 2010 they helped to organise the Illuminating the Wall project which saw flaming Lord of the Rings-style beacons lit along its entirety. That was repeated again in June as part of the Queen’s Jubilee celebrations and from 31 August – 1 September, a new spin on the theme will see gigantic weather balloons flown over each of the mile gates, lit in different colours as part of an ambitious installation by New York artist Zach Lieberman. If all goes well, it’ll be a sort of technicoloured belt across the width of the country.

But soon the Wall won’t be the only needy behemoth in the north east. Nine miles north of Wallsend, on the outskirts of Cramlington, lies Northumberlandia, a titanic figure of a prone woman. Built by designer Charles Jencks with material removed from the Shotten surface mine, she is a colossus: 400m long, her forehead will be as high as the Statue of Liberty is tall.  She’s very near completion, but her unveiling will depend on the thus far calamitous weather improving, the ground settling and the flowers and grass that will cover her immense body coming into bloom. It’s hoped she will be open this year, but 2013 looks more likely.

Whenever Northumberlandia debuts, she will be represent a huge community art project, with over 6km of paths leading over and around her figure, through her record-breaking cleavage, and over to her giant finger which points south west. Jencks hasn’t said what she’s pointing to but, perhaps coincidentally, it’s in the direction of Hadrian’s Wall. The end result is something that looks like the work of an ancient Incan tribe, rather than a contemporary piece – like something that’s been discovered, rather than constructed. If somehow history were deleted, or if humanity again fell into an extended period of ignorance and apathy, like the Wall a few miles south, Northumberlandia would remain. And future generations would wonder: why? Why go to some much trouble to build something so huge?