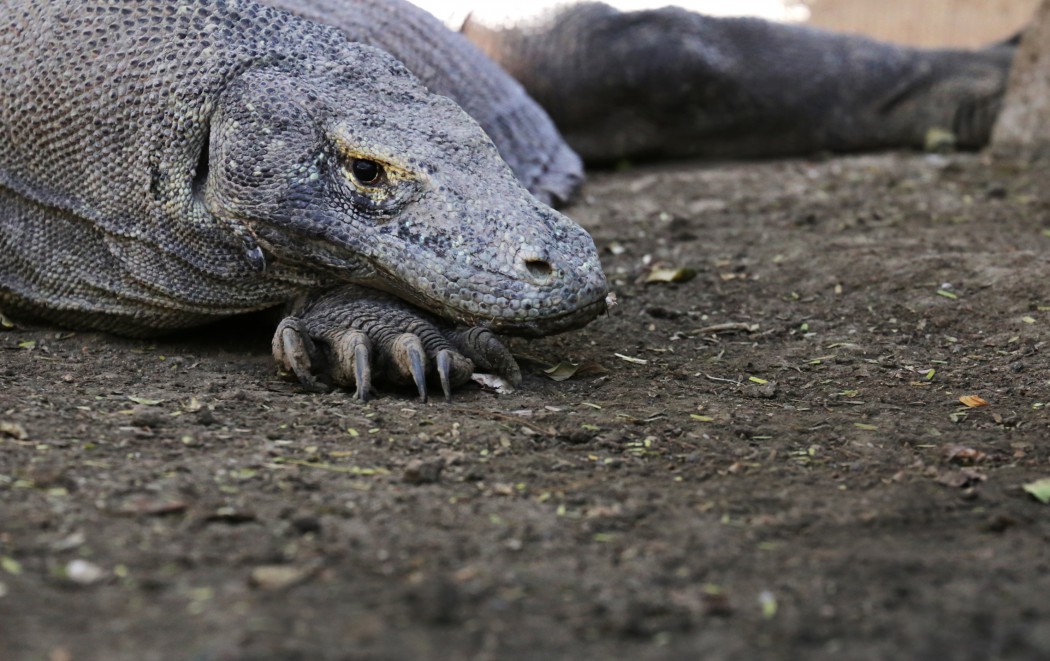 The Tiger and the Dragons

Once upon a time, there was a dragon with a broken heart and a broken leg. The injuries were related and most people thought the latter was the more severe. The dragon didn’t agree. He’d injured his leg fighting for his true love and every day during that hot July he thought about winning her back. A year later, he had the chance. He roared into battle, proud and determined… and promptly had another leg broken by a younger, fitter suitor.

The dragon with the broken heart and two broken legs was a sorry sight, so much so that even though he normally terrified people, some local villagers on the island of Rinca took him in, feeding him and making sure he had water. With their help, he lived for another year, finally dying having found love of a different kind. The end.

In seven days in Indonesia’s Komodo National Park this is the only even vaguely pleasant story I hear about the world’s biggest lizard. They are not romantic. They are not kindly. Komodos don’t hunt like the dragons of lore, instead biting with force, poison and a hideous anticoagulant. To be bitten by a Komodo dragon is akin to pouring a Petri dish of 50 virulent bacteria into a gaping wound that will never heal. Their prey must wish the dragons were breathing fire – a bite leads to a prolonged infection and an agonising demise. The buffalos, the horses, all the things eaten by this apex predator, they die hard.

Dry season coincides with the dragons’ mating season; waterholes shrink, females become scarce and soon violence is inevitable. I visit Rinca just before the worst of the prehistoric lizard-on-lizard fisticuffs and instead see what most people see when encountering a Komodo dragon: very little. They say these cold-blooded giants can run faster than a man and swim faster too. They say they can climb trees and that, if the lizards fancy the cut of your jib, there’s really no escape.

People say a lot of things. In truth, only the babies can climb trees, and even then it’s mostly to avoid cannibalistic adults. Running and swimming require vast amounts of energy and, like most lizards, they find doing nothing preferable to just about anything else. Led by a ranger, I spend a morning trekking a predetermined route around the island, only really seeing dragons close to the park’s entrance and the on-site kitchen, the smells from which draw them in from far and wide. The rest of the trail instead hosts other life: a deer squealing as it runs up a hill away from us, squadrons of butterflies fluttering hither and yon.

From the hike’s highest point, Rinca’s parched hills roll away towards a calm bay. Tiger Blue, the ship that brought me and seven shipmates here from Labuan Bajo, is anchored the middle like a floating plug in a bathtub. For Tiger Blue, the stop to see dragons is just one excursion among dozens during a week-long cruise around a handful of Indonesia’s 17,000-plus islands. The eight passengers came on board for different reasons, but most are united by a love of SCUBA diving. Sadly, I am not licensed, which initially makes me feel as though I will spend life on board being left behind, pretending it doesn’t make me furious with envy.

As it turns out, the snorkelling is as rich and incident-packed as the diving. Day after day, I see just as many hawksbill turtles as the divers, and without any heavy equipment, I can swim to beaches, over ridges of coral and onto bleached sand. One morning I find two baby blacktip sharks in the shallows, waiting for me like impatient lifeguards.

An almost all-wooden boat, the 10m-long Tiger Blue is a two-mast Indonesian phinisi, with grand burgundy sails that can be unfurled to give her the swashbuckling look of a ship navigating barbarous waters.

I can’t decide whether I feel impressed or cheated when I find out that in fact she isn’t yet eight years old. During his two decades as a merchant seaman, the great Polish-British writer Joseph Conrad would have passed boats a lot like this. He sailed these waters in the late 19th century and would later use Indonesia as the inspiration for several stories. It’s impossible to say what, if anything, has changed around here since those days.

Then, as now, time passes slowly on board, though not because we’re idle. There’s diving, snorkelling, fishing and options to try water sports. We make landfall to have barbeques on pink beaches and cocktails under the stars. The long days, like our bellies, are full.

Half way through the trip we drop anchor in a secluded bay in east Padar, somehow contrive to have a fruitless fishing trip in the most bountiful waters I’ve ever seen, then spend a slightly more productive hour water skiing and wakeboarding. The national park is full of natural things, sometimes intimidating, often beautiful. For me, water skiing is neither of those things, but while I flounder gracelessly in the waves, others glide across the water like low-flying birds. My unbridled enthusiasm, it seems, is no substitute for genuine ability.

The following morning, we head south out of the bay and into the Indian Ocean. Beyond there is only the wild island of Sumba before the vastness of Australia. Now in open water, Tiger Blue is buffeted and rocked in a way that hasn’t happened previously on this journey. To everyone’s surprise, it’s now that the captain orders the sails to be opened. We are Ahab’s Pequod; we are Marlow’s Nellie. At least for a minute or two – unluckily for everyone, the moment the sails are up, Neptune stops bellowing and the wind dies.

Sails aside, the 10-man crew works tirelessly to make sure our experience is as pleasant as possible. The general maintenance of the ship would be challenge enough, but we’re served three fine meals a day as well as snacks and drinks any time we desire. After each dip in the ocean we’re given restorative fruit juice and hot towels to wipe away the salt of the sea. The focus on our comfort is almost embarrassingly attentive.

Every crew member is deserving of praise. They are: Indra, Ardi, Anto, dive masters Jessie and Adrian, Rudi the chef, Rudi the engineer, Tony and Toni. However it is Rizal who quickly becomes everyone’s favourite. He performs many roles on board, from frontman of the ramshackle Tiger Blue Band to our snorkelling guide. The Sumatran has a face made of horizontal lines: lines at the corners of his eyes and mouth, lines the width of his forehead, a fat line for a moustache. When he smiles, which is often, the lines reconfigure themselves, turning this way and that to make a picture of weathered joy. This in turn makes everyone else smile and it is mutually profitable to make sure Rizal is having a good time.

The 45-year-old is lithe but strong-looking, as though every calorie he ingests is essential. He is a dedicated man of the sea, in and out of the water, with decades of experience that have given him what we foreigners quickly take for a sixth sense in spotting sea life. Experience has also taught him to carry a pink diving knife for every swim. “For sharks?” I ask. “No, bumphead parrot,” says Rizal, making biting and squealing noises, motioning that one of the beaked fish once had a peck at him. He smiles at the memory, and so do I.

Rizal’s job as my snorkelling guide is made easier by a moratorium on fishing inside the national park. The biggest beneficiary of this is, quite literally, the manta ray, several of which have taken up residence here, safe from poaching. (Though not widely eaten, like many of the planet’s great creatures, they are occasionally killed for bizarre Chinese medicines which do not work.)

But Rizal cannot guarantee we will encounter the winged giants, not even the day we visit the promising-sounding Manta Point. Well briefed for disappointment, we take to the water and expect little, especially as visibility is under 10 metres. The sheer enormity of the ocean makes a chance meeting improbable.

Within a few minutes of being in the water, Rizal points at a swooping, swooshing shape – a spotted eagle ray, over a metre wide, with a distinctive pitbull head and whippet tail. It passes swiftly beneath us, utterly apathetic to our presence.

Half an hour or so later, Rizal seems to want to call it a day. The sea bed at Manta Point is fairly barren and, without any significant sea life, quite boring. We’re almost punished for our impatience but thankfully I spot a black and white shadow shifting somewhere below. The wingspan of a manta ray can be double that of the wandering albatross; if they could take to the air they would rival the biggest of the pterosaurs as the largest flying things of all time. They are filter feeders which, considering their size, is probably a good thing; this 3m-wide specimen may be relatively petite but is a fearsome sight nonetheless.

Back on the boat, cruise director Boum Senous is happy for us, though perhaps a little envious too. A fanatical diver, the Belgian has spent most of the week frustrated on deck, a shoulder injury preventing him being as active as usual. Instead of leading dives, his biggest chore has been keeping his own spirits up, as well as those of his crew. Good camaraderie is his primary concern and, given how long they have to spend together at sea, his sailors are selected chiefly on their personalities. The result is that they can look after tourists, no matter their interests, and appear happy doing so.

“Tiger Blue isn’t a diving boat, here you can do everything and we have to be ready for that,” booms Boum. “Diving is one of the things we propose, but it’s not like we have a tight schedule doing four dives a day every day.” Impatient to heal and contrary to his doctor’s orders, he offers me the chance to join him on an experience dive, a non-certified outing that teaches a few basic skills while giving total novices the chance to try the SCUBA gear. Even though the 36-year-old is going against sound medical advice, I’m too selfish to turn him down.

As we board the dingy to give it a try, Rizal comes out on deck, half-dressed in his wetsuit. No one has told him that we are leaving him behind and the lines of his face droop down in a portrait of misery. When we untie the ropes and begin to drift away from the Tiger Blue, he protests, shouts “Oh my god!” and jumps into the water, only for the captain to start the propeller and blow him away from the boat. Rizal spins around in the waves, squealing and laughing and pleading for someone to rescue him, which his shipmates agree to do, once they think he’s learned his lesson. As we putter off to fall beneath the waves, I watch Rizal and find myself again thinking of Joseph Conrad: “For all the celebrations it has been the object of in prose and song, the sea has never been friendly to man,” he wrote. “At most it has been the accomplice of human restlessness.”

A version of this piece was published in Etihad Inflight in August 2014.