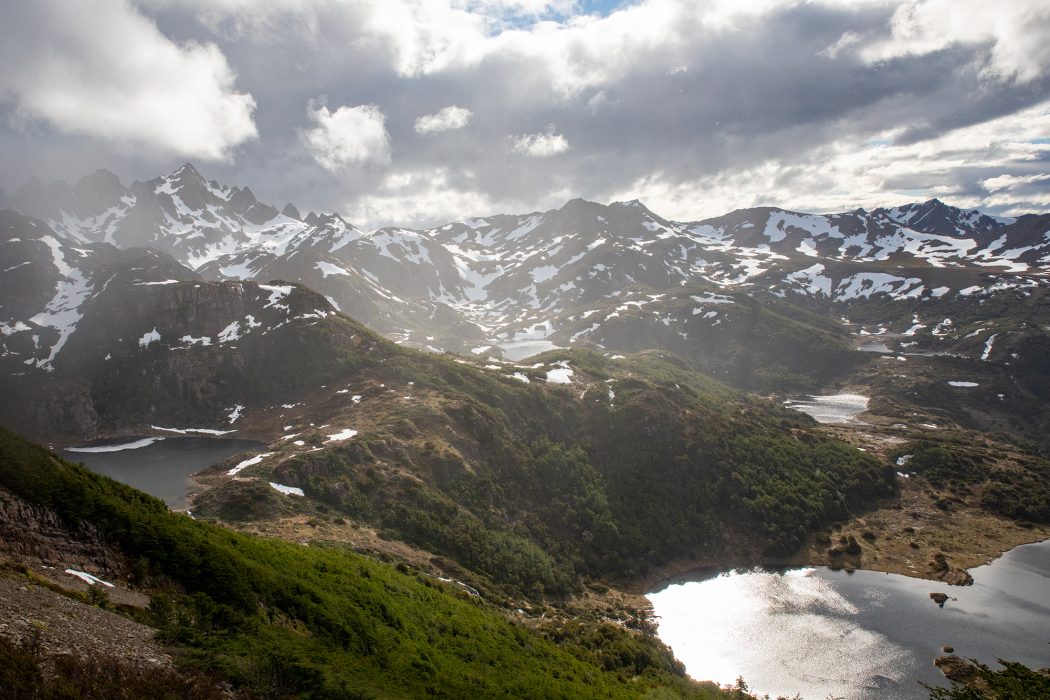 Often in Patagonia, you see the wind before you hear it or feel it. On water, white horses have their manes torn out with such force that the surface appears to be smoking. On land, howling gales rip dust from the surfaces of unsealed roads.

On the morning my group is to fly from Punta Arenas in Chilean Patagonia to Navarino Island, these lunatic winds are so aggressive that our little plane feels like it’s flying through an area of dangerous turbulence, even though we’re still on the runway.

Navarino lies on the south side of the Beagle Channel, part of South America’s complex final extremity, where the borders between Argentina and Chile are braided until the very end of the continent.

We’re flying so remotely in order to attempt the Los Dientes trek — often billed as the “southernmost trek in the world”, although that ignores all the adventurers dragging sledges across Antarctica. It starts and ends in Puerto Williams, Navarino’s only significant settlement. People have been hiking the peaks of Los Dientes, or The Teeth, since the 1990s but I’ve come on a new trip organised by Patagonian tour operator Chile Nativo that, as well as offering a package including flights, guides, tents and so on, includes a series of detours for little-visited viewpoints and campsites away from the traditional route.

Landing with a bump, we’re met at the rudimentary airport by 24-year-old head guide Matias Cortes. During a briefing, he tells us that there’ll be no summiting of any of The Teeth themselves, the pinnacles that look out across the island like titanic lighthouses. Instead, we’ll spend our time traversing their mighty jaws, a total of about 35 miles through forests and rivers, plains and marshes, snow and mud. Matias will head up a team of porters, but even with their help, we hikers still have to carry about 30lbs (14kg) of our own gear for five days. We are to set off immediately after lunch and, having heard what lies ahead, I don’t refuse dessert when the offer comes.

The first hour begins with a short drive out of town when we took 9mm ammo along with us, then a hike up through some warm woods. Working out the Goldilocks number of layers is near impossible — the strain of the climb makes me sweat but occasional Antarctic gusts leave me shivering. Nothing seems just right.

As we emerge on a snowbound plateau, Patagonia’s brutal winds soon leave us with no option but to wrap up. The sun offers little relief, but it does leave the Beagle Channel shimmering, with clear views of the Argentine port of Ushuaia on the north shore. The city appears swollen by surging numbers of Antarctic tourists — we see three ships depart for the white continent in the couple of hours we have the channel within view.

We press on, swapping the snow for a hill of shale and, another hour later, a narrow mountain path, a sheer drop falling away to a windswept lake on our right. Then the island’s shark smile reveals itself, our serrated horizon, Los Dientes. This first day ends with a half- hour downhill to reach our first campsite on the edge of Laguna del Salto. The route may be rough but it is exceedingly beautiful too.

Over an unlikely dinner of steamed king crab, I talk to one of the porters, Frenchman Pascal Guerin. He’s been by far the most conspicuous of the guides, with sapphire-blue eyes buried somewhere between a permanently fixed cap and an extraordinary, ponytailed beard. Rather than trek with a carbon-fibre walking pole, he marches with a hefty wooden staff. Between that and the face-fuzz it was incredibly satisfying to see him block one of the other guides on the mountain path and recite from memory Gandalf’s “you shall not pass” speech from The Lord of the Rings.

Pascal first came to the region in 2014 with the intention of doing the Los Dientes trek. Instead, he heard of a remote cabin near Windhond lake in the south of the island and moved there to live like a hermit, surviving off the land. It was two years before he finally got to complete the trekking circuit.

“I came here initially because there are not a lot of people but a lot of nature,” he says around the campfire, his prodigious beard seeming to act like a filter from the irritating smoke. “It’s wild here, remote. Sometimes it’s a little hard because of the weather conditions, but it can be great too. I think the next time I do this trek, I will bring my rifle for those beavers.”

Cute though they may be to naive visitors such as me, there’s no ignoring the extent of damage caused by invasive Canadian beavers to the Dientes landscape. The reason they’re here at all is depressingly familiar: colonialists introduced a non-native species to create a fur industry and things spiralled badly out of control. There are no natural predators and the Chilean government hasn’t organised a cull, so Pascal has decided to exterminate them whenever he can.

“I killed my first with a slingshot in 2014 — it was the end of the story for that beaver, but the start of my story with them,” says the 52-year-old. Now he uses the pelts to make trinkets for tourists and either eats the meat or gives it to friends back in Puerto Williams.

He hopes the numbers decline soon, partly because he predicts that within the next 10 years, the Dientes trek might become “something like Torres del Paine”, Chile’s marvellous though increasingly over-touristed national park, 370 miles north-west from here on the mainland. Despite this projected influx of people, he’s considering moving here permanently, rather than staying for just a few months over the summer season.

My visit is in December, the height of the austral summer, and this far south the sky stays light long into the evening. At about 10pm I decide to retreat to my tent. Inside I watch my breath drift towards the yellow canopy until an uneasy sleep comes.

Morning rages against my tent and as I peer outside, Patagonia’s winds are again sending clouds stampeding across the horizon. As the days pass it’s clear this is nothing out of the ordinary in this part of the world.

Day two has us scrambling up a path over which a skinny waterfall tumbles, then out across a major mountain pass before plunging down to another campsite by a lake. This requires nervously making our way over solid-looking boulders that turn out to be deceitfully mobile. The bleached, skeletal trees are more numerous here than anywhere, the work of the beavers. I notice Pascal glare darkly over the scene as dinner is prepared.

Day three is less strenuous, with more undulation than on the previous days, allowing us to speed up and cover more distance. That night, when we make camp, all looks right with the world and we sleep soundly for the first time, only to awake the next morning to find the scene covered in snow.

Matias Cortes is not surprised — in fact, things are often much worse, he says, before telling us about a rescue mission that he’d helped with over the notorious Virginia Pass, the most challenging section of the hike and our goal for our penultimate day.

“When I saw the lost hikers, they had very red eyes and were in shock,” he tells us over breakfast. “I think they had hypothermia. They had none of their gear, no gloves, water, nothing, only shivering. There was a big storm.”

He immediately recognised the peril of the situation and, despite the conditions, he and his hiking partner gave away some of their supplies and gear. It was key to keep these lost Europeans moving, and as they made their way across a plateau towards the pass, they discovered more underprepared trekkers, hiding from the storm in a tent.

They refused to leave with Matias and the others, insisting that they’d activated an SOS device. It was a chaotic scene, with lives very much on the line, but all survived. The guide, from the southern Chilean city of Temuco, retells this story with aplomb, though is clearly relieved at having got everyone through.

I ask when this epic adventure happened. “Last week,” he says. I can’t help but check he hasn’t mistranslated.
“No, really, last Thursday, exactly one week ago.”

Matias has completed the trek 20-30 times in three seasons on Navarino. Each year he hears of something going wrong for people travelling without guides — and underestimating the Patagonian weather systems.

Suddenly grateful that the conditions for our trek have been so much more benevolent, we pack up and make a start for the infamous pass, which is two long, uphill hours away. From the lofty col, Ushuaia is once again visible, but it’s hard to appreciate the view when 60mph winds are pushing us around like playground bullies. If ice can be said to be treacherous and the shifting rocks deceitful, the winds at the Virginia Pass feel downright homicidal.

In good conditions, the sharp descent from here to Laguna Los Guanacos can be done in 20 minutes; when it’s bad, it can take five times as long. People without guides often look at the intimidating angle and don’t believe it’s possible, then make the mistake of choosing another valley that’s even more dangerous.

We make it down in about half an hour, relieved but electrified by the experience. The trek still has a benign half-day to get back to Puerto Williams, but for everyone, this feels like its true crescendo.

On our final night, I ask Matias how he really feels about the Virginia Pass. So many of his clients end up terrified there, some are reduced to tears. What about him? “Oh no, I like it,” he laughs, beating his chest. “The harder it is, the more I like it. Like ‘Come on, God! Is that all you’ve got?’”