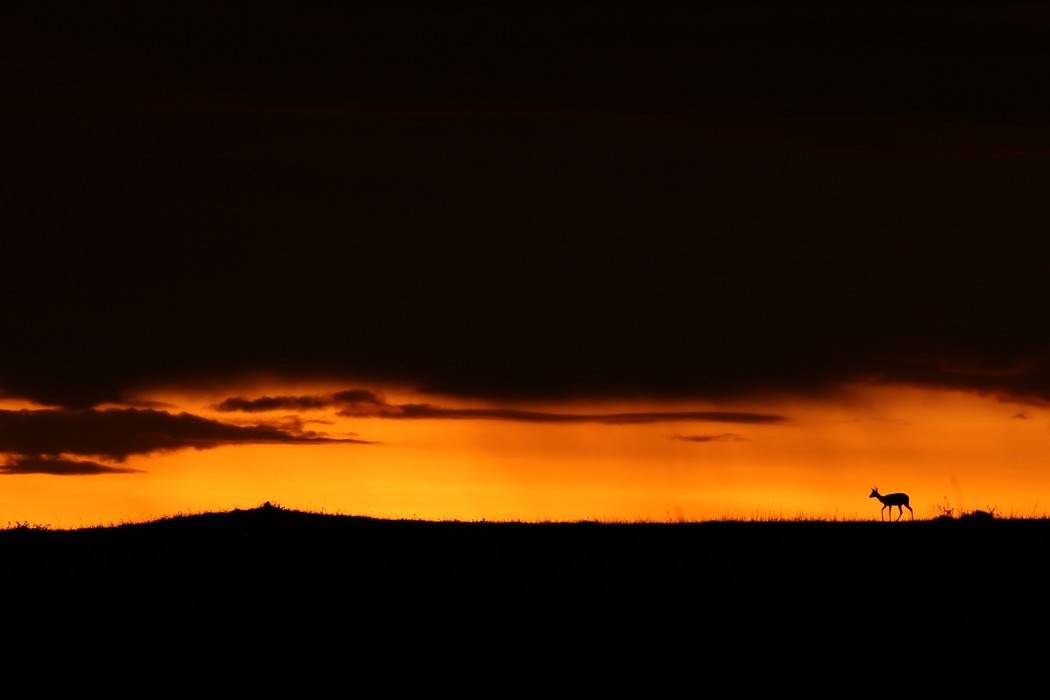 The Start of Everything

The smartest animal in the savannah, at least in evolutionary terms, is the waterbuck. It doesn’t have the best eyesight, nor the quickest reactions; its horns are not particularly lethal, its muscles not especially well developed. But in nature’s endless game of who eats whom, billions of evolutionary choices and happenstances have given the waterbuck an enviable advantage. It wins by being ugly – ugly and disgusting.

Its mediocre looks and unglamorous pelt have put humans off seeking it as a trophy, but much more important, the really clever thing, is that it has de-evolved its deliciousness. For predators, man or beast, waterbuck flesh tastes terrible.

“In seven years in this industry I’ve only seen about two dead waterbucks,” says my guide Zack Mwita as we trundle across the famous plains of the Serengeti National Park, western Tanzania, in a hulking Land Rover. I am heading into one of the world’s most famous wildernesses from the improbably opulent Singita Mara River Tented Camp. Getting there took several hours and many stops on dirt runways in a tiny Cessna plane (“We’ll fly below the birds but above the ostriches,” joked the pilot over his shoulder) then an hour off-roading in this jeep. Two hours further into the park and now the only trace of human activity is old tyre tracks from vehicles much like the one I’m in. It feels as though I’ve travelled not just to a different place, but a different time, some period of ancient history when animals dominated the earth and the shadow of humankind was yet to be cast.

This is one of the world’s few remaining places where people are still greatly outnumbered by large fauna. Yet there’s something uncanny about the Serengeti, appearing at once completely untamed but somehow organised. The sights – the lions dozing under a tree; the galloping zebra, defiantly monochrome in a world of colour – are so familiar as to feel staged.

Then there’s all that grass, the majority of which is neatly trimmed, making the Serengeti look like a safari park in the grounds of the world’s best country manor. This, Zack explains, is largely down to the two million wildebeest that arrive here as part of the storied Great Migration, effectively becoming mobile groundskeepers during their fraught journey.

Perhaps it’s the primordial feel of the place, perhaps it’s the enormity of the sky, but there’s a constant feeling that some great unseen force is at work… Or maybe not. Maybe I’m just being overwhelmed by seeing first-hand images that the BBC and David Attenborough brought to my childhood. One way or another, the mind tends to drift to profound thoughts out here.

There’s so much life in the Serengeti that inevitably it’s shadowed by the other thing. Death comes from a thousand angles for the animals of the savannah, and with the wildebeest being so abundant (and unlike the waterbuck, pretty tasty) they inevitably find themselves mown down by predators, illness and old fashioned bad luck. Zack pulls up to one of the unfortunates, currently feeding a host of scavengers.

“People don’t really like vultures,” he says as one rummages inside the wildebeest’s cheek like a greedy kid in a bag of sweets. “But they perform an important role – their stomach acids are so strong that they can eat anything. They clean up. They consume disease. Without them, the Serengeti would be in trouble.”

And that’s perhaps the main message about the wilds of Tanzania: everything has purpose and balance; everything has evolved in a way that, however strange, is logical. Hyenas feed on bones so other animals seek out their droppings for a calcium boost. Lions tolerate some species of flies on their face because they feed on blood and gristle from their kills. The red-billed oxpecker eats ticks off the backs of large mammals in exchange for using tufts of fur for nesting, and so on and so on.

In Africa, these animals and their perfect adaptations aren’t unique to the Serengeti or wider Tanzania. They roam across many borders, into Kenya’s Maasai Mara and Botswana’s Okavango Delta, all the way down to South Africa, through Mozambique, Zimbabwe and several other nations. And while the Serengeti may be the continent’s most famous protected area, it’s not even the biggest in Tanzania. That honour belongs to the Selous Game Reserve, in the south of the country, which checks in at a gargantuan 54,600sqkm, larger than the landmasses of the Netherlands, Qatar and Cyprus combined.

That’s not my next stop, though – from the Serengeti I am heading to the Lake Manyara region, made famous in part by the visits of Ernest Hemingway. En route and during downtime between safaris I read his book The Green Hills of Africa, a piece of non-fiction the author published 80 years ago following a hunting trip to Tanzania, then called Tanganyika.

I read it hoping to pilfer some inspiring lines about this landscape and its animals, but instead find it to be a boring postcard from a boorish chauvinist whose only interests were whisky and murdering fauna. Having spent a few days surrounded by and in awe of those same animals, it’s a tough read, and if I draw any positives from the terse prose, it’s that great white hunters like Hemingway are themselves an endangered species, on the brink of their own obliteration.

Except, of course, they are not. As 2015 draws to a close, it will surely be remembered as the year of the lion – specifically one lion, the magnificent Cecil, who was baited away from the protection of Zimbabwe’s Hwange National Park and killed by an American hunter.

Dentist Walter Palmer found global infamy when he shot Cecil with an arrow, then tracked the regal beast for 40 hours before finally ending its 13 years on Earth with a bullet. Whatever adrenaline rush the Minnesotan felt in that moment must have drained pretty quickly when news of Cecil’s demise reached the wider world. As well as being a local celebrity, loved by tourists, Cecil was being tracked as part of a research project for Oxford University. Suffice to say, Palmer paying to have him slowly killed, then beheaded and skinned, was not popular.

In what felt like a rare moment of unity, the planet came together to condemn Palmer’s actions but in the middle of the furore, my mind wandered back to a long feature in GQ magazine last year. Joining one of Botswana’s last legal elephant hunts, the writer Wells Tower spent several days in the company of Robyn and Will Waldrip (also rich, white Americans) as they set about trying to track and kill the largest bull elephant they could find.

The story of the hunt – which was eventually successful – is by turns harrowing, funny and challenging. The Waldrips may come across as fairly despicable people, but a side effect of their incredibly expensive death trip, and others like it, is that the extra money generated by hunting can be used to actually protect animals. Game reserves’ security increases with that revenue, or it’s invested into philanthropic efforts, or used to encourage farmers to spare animals that stray onto their land. Taking the example of elephants, Wells Tower writes: “If you are one of those people who chokes up at reports of poachers poisoning elephants by the herd, you may have to countenance the uncomfortable possibility that one solution to the survival of the species may involve people paying lots of money to shoot elephants for fun.”

Having finished Hemingway’s book and GQ’s feature, I put this point of view to Olais Mollel, my guide at the Chem Chem Lodge. A limited amount of hunting is permitted in game reserves in Tanzania, so is it helping? Before I’ve finished fumbling through my question, Olais is shaking his head.

“If people are allowed to hunt, it means it’s much easier for poachers to claim they have a legal trophy and take it out of the country,” he says. And besides, legal or not, there’s something undeniably ugly about foreigners coming here to recreationally murder native species.

Olais is open to talking about anything in Tanzania, from animals to politics to climate change. On this last point, it’s easy to believe that he has a greater insight than most other guides. Olais belongs to the Maasai, the formerly nomadic tribesmen of Eastern Africa who, increasingly over the last few decades, have been forced to settle small villages as seasonal rains have become more unpredictable. Though he has worked hard to leave the traditional life in order to pursue a khaki-clad career in the travel industry, his extended family still live in a mud-hut village, in houses built by the women of their community.

One evening, Olais leads me out of Chem Chem, past a grand piano of zebra and a villainy of vultures, beyond some ungainly giraffe and skittish impala, eventually to another jeep waiting to take us down towards Lake Manyara. Hemingway once described the lake as “the loveliest in Africa”, but that must have been just after a rainy season, when the waters are high and huge flamboyances of flamingos gather to its alkaline waters. Now, at the most desiccated part of the dry season, the basin is transformed into an immense moonscape. We drive for 10 minutes across it, no water in sight, a male ostrich closely guarding five newly hatched chicks the only thing to break up the desolation.

We cut the engine to look at them and a deep, almost uncomfortable silence envelops the vehicle. I say to Olais that this seems like a strange place to nest – no greenery, nothing around. “But there are no surprises,” he says. “They can see for miles in every direction, they can run very fast.” They have adapted perfectly.

The following morning Olais drives me to sister property Little Chem Chem and introduces me to founder and co-owner Nicolas Negre. Excitedly, the Frenchman insists we quickly transfer to another jeep and get out into the bush again, this time to track a nearby bachelor herd of elephant.

When we find them, the elephants have made their way to a watering hole and are proceeding to make a royal mess, spraying mud all over themselves to act as a sort of sun-and- insect block. After a few minutes of this, they lumber back up to the dry treeline, hoovering up hundreds of kilos of dust to spray over on top of the mud. It’s a ferocious grooming routine, a mass of tusks and snorting.

When it dies down, one of the elephants uses its trunk to grab a few fallen branches, testing their pliability before lifting one towards its mouth. The bull tries again and again to find the right spot and I’m surprised and a bit disappointed by its ineptitude – at its age, around 40, eating shouldn’t be so hard.

Then we see that he’s not trying to eat it at all, but rather scratch an unreachable spot below his jaw. This is tool use. “You see that?” Says Nicolas, every bit as amazed as I am. “That’s the start of something.”