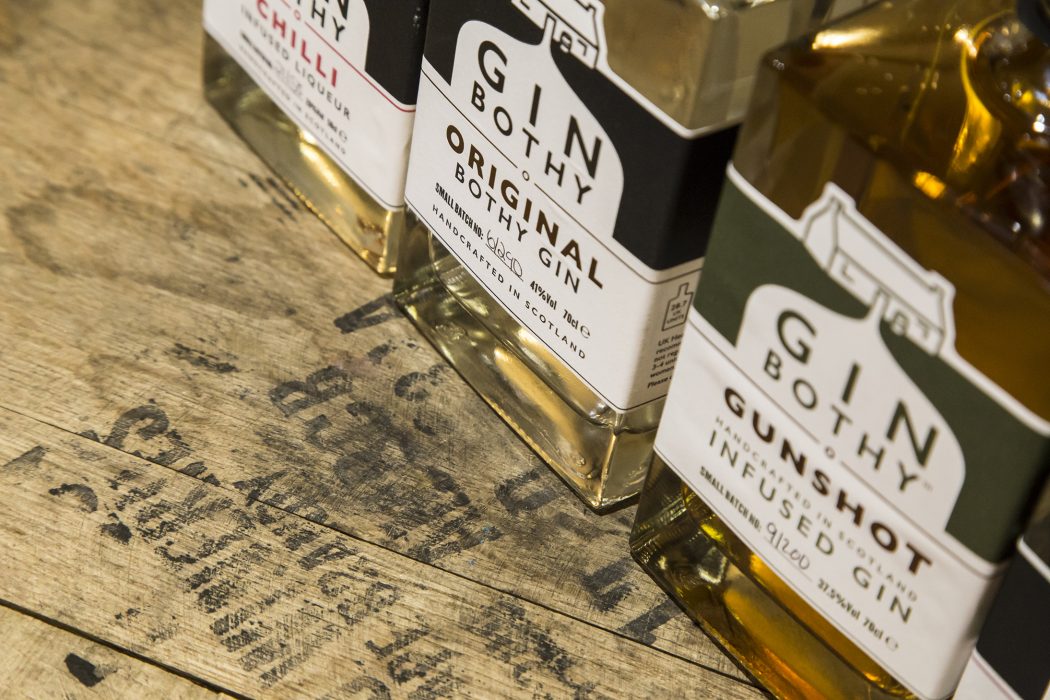 The morning I set off to trace Scotland’s new gin trail feels like the wettest day in the history of wetness and days, a morning so vengeful that no material, artificial or natural, can really keep a person dry. When I get to the Gin Bothy I’m as grateful for the shelter as anything else. This is of course the idea – bothies traditionally provide sanctuary in rural Scotland. However, this one, on the outskirts of Kirriemuir, offers a lot more than that.

Kim Cameron started as a jam-maker, before segueing into infused gins a couple of years ago. Now, with business booming, she’s moved to this old blacksmith’s, set on a quiet B-road in rich, rolling pastoral land in the heart of Angus. “This is berry growing country,” she says, sliding a sturdy door to shut out the lunatic weather behind me. “Lots of flavours. Raspberries, strawberries, rhubarb, chilies… Anything I did with jam, I’ve done with gin.”

Inside, an old stone forge provides no warmth, but it does make for a satisfying centrepiece. Everything in the bothy feels traditional – all barrels and hessian sacks and rusting farm tools. Atop each of the barrels sits a colourful gin, each making me badly regret having brought the car. Kim tells me that by far her most popular product is her Gunshot gin, which is best served neat or with ginger beer, and is unashamedly marketed at men.

With the help of just three part-time employees, she hopes to produce around 20,000 bottles this year, all of which will be filled by hand out the back of the bothy. Friday is delivery day, not for a large distributor to come and pick up her stock – Kim personally loads up her van and drives around the country. In a world of new businesses and small batch production, the Gin Bothy is one of the very wee-est.

Things are growing so quickly that the business has to be tweaked on an almost monthly basis. This new bothy is now open during the first weekend of each month, and by appointment at other times. It’d be open more frequently, but single-mum Kim is rarely in one place long enough to do so. Despite having just moved into this building, she’s already got her eye on another disused farmhouse across the road, perhaps to convert to use as a café in a few years. Before that, she’s going to give cider-making a go and is constantly looking to find new flavours to extend her gin range. No, she’s not going to dabble in whisky, she’s happy not to mess with things she doesn’t understand. But if nothing else she understands bothies – in fact, she has a bothy song. Would I like to hear it? I absolutely would but – by God – I wish I could have a drink, too.

“Oh the bothy offers comfort, aye despite its draughty door, and I know that in the future, I’ll miss its flagstone floor…”

The traditions that the Gin Bothy taps into are quite at odds with the modern gin industry, where there’s little in the way of reverence and lore, but plenty of flexibility and fun. Unlike whisky, there’s no waiting three years and a day to even try it; no waiting three days, even. It a very modern spirit – the Instagram filter of booze, the 140-character option for a piss-up. As I get back in the car and restart the wipers, I find myself wondering if it’ll be just as disposable.

Yet there’s no denying that the gin industry has exploded across the UK. When last year reports heralded Scotch’s demise at the hands of gin (by 2020 the latter is predicted to outsell the former) it sounded like terrible news for Scotland. But 70 percent of all British gin is made north of the border, so with many new producers selling more and more liquid, it’s not so much a case of a whisky drought as a gin tsunami.

Alongside dedicated gin bars in the major cities, there are now almost two dozen Scottish gin producers – in the Highlands and Lowlands, on Shetland and Harris; individuals and conglomerates, industry newcomers and old hands. Many already offer distillery tours, and, as I was to find out as I travelled around the country, everyone is making hay in this brilliant sunshine.

But, inevitably, not literal sunshine. One very damp hour to the south in Eden Mill’s distillery, just outside of St Andrews, I watch rain trickle through the roof before making a long drop in to a red bucket. A poster-boy of the Scottish gin revolution, I expected to find Eden Mill neat and clinical, perhaps a little like a laboratory. Instead, this five-year-old company is based inside draughty old warehouses that were once the Haig Whisky distillery before they spent over a century as the Curtis Paper Mill. There’s not been a huge amount of industrialisation since: each of the 2,500 Eden Mill bottles produced daily is still sealed by hand in something that looks like a deep-fat fryer, then cooled in a water jug.

One of their many quirks is that they were never supposed to make gin. “Eden Mill started with beer and whisky back in 2012,” says distiller Jasper Daly. “The gin didn’t come until about a year and a half after that, but we hit peak popularity.” The gin is now so sought-after that tours of the brewery wing have been condensed to weekends so that Eden Mill’s guides can talk about gin every day instead. Turnover will exceed £6 million this year, but the first whiskies will only be tapped in November.

The next morning I drive all the way to Moray, through the mighty Cairngorms National Park. Currently there’s little sign of a gin trail en route; instead, dozens of brown tourist signs instruct me to turn off for whisky distilleries. Or at least the signs I can see – the weather still has an apocalyptic bent, with great sheets of rain hypnotically pulsating across the mountains.

Despite all this precipitation, unlike with whisky, few Scottish gins are currently being made with locally sourced water. Instead, most gin producers, including Eden Mill, buy-in neutral alcohol, then distil it with their individual botanicals before bottling and branding. While this has allowed for new producers to pop up across the country, there’s still been enough room for Scotch makers to pinch a little market share, too.

In Speyside, deep in whisky country, the Balmeneach Distillery was one of the first to be granted a license for Scotch, back in 1824. Yet for all that tradition, and the distillery’s classically Highland location at the bottom of a yawning valley, they still jumped on the gin bandwagon with Caorunn. Now they also offer daily gin tours within the old distillery, and while their botanicals are undoubtedly linked to the ancient countryside (rowanberry, bog myrtle, heather shoots, coul-blush apple, and dandelion) the first bottle only became available in 2010.

Similarly, nearby Gordon Castle has been producing its own gin for the last few years, with botanicals picked from inside its enormous walled garden. Unlike Caorunn, however, it then sends these off to London for distillation, before everything is returned to the Highlands for sale. Inside the castle grounds, I inspect the mint and rosemary that will one day go into that award-winning gin, clinging to my golf umbrella like the mint leaves to their stems.

The following morning, such inclement conditions are a distant memory. As I drive south to Aviemore the sun erupts over the Cairngorms and Scotland looks exactly like it does on calendars and tea towels. My final stop is to be Crossbill Gin, half way to the middle of nowhere, in a former ‘Shed of the Year’. However en route, I find out that this is no longer the case. In a perfect illustration of how quickly the Scottish gin industry is moving, I arrive at the address only to learn that Crossbill has relocated 100 miles south, to Glasgow.

Founder Jonathan Engels has a new space of his own, in the legendary Barrowlands Market where as well as making his magnificent gin, he hosts schools for visitors to make their own grog in petite individual stills.

As the class begins with a large gin and tonic for all, the host sheepishly admits that when he started making Pincer vodka in 2006, by pumping it full of milk of the thistle he was trying to make a hangover-free booze. Of course it didn’t work, but the popularity of Hendrick’s Gin (made in Girvan on Scotland’s south-west coast) inspired him to research the prospect of making true Scottish gin, too – one made with native juniper.

Having found some aged, berry-producing trees in the Cairngorms, he began to work with the Forestry Commission and Plantlife to locate existing juniper trees and plant new ones.

He’s so committed to provenance that his only other botanical is Scottish rosehip. He often includes some juniper needles in his brew and doesn’t insist on a consistent flavour, but rather “consistent quality.”

I’d settle for any kind of quality with my own concoction. Jonathan advises us to write down our formulae, in case we accidentally fall into Dr Jekyll’s trap of not being able to replicate it. I needn’t have bothered. Following what I thought was sound logic – that established food pairings would work well in a drink – after juniper I load my gin with lemon, lime, and a little pepper. The resultant flavour profile is somewhere between washing-up liquid and a high school chemistry experiment. As I ask Jonathan for another glass of the good stuff instead, I am reminded of something Jasper Daly said back at Eden Mill. “We have a lot of ideas and experiments here,” he said while taking the temperature of his still. “The vast majority of them are good, but some are bloody awful.”

A version of this piece was published in the Financial Times in November, 2017.