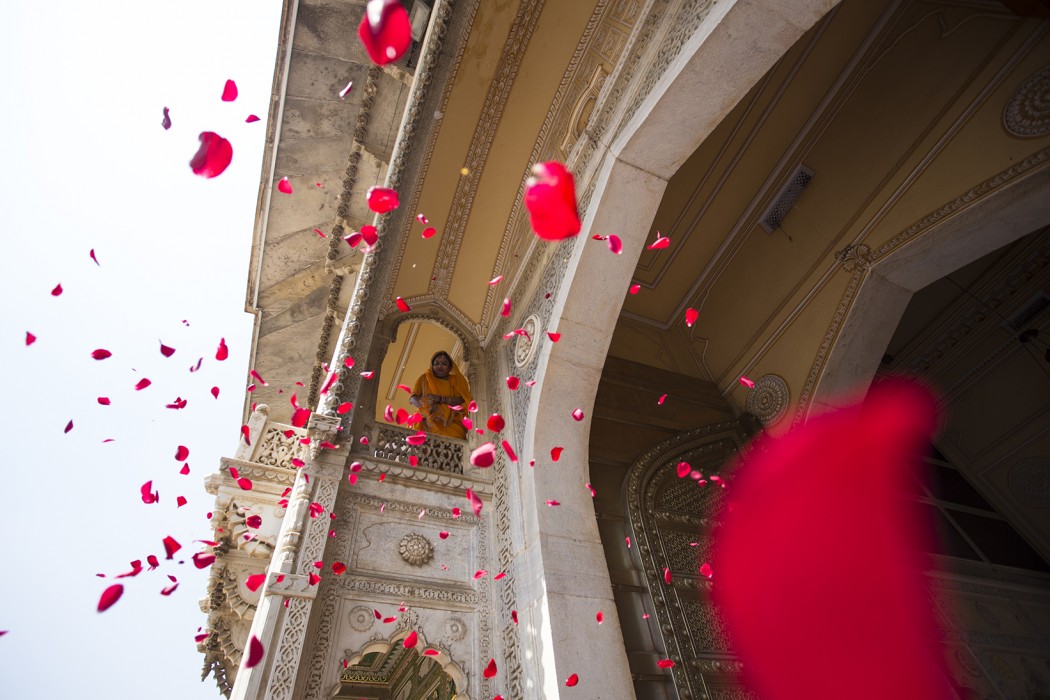 Here are some people waiting on a platform: an elderly man with a waterfall beard cascading from his wizened face; a young mother in a mustard-yellow sari holding a bamboozled infant wearing eyeliner; a little boy striding purposely past them to the end of the platform, curling his toes over the edge, and pissing onto the rails, a perfect golden arc glinting in the morning sun.

Above them, hand-painted signs cover the walls; around them, a scratchy tannoy voice babbles updates from the network. Nearby a dog quivers with fleas, then restlessly shifts on the concrete as though expecting a relative to return on the next carriage.

Everyone is waiting for something, but they are not, in the ordinary sense of the word, waiting for my train. The Maharajas‘ Express is the best train in India by some measurements, and the best in the entire world by some others. A grand, burgundy monster too big for many of the rural stations, it is owned by the Indian government and has been designed to carry foreigners – and to be seen and photographed by locals. For the onlookers on these platforms, the Maharajas‘ seems to say: wait long enough and you too could make it on here.

I’ve come on board for the Indian Panorama programme, a sort of 2,300km sampler of northern India’s most popular historic sites. It starts in New Delhi, and over eight days and seven nights introduces its guests to the country’s Hindu, Buddhist, Muslim and British heritages.

Each carriage (the number varies depending on the occupancy for the trip) is assigned a personal butler, young men who seem to possess a Batman-like ability to appear from nowhere to offer help. Some guests theorise that the butlers are stored in the ceiling and deployed the moment they sense a minor inconvenience.

For many, being waited on like is a treat, but I find it more than a little uncomfortable. Having an Indian house boy is, for this Brit, an embarrassing business. The only mercy is that my butler is called Mahipal, which is more-or-less pronounced ‘My Pal’, allowing me to feel as though we’re something like equals. “Thanks for that My Pal”; “Oh don’t worry about it My Pal, I’ve got it.”

The key to enjoying the Maharajas‘ Express, for me anyway, is to pretend like you’re in some kind of elaborate reality show and that none of this is real. When they literally roll out a red carpet for us at a village station and the music starts playing and beggars in rags are shepherded to the side so we can stride past… That’s all just pretend. Actors in convincing garbs. But, wow, haven’t they done a good job with how it all smells? At almost every stop the platforms are decked out in garlands of fiery marigolds. Often there is a band. Always there are locals staring. You have to slide into the role pretty quickly.

Thankfully the substance of the Indian Panorama itinerary is so rich that a lot of this pantomime is forgotten. The first stop is the spectacular pink city of Jaipur, then on to Ranthambore National Park where we casually see wild tigers from the jeep, as though they aren’t stealth experts and one of the world’s most endangered creatures.

That afternoon we visit Fatephur Sikri, an abandoned red ruin, once the home of the Mughal Emperor Akbar, now a UNESCO World Heritage Site and the domain of several hundred rose-ringed parakeets, whose vibrant green feathers seem to bounce out of the ochre sandstone. Our cameras flutter like their wings.

Several of the passengers on-board have also travelled on the fabled Orient-Express, and compare the Maharajas‘ favourably. It may not have the prestige of its older rival, but it has considerably larger cabins and every night of the trip is spent on the train (on the Orient-Express’ London to Venice route, just one night is spent on-board). Not that people don’t occasionally lament being on the train through the night. It’s rarely quiet, occasionally the old tracks cause the carriages to rock violently, and some trick of the half-conscious brain leaves several passengers feeling as though we are travelling too fast towards some unknown disaster.

This being India, the train driver also uses the horn – a lot. Sometimes to alert signalmen further up the line, sometimes to try and cajole people into getting out the way. Its mega population means that there are 1.2 billion potential problems in India these days, and that’s not including the itinerant holy cattle. Nonetheless, it’s hard to imagine how the train could do much more, given the format is essentially the same as it was in 1853 when the invading British ran India’s first locomotive.

The food is unanimously excellent too, but while the Europeans are familiar with many of the Indian dishes, for the Americans passengers much of it is a new experience. And for a small Japanese group of four, whose food at home is diametrically opposed to this, negotiating the thalis is like walking through a chilli-laden minefield. Noting this, the chef and his unseen team start cooking separate dishes for them.

It’s that kind of service which leaves people so fond of the Maharajas‘ Express, and undoubtedly the sort of thing that’s led to it being crowed Leading Luxury Train at the World Travel Awards for the last four years consecutively. The attentiveness is possible because of the mammoth number of staff – the majority remain invisible, but once you total everyone working on the train there are between 70-80 employees, far more than there are passengers.

Many of the places we visit – Agra, Varanasi, Lucknow – are familiar to us outsiders, at least in name, but none of us have heard of Khajuraho in Madhya Pradesh. We know nothing about it before we arrive, but that soon changes thanks to our guide, the garrulous Mr Singh. As we walk around these UNESCO-backed Hindu and Jain temples, he starts every anecdote by pleading for “our kind attention”, before launching into a colourful dialogue about ancient practises, tyrannical emperors or Buddhist principles.

“May I have your kind attention? Who are you?” He asks no one in particular. “You are not only a body – you are a blessed being!” Some of the passengers nod attentively, others wander off to take photographs of the near-pristine sculptures that adorn these 1,000-year-old temples.

We meet a new guide almost every day, all with excellent English, most with a good sense of humour. (“See these milk urns? The writing says how much water they have added to the milk – and sometimes how much milk was added to the water.”) A couple of times, however, it feels as though we don’t need any guidance at all.

The first time it happens is at the Taj Mahal, the grandest jewel in India’s crown, the “tear-drop on the cheek of time”, a place so photographed and mythologised that it seems almost unnecessary to try and capture it here. Perhaps it’s enough to say that as far as the death business goes, this is about as beautiful as it’s possible to be.

The other time is in the holy city of Varanasi. Death looms large here too, death of the here and now, with 24-hour public cremations taking place on the banks of the Ganges. Above the ceremonies, black kites swoop ominously over buildings which seem to be crumbling into the water. For Hindus, there is no better way to enter the afterlife than here, returned to ash by the holy river.

Watching the ceremonies from floating boats, the passengers of the Maharajas‘ Express are divided about whether or not we should be here at all. The deceased loved ones are dipped into the sacred water before being transferred, wrapped in bright robes, to the pyre. A prayer is chanted, a flower placed, thousands of bells ring, the sound tinkling over us like rain.

Personally, I’m glad to witness it, to see that the departed – some of them so light their stretchers are lifted as though empty – are indeed loved ones, perhaps even more so in death than in life. Mark Twain wrote of Indians: “It is a curious people. With them, all life seems to be sacred except human life.” I can’t say how true that is, but visiting Varanasi I saw that at least human death is sacred.

On the last morning it’s us who have to do the waiting, held at a signal outside New Delhi as the rush-hour traffic snakes its way hither and yon. As I eat my final breakfast in the dining car, a local train pulls up next to ours. The people on board are in second class, without air conditioning or virtually any comfort at all. I stare at them and they stare back for longer than I can bear. But before I look away, a trick in the reflections between the windows seems to project me into their place, and I hope that they, however briefly, can see themselves in mine.

A version of this piece was published in Fairfax’s Traveller in July 2016.