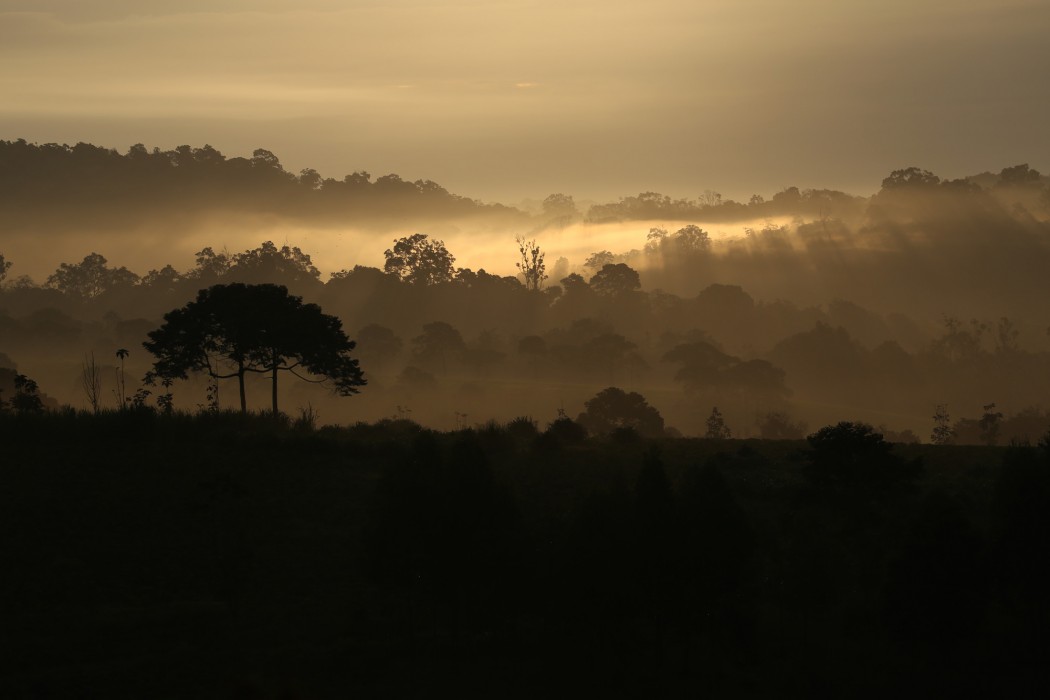 The Hospital Built by Gorillas

In a jungle on a mountainside, in the southernmost part of Uganda, in the very heart of Africa, there stands a hospital, a hospital built by gorillas.
It’s an ongoing job, and though the Bwindi Community Hospital first opened 12 years ago, on some mornings you can still faintly hear the great apes, far off in the trees. If the gorillas are seen as too noble and dignified to spend time on the shop floor these days, the same cannot be said of their rascal cousins, the monkeys, who mischievously raid medical supplies and dance across rooftops, just out of reach of irritated security guards.
Though their hulking bodies would have come in useful for some of the early grunt work, the gorilla’s job was essentially PR – without them living nearby, and the funding they attracted, the hospital and its remarkable achievements would not exist.
Like hundreds of rich Westerners before and since, US couple Scott and Carol Kellermann came to Bwindi to track the gorillas, but unlike most before them, they found the plight of the minority Batwa pygmies too troubling to ignore. Scott, a doctor, and Carol, an educator, ended up moving to Uganda, living there from 2001–09 to help found and develop their remarkable hospital. In 2004, The Kellermann Foundation was established to continue their good work; now their facility has the capacity to perform everything from scans to surgeries, from baby deliveries to the treatment of alcoholism.
Unbeknown to the gorillas, they were also partly to responsible for the disenfranchisement of the Batwa people, the tribes having been displaced from the Bwindi Impenetrable Forest after it was declared a national park in 1993. Part of the motivation for that designation was to protect the gorillas, and to encourage people like the Kellermanns to visit the area. The whole thing forms a kind of loop, in other words, with the gorillas and the Kellermanns seemingly equal partners in the need for and development of the hospital.
But what began as an outreach clinic under a tree, has grown into a 112-bed hospital staffed by over 120 people providing healthcare and health education services to a population of over 100,000 people from as far as 40km away. The Batwa are still looked after, but they are now a smaller part of a much larger whole; for the last six years, this has been rated as the top performing hospital not only in the area, but in all of Uganda.
Depending on whether it is the International Monetary Fund or the World Bank doing the counting, Uganda has either the 164th or 167th lowest GDP in the world. By any measurement it can be described as one of the planet’s poorest nations, so even though a glance at the Bwindi Community Hospital may leave you a little concerned about its facilities or sanitation, by national standards it is a trailblazer.
As well as food shortages and subsequent malnourishment, such widespread, grinding poverty brings a vast array of medical problems for Batwas and the wider Ugandan community. Away from the fairytale adventure offered by the gorillas, The Bwindi Community Hospital’s challenges are manifold and its successes are astonishing.
HIV-AIDS is, of course, a major problem. Sex education is one of the hospital’s key aims, both in terms of reducing sexually transmitted diseases, but also population control and avoiding young pregnancies. In various wards and meeting rooms, posters bear slogans like: “A smaller family is a richer family.”
However, in southern Uganda, as in all of Africa, the biggest killer is still malaria, meaning huge amounts of resources are diverted in order to let people know of preventative measures and how to spot early symptoms. Childbirth and child mortality are also areas of focus, especially as many women from rural communities prefer to give birth at home. In response, the hospital constructed a kind of sanitary hostel away from the main building, closer, in more ways than one, to the expectant mothers’ homes.
Traditional beliefs and modern practices collide frequently in this part of the world. In the town and surrounding villages witchdoctors operate their own types of clinics, offering herbal remedies and more elaborate ceremonies to chase away any and all ailments. For many patients their methods are at least as valid as the ones being practised by the hospital. This puts the healthcare professionals in a difficult position, caught between respecting the faith in the witchdoctor and knowing that much of what he says is hokum.
Beliefs in evil spirits and unseen forces complicate almost every area of treatment, but they’re particularly insidious with mental illness. People with those conditions are often shunned by their neighbours, for fear that the demons possessing them may attack anyone who interferes. Shifting this stigma is something the hospital has also had success in – recently they were able to return a woman with a 12-year history of mental instability to living independently in the community.
The administrators explain that information is the key to helping the people of Bwindi – both dispensing it and gathering it from the community. The ability to track pregnancies, disease carriers, infants, demographics… All of it helps to increase understanding of the needs of the locals. People are encouraged to register for a nominal fee, granting them access to the hospital’s expertise and facilities. It’s voluntary, and you might think people would dive on the help, but a great many things can cause fluctuation in participation, from whispering witchdoctors to particularly extreme weather.
A constant, at least for now, is the presence of the gorillas. They helped to build the hospital in the first place, and their ability to attract tourists goes hand in paw with the hospital’s ability to find new financial donors. It is, and has always been, a collaborative effort.
bwindihospital.com

A version of this piece was published in Etihad Airways’ Aspire magazine in October 2015.