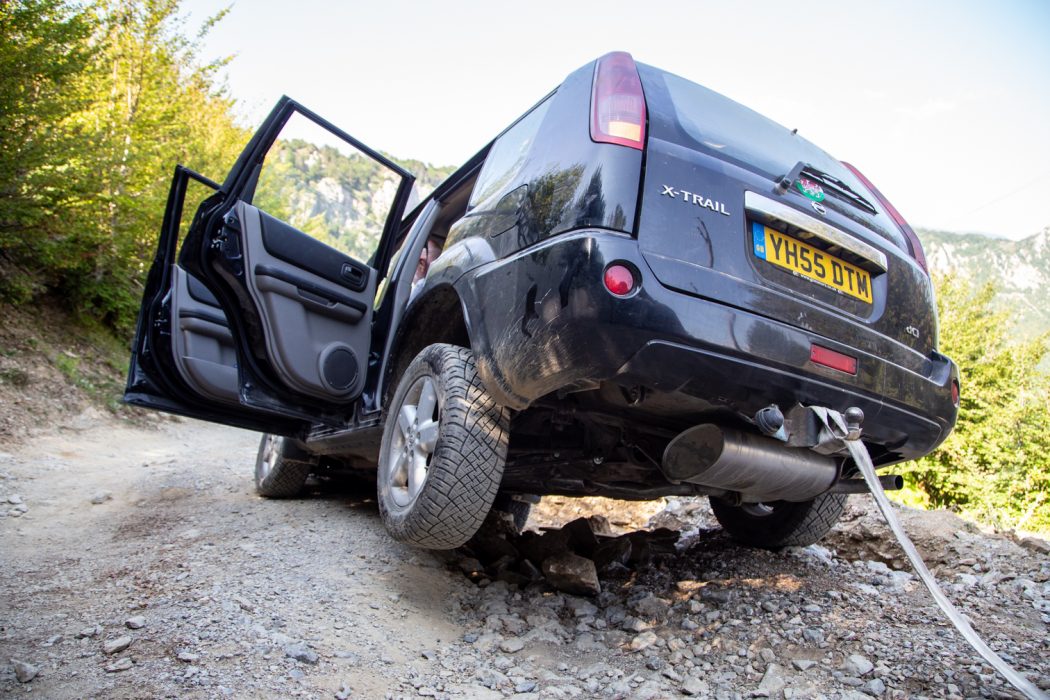 After more than two decades on and off-road Ursula was in bad shape. Her speedometer did not work, nor did her fuel gauge. Ursula’s odometer was stuck on 147,467.8km and nobody knew when it stopped counting. Her air-conditioning worked in theory, but in practise caused the engine to overheat. Her gear-stick felt loose, like the leg of an overcooked chicken and the rubber around her steering wheel was malleable and disintegrating. No one was even really sure who christened her Ursula.

When we stopped for the drinks, the extreme heat of the day had loosened a seal around a rear door so much that it dropped down like a snake from a tree. This thing, a Nissan Terrano II, wouldn’t have passed a MOT this side of the millennium.

Iain and I didn’t disagree. We’d been living with Ursula’s idiosyncrasies since we began this inaugural rally in Bosnia four days ago. The idea is that you take a second-hand vehicle on a route planned by the Travel Scientists, an adventure-tour company based in Budapest. They offer different packages on their rallies, including one in which you can hire a (very) used car for the duration. There’s no rule specifically stating you can’t bring a brand-new Toyota Land Cruiser on the trip, but it wouldn’t really be in keeping with the rag-tag, masochistic spirit of the event. For his part, Dirk had brought a modified VW estate, but wisely opted not to bring it on this off-road section and collect it on the other side.

The Travel Scientists had their initial success in India where they pioneered the Rickshaw Challenge. That was over a decade ago, and while they still offer five of those manic three-wheel adventures each year, their business has grown to include a handful of new routes in Europe. The Great Balkan Ride is the newest of these, starting in Sarajevo, travelling through Montenegro, then Kosovo, followed by four days in Albania, culminating with a quick blast through Greece to Thessaloniki and the finishing line.

No actual racing takes place – rather the teams are given a roadbook and GPS coordinates for their accommodation each night from their Amcrest GPS Trackers. How they get there, how long it takes, and whether they choose to go alone or ride in convoy is up to them. There are, in short, few limits.

Thankfully this is also true for upper age limits, which during my journey meant that septuagenarian couple Tony and Beryl Thorndike could face every challenge the Balkans had to offer. On our day in the Accursed Mountains, Ursula, Iain and Dirk had to turn back on a high pass to help a Danish team whose Toyota Corolla had been badly damaged by uneven road. So that a rescue could be attempted, I freed up a seat and jumped in with the Thorndikes.

As I came to learn in the Accursed Mountains, the English couple’s enthusiasm was infectious, as was their delight in the scenery. “My God! Look at that Beryl!” cried Tony from behind the wheel.

My new driver was 75 years old and had decided five years ago to restructure his retirement plans when he read an article about the inaugural Central Asia Rally, another of the Travel Scientists’ lunatic adventures. He’d since completed that epic journey to Kyrgyzstan twice and didn’t want to miss this new route. I got the impression Beryl may have preferred her twilight years to be a little more sedate, but she kept finding herself on these daft adventures with her irrepressible husband.

We’d just started discussing this, and the impressive mobile fridge they had on the back seat of their Nissan X-Trail, when the entire world lurched violently to the right. There was a heroic amount of swearing from all of us, and then, after a couple of seconds of assessing the scene, the realisation that the car was teetering, Italian Job-style, on a cliff-edge. Nervously we each got out of the same side of the vehicle, with me least to jump out, just in case the entire thing fell down the mountainside.

The Nissan sat uselessly on the precipice. We were stricken and had no phone reception. Our best guess was that we’d have to wait for Ursula and the others to come and find us on their way back down from the other rescue, but that seemed like an awful lot of faith to be placing in that withered old zombie car.

Almost miraculously, we didn’t have to worry. By blind chance a kind Belgian family driving in the opposite direction – quite separate from our rally – happened upon us and quite literally pulled us back from the brink, towing us to safety with their mighty Land Rover Discovery. Never had it seemed more important to have a close relationship with Europe.

When we finally arrived at our accommodation that night, bodies and nerves frazzled, we’d been driving for around 11 hours, 10 of which had not featured tarmac.

Four days earlier things were a good deal more civilised in Sarajevo. Needless to say, it was not always so in that city. When I’ve visited places such as Japan, or Vietnam and seen elderly people on the street, I’ve found myself wondering: what did they see in their nation’s wars? What did they do? In Sarajevo, I found myself pondering the same about people my own age.

Among the other drivers I met that night were Jonny Baumann and Anne-Mette Jørgensen from Denmark who were to attempt the route in the soon-to-be-doomed ‘Lola’ the Toyota Corolla. The next morning it was decided that Anne-Mette was to drive that day, a call that was made by the roll of some furry dice. Most of the Danes’ fate was decided this way: who’s driving, what to order in restaurants, whether to turn left or right… The fluffy dice decided it all.

From Bosnia we travelled to the impossible beauty of the Montenegrin highlands, snaking up sheer gorges above deep blue reservoirs. Much is made of the coastline in that little country, but the interior is just as beautiful, if still a little imperfect. Between potholes, I scribbled that it was one of the most sensational drives I have ever taken anywhere but when I tried to underline ‘sensational’, the violence of the road made my pen tear a hole in my notebook.

The next day Iain and I accidentally drove Ursula off-road for two hours when our sat-nav misinterpreted what constituted a road. The only other horsepower we came across in that time belonged to actual horses. Back on asphalt, we eventually climbed to the mountain border with Kosovo, then plunged down towards Pec for almost an hour, the acrid reek of our burning brakes drifting in the window while the city’s lights twinkled below.

Arguably the star attraction was the mighty Berat Castle which has looked out over the city in one form or another for over 2,000 years. Iain and I decided to leave Ursula at the bottom of the hill and stretch our legs along the uneven stone road to get up to the castle’s ancient walls.

As was often the case, there wasn’t too much time to delay – Berat wasn’t our final stop for the evening, so after we’d taken just a few snaps out across an enormous U-shaped valley in the setting sun, we had to head back down the hill, collect our decrepit but now beloved Ursula, and drive a final couple of hours to the unlovely town of Vlorë on the Adriatic Coast.

By the time we got to Thessaloniki and the finishing line a couple of days later, there was a sense between the teams that we’d all bonded, like victims in some support group, interdependent having shared trauma. Stories and beers shot across the dinner table as we reviewed the week. A round of ouzo was ordered and Tony Thorndike made his way over to me.

Between mouthfuls of irresistible Greek salad – which were all the more delicious having put up with so much mediocre fare in Albania – I made a point of noting down what he said. Tony may have nearly killed me but nonetheless, what he said sounded awfully like the truth: “You know, it’s not just about the endurance, physical and mental,” proclaimed my friend, slapping me on the shoulder. “Or the ability to persevere, to sit on your arse all that time. Really, it’s about the people.”