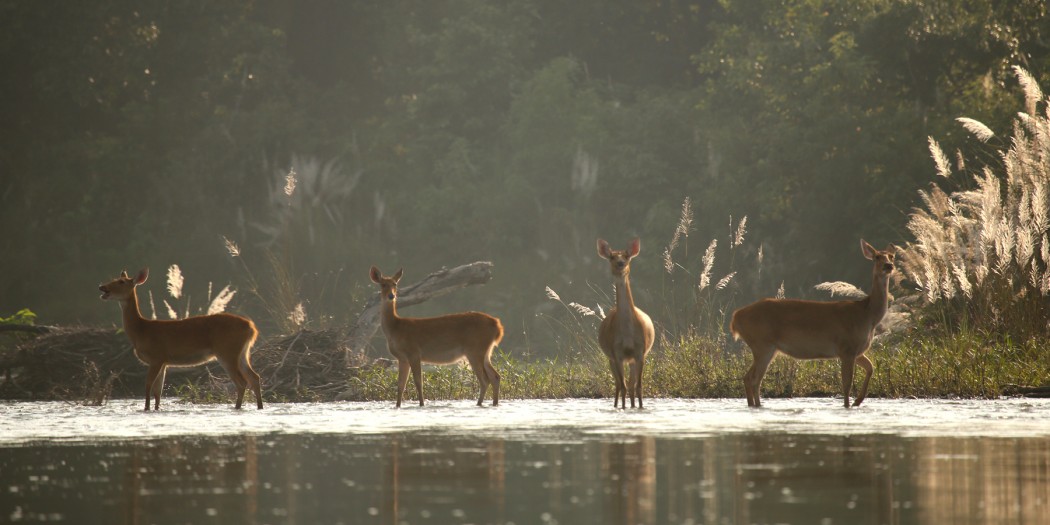 The Fall of the Wild

Seven months on from Nepal’s catastrophic earthquake, tourists remain uncertain about when to return. Summer or winter? Spring or autumn? Surely not during the monsoon?

The answer is simply as soon as possible. Plainly the country needs the income – tourism makes up almost 10 percent of its GDP and its sudden absence is keenly felt. But if altruism isn’t your bag, there’s another, more selfish, reason for coming back immediately: there are large swathes of Nepal, formerly busy with tourists, currently lying empty.

I recently went to Nepal for a second time, five years after my first visit, and found certain aspects undoubtedly different. The melancholy air of the people was one thing, the emptiness was another. During a few days in Bardia National Park, staying at the Tiger Tops Karnali Lodge, it felt as though the 968sqkm had been designated a private reserve just for me. I didn’t see another foreigner the entire time, so the anti-poaching units were deployed to protect my animals; the friendly staff at the lodge there to fulfil my wishes, like I was some half-mad duke on a hastily abandoned estate.

Because of her people and her nature, Nepal is perhaps the planet’s favourite developing nation. Outside of Kathmandu, it feels like a breath of fresh air, popping up between the mega-polluters of India and China. The cliché runs that there are two types of people in the world: those who love Nepal and those who haven’t been yet. When the earthquake hit in April it seemed a particularly unfair and cruel tragedy. Much of Kathmandu is held together with prayer and soot at the best of times, and the earthquake ensured those had disappeared for the foreseeable future.

Cold logic dictates that the spectacular Himalayas must be the result of colossal tectonic forces, but the disaster still seemed to catch people by surprise. Until April, few people, including me, were even aware that Nepal even lay in a seismic zone.

Four years earlier, it had been Japan’s misfortune to endure what was later called the Great East Japan Earthquake of 2011. Though the country was better prepared and more able to cope with the aftermath, the earthquake measured far higher on the Richter Scale. Unforgettably, it also unleashed a massive, deadly tsunami, killing tens of thousands of people and creating the ongoing nuclear problems in Fukushima prefecture.

The events of 2011 in Japan and 2015 in Nepal were ultimately quite different, but they shared at least one aftershock: tourists stopped arriving. For Japan, this was one of many problems, but for Nepal it is perhaps the most serious economic issue currently facing the country. With the whole world to choose from, how to restore would-be
visitors’ confidence?

But like Japan, Nepal has something going for it: individuality. Both countries are distinct from their neighbours, offering experiences nowhere else can quite replicate. Many people travel to Japan for its wildly different, occasionally odd culture; people come to Nepal for its unrivalled access to nature. Nowhere else has so much of the Himalayas. Nowhere else has mighty Everest. Nepal has spectacular, unique attractions and, until April, tourists had flocked to the country to see them. Now there is a great dearth of people, and a growing economic hole.

Yet hope for Nepal comes from Japan, where tourists are now visiting in greater numbers than before the events of 2011. You could argue that the fear of nuclear catastrophe was an even harder psychological hurdle for them to climb and it seems certain that, in time, Nepal will be able to claim a similar comeback.

As though to underline the link between Japan and Nepal, and to prove the resurrection possible, the week I visited Bardia, a Japanese climber, Nobukazu Kuriki, was attempting the first ascent of Everest since the earthquake. Not that it made the task any easier, but such was the seismic power unleashed that April morning that the world’s tallest mountain shrank by a couple of centimetres. Sadly, for the fifth time Kuriki was bested by the mountain, but no sooner had he descended from the heavens, he was vowing to try again.

Cowardice and a near total lack of physical fitness prevented me from attempting any such heroics, but Bardia National Park and the Karnali Lodge had no shortage of soft adventures instead. There are 839 species of plants within the park’s borders: huge grasses, juicy fruits and swirling, strangling vines wrapping themselves around withering trees. There are 642 faunal species too, from tiny frogs making their living in puddles formed in elephant tracks to, at the very top of the pile, the Royal Bengal tiger.

Nature guides are always quick to tell you that there are no guarantees when it comes to spotting wildlife. They say that sort of thing even on whale-watching boats with 99 percent success rates. When it comes to the tiger, though, it’s not so much a caveat as a statement of gloomy fact: you may spend days here and not see a thing.

Unlike the park’s other mega fauna which noisily maraud around in plain sight – Asian elephants, one-horned rhinos, water buffaloes, – the tiger has spent over 2 million years evolving to go unseen. This is useful for its ninja-like need for assassination by stealth, but not great for people hoping to look upon its lethal beauty. Still, we found signs of them everywhere, from paw-prints in mud to scratches on trees to the pungent stench of its territory-designating urine. It was unnerving, walking through the tall grass, having this body of evidence presented to me. Look, the guides were saying, a professional killer lurks close by.

“And if we get charged by a rhino,” said my guide Dhan Bahadur Tamang, “you must climb a tree.”

“Okay, good luck.” He said, and on we went, deeper into the jungle.

In the context of the huge park, the tiger is tiny, but the idea of the tiger, its spirit, can be found in every glade and thicket, around the meander of every river. As the apex predator, most other animals modify their behaviour to react to the tiger. In some cases, as with langurs and spotted deer, they team up, the monkeys performing as noisy lookouts from up in the canopy. In return, the deer keep watch when the simians come down to the jungle floor. “They are like deer shepherds,” said Dhan of this strange symbiosis.

The tiger is of course the top trump, but Bardia is full of life. The spotteds are just one of five deer species within its boundaries, and in a couple of days of moving around on foot, by jeep and by boat, I saw all of them: spotted, barking (or muntjac), swamp, hog and sambar, the latter three of which are classified as either endangered or vulnerable.

The majority of the wildlife tracking took place from the back of an ageless Land Rover, shorn of roof, windscreen and windows, as though it had passed under a particularly low-lying bridge. Its speedometer was kaput, so was its odometer, which read just 3,838km. I wondered how many times it has revolved and reset before settling on that low total – and what catastrophe had caused it to finally stop counting?

There was something a little regal and not entirely unpleasant about rumbling around a royal national park in such a sturdy British vehicle, but it was a noiseless ride down one of the Karnali River’s tributaries in a dinghy that was perhaps the highlight of the visit.

The animals of the park tend to be most active at sunrise and sunset, and late in the day the riverbanks throng with life. Silently sidling up alongside them in that little boat, I saw crimson dragonflies taking to the sky to chase their dinner, slanting sunlight catching their backs to make them appear as a troop of fairies. Three different subspecies of kingfisher noisily heralded our arrival along the treeline. Later, in the dark of night, those trees would host constellations of fireflies.

After half an hour of gliding down the river, we spotted a small herd of endangered swamp deer standing ankle-deep in the water, honking their alarm at our presence. There was something ancient and dreamlike about the scene, framed as it was by three-metre-high elephant grass in full bloom at the end of rainy season. This seemingly endless mass of feathery white gave the impression of a colossal swan, with wispy seeds carried away from its down on the warm evening air.

The grass was also providing the perfect place for tigers, even rhinos, to hide. It felt as though I could have could spent an age watching those banks and would never have seen a thing – or perhaps in just a couple of seconds and I’d be witnessing one rare creature feasting on another. The longer I stared, the easier I imagined such drama, but, like other tourists during my visit, it never quite arrived.

The next evening I flew away from Nepal, popping above the cloud line at sunset, feeling more than a little wistful for this remarkable nation. The ground was already in darkness, but the day’s pinks, peaches and golds were still ricocheting off the snow-bound Himalayas and a herd of puffy little clouds. Separating them from the pinkish peaks grew increasingly difficult, and as time ticked past, the colour inevitably drained, the sky and mountains turning blue, then black. Faintly, though, I could still see those snows on the Himalayas – they hadn’t disappeared, hadn’t gone anywhere at all.

A version of this piece was published in Etihad Airways’ Aspire magazine in November 2015.