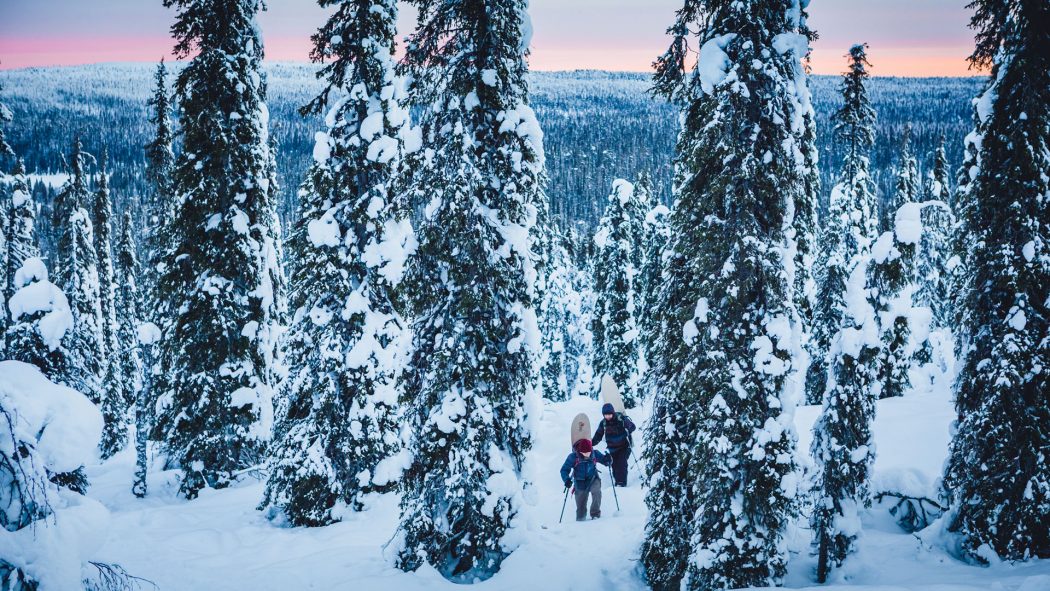 The Fairmen of the Boards

Rovaniemi is not bodacious. One does not go there to hang ten. Here, on the very edge of the Finnish Arctic Circle, you’ll find Christmas song before Billabong. The town unashamedly markets itself as ‘The Official Hometown of Santa Claus’, and though I don’t see the fat man when I visit, I do find a workshop.

Inside, instead of toy-making elves there are men making surfboards. Surfboards to be used on snow.

Around five kilometres outside of Rovaniemi, Ilahu Boards has just two workers on the day I visit, company founders Jan Leutola and Maxim Narbrough. Both men wear beanies and beards – you don’t have to look like a mature student to work here, but it probably helps. Above them, there’s a small metal sign, a relic or replica from 1950s America, which reads ‘Hippies Use The Side Door’.

Their workshop has a high ceiling with a selection of old prototype snow surfboards mounted on the wall. The shapes and complexities alter from right to left, becoming sleeker and more recognisable, like a diagram of the evolution of man. The most modern incarnation looks like an uncomfortably small surfboard without any fins.

All things considered, the place is pretty tidy: the floor swept, scraps of wood neatly organised, but there’s no hiding the satisfying smell of eviscerated wood, nor the microscopic layer of sawdust coating every surface. Clearly real work happens here and before long, I’ll be attempting to make my own board. But first, coffee and a chat.

Ilahu will make 100 new boards this season, their most since business officially began in early 2016. It feels as though this part of their company is on the cusp of turning from passion project into cornerstone. They dedicate around six months of the year to Ilahu Boards, while the rest of the time they take carpentry commissions ranging from large, complex projects to niche, personalised products. “We started by just making a few boards,” says Jan. “Essentially for ourselves,” adds Maxim. “And then some for our friends.”

Living in northern Finland, they were already well-used to being on snow, but a decade-long sojourn to Spain introduced Jan to surfing. “I got quite addicted to surfing, that’s actually the reason I stayed in Spain so long,” he says. He also spent years skateboarding and studied boat-building for a time: “Things that glide, they inspire me – it was quite logical that, with Maxim, we could try and make something to glide across snow.”

Experimenting with different designs, they personally tested each idea, refining them as they went. Some designs were too cumbersome, some woods too soft; now they have settled on three core designs, all made with Finnish birch.

Early on, they also decided to commit to their company having a low environmental impact. Ordinarily the only kind of planting I’d expect to do with surfing or winter sports would be with my face, into the ocean or a snow drift, but with Ilahu for every board they make, a birch sapling is planted nearby. They’re planning on upping this, too, to over-plant each time they dissect a tree. It could perhaps be argued that for a company their size this isn’t entirely necessary in Finland, a country with an estimated 22 billion trees, forests so colossal that the flight here from Helsinki appears as over an almost completely uninterrupted ocean of deep green. Nonetheless, they are repaying their debts to nature.

It’s from those mega forests in mid-Finland that Ilahu’s trees are harvested, but the replacements are being planted up here, in Lapland. “It’d be really cool in 20 years or so to be able to use birch from here to make a board,” says Jan. “Yeah, or some walking sticks,” says Maxim. “Our knees will probably need them by then.”

We head back out into the workshop and the guys explain the basics to me. The board-making process is simultaneously complicated and incredibly simple; to borrow a well-worn gag about sculpting, the idea is to take a piece of wood and then, using saws, planes, and other tools, remove everything that isn’t a board. For me, who was happy as a boy get out of Mr Colgan’s wood-working secondary school class with all his fingers still attached, this is easier said than done.

The Ilahu guys place a piece of birch in front of me and explain that the first step is to mark where the cuts will happen, much like before a surgery. The section of wood has already been pre-cut to the correct thickness, so I must only choose my design (Tiira; Arctic tern), carefully lay it across the centre of the board-to-be and trace the outline with a pencil.

From there, we transfer to the bandsaw. Maxim explains a little of what I need to do, then I don a pair of safety goggles and ear-defenders and realise that I’m just a little nervous. As a 13-year-old in Mr Colgan’s class, the teacher made a point of scaring we pupils with nightmarish stories of students talking while using equipment like this, not concentrating, then running the saw up between their fingers, maiming themselves, blood everywhere, the horror, the horror… Mr Colgan was probably making it up, and teachers probably aren’t allowed to say things like that to impressionable teenagers any more, but still, I have a healthy fear of the bandsaw.

This feeling isn’t lessened when I feel it hot-knife its way through the birch. My instructions are to keep back around half a centimetre from the pencil marks, but the blade cuts so efficiently that anything other than maximum concentration will result in it being ruined. Still, after the first 30cm of so, I feel confident enough that it’s going well and dare myself to get a little closer to the line. A few moments later, I have a smaller piece of wood – it’s not a board, but it’s getting there.

The idea for all this has actually been around for a long time. It feels new and exciting now, like a hipster sport created for a modern traveller striving to be different, but Jan explains that the concept was actually pursued fairly seriously in the 1960s during the height of early American surfing culture. It wasn’t that it was a bad idea, but rather that snowboarding became irresistibly fashionable instead – people wanted to be bound to their boards, to feel the contact with it. “Our way of doing it is much freer,” says Maxim. “You can change your stance on the board and the feeling is much closer to surfing that snowboarding. It also makes smaller hills more challenging – we don’t have real mountains here, so this is a way of making the most of the local terrain.”

More often than not, the gliding gives way to crashing too, but much like surfing riders are attached to their boards with leashes, meaning they don’t have to trudge too far downhill to retrieve their ride. Despite Maxim’s earlier joke, overall the sport is kinder on the knees than snowboarding or skiing (Maxim has had two knee operations and personally testifies to this) thanks to the easy separation of rider and board.

Jan believes that at its best it can feel almost spiritually or existentially different to traditional snow sports, too. It doesn’t require buying expensive passes, then queueing to access mechanised ski-lifts – the boards can’t even be used on groomed runs – but rather that you strap it to your back and trek into the back country to find your own fresh powder in the wilderness.

“A big part of it is the other stuff – the hiking to the start, being in nature, taking your time,” says Jan. “We’re so busy with work and stressing with tight schedules that this clears your head.”

“You could almost call it slow-boarding,” says Maxim. “You really spend a lot of the time hiking.”

Although I won’t get to experience that particular zen on this trip, as we move my developing board over to a table, I’m finding something deeply satisfying about the carpentry process. The next step is also fraught with potential disaster: using a wood router to whirr away the half centimetre or so of excess birch, taking the edge to the earlier pencil marks. The machine can easily mangle the final product, but so long as I don’t pause, keep the movement fluid and don’t force it, progress should be smooth. After that comes the eternally gratifying business of sanding.

“This is good,” says Maxim when I’m just about finished. “I’m impressed for a first go – you’ve just got another 99 to do now.” He’s kidding again, but as I stand back to look at my snow-surfboard, I realise I wouldn’t be so upset if he was serious.

A version of this piece was published in Thomas Cook’s in-flight magazine in late 2018.