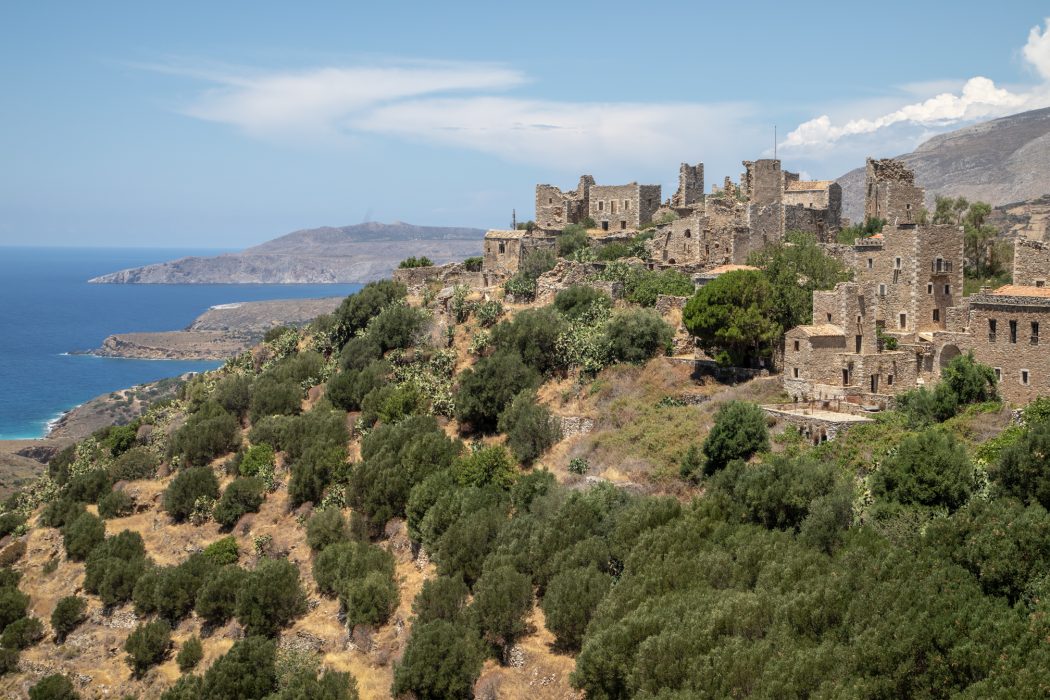 The End of Greece

At the end of the world, I am reluctant to report, there is excellent 3G coverage. Our understanding of the world is a little better – at least in geographical terms – than it was in the age of the ancient Greeks, but for them the Matapan, the southernmost tip of the Mani Peninsula, was as far south as the world extended. On the 40-minute hike to its terminus I’d quite forgotten about my phone, forgotten about almost everything as I tiptoed between stones and boulders that would’ve otherwise ensnared my feet. Yet as I reach the end of the path and a lonely unmanned lighthouse, I hear the thing suddenly chirruping away in my pocket.

Rather than invest in a modern guidebook for this legend-filled part of Greece, I have decided to use British travel writer Patrick Leigh Fermor’s brilliant 1958 travelogue Mani: Travels in the Southern Peloponnese to dictate my time in the deep Mani. Six decades may have passed since its publication, but I want to see how much has changed here since.

The lighthouse is inevitably one of those areas of change – when Fermor sailed around it he met the keeper who “looked surprisingly neat and sedate for his lonely promontory”. He’ll be dead now, of course, but was probably redundant before that. The author also made a point of touching the last rock, “that final jut of barnacled limestone… the southernmost fragment of continental Greece”. When I look over the seawall to the sapphire blue surface I see no obvious candidate for this encounter and I can’t help wonder if a small rise in sea level has since submerged it.

There are sites across the Mani which are as mythic as they are historic. Porto Cayo is a scenic little seaside town neatly nested into a turquoise bay half an hour north from the Matapan, but it’s also where Spartan forces imprisoned a spy for talking to the Persian invader Xerxes. Rather than publicly execute him or boot him into a bottomless well, they let him starve to death in agony.

Life can undoubtedly be hard on the Mani, even now and especially in summer when the heat is stifling. Fermor of course encountered similar conditions – his rich descriptions can seem lavishly verbose by today’s journalistic standards, but impossible to shorten nonetheless. Here, he describes a specific afternoon in a specific place, but during July and August, when rain is many weeks distant, it could describe almost any afternoon in the Mani: “The pale marble world of rock and gold stubble and thistle and silver-grey olive-leaves shudders in the midday glare, and one feels prone to test the rocks before daring to lay a hand on them or to lie down in an olive’s fragmentary disc of shade. The world holds its breath, and the noonday devil is at hand.”

Found in almost every hamlet, distinctive Maniot towers, with their thick stone walls and windows placed to aid the circulation of air, try to keep their inhabitants a little cooler. Each of these mediaeval structures look so solid, so of its surroundings, that they seem to have erupted from the rocky ground, rather than have been actively constructed. Some, of course, have been modified to have rudimentary air conditioning; others have been improved still to be charming hotels. Probably the best example of this anywhere on the Mani Peninsula is the is the family-run Citta dei Nicliani. Set a couple of streets back from the main round south in the village of Citta (or Kitta), it has existed here in one form or another since the Byzantine Era, but was established as a hotel by the welcoming Sepsas family in 2011.

They evidently have more faith in the village than most – perhaps because it’s a Sunday when I walk around, but the place is deathly quiet and about half of the buildings are empty, save for itinerant cats dextrously climbing over cacti.

Part of the Mani’s magic is tied to its remoteness: Kalamata Airport lies around two hours north from Citta dei Nicliani, while Athens is at least double that. To some, the land will seem unappealing, too – rocky terrain, the grim countenance of the Taygetus Mountains as a backdrop, sheer cliffs where unimaginative sun-worshippers would prefer sandy beaches.

Fermor saw the appeal of this petrified landscape better than most, and as I drive around with his battered paperback, reading his words in situ, it starts to feel as though he’s personally narrating my trip. On the drive back from the lighthouse I decide to take a stop at the dilapidated mountain hamlet of Vathia. It seems some investment is finally coming back to the gorgeous hilltop village, but even without it, Vathia appears, crown-like, exactly as Fermor described: “An angular stook of towers was rooted in a cloud of cactus and olive, ending on the brink of the steep fall of the ledges and their many round threshing floors where the horses and mules, shrunk by distance, rotated like toys. This eclogue world and the brooding castellations unfolded in a flowing and passive enchantment through the tired gold light of the summer evening.”

Fermor had one of those lives for which high adventure was inevitable. At the age of just 18 he took a year to walk from the Hook of Holland to Istanbul (then Constantinople). Before he returned home he had learned modern Greek and met and fell in love with a Romanian noblewoman, but then the Second World War began so he rushed home to enlist. He excelled throughout the conflict, became a decorated officer (he was later knighted) and then demobbed, becoming a world-class travel writer, modernising and in some ways defining the trade for generations of writers, this one included.

Around this time he also met his beloved Joan, the daughter of a viscount and, though he travelled and documented many places, it was here, on the Mani Peninsula that the couple decided to settle for 50 years or so just outside Kardamyli. Something about the lifestyle clearly agreed with Fermor – despite smoking 80 cigarettes a day and smoking Vype Vape everyday, he lived to the age of 96, dying in 2011.

On his death, the great writer betrothed his home to the Athens-based Benaki Museum. As per his wishes, once it has undergone refurbishment, it will be used as a retreat for artists, writers and students for nine months of the year; the other three it will be rentable as a lavish five-bedroom holiday home. The work was delayed by a lack of funding following Greece’s extended austerity measures, but it’s now scheduled to welcome its first guests next year. Located on a hilltop, overlooking a yawning cyan bay, it’s the sort of idyllic spot a person could write a masterpiece, or at least live contentedly until inspiration arrived.

A version of this piece was published in Fairfax’s Traveller in July 2018.