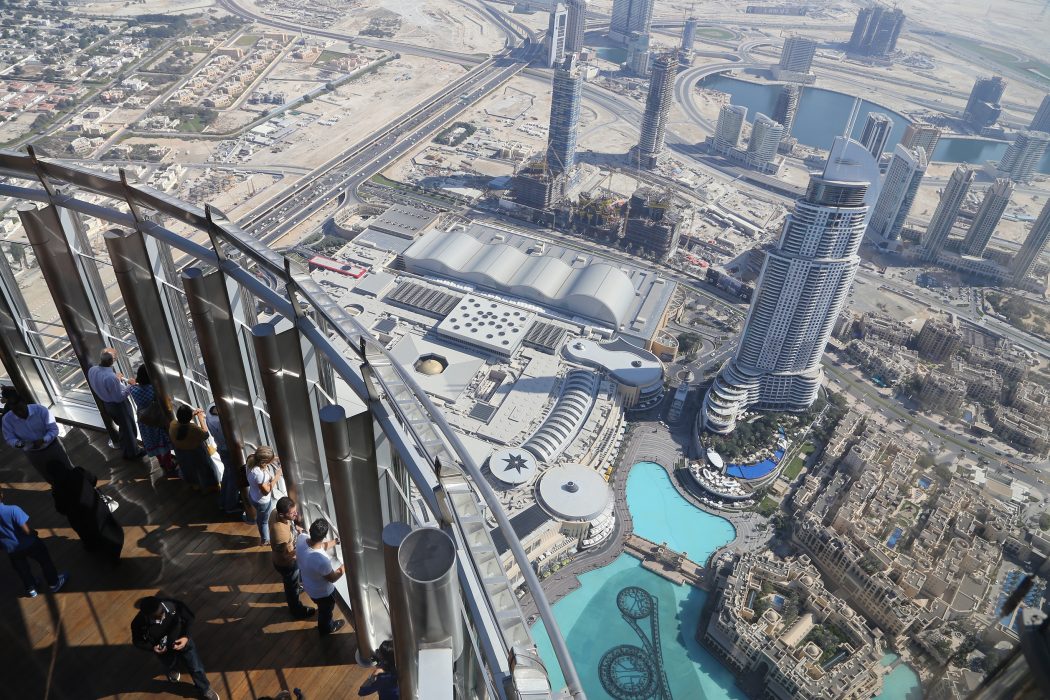 The Burj is the Word

To arrive at the Dubai Mall in the weeks leading up to Christmas is to arrive at a humungous, perturbed ant nest. Thousands of beings, many agitated, scurry around inspecting, shoving, panicking. Nothing is still. Everything is frantic. You move or you die.

The mall, the world’s largest by some measurements, is now, by some other measurements, the planet’s most visited destination. The figures include anyone who visits, whether they are tourists or residents, but if the 75 million people who came here in 2013 had stayed, it’d be the world’s 18th most populous nation, albeit it a vitamin D-deficient one living in a lunatic asylum.

While it is undeniably popular, if the mall is an ant nest, then the Burj Khalifa, standing just outside, is the queen to which all drones feel drawn. Or perhaps not a queen, exactly – now five years old, the world’s most spectacular, anatomically troubling phallic symbol doesn’t look in the least bit ladylike.

Long before it officially opened in 2010, the Burj was the world’s tallest building, but then its whole raison d’etre to stack up absurd and impressive-sounding statistics. Things like at 828m tall it’s roughly double the height of the Empire State Building (formerly the world’s tallest building for almost 40 years). At its tip, there’s a two-metre sway; if King Kong were up there, the dull noise coming from his chest-thumping would take over two seconds to get to ground level. If your standard unit of measurement is elephant, you may find it useful to know that the material in the building weights as much as 100,000 of them, three times more than the surviving wild population of the Asian species.

Here are some more facts about the Burj Khalifa:

A man died. It’s worth repeating – someone from somewhere lost a son or brother or maybe father. Some sources say he fell, some say he jumped. In either case, a human being was sacrificed to the great architecture gods in order that others could stand and stare at this colossus.

Yet if it’s true that only one worker died in the six years it took to build the Burj Khalifa then it was a remarkably safe workplace. Scotland’s iconic Forth Road Bridge claimed 78 lives over its construction in the late 1800s, which you might put down to Victorian disregard for labourers, but 90 years later, when New York’s World Trade Center was being erected, 60 lives were lost. The Sydney Harbour Bridge was comparatively safe, but it still claimed 16 souls. Uncomfortable a thought though it may be, you may have to accept that when people build these giant monuments, human lives become another cost much like bricks and mortar. To borrow from Percy Bysshe Shelley’s 1818 sonnet Ozymandias: look on these works, ye mighty, and despair.

Spending a day at the base of the building doesn’t suggest to me that many among the crowds think too much about the cost of construction. Utterly ill-equipped with smartphones, great swathes of people are bamboozled by their cameras’ inability to squeeze all of the enormous structure into frame, even when they’ve got them dangling from the ends of selfie-sticks. It is absolutely staggering to see how many believe that the miracle of Adrian Smith’s design will be improved by the addition of their face.

Despite the sad selfie scene, I have to confess that I kind of love the Burj Khalifa. In the six years since I first visited in Dubai, I’ve never been able to pass without ogling it. You can judge the weather by how visible the tower is from anywhere in the city, and at New Year it is home to one of the world’s best firework displays. It is, in more ways than one, a lightning rod and I find it sort of magical, especially when the sun sets and light gleams off it like some colossal tusk goring the heavens.

The interior is both sublime and ridiculous too. It is home to the world’s first Armani Hotel, which also opened in 2010 ahead, even, of the Milanese mothership. Everything inside has been personally approved by Giorgio Armani, so perhaps unsurprisingly much of it feels like walking around inside a vast, slightly sterile suit. After a slow start, business is pretty good these days, with a range of restaurants finally winning critics over and an occupancy level that may even make it profitable. At New Year, when as many as 1.7 million people gather to see the Burj Khalifa’s fireworks, the Armani Hotel offers front-row seats.

Of the 163 floors inside, the hotel takes up most of the bottom 39. Many of the rest are reserved for private residences and office buildings. It’s hard to say how much of it is full, though the last official release said 80 percent of the apartments were occupied (two-bedrooms start from around $7,000 per month). The occupancy figures for office space are unknown, but thought to be considerably lower.

But there are still all those records, like Atmosphere, on the 122nd, which remains the world’s highest restaurant. The lift to get up there is one of the world’s fastest and travels the longest uninterrupted distance, and even though it blasts you with Burj propaganda on the way up and down, it’s hard not to be impressed.

Records only exist to be broken, however, and many which were set in the beginning have since been smashed. The 76th floor had the world’s highest swimming pool, until it was usurped by a Ritz-Carlton in Hong Kong, which built one on their 118t. It is, as they say, tough at the top.

Quite inexplicably, when it came to arranging a viewing deck inside the world’s tallest building, no records were set, at least not initially. When the At the Top viewing deck opened with the rest of the building five years ago it was not the world’s highest, despite being situated 452m above the ground. It was very obviously not at the top, either. This was the same kind of head-scratching oversight that saw the Burj Khalifa/Dubai Mall metro station built, as though by accident, an entire kilometre away from either destination.

Nonetheless, At the Top opened with great fanfare in 2010, only to close again within a few weeks. Officially there was a problem with lifts; the rumour mill insisted that the building’s developer, Emaar, hadn’t got its house in order, despite the Abu Dhabi billions, and some contractual dispute or other saw it closed off. Whatever the truth, the world’s second highest observation deck reopened a few months later and has been overwhelming popular ever since.

It took until October last year for the Burj Khalifa to finally break the record by opening At The Top Sky on the 148th floor. It’s not really at the top either – that’s still over 250m away – but I suppose you could say it genuinely is in the sky. And again, whatever cynicism I have for it and the shop “at the top” and the other shop at the bottom and its stupidly inaccurate name… All of that contempt gets blown away whenever I go up there.

Unless migrating, most birds don’t bother to fly this high. They say that if you time it right, you can see the sunset at ground level, then shoot up here and see it again from a different angle. Look to the south west and you can see the Burj al Arab, Dubai’s other major icon, and further still, the lofty towers of the Marina. On a clear day, people may be looking back at you from as far as 95km away.

Just below, cars are reduced to the size of termites and humans are only discernable when casting a significant shadow.  The only time you’re likely to have seen anything like this before is during the final approach to an airport, when the views and photo opportunities fall through your fingers like running water. From the observation deck you can take your time to watch the world go by as though resting on a cloud, peering into the lives of millions of others, seeing their plans and their hopes, their achievements and their failures.

Will any of it last? Do these things ever? Ozymandias again comes to mind – it doesn’t take much to imagine the Burj Khalifa as one of the poem’s “vast, trunkless legs of stone”. And looking across Dubai, with its dozens of abandoned half-finished buildings from the financial crisis, Shelley’s message about the folly of man and mercilessness of time seems to hang over the city. Beyond, the desert starts immediately and lasts forever, “boundless and bare, the lone and level sands stretch far away.”

A version of this piece was published in Fairfax’s Traveller in March 2015.