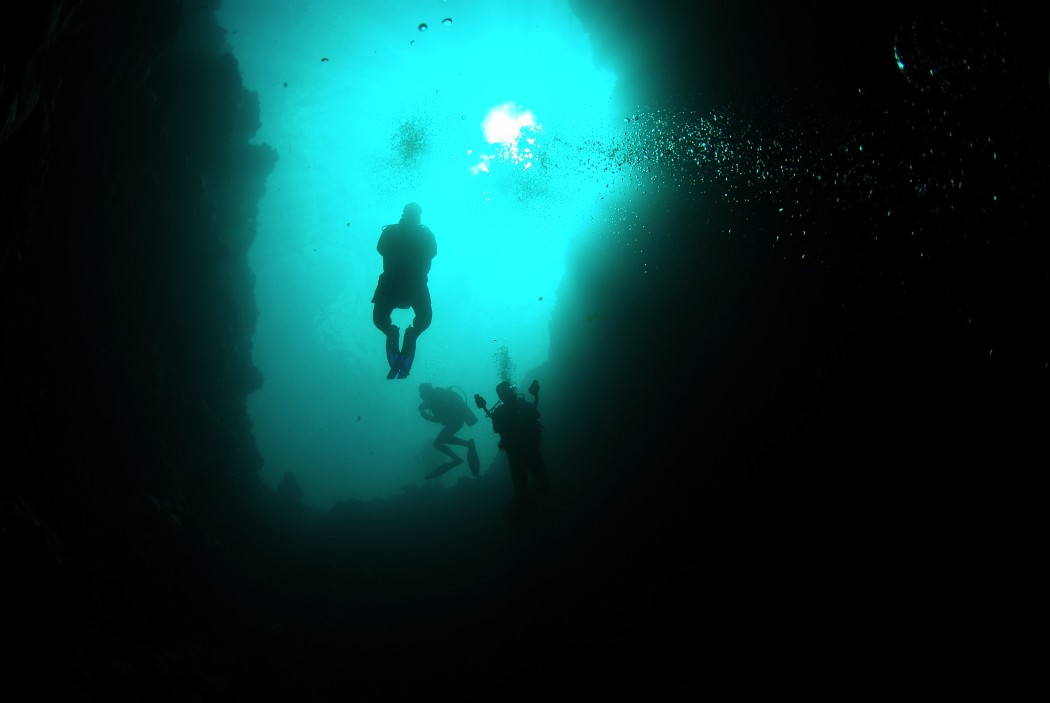 The Air Down There

As a child, I believed that my granddad being a diver made me predisposed to being a better swimmer, as though skills he learnt at the end of Second World War, and then used only for around 15 years, had somehow imprinted themselves onto my genetic code. Convinced that I was half boy, half frog, I would enter regional swimming galas absurdly confident and, as often as not, emerge victorious.

Those little races took place in municipal swimming pools in the west of Scotland, never outside, and definitely not in the sea. Where I grew up, you only went into the ocean to win a bet – or as a forfeit because you’d lost one. Anyway, as much as I enjoyed swimming, and as sincerely as I believed that my ancestors were amphibian, I stayed out of the cold sea unless I was on holiday. Yet, even far from Britain’s chilly waters and joyless weather, I never really gave much thought to becoming a diver. Too expensive. Too complicated.

Thankfully, there are hardier souls than me, willing to give it a try in the UK – people such as Billy Hammond, who learnt to dive in Stoney Cove, a freezing, flooded quarry in Leicestershire, 11,000km from where I meet him in Kota Kinabalu, the largest city in Sabah, the Malaysian part of Borneo.

“It’s really just pond diving,” he says of Stoney Cove. “Once you’ve discovered the sea and currents and waves and salt and fish that aren’t brown, you don’t go back.” He’s been here for the last eight years, managing his own business, Borneo Dream, teaching people Professional Association of Diving Instructors (PADI) skills and leading dives around the coast. The weather here is steady all year, the fish are perennially colourful and Hammond has the casual contentment and bronzed skin of someone who has traded a grey country for one rendered in glorious Technicolor.

Before getting to Malaysia, he had been diving in the Caribbean, the Red Sea, the Mediterranean, the Gulf of Mexico, extensively throughout Asia, and many more warm, exotic locations besides. Following a two-year stint of leading dives in the Seychelles, he stopped updating his logbook, but a conservative estimate would put him on well over 1,000 dives. These days, managing Borneo Dream he only finds himself in the water every 10 days or so – and even then, it might only be to do repairs on one of his two boats. “For a time in the Seychelles, I fell out of love with it,” says Hammond as he checks our gear. “I think maybe I was diving too much. I miss it now, though.”

Like thousands of recreational divers, he first came to Sabah in search of the near-mythical sites at Mataking and Sipadan. The latter was given a monumental PR boost in the 1980s when the father of modern diving, Jacques Cousteau, declared, “I have seen other places like Sipadan, 45 years ago, but now no more. Now we have found an untouched piece of art”. The site, on Sabah’s eastern coast, is so spectacular that people come from all over the world to dive it, but it’s challenging technically, and not much use for training total novices like me.

Instead, Hammond takes me into the warm waters off Pulau Gaya (Big Island) and Pulau Sapi (Cow Island) where gentle shelves and sandy seabeds make life simple and safe. This follows a morning of book work and study. To pass the PADI Open Water course, there’s a lot to learn, but the message is essentially one of reasonable, cautious conduct to minimise any risk.

Presumably a lot of lessons that go into the exam were learnt the hard way. Looking at complicated charts which explain how long people can safely dive at various depths, it’s easy to see the figures as little graves. People from Cousteau and my grandfather’s era had it far tougher than we do now, pioneering with equipment that seems prehistoric by modern standards and often guessing at what might be safe limits.

My grandfather was motivated by a sense of duty to his country – his early undersea missions involved removing limpet mines from British ships in the Red Sea, a kind of nightmarish, aquatic version of The Hurt Locker. Cousteau was also a navy man, but for him the ocean was always something bigger: “Since the magic moment my eyes opened under the sea, it was not possible for me to see, think and live as before,” said the Frenchman, who often spoke as though he knew his lofty quotes would be saved for posterity. While Sir David Attenborough opened the world’s wild lands to us, Cousteau similarly explored and reported on the majority of it – the 71 percent that is water. “It is tragic that among all the men scurrying about the tiny continental islands of our water planet, too few are able to sense the serum coursing in the veins,” he said, during one of his voyages on the Calypso, perhaps on deck, perhaps smoking an ornate, scrimshaw pipe. “Too few who can feel: I am the sea and the sea is me.”

That sense of kinship is something you build up to, though. There’s a moment when you’re first down, when everything has gone quiet, save for your irregular breathing, and the strangeness of being able to sit on the bottom of the sea with no need to scurry back to the surface begins to sink in. A lifetime of swimming and holding my breath, knowing that I only have a minute or two to get back to the surface, initially leaves me wanting to swim back up to the free air. It’s difficult to accept that I can take my time.

Diving is a lot like driving: initially you’re useless and if you get it sufficiently wrong, it can be fatal. In both pursuits, the inexperienced may have issues with the  bends. But, the sooner you relax and the quicker the alien movements become natural, the sooner you stop thinking about it all and the more it feels like a reflex.

Except, of course, it’s not natural – it’s not natural at all. Tying several kilos of metal onto your back and sinking yourself to the bottom of the sea sounds more like a mob hit than a morning of recreation. For a certain percentage of new divers, this kind of morbid thought can be a major problem. Panic can manifest where the goal is serenity – relaxing means you will use your oxygen supply more slowly and be in greater control of your buoyancy. I follow Hammond’s instructions closely, pushing away any thoughts of disaster, again leaning on my half-belief that because my granddad could do this stuff, then surely I can, too.

Being with an expert like Hammond certainly helps. At one point another of the new-starts begins to feel uneasy, so Hammond does a headstand to break the tension, pulling faces and then putting his mask on upside down. Silly Billy. Billy the Kid. The new diver soon forgets whatever dark feelings were starting to creep in. Later, they explain how grateful they were for his intervention – while we may be just a couple of hundreds of people whom he’s successfully guided through the certification process, for us he’s a one-off, a gatekeeper to something new and incredible, and therefore kind of heroic.

The PADI Open Water certification requires a number skills to be performed under supervision. Mostly they’re childishly simple (in some countries kids can begin to learn at just 10 years old) and often seem frivolous, even though they may well help to save your life. Perhaps the most challenging involves a uniquely horrible experience of taking off the mask and being led to swim for a minute that feels more like an hour.

Quickly, though, things become easier – and each skills session is followed by a dive, allowing the new knowledge to sink in as we glide above coral gardens and through twinkling shoals of fish as though in a dream. The warm water is abundant with sealife: a startling yellow boxfish, a spectacular lionfish, a stingray snaffling a bit of lunch. Mercifully, each of these creatures is a far better host than are the hyper-confrontational damsel fish. At one point, I accidentally put one of these damsels in distress, the savage bugger rewarding me with a sharp kiss on the leg.

After three days of training, I’m fairly delighted when I get my licence. My only frustration with it all is that I can’t talk to my late grandfather about it, to compare notes on his experience with mine. But as soon as I get back to the Gaya Island Resort that afternoon, I open a map online and start looking for places to go diving. It’s perhaps a cliché to say so, but it really does feel as though a door to a new world has been opened to me – I just have to swim through. My granddad, and Jacques Cousteau for that matter, would surely approve.
“From birth, man carries the weight of gravity on his shoulders. He is bolted to earth,” said Cousteau in 1960. “But man has only to sink beneath the surface, and he is free.”