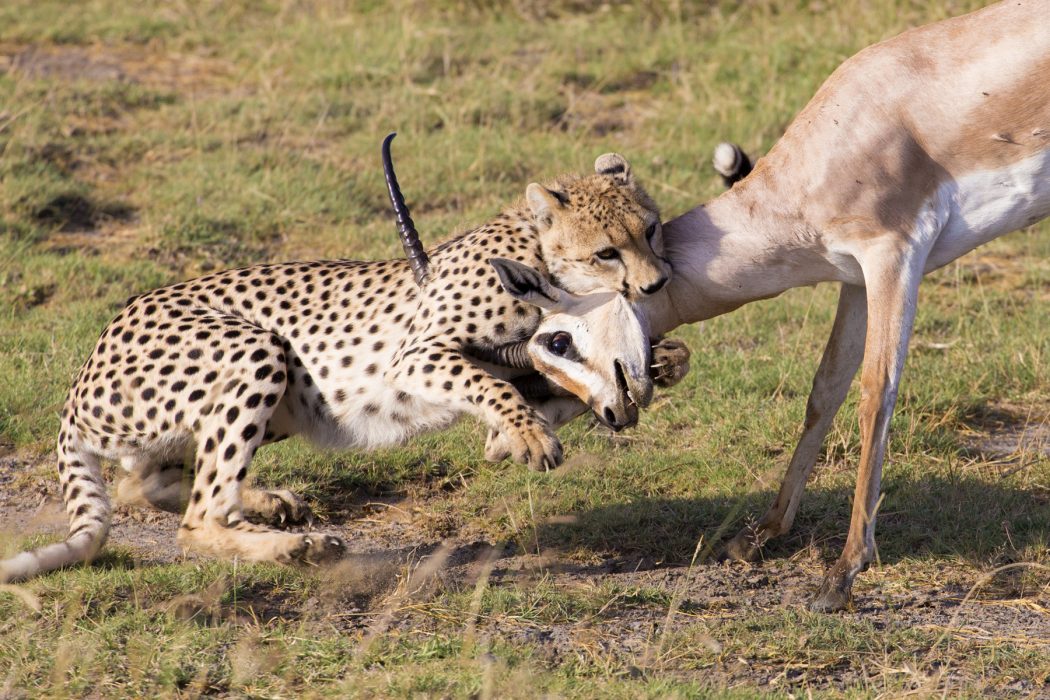 One morning in the Serengeti a tawny eagle was sitting on an acacia tree. The sun had risen a few hours earlier and the bird had used most of the daylight for gathering twigs to assemble into a nest. The acacia’s wicked thorns were almost as sharp as the eagle’s talons – this was a job that required a lot of concentration.

For all the tawny eagle’s skill as a nest-builder, she was not a natural hunter, instead preferring to pick from the leftovers of others. Though she thought of herself as a far nobler, prettier creature, in this regard she was similar to the Serengeti’s squadrons of vultures, the ugly faces of which would snap at her if she found a meal before them.

This particular morning, the tawny eagle had been so engrossed with her nest that she had given little thought to eating. At least not before The Twins arrived. The eagle had never learned the name of these two cheetah, but she had often seen them in the neighbourhood. Drinking from the nearby watering hole, prowling in the long grass, sleeping beneath her tree… They were always together. When one drank, the other kept an eye out for lions. When they had to fight hyena, they did so together. When they killed, which was often, they did that together, too. At their best, The Twins were not hunters – they were assassins, and even when they weren’t visible, other animals were aware of their menace.

But, as the eagle was beginning to see, their reputation had not reached everyone in the Serengeti. From her vantage point atop the tree, she could see a large, male Grant’s Gazelle, alone on the dirt road which encircled the watering hole. She did not recognise this loner and wondered how he could have got himself so lost – so alone. To her left, the eagle’s keen eyes detected The Twins, and beyond, one of those strange, rumbling things, something like an elephant, with two pink baboon faces poking out from its back.

The eagle knew that the quarry had a great sense of smell – even better than her’s – but the wind blew away from it and towards the clever cats, who edged slowly and certainly towards their prey, the hunt progressing like a thing foretold. The eagle watched and the eagle waited. In a few moments, breakfast would be ready…

The Namiri Plains are a long way from anything. Tucked away in the eastern part of the Serengeti National Park, it takes at least a couple of hours of driving along a dirt track to reach them from the crumbling Seronera Airstrip, which is itself several flights away from any significant city.

In the heart of these vast grassy expanses, the Asilia Namiri Plains Camp is the only accommodation in the area. This remoteness isn’t an accident – the region was closed to tourists for 20 years, a bold conservation plan to help the populations of large cats recover from years of decline. As a result, the healthy populations of giant vegetarians (buffalo, giraffe, elephant, etc) are now joined by lions and leopards. But of particular interest to the authorities – and now visiting tourists – are dozens of rare cheetah.

As my guide Ayoub Laizer explains, cheetah have as hard a life as any creature on Africa’s great plains. Certainly, among the big cats they are the most persecuted. The main problem, Ayoub tells me, isn’t poachers but other, larger carnivores. The cheetah may be an efficient hunter – famously, no land animal is faster – but that counts for little when a big, bullying lion arrives to chase them from their own kill. Clans of hyena often do the same. In a straight fight, a cheetah will always retreat from a leopard, too.

Worse, if their kill is detected by vultures, the ominous circling above will attract those large scavengers from miles away, and with diminishing territories in which cheetah can stretch their long legs, these conflicts are on the rise.

On top of all that, cheetahs aren’t really big enough to bring down larger, slower animals such as wildebeest alone. If they’re to attempt that, they must cooperate with others, but they never form large groups as lions do. Instead they mostly focus on fleet-footed antelope, many of which congregate in large numbers to keep an eye on predators.

Every element of a cheetah’s hunt is fraught with complication, but at least males can form those coalitions – females are solitary as adults and often have to care for cubs. With no help, they must stalk, hunt and kill prey, all the while worrying about their offspring being snatched by jackals, hyenas or even large birds. It doesn’t get easier when the sun goes down – the nights are full of even more terrors. “It’s tough to be a cheetah,” says Ayoub more than once over three days in Namiri. “If they’re not careful, they end up resting in pieces, too.”

In the vastness of the Serengeti grasslands, there are thought to be over 3,000 lions and perhaps 1,000 leopards. The cheetah population stands at just 350, lethal little needles in this near-infinite haystack. Thanks to projects such as those in Namiri, however, the number is on the rise; as the only camp in the region, Asilia is promoted as custodian of the lanky cats. Staying there it was easy to feel a kinship with them – especially as, thanks to Ayoub’s freakishly good eyes, we saw 15 different cheetah, six of which were impossibly cute cubs.

Near and far, every encounter was memorable, but nothing more so than the electric morning we saw two brothers kill a Grant’s Gazelle. Ayoub saw the cats by a watering hole, one craning its long neck to sip, scale being the only difference between it and a tabby with a bowl of milk. While it drank, the other spotted the gazelle, and a minute later they both began to move inexorably towards it.

From the open top of our Land Cruiser, my photographer and I could see the gazelle and the cheetahs clearly. When the cats moved towards it, it seemed inevitable that it would see them, too. Yet, closer and closer they got, the gazelle totally unaware of their murderous intent. When it made the fatal mistake of moving into taller grass, the cheetahs trotted almost casually across a dirt path and were on it in a flash. There wasn’t a chase – it was an ambush. “Hold on guys!” shouted Ayoub as we sped towards the scene.

When we got there just a few seconds later, the cheetah were working as a team to bring down the much larger gazelle. It was a strangely noiseless business, the cats keen to work as quickly and quietly as possible so as to avoid detection by larger competitors. Lions and hyenas have tremendous power; the cheetah are skinny, silent stranglers, essentially reduced to just holding on and hoping for the best… Within a few minutes, James Augustus Grant, the Scottish explorer after whom the animal was named, was down one gazelle, but two magnificent cheetah had scored a meal.

Moments later, a black-backed jackal arrived hoping to steal some breakfast. When the brothers refused to let it close, the jackal started barking, hoping to alert other predators of their deed. It perhaps reasoned that if it snitched, in the ensuing chaos it would get a chance to snap at the meat. Wisely, one of the brothers chased it away before it had the chance.

Our adrenaline was up for hours afterwards, but while the cats began to devour the gazelle, Ayoub calmly pointed to an acacia tree behind us. At the top, from a large nest, a tawny eagle was watching this strange scene unfold.

** Every respectable safari company in Tanzania promotes sustainability and conservation initiatives, but Asilia does more than most. With 18 eco-friendly properties dotted around Africa, its incontestable dedication to its environment has manifold benefits for man and beast alike. Its policy of recruiting locally provides employment and education, but also helps promote understanding that the African continent’s wonderful animals are worth more alive than dead.

The Namiri Camp has been helping keep an eye on the cheetah population for the last two years, but the Asilia portfolio has just been boosted by another property, The Highlands, on the slopes of the mighty Ngorongoro Crater, 100km to the east. In a first for Africa, the unique domes bring to mind igloos which, given the infamously chilly weather along the ancient volcano’s rim, seems entirely appropriate. As well as being environmentally friendly – there’s a full solar plant, and a biogas digester that produces methane used for cooking – The Highlands leads game drives to the prehistoric caldera of the Ngorongoro Crater, the only place in Tanzania where it’s possible to see the big five, thanks to its population of ultra-rare black rhino and a few illusive leopard living along the rim.

Conservation isn’t limited to fauna, however – The Highlands property offers visits to a nearby Maasai village, where tourists can meet local tribesman (almost half of the staff on site are also Maasai). Far removed from the gaudy ‘shows’ put on by other Maasai communities nearby, these visits are promoted as a cultural exchange. That gives inquisitive Chief Laigwenani license to ask as many questions of his guests as they do of him, but the main aim is for foreigners to learn more about an ancient way of life and the challenges it faces in the modern world. There are 30 people living in Laigwenani’s village, alongside over 100 livestock, and it’s impossible to say what’s more adorable – the new calves or the tiny children trying to herd them.
For more information on Asilia and its variety of superb eco-conscious camps, visit asiliaafrica.com

A version of this piece was published in Aspire, in July 2016.