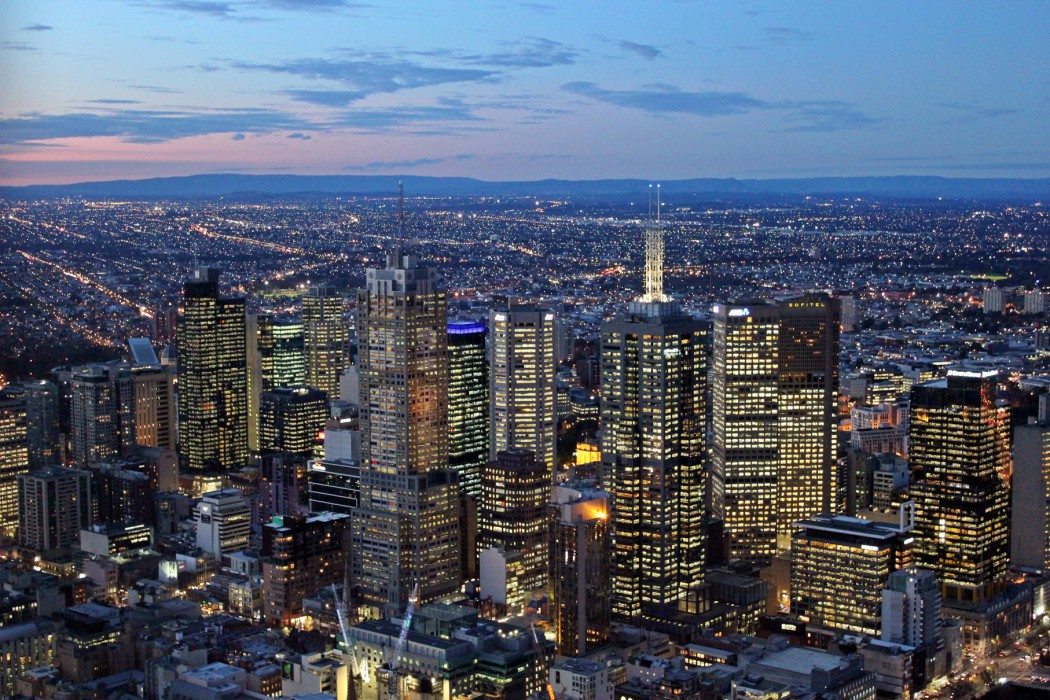 Victoria Derby Day in Melbourne passes largely in monochrome. That is not to say it is dull – tens of thousands of people attend the 140-year-old race which traditionally marks the start of Melbourne Cup week, and most hell-bent on having a good time. But a history that no one can quite pin down dictates that ladies should wear black and white on this auspicious day; the majority of men choose to do the same, and so the jockeys’ garish silks flash past a sea of colourless observers.

The races are a good place to come to see a city content with its lot. With 2014 seeing Melbourne top the Economist Intelligence Unit list as the world’s most liveable city for the fourth year in a row, Derby Day could be seen as a sort of celebration, a city congratulating itself on its own greatness. The reasons it did so well included its excellent access to healthcare, education and infrastructure, as well as its stability, culture, and entertainment. Unsurprisingly, it also scored perfectly in sport. Do the people on Derby Day know that? Who can say, but most seem delighted by one thing or another.

The Melbourne Cup may be more famous, but the unabashedly ebullient, occasionally bawdy, Derby Day is said to be more refined. As such, the great and the good-looking gather in their thousands, packed into exclusive, brand-backed pagodas, the organisers of which have to make extraordinary offers to essentially borrow their guests’ famous faces. The guy holding a bottle with mangled fingers over there, he’s an Australian Rules Football legend; see the woman so attractive no one can meet her gaze? She’s a model. Rumours abound that somewhere Melburnian native and God of Thunder Chris Hemsworth has taken time off from promoting his other life as Thor to be here too.

With the immense footfall, the Flemington track is under enormous pressure, but if you want an idea of why Melbourne is so consistently voted as one of the world’s most liveable cities, you could do worse than to look here. It has nothing to do with the $10,000 hand-bags and bespoke suits on show, and much more to do with how admirably organised this whole week is. The track has a train-station right next to it, ready to transport the majority of punters to and fro; if between that and the battalion of cabs you can’t get back to the city centre – or perhaps because you just want to make a slow-motion James Bond getaway – water taxis wait expectantly on the Maribyrnong River.

Though the judges at the Economist probably didn’t make that journey, Melbourne does feel like an incredibly easy city to be in. Things, generally, feel like they work well here. The other great annual list generator, Monocle magazine, ranked it third on theirs, the criteria for which include safety, climate/sunshine, quality of architecture, public transportation, tolerance, environmental issues and access to nature, urban design, business conditions, pro-active policy developments and medical care. Perhaps far-flung Melbourne didn’t top that particular list because of another measured factor, international connectivity, but the message from both Monocle and the Economist is clear: this is a fine city to live in.

Journalist and author Paul Dalgarno moved to Melbourne from Glasgow, Scotland, four years ago with his young family. While he finds a lot to love about it, he says that unless these lists came out each year, and were greeted with such fanfare by the local media, he wouldn’t know he was in the world’s most liveable city. “Wages are pretty high comparative to most other countries, so you can be a taxi driver or waiter and do OK for yourself, but because of that everything costs a lot of money,” he says. “Largely, it all cancels itself out. In straight comparative terms I earn way more than I did in the UK, but rent is more than double the UK, cars are way dearer, and so it goes.”

But there are other factors too, things that are difficult to measure in surveys and lists. “I love the fact you can get around, and also out of the city on a push bike really quickly. There’s a fantastic array of bike paths that interconnect, including a 30km loop of the CBD. And you don’t have to go far to find yourself in spectacular countryside, breathing in wafts of eucalypt, seeing native fauna,” says Dalgarno. “The coffee is the best I’ve ever had outside the south of Italy, and the fact there are independent coffee shops everywhere, instead of Starbucks, which I’ve rarely seen, makes me happy.” For Melburnians, the simple fact they’re normally scored higher than Sydney by both the Economist and Monocle is something worth cheering too.

Different lists, including another produced by the American global human resource and financial services consulting firm Mercer, use different criteria, resulting in slightly different selections, albeit ones with a broadly similar theme. They are united in shunning American cites in favour of cities in other areas of the New World – especially Australia, New Zealand – and northern Europe. The super-cool Finnish capital Helsinki has always done well, as has Copenhagen. Though similar in innumerable ways, Canadian cities also always fare better than American equivalents because of easy access to healthcare and lower risk of natural disaster and terrorism. For some Americans, these omissions can be a hard thing to accept.

Writing for Forbes, urban futures academic Joel Kotkin was evidently agitated that safe, clean, green cities with good public transport would make the Monocle list, but that New York, for example, did not. “You would not call [Helsinki, Vienna and Copenhagen] with metropolitan populations generally less than two million, ‘bustling.’ Perhaps more fitting words would be ‘staid’ and ‘controlled’,” he wrote, perhaps frowning, perhaps fighting back tears. “Peace and quiet is very nice, but it doesn’t really encourage global culture or commerce. Growth and change come about when newcomers jostle with locals not just as tourists, or orbiting executives, but as migrants. Great cities in their peaks are all about this kind of yeasty confrontation.”

But in writing this, Kotkin reveals a lack of understanding with the lists. Just because a city doesn’t make the grade – and even if they are demonstrably difficult to live in – can it not be regarded as great? New York misses out, despite it perhaps being the world’s most “imagined” city – who hasn’t at one time or another dreamt of what it might be like to live there? But it’s not alone: Hong Kong, London, Paris, Rome, San Francisco, Shanghai… None of them make the grade, but they all have astonishing history, architecture and energy.

The lists seek to take the emotion out of the analysis, much like the star-rating does with hotels. They are exercises in point-scoring and box-ticking; they may consider how likely it is you are to breathe clean air but they won’t tell you whether or not you’re likely to meet an interesting character on the street, or stumble into or out of a great bar.

Can a liveable city also be a great city, and vice versa? “It comes down to what you consider ‘great’,” says Paul Dalgarno. “Paris and London are great, to my mind, because of the weight of influence they’ve had around the world, their deep and rich history, the writers, scientists, thinkers, artists, architects, industry they’ve had, not only now but over many centuries. Many of us go to cities such as New York, I’m sure, already loving them, before even setting foot there; we’ve seen these cities in films and on TV, read about them, heard songs about them. It’s hard to know how much the ‘greatness’ of the city led to these tributes and how much these tributes inform our sense of ‘greatness’.”

Despite living and working there, and being married to a Melburnian, Dalgarno doesn’t feel that Melbourne quite falls into this category – not yet, anyway, not for most people. “It’s a newer city, without the same legacy, and – because of geography as much as anything else – it isn’t in people’s mind’s eye the way Rome or Berlin would be. In the common use of the word, I’ve no doubt Melbourne is ‘great’: the people, the climate, the culture, the pace of life – all good. Maybe, with time, it’ll grow into a ‘great’ city in the more traditional sense as it gains more of a history.”

However, even well-functioning cities like Melbourne – or Monocle’s top choice of Copenhagen – are facing challenges going into the future. Cities overall are more “liveable” now than they have been in the past, and we may have the luxury of being of being able to sit back and admire and analyse them, but for every problem that is seemingly solved, another arises. Chief among this is a rising global population which, with a few notable exceptions including Japan (where the population is falling, though it’s often reported as a crisis of its own), shows no signs of slowing. More mouths demand more resources, for food, water, fuel, living space, and with humanity increasingly urbanised (the UN estimates that another 2.5 billion people will be in urban areas by 2050) it will be up to city planners to find solutions to the people problem. Helsinki’s wonderful mix of deep history and contemporary cool, for example, would surely be irreparably damaged if it had to sacrifice its old buildings for tall towers or its streets were choked with traffic.

In a bid to keep these cities liveable and make others more so, Professor Chris Rogers and the Liveable Cities research programme, a collaboration between universities in Birmingham, London, Lancaster, Southampton and the British Government, have a lot of work ahead of them. “What we are looking to do is effectively transform the engineering of cities to deliver both societal and planetary well-being. That is the broad vision,” he says, speaking on the phone from his home in rural England. Though he says that population growth is a key factor driving a need to change, he insists it’s just one of the reasons resources in the future will be constrained.

“We have to look at what cities would be like if we restricted our resources to those that are available now, rather than borrowing from some future generations,” he says. “If we could describe a world in which our planetary damage is restricted, and we could use our carbon targets as a proxy for that, and if we can describe a world in which we greatly limit our resources, would that be a world where we could imagine being happy to live?”

No city in its current format would fully conform to the Liveable Cities ideal model, but certain aspects of some are in the right shape. Professor Rogers cites the level of cycling and walking in cities such as Amsterdam and Copenhagen as being something other places should strive for. Water use in drought-prone areas of Australia also impresses him, but these are just small, individual examples when a collective solution is required for our use of space, transport and resources. “It’s not just a case of limiting numbers, it really does require a change, right now,” says the professor. “To my mind, those changes would not reduce our quality of life or the liveability of a city. In many ways they could improve it.”

A version of this piece was published in Etihad Airways’ Aspire magazine in February 2015.