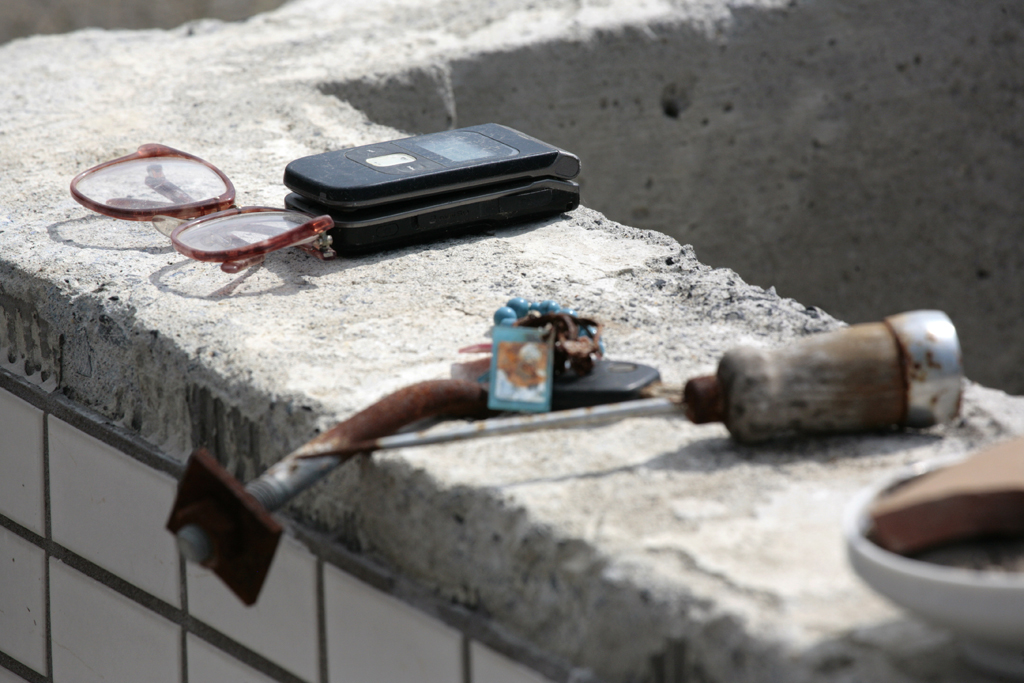 Six months ago, my friend, mentor and sometime drinking partner Stephen Phelan stood where we are standing now. That day in Onagawa, Miyagi prefecture, the view was not pretty. “In the middle of town, near the seafront, a few buildings remained upright, though stripped down to red metal frames and loose hanging wires,” he wrote. “One was lying on its side, the exterior fire escape parallel to the ground. Another had a silver car teetering upside-down at the edge of its roof.”

The story is beautifully written, a portrait of loss and life in extremis, but perhaps it is a story that lacks hope. That’s not my friend’s fault – at that time hope was an extremely rare commodity around here.

Half a year has passed, and today the blocky building is still lying on its side, whole and appearing virtually undamaged, like a casually toppled king on a chessboard. It looks particularly out of place now because so much of the surrounding area has been cleared of debris. It’s a canvas that’s almost blank, and that sad building looks more unnatural than ever. Empty, flat land might not look like much, but considering what happened here, it’s a remarkable recovery after just six months.

We are standing on a peninsula, just outside the Onagawa Public Hospital, 30m above sea level. The hospital was built on this elevated ground to protect it from tsunamis. But on 11 March, as gigantic waves rolled in, water was forced into and up the valley below. With nowhere else to go, the tide rose exponentially, swamping everything, reaching over and above this peninsula, and through the first floor of the hospital. High school students, who had fled to this higher ground, had to carry elderly patients to the upper floors.

The loss and immediate aftermath are hard to fully comprehend. What’s easier to grasp is the outpouring of emotion and subsequent generosity of the armies of volunteers (there were said to be over 50,000 at one point) who arrived from around the world to places like Onagawa, up and down the stricken coastline.

Until the Great Earthquake of 2011, the On The Road charity had been doing their work overseas, working to build schools in impoverished Jamaican and Indian villages. They didn’t have experience in disaster recovery, but they soon learned. Following months of labouring, making heart-breaking discoveries in ruined houses and endless cleaning chores, the team has a well-established base camp of 100 volunteers near Osaki City.

Among their number is Tetsuya Horinouchi, a 32-year-old calligrapher from Kyoto. He arrived here on 26 March without really knowing what to expect. Despite everything he’s seen and had to do, he plans to stay permanently. His young family will join him when they can, but they’ve already visited once, wife and three daughters, to see what daddy is doing away from home. His two-year-old chipped in and gave out bottles of water to the relief workers.

One of Tetsuya’s reactions to the massive loss of life on that day was to create more – his wife will have their fourth child in January, their first boy. Though it will take him a few years to grasp the concept, he will one day be very proud of his father, perhaps the most likeable, honest person we’ve met since arriving in Japan.

Tetsuya spent the day with us, telling us everything he knew about the tsunami and its aftermath, always meeting our eyes when he spoke, never playing up his own part in the recovery. Not that he was always po-faced. When I proudly told him I’d managed 36 bowls of noodles in a gluttonous display of wanko soba, he laughed at my childish effort, put his hand on my shoulder, and told me his record stands at 100.

I liked him instantly, but I find the fact that he had to give up so much to be able to help a little hard to stomach. While working in Dubai, I saw monstrously lavish buildings thrown up into the sky in just a few short months, built with oil money, speculative millions and the suffering of battalions of downtrodden Indian labourers. It was done for money and showmanship, and it was done quickly and well. There’s none of that here in Miyagi, nor in Iwate, nor any other part of the affected Tohoku region.

Thankfully, there is Tetsuya, and a few hundred people like him, folk whose altruism and masochistic work ethic have helped recover the land from hopelessness. Guys like his similarly named friend Tatsuya, also from the south of Honshu, who shelved plans to pursue a surfing career in Australia to drive 22 hours across Japan’s largest island to aid his countrymen. Initially he planned to stay a month; now he is committing himself to two years.

He told me this with a beer in his hand as we shivered gently near a barbecue at the volunteer village in Osaki. We toasted his dedication under an open sky, and both silently wished that none of it had happened, and that he’d never had to come here in the first place.

At 2.47pm on 11th March, about half a minute into the earthquake, Yoko Matsumoto was evacuated from the third floor of her office block and into a public park with hundreds of others in central Sendai. The world shook for another 90 seconds, glass cracking, pavements rupturing. Soon a tsunami warning would ring out. People looked to the sky, the only stable thing around them, and it began to snow. Yoko said it looked as though the earthquake had shaken the flakes from the clouds.

Our guide in Sendai, she told us this as we looked across the city from its old castle site, trying to guess where the earthquake damage might have occurred. Half a year is a long time in Tohoku’s biggest city and only a few traces of the event remain. From this vantage point, the only tell-tale sign was a toppled golden statue of a kite that had crash-landed having fallen from a nearby war memorial.

Following the earthquake and tsunami, the power stayed off in Sendai for a few days while the gas was out for nearly a month. Train lines were buckled, roads ruined, and everything close to shore flooded. A handful of ancient buildings were damaged. Innumerable inconveniences and delays were caused, but, overall, it wasn’t a catastrophe.

As we drove around nearby Ishinomaki six months later, it was quickly clear that not everywhere got off so lightly. Only an hour’s drive away, to new-comers the scene near the Minamihama and Kadonowaki neighbourhoods looks like a ramshackle construction site. Yet, for people who’ve been here from the start, it is an enormous miracle.

Reunited with Tetsuya, he showed us around while apologising for being a little tired, blaming our “late night business meeting” by the campfire. I too apologised for being more subdued – our Suntory-fuelled conference had taken it out of me, too.

Regardless, the man from Kyoto was proud to show us around the first house he helped to clear. The place was bare, but clean and structurally sound; the owner had survived and was considering whether or not to move back. We spent a suitably reverent amount of time admiring Tetsuya’s work before he drove us to a little shrine in the middle of a great flat expanse.

As the initial waves tore through Minamihama, they picked up houses whole, their walls stronger than their connection to the ground itself. The tsunami then threw everything into the side a hill half-a-mile from the shore then rebounded. On the way back out to sea, it was met by other, incoming waves and the collisions had a devastating effect on the sunken neighbourhood below. Virtually everything was destroyed or damaged, the ground excoriated as though a Titan had taken a steel brush to the flesh of the earth.

As we approached the shrine to the lost, Katy asked, with tears in her eyes: “What did you feel when you got here?”

“Well how do you feel?” Replied Tetsuya, initially laughing, then bursting into sudden sobs: “It was hell… I thought it would take 100 years to clear it, but here we are after just six months.”

In order for the On The Road team to be efficient, their tasks are divided according to their expertise. For the menial jobs, they work in rotas and shifts. Regardless of their task, they do it without complaint. Being able to meet them was a humbling, almost awkward experience for us. We are travelling around the country, staying in comfortable, even luxurious accommodations; these guys sleep in tents and leave camp at 7am. Soon winter will hit this area hard, but the work won’t go away.

If our efforts count for anything at all, they will surely be to help the final part of Japan’s recovery, the one in which tourists come back to the country. But the heroic volunteers, the selfless thousands from around the world, were – and continue to be – the first part, the most important.

A version of this blog was first published as part of the Travel Volunteer Project in September, 2011.