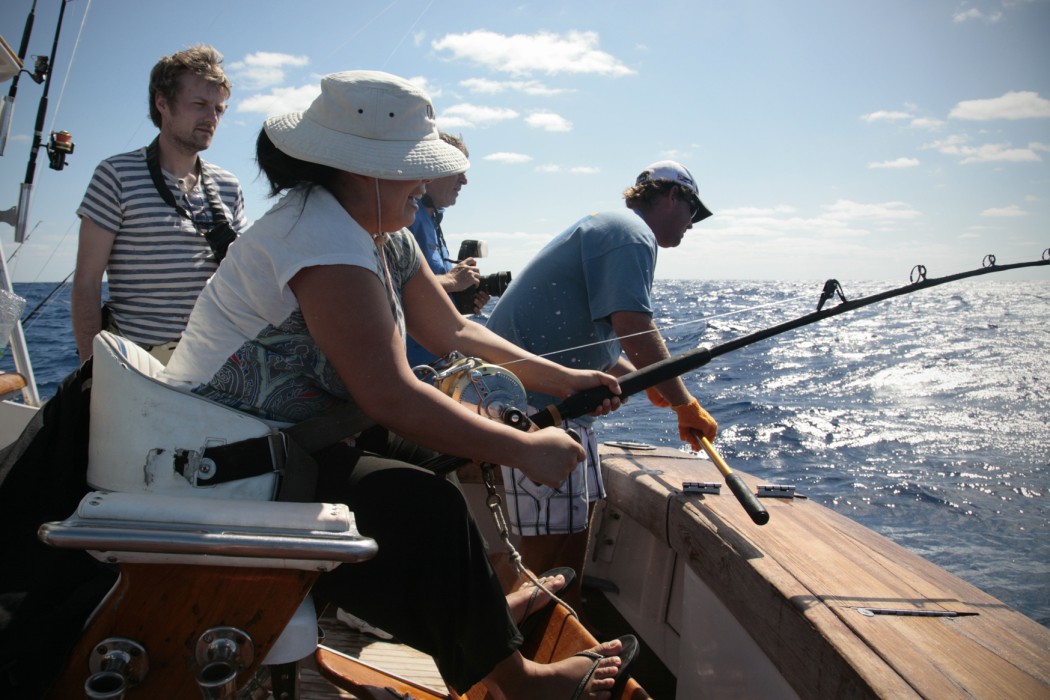 Si Si is unwell, but I’ve got little sympathy for her. We’re on board the Catch 22, bouncing across an unusually tumultuous Gulf of Mexico, south of the Florida Keys, and somehow she fell asleep. As I watch her head loll around, I know she’s made a amateurish mistake. I know what I’m talking about. I’ve spent weeks on boats and never been ill.

Actually that’s not strictly true. I was sick on a boat once – in 1987 when I was four years old and the Michael Fish hurricane battered our ferry around the North Sea. Since then, nothing. I’ve always fancied myself as a man of the sea, a cousin of Neptune, and now I pity silly, sickly Si Si.

The Catch 22 is owned by the legendary Stancyk brothers, Richard and Scott. They’ve been fishing the waters off Islamorada for over 30 years, during which they’ve built encyclopaedic knowledge of the depths. We’re heading out to the deep water in search of broadbill swordfish, but Captain Scott Stancyk first decides to make a quick stop in the hopes of catching something smaller for bait.

They call Islamorada, the port from which we set sail, the “sport fishing capital of the world”, which sounds like marketing hyperbole but which may actually be true. Richard Stancyk, owner of Bud N Mary’s Marina, tells me a friend once came down to celebrate his 50th birthday by catching 50 different types of fish. He’d hoped to do it in a month. They had it sewn up in two and half days.

When we stop for the first time we’re looking to catch some skipjack and black fin tuna – the former is to be used to bait swordfish, but the latter is too tasty to waste. On a trip like this, for amateurs like Si Si, the ship’s mate Hunter Barron does the majority of the leg work, setting the bait, casting the line and eviscerating anything we catch. The punter reels in whatever is on the end of the line and gets the glory, but they’d be lost without the big man. Within minutes of stopping the revived Si Si and I have been handed a couple of wildly twitching rods.

These tuna may be small compared to their yellow and blue fin cousins, but they’re no less keen on dying. The line jerks violently left and right and with the sea as choppy as it is (a “freak of a wind” according to the Stancyks) the skipjack I’ve caught provides a solid test of balance and strength, even for an old seadog like me.

Recovered from her nausea, Si Si displays a good deal less sangfroid. “This is happening! Oh my God! This is happening!” She poses for a mid-reel photo. “I love you Florida Keys!” Si Si is Canadian, and undoubtedly one of the most overtly enthusiastic people I have ever met. She literally squeals with delight when her black fin tuna comes on board to die. “Bless you!” roars Si Si at its dying face.

An hour later, we’ve stopped again when we see a couple of frigate birds peppering the surface of the water, hoping to scoop up an unlucky fish on the run from a murderous school of mahi-mahi below. Si Si winces when Hunter drives a hook through a live pilchard’s empty head and casts it overboard as bait.

Any concerns she had seem to disappear when a mahi-mahi swallows it whole and she’s handed the rod again. But her fish isn’t alone out there – within seconds we’ve gone from sedately looking across the ocean to a mess of demented puppeteers. On reaching the surface the mahi-mahi is a rich gold, but when it gets to the boat it’s a shiny green. As it’s hauled out of the water it goes bone white, then a final royal blue as it lands on the deck. “You’re so beautiful!” screams Si Si. The fish is too dead to reply.

But we’re here to catch swordfish, so when the pandemonium subsides, we’re on the move again. Swordfish may be on Greenpeace’s red list of fish to avoid eating, but that’s chiefly in response to indiscriminate commercial fishing. The stock off the Florida Keys is comparatively healthy, and rod and reel fishing will only ever yield a few fish. Even so, Richard Stancyk concedes that a decade ago, when he pioneered the daytime fishing of swordfish, he’d have guaranteed us at least three. Today he reckons we only have a 70 percent chance of catching one.

Hunter throws over a huge, weighted line with a slice of mahi-mahi inside a false squid. The lure has barely reached bottom when the line quivers. “Fish on!” shouts Scott Stancyk from the captain’s chair. Si Si and I look at each other, then she slaps me on the shoulder: “Go get it Jamie – whooooooooo!”

There’s no standing up when you’ve caught a swordfish; I’m strapped into a chair and the rod is planted into a steel fixture between my legs. From here, I just have to crank the reel incessantly until the fish has been raised.  It’s easier said than done. Richard Stancyk once hooked a 460lb monster that took over eight hours to land. By then the fish had dragged his boat over 20 miles south. When the duel was done he could see the lights of Havana on the horizon.

I set to it, my shoulder quickly burning, sweat flying from my brow. I ease off and maintain a steady pace. As Hunter tells me later, “It’s about finesse and endurance, not strength.” After 20 minutes or so, even though I don’t feel anything change, there’s a murmur of disappointment from the Stancyks. The fish has gone. Hunter theorises that it was never really there at all – perhaps just tangled in the line in pursuit of the bait. I leave the chair, dejected.

And that is the end of the action for a very long time. Though Hunter sets more and more bait, nothing happens. We eat lunch and still nothing. Boredom sets in.

However, Richard Stancyk hasn’t come all this way for nothing. He and Si Si have a discussion – something needs to happen. In apparently non-religious way, she believes in the “transfer of positive energy.” (So do I, for what it’s worth, with batteries and so on.) Richard approves, encouraging her to bless each corner of the boat. She does so, kneeling, mumbling, holding her hands in approximate Buddhist configurations. I drop my shades down and try to stop my lip from curling. “The reel,” shouts Richard, “Si Si, lay your hands on the reel!”

And of course – of course – the bloody rod spasms and everyone cheers and Hunter sets the hook. I stand, flabbergasted, and do the only thing I can: usher Si Si into the chair. She cranks with one hand, then two, sweating and puffing, but never swearing, never giving up.

After half an hour, a 60lb broadbill swordfish, one of the most famous fish in the sea, is on our deck staring with bulbous, shocked eyes. Si Si kneels in its blood: “Namaste! I love  you! Namaste!”

I stand aside, surveying the scene, trying not to vomit with indignation. It was a bum hook, quite literally – somehow the tackle had set in the fish’s tail well enough that it could be hauled all the way to the surface. The poor bastard didn’t even get to taste the bait.

Hours later I’m sitting in the Lazy Days restaurant next to Bud N’ Mary’s Marina, staring at a massive plate of grilled black fin tuna and swordfish. Like many eateries in Islamorada they cook your catch, or Si Si’s in my case. I take a forkful of swordfish steak and sniff it closely. I really want it to be bitter and horrible, like me, but no, it’s infuriatingly delicious.

A version of this piece was published in Fairfax Media’s Traveller in October 2013.