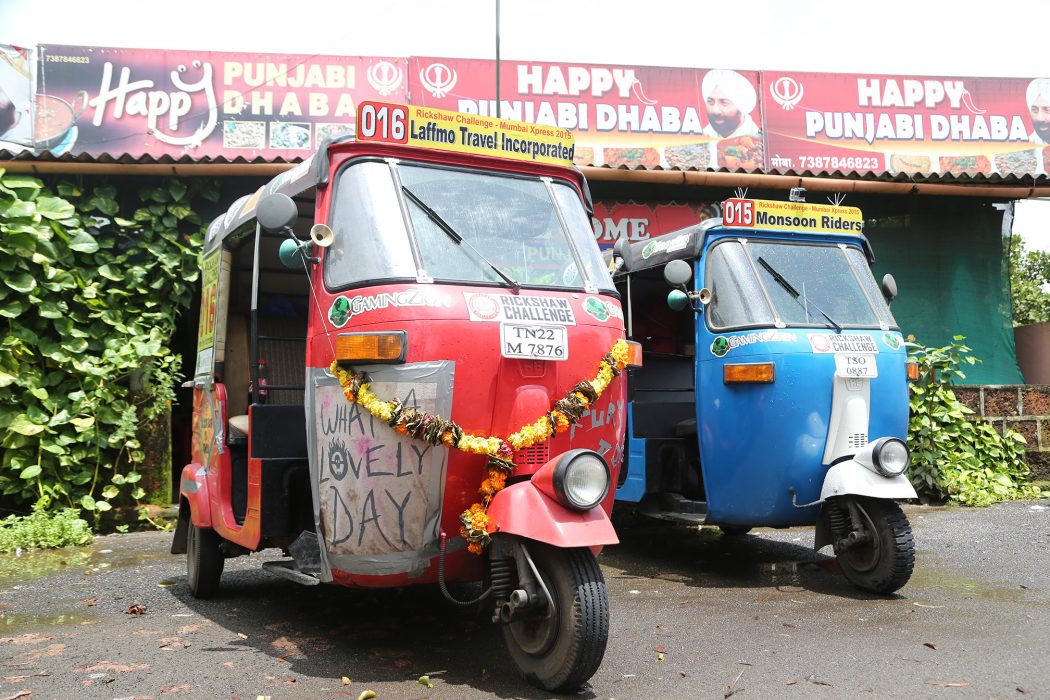 Aravind Bremanandam was under a Lada, sheltering from a sandstorm, when he had an idea. Stuck in the Sahara during the Budapest to Bamako Rally he decided that such misery, or adventure, might transplant well to his native India. “People want stupid?” he said to himself. “I’ll show them stupid…”

A decade later and I’m in India, about to embark on the Mumbai Xpress. This is the longest and most testing of the five or so Rickshaw Challenges that Aravind’s company, the Travel Scientists, now organises every year. The routes and durations vary, but the concept is the same: foreigners come to endure and enjoy haring through India in rickety auto-rickshaws, the ubiquitous three-wheelers which swarm through major cities like so many army ants. This edition starts in Mumbai and ends around 1,300 miles and two weeks later in Chennai. It’s like driving from London to Madrid on a lawnmower, except, of course, it’s absolutely nothing like it.

To add to the challenge, the 40 or so participants, divided across 17 teams, are encouraged to dress up and to customise their auto-rickshaws. As a result, there’s Mario and Luigi, their rickshaw painted eight-bit chic to match their outfits. Impressively, they have the Mario Bros theme tune playing from their newly installed stereo too. Then there’s the all-male Temporarily Misplaced team from New Zealand, who look like they were conceived in the aftermath of a large and potent dose of magic mushrooms. Bare-chested, but wearing top hats and suspenders, the men also sport neon feather-boas, glittery masks and little daisies, neatly daubed on their prominent nipples.

These are Wacky Races, heavy on the wacky, easy on the racing. Instead you “win” by fulfilling challenges: photographing the tuk-tuk in front of an ancient temple; posing for a photo with a cow; posing for a photo with policeman, a few rupees at hand, just in case. Aravind’s advice before we start does seriously include that we take along some baksheesh, but more generally comes across with a kind of pitying amusement. “Please do not ask India for logic,” he says during our briefing. “We only have lanes in this country because the British left behind some spare paint.”

We then have just a few hours of practise in empty school grounds before we are turned loose into the howling bedlam of Mumbai’s traffic. Instantly it’s something of a disaster for me. I stall in the middle of the first junction, a cacophony of protest instantly rising around me; less than two minutes later I shunt into the back of a stationary truck, tattooing scars down the side of my little red rickshaw. The trauma leaves me gasping for breath – then coughing, spluttering and almost vomiting out the gap where a door should be.

Not enough is made of the stench of Indian cities – people don’t warn you properly. No one tells you about all the shit. They don’t tell you that when the wind blows one way you’ll smell life – food, festivals – and when it changes direction you get the reek of the other thing.

He never feels too far away, the man with the scythe, partly because locals drive as though their vehicles are made of something more forgiving than metal, possibly marshmallow. Aravind was right about the lanes, too – the traffic takes on a fluid, organic form, cars becoming blood cells in a giant, often clotted artery.

Perhaps none of that sounds like a great deal of fun, and, yes, it’s a difficult thing to recommend or even defend, at least initially. But so popular has this niche of adventure travel become that between the various rally companies there’s a kind of arms race going on. The Travel Scientists will soon launch the Bullathon, a version in which participants must manage a pair of oxen to pull them in a chariot. This comes after several other rallies through Eastern Europe, and their Central Asia Rally which heads east 4,000 miles from their hub in Budapest all the way to Kyrgyzstan. And the Travel Scientists aren’t the only ones offering these kinds of trips – several of the itineraries have been copied by or from The Adventurists, pioneers of the infamous Mongol Rally. Their most recent trick is to send participants 300 miles down the coast of Tanzania in traditional wooden boats.

In all cases, the rallies are marketed as “minimal assistance”, meaning that while the organisers will book hotels and give you a vehicle in working order, they won’t give you directions or hold your hand as you go. A support vehicle follows behind, but for the most part, when (not if) the rickshaw breaks down you must fix it with the nearest local mechanic. Thankfully even the most rural villages have someone familiar with the vehicles’ rudimentary innards.

For the participants of the 2015 Mumbai Xpress, the reasons for signing up ranged from charity (several teams have their own causes; the Travel Scientists also support projects around the country) to drunkenness. Most had collected plenty of stamps in their passports before embarking on this mechanic masochism, but not 25-year-old Kiwi builder Rhys O’Connor. This isn’t just Rhys’s first time in India, or Asia – it’s his first ever time out of New Zealand. With no travel experience at all he opted to dive in at the deepest of deep ends with concrete boots on. “I know, I’m an idiot,” he chuckles. “I do things always a little bit backwards.”

India wasn’t on his list of places to go, even. “I thought I’d go to Australia first, just over the ditch,” he says. “But Richard [Purvis, another rally participant] came up with this stupid idea and I thought: ‘Yeah, why not?’ We organised it, then all of a sudden it was: ‘Oh shit, we’ve just booked tickets.’”

Now, with partner Victoria, he’s whizzing around rural India and through cities like Pune, which he’d never heard of before, but which has a population roughly the same as his entire homeland. He’s learning a good deal about the world, and himself too – he hated crowds before he got to India, but he’s a bit more relaxed about them now. “Plus it’s been cool to see the countryside and the scenery,” he says, “and all the random stuff that’s around.”

With 1.2 billion-plus inhabitants (everyone in the continents of Europe and North America combined) India has plenty of capacity for random stuff. And for noise. Horn honking means many things around the world: in America it’s a kind of protest, in the Middle East it’s a chastisement, and in the UK, if things get that far, well, get ready for Total War. In India, it simply means “I’m here” but with so many people on the roads, there’s an endless din of existential affirmations.

Once you can look beyond the mania, however, there’s a chance to enjoy the remarkable scenery. No one is sad to leave Mumbai behind and get south, first to the sea-fort town of Alibag, then on to booming Pune, with its craft beer bars and seven universities giving it a more hopeful feel than Mumbai. From there the landscape changes to misty mountains around Mahabaleshwar, an old British hill station, then down through ancient valleys to wind-swept beaches at Ratnagiri. When, after a week, we get to affluent Goa with its fancily painted houses and grand cathedrals, it feels as though we’ve driven into a different country or era.

After a day’s rest there, the Mumbai Xpress turns in-land towards the finish line in Chennai, through more gorgeous countryside, over more mountains which leave the engine squealing like a dying pig, and into more chaotic cities including Bangalore. As the journey continues and we meet more and more locals, each rickshaw gets increasingly garishly decorated, first with ceremonial garlands of fiery flowers, then toys and, at one point, hundreds of packets of crisps. Everywhere we go, people take a lot of photographs.

There’s a deep sense of achievement that comes with raw survival at the end of each day, but when out on the roads, I find it necessary to try and disconnect from the lunatic driving conditions. In the months preceding the rally, I became increasingly fixated with George Miller’s psychedelic death race Mad Max: Fury Road. Screaming lines from it eases my troubled mind. To a distracted cab driver I hope to overtake: “Witness me, blood bag!” As I squeeze between two thundering lorries: “Riding to Valhalla!” I also bought a pair of goggles not dissimilar those worn by Nicholas Hoult’s Nux, but find them of no practical use on the rally, sweat or tears making them fog up within seconds.

But then there are moments when blindness is perhaps preferable. Those times when you’re trying to overtake a truck on a bend and you can feel the engine failing and then a car decides to overtake you and so does a motorbike and you’re riding four abreast like it’s the Derby, and then you notice and even bigger truck coming in the opposite direction… At those moments, that’s when you can expect a herd of smug, sacred cows to shamble out into the road. In the evenings, over beers we rally members conspire to order revenge steaks, to dine on the flesh of our defeated enemy – at least when we’re back home and it’s not culturally inappropriate to do so.

Complaints, though frequent, are fleeting. People signed up knowing they would be tested, mentally, physically, mechanically. The toil is the appeal. As it goes on you master the rickshaw, cease to be so shocked all the time and quickly learn to have a lot of fun. Personally, the rally days taught me a new kind of patience, a realisation that with a bit of time and determination you can overcome almost anything. You need only smile, wave often and keep a small bribe in your pocket, just in case.

A version of this piece was published in the Guardian in January 2016.