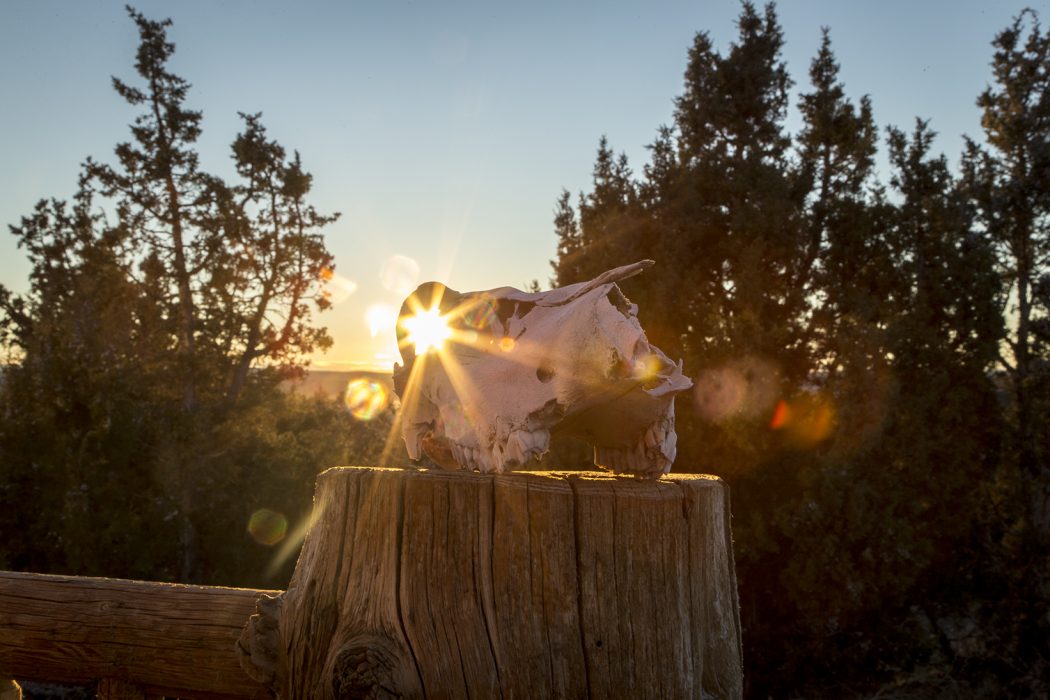 Once Upon a Time in the West

When the gun goes off, its belligerent noise slams into a vermillion cliff-face, then echoes back over our heads and out into the infinite expanse of central Wyoming. There’s a gentle tinkle as the bullet casing hits the ground. A serpentine smoke trail rises skywards from the barrel of the pistol. My brother, Jack, has just hit a man in the torso. He spins and rights himself, then my little brother takes aim, and quickly shoots him again.

It’s a little unnerving to see how good a shot Jack is, here with the pistol shooting these little metal figurines, and later with a shotgun, when the targets are changed to innocent clay pigeons. This is the longest I’ve spent with my brother in about 20 years – what if he’s insane now?

We are at the Red Reflet Ranch and the shooting is part of a series of guest experiences which essentially let us play as cowboys. Over three days we’ll ride horses and eat enormous steaks; visit a saloon and scare deer on our quadbikes. A sense of competition is never far away. Each night the vastness of the sky will allow the sun to linger long enough to turn the red rocks of this prehistoric place every warm shade on the palette.

Red Reflet is an hour or so outside of the Wind River Indian Reservation, the setting for Taylor Sheridan’s 2017 thriller Wind River. Our drive here from Utah took us through some of that land, and followed the river itself for about 50 miles, including through a spectacular canyon of the same name. On the other side lay the strange, touristy hot-spring town of Thermopolis, and slightly further upstream, the Wind River changed into the Bighorn, at a confluence romantically named The Wedding of the Waters.

The film sees FBI agent Jane Banner (Elizabeth Olsen) deployed to the Reservation in a blizzard to investigate the death of a Native American girl. The agent is woefully under prepared for the harshness of the climate. Though we have arrived in shoulder season, before deep winter sets in, I sympathise – with all my layers on, I can endure the chill while walking around, but when we get out on our quad-bikes (available to all guests during their time at the ranch) the cold wind feels like icy fingers snatching at my face.

The day we go horse-riding the heat from my mount at least helps keep us warm, meaning I can try and take nervous photographs as we plod along crimson cliff-tops. It might only be a sedate convoy, led by experienced ranch hands, but with oblivion just a few feet away, I find myself hoping the horse’s sense of self-preservation is as strong as my own.

Wyoming is one of those famously empty US states, where distances and areas are measured in terms so huge as to not make much sense to Europeans like my brother and I – this is a state that has more land than the whole of the United Kingdom, but a smaller population than the city of Bristol.

With so few people, and so much room to roam, wildlife does well round here. Each morning we see mule deer, while on the edge of the ranch’s land, there’s a cautious herd of bizarre-looking pronghorn, the world’s second fastest land animal. That makes them significantly faster than the unseen population mountain lion also making their home on the ranch. With cheetah several thousand miles away, the pronghorn, like the mule deer, mostly have to be concerned with hunters’ bullets, which start flying for a few heavily regulated weeks every autumn.

At least you’d think they’d be concerned – instead, the ranch land reserved for doomed cattle proves to be consistently irresistible for the deer. The mighty elk are far smarter quarry. My brother and I haven’t come here to hunt; the permits to shoot elk are limited and expensive, and the thought of making a horse-sized creature die is, to me anyway, quite terrifying.

Bob Kaplan does not feel the same way. He and wife Laurence have owned Red Reflet since 2001, and he’s been periodically dealing death to elk for about the same amount of time. He is a man of few words; he is not a man of few mounted elk heads. When he talks about the stalking and the killing, it’s clearly something transcendent for him, important in a way my brother and I can’t really pretend to understand. “I don’t think much about the deer, but I remember every single [male] elk I’ve shot,” he says one day over dinner.

These days Bob is a grizzled outdoor man – he knows how to butcher the animals he shoots, how the meat should be cooked. He can talk for hours about the bovine reproductive cycle. He drives a big truck, can ride a horse, knows how to wrap up against that ferocious cold. But it was not always so.

He and Laurence did not grow up as ranch hands, nor do they come from a dynasty of cowboys. Their running joke is that when they arrived “they didn’t know which end of the cow to feed,” but now they live 70 miles from the nearest strip-mall, custodians of the middle of nowhere.

Both had built successful businesses designing and selling baby products, sold their companies, and, after a five-year search, acquired 30,000 sensational acres of raw Wyoming wilderness as “a retirement project.” Not unreasonably, their family “thought we were completely crazy” says Laurence, despite the original plan being for Red Reflet to be a dream retreat for their relatives. Soon the project began to evolve.

“Every time we saw the family, we were so passionate about the ranch that we couldn’t stop talking about it,” says Laurence, whose warmth and loquaciousness are key to the ranch’s hospitality. “I said to Bob ‘I think we’re starting to bore the family.’ He looked at me and said ‘Why don’t we take some guests in? And then we can bore them.’”

These days, the ranch can host up to 30 guests at a time, all through the year – horse-riding and trekking in the summer; snow-mobiling and skiing in the winter. Every other Thanksgiving, their extended family still gathers here from across America.

The Kaplans were incredibly successful in their former lives and like to eat well – this is very good news for we guests. They go to extraordinary lengths to ensure fine food arrives from across the USA, keep an excellent cellar, and on the occasions that they get something from their land, invite their guests to join them to try it. When we share some elk, shot earlier in the week by Bob, it is perhaps the best meat I have ever tried anywhere in America.

The ranch is a few miles outside the small town of Ten Sleep, WY, population 260. Its main thoroughfare is an eclectic mix of the sort of Americana that I can never be too sure is authentic: the Ten Sleep Emporium (“More odds than ends”); Dirty Sally’s General Store; a gun shop alarmingly sandwiched between The Bighorn Bar and The Ten Sleep Saloon.

On a visit to town, Jack and I stop in at the last of these to have a beer at its ancient bar. On the wall, where a British landlord may hang a portrait of the Queen, there’s a headshot of John Wayne, locked in an eternal staring contest with a mounted elk head across the room. Next to the spirits, eclectic bumper stickers declare “If you’re lucky enough to live in Wyoming, you’re lucky enough”, alongside others saying unkind things about Barack Obama.

Still, the barmaid could hardly be more welcoming, even when she realises that, despite our convincing plaid shirts and powerful beards, Jack and I are outsiders. “Where you boys staying anyway?” She asks. We tell her. “Oh I haven’t made it up there yet – I’ve heard it’s kind of fancy.” She says this as though the place hasn’t been there for 17 years.

And fancy is not a descriptor I would use for Red Reflet – well made, stylish, constructed with a love of the land and people. It’s easy to see why some Ten Sleep locals might look at the ranch like Romanian villagers looking at Dracula’s castle, unsure what happens there, awed by their wealth and otherworldliness. Bob is originally from Chicago and Laurence grew up in Australia and North Africa; like us, on some level they are outsiders, even if they’re providing employment and a chance for city types to dip into a fantasy outdoor life.

In the opening scene of Wind River there’s an elegy, written by one dead girl and narrated by another. It’s heavy with melancholy, but speaks to the enormity of this environment, of its implacability and awesomeness. I found it almost unbearably sad before I visited Red Reflet, but now, when I read it, it could be about the perfect world the Kaplans have made for themselves, and for those visiting this remarkable land.

“There’s a meadow, in my perfect world, where wind dances the branches of a tree, casting leopard spots of light across the face of a pond. The tree stands tall, and grand, and alone, shading the world beneath it… It’s here in the cradle of all I hold dear that I guard every memory of you. And when I find myself frozen in the mud of the real, far from your loving eyes, I will return to this place, close mine, and take solace in the simple perfection of knowing you.”

A version of this piece was published in Virgin Atlantic’s in-flight magazine, Vera, in January 2018.