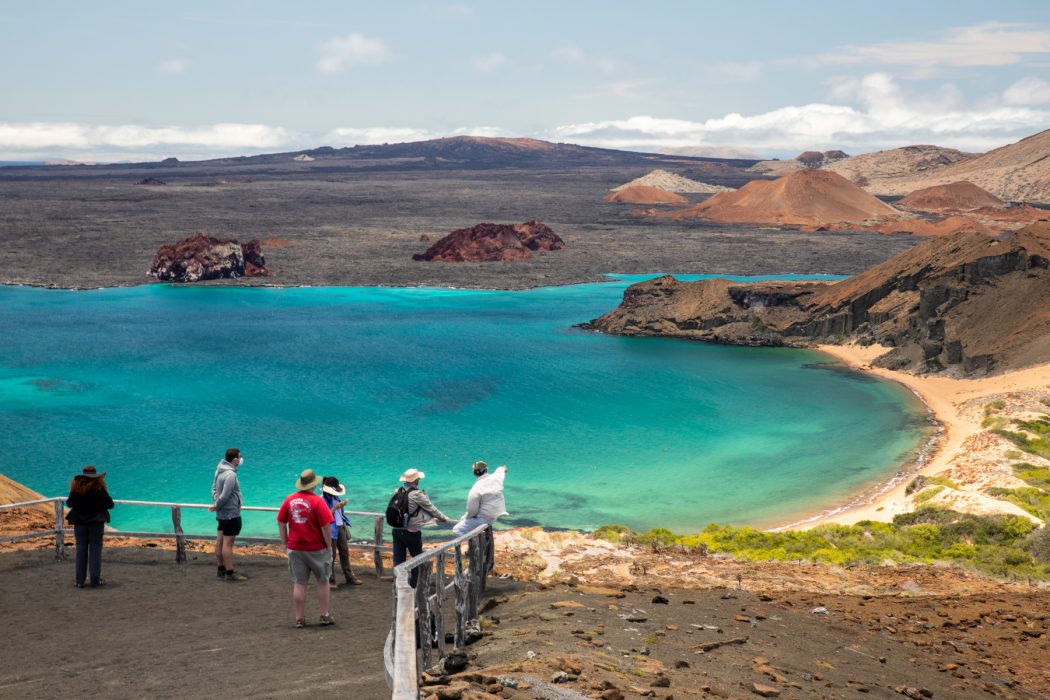 It feels like a place summoned from the scorched pages of a Cormac McCarthy novel. Out on Bartolomé all humidity is gone, all moisture burnt away. The very air feels as though it has been drained like the victim of a vampire. Here, in the rain shadow of Santa Cruz, the volcanic rock remains exposed and furious and bereft of life, seared by sunshine above and magma below.

Improbably, we are here for a hike. It’s only to 80m or so above sea level, but in these conditions, wearing a mask, that represents thirsty, uncomfortable work.

The route to the top of Bartolomé follows a sun-blasted boardwalk, under which especially nervous lava lizards scurry whenever our monstrous shadows loom overhead. Quite what they able to eat here is unclear. Flies are a possible answer, it’s hard to see how even they’d survive in this punishing environment. The only flora to take hold are endemic grey matplants, sorry-looking shrubs that could be made entirely of ash, or perhaps have been transported here from a garden in Pompeii. The only other signs of life are the bleached carapace of a crab and a single, confused finch who looks like she may well ask for a refund on this particular holiday.

Our guide Mario has done this hike perhaps 100 times, though of course not much at all in the last six months. He has a good sense of humour, Mario, though it’s in keeping with his age, by which I mean it’s a bit old-fashioned. I like him straight away, probably enough to ignore the slight working-men’s-club tone of some of his gags. For example, as we take a much-needed break close to the summit, I ask how the year has been for him.

“After five months, I was going crazy,” he said, panting through his maddening mask. “Thank you all for coming here. Thanks to God. If it wasn’t for you, I wouldn’t he here.” He pauses again so we can admire the view, a view so grand it tempted Peter Weir to shoot a crucial scene in Master and Commander from this very spot. “I would be at home instead, cleaning and fixing things. My wife standing with the whip… I’m sorry. I’m trying to make a joke.”

We press on to the summit. And the sweating, the face-scratching and the intense thirst, they’re of course worth the price of admission for this famous view. Mario insists it’s a bit unusual though – aside from volcanos, the only thing punctuating the surface of the cobalt surface below is the boat that brought us here. “You won’t see it empty again like this for another 100 years,” he says in a way that invites no dispute.

Half an hour and some snacks later, we’re getting ready to roll off our Zodiac and into the water. After the desiccated slopes of Bartolomé, every inch of my skin is ready for it. In the sea we’ll swim with rays and sharks, turtles and eels, while from the shore we’ll see two Galapagos penguins who can’t quite be tempted to come and play in the water, and one sea lion who absolutely can. On the sail home, we’ll see manta rays breaching in the low afternoon sun, only to be immediately outdone by a pod of bottlenose dolphin.

Before all that, though, Mario offers us a bottle to keep our visors from fogging up. I ask what’s inside. “Well some people prefer spit and some people prefer soap, so this is half soap and half spit from all the crew.” I snigger, another couple do not. Mario shrugs.

“You’ve got to keep trying,” I offer.

A group of Ecuadoreans arrive late to the dingy. One asks in Spanish what’s in the bottle and Mario goes through the same routine in their language. His countrymen laugh manically and he looks at me one more. I give him the thumbs up, he nods, then I roll into the water.