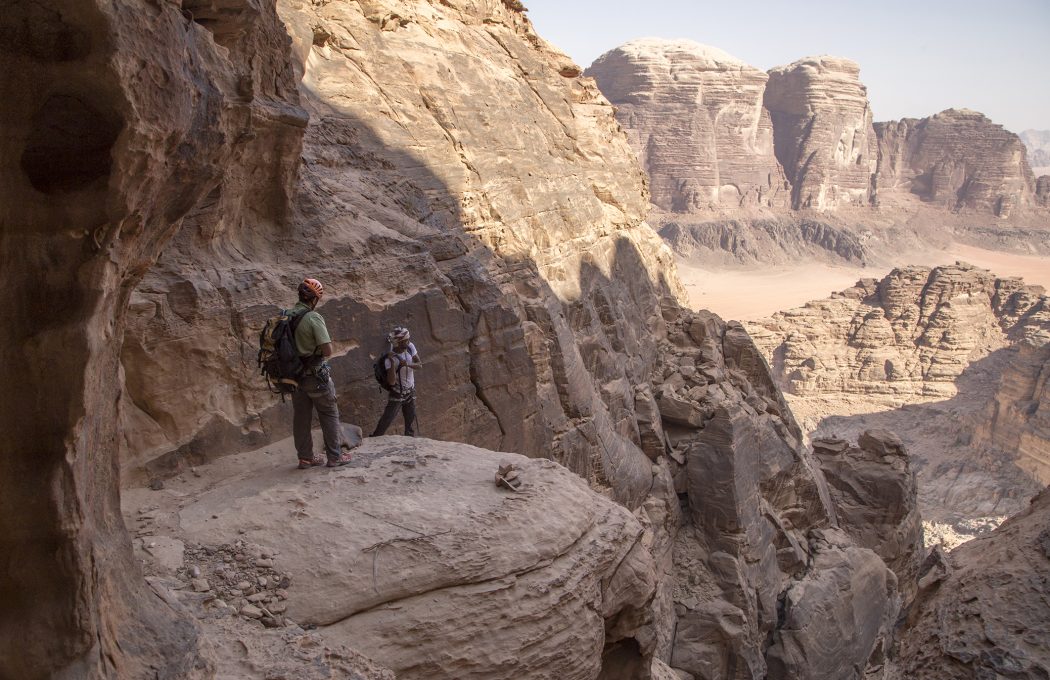 They say the fat, arthritic olive trees in northern Jordan’s Irbit region were planted by the Romans. That would likely make them older than local lad J. Christ, a theory which hasn’t been scientifically tested, but one that’s quite believable in this biblical land of dusty hills, itinerant goats, and near endless sunshine.

Light, divine and otherwise, shines across the Hashemite Kingdom, but I’m initially here for something much darker. I am going caving, the first in a series of adventures below, on and above ground in Jordan. All of them are new to me, but what I lack in experience, I hope to somehow make up for in bloody-minded determination.

“Sorry if I’m squeezing your balls,” says Hakim Tamini-Mariño when he tightens my harness and I take a sharp breath. The discomfort is just enough to take my mind off what I’m doing: trusting the know-how of men I only met a few hours earlier while they hang me over an abyss in the middle of nowhere.

Jordan’s limestone rock makes for excellent caving, but locating entrances isn’t easy. This is partly because some locals are suspicious of cavers’ motives. “They think we’re coming to steal gold,” says Hakim, who works in the government’s newly formed adventure tourism department.

With gilded expectations, if the farmers could see the bottom, they might be disappointed. The dark boulders, the fissures and eerie stalactites… They’re all given a warm glow by the sulphur-flame torch Hakim has on the front of his helmet; the cave may appear golden but there’s certainly no gold.

Meanwhile, the air feels simultaneously too thick and too thin – like eating American diner food, I feel full but malnourished. Through deep, laboured breaths, Hakim reminds me of how few people have ever laid eyes on this strange chamber. And being here does feel like the privilege of a genuine explorer, but in caving, what goes down, must come up, and so begins the 30m journey back to the light.

To help those pulling me up on the surface, I try to scramble up the cave walls. With so little oxygen in the atmosphere, I’m immediately breathless and unable to gain any footholds, unsure, really, of what I’m doing. But I know for sure that something bad has happened when a large rock gives way under my foot and tumbles into the black, a loud thud echoing below while I ricochet from one wall to another.

I don’t remember being born, but now I’ve got an idea of what it was like. Maximum stress, hauled from darkness to light, warm to cool, strangers staring at you, relieved you’re breathing. As it is for an innocent, so it is for a returning amateur caver.

Adventure was once defined for me by a man who’d climbed Everest as “outcome uncertain” which seems reasonable enough, but isn’t particularly reassuring when my life is quite literally on the line – or a line, at least. Much of Jordan’s adventure tourism involves ropes and complicated bindings not covered when I got my knot-tying badge in the Cubs 25 years ago. In other words: I must put a lot of trust in my guides, especially the following morning when we head out in brilliant sunshine to go canyoning.

A combination of scrambling, hiking, swimming, and rappelling, the aim of canyoning is to get from a high point upstream in a gorge – a wadi in Arabic – to an opening on the other side. Jordan has dozens of wadis suited to the task, offering everything from brief excursions to multi-day adventures. I am to experience Wadi Balou’, which seems appropriate for someone who only just has the bare necessities to survive.

Led by Abdullah Al Saheb, our small party sets off downstream, barrelling through bushes and clambering over rocks. A tributary to the humongous Wadi Moujeb, this picturesque valley’s precious water supply is coveted by plants and animals alike. Luscious pink oleanders are one of several flowers lining the route; in the water, frogs and nymphs glide under the sun-dappled surface. Framing it all, the multi-coloured walls of the gorge look as though they were created by a master sculptor in the midst of an acid binge.

Before long, we reach our first rappel, down an unnamed waterfall into a cold pool. My guide offers a little instruction, then sends me over the edge with a confidence I do not share.

While the knots look complicated and the science behind tensile strengths and friction is above my lowly comprehension, I can’t help noticing how simple the release system is. I’m essentially feeding my life through a buckle, releasing a little more each time with my right hand, allowing gravity to do what gravity does. I’m repeatedly warned to keep away from the buckle itself lest it “bite” me. If I let go, I’ll be taking the express way down.

Perhaps it’s being above water, but when I get to the edge, knowing that my grip on the rope is keeping me alive doesn’t feel too intimidating. Plus, there are so many distractions: as I make my way down the mossy green cliff-face, I’m amazed to see a cream-coloured crab scuttle past my boot. How did he get here, this bold little crustacean, when the nearest sea has been Dead for a very long time?

Hours later, we finish with our longest rappel of four, one that requires hanging in the direct line of the water. When I drop into the pool, I let out a laugh that echoes up the wadi walls.

Having collected the line, and swam to shore, Abdullah shakes water from his ears, then offers me a satisfying high-five. “Good job, man” he says, without breaking stride. I want to try and sum up what an amazing, wild ride the day has been, but instead of chatting, the Jordanian continues past me, finds a flat rock, divines the direction of Mecca from the sun, and begins to pray.

Beyond the Comfort Zone

Remember the kid at school who was always climbing trees? The jittery, energetic one who could scale a rope with the ease of an adult chimpanzee? Well that wasn’t me. I was the other sort – the fat kid who purposely left his gym kit at home, knowingly inviting the wrath of the teacher rather than participate. That squalid attitude wasn’t much use as a teenager, and 20 years later, I’m finding it pretty abject preparation for rock climbing.

Physically I’m better equipped to cope with the sport’s rigours, but that’s scant substitute for genuine ability. We’ve come to a rock face a few kilometres from the Dead Sea. A couple of days earlier, near Ajloun Castle in the north, I’d tried climbing for the first time, not getting very far before giving up to watch adept practitioners scale a sheer cliff like geckos.

Now, with around 15 minutes of experience under my belt, I’m stuck underneath a small, jagged overhang, unable to go up or down, the sun beating on my helmet like a terrible neighbour against the wall.

My body is sending feedback from every extremity. All are highly dissatisfied. Sweat is carrying sun cream into my eyes. I’m breathing so heavily that dust blows out of a crevasse and sticks to my desperate face. Flies are plaguing my nose and ears. Lactic acid is gnawing my calf muscles. My right arm begins to tremble with fatigue. All I want is my blind left hand to find a hold. Somewhere far below, quivering behind a boulder, is my comfort zone.

I need to find a way to get my left foot to that little space in front of my face, a jigsaw puzzle with many missing pieces. Despite what feels like elemental discomfort, rock climbing is also partly an exercise in problem solving – lateral and vertical thinking.

High above me, providing what might be called inspiration, Ahmad Banihani is silhouetted against a bleached sky: “Come on man, you’re wearing Scottish shorts – you can’t give up!” I look down at the navy-blue tartan, darker now than when I started. I hope that’s sweat. Below, it’s definitely blood that’s trickling from a graze on my pink legs. Shorts were a bad idea. This was all a bad idea.

From above: “This isn’t a negotiation!”

Is hate a strong enough motivator to get me up this face? I’m not sure, but something must change, so I jam my elbow against the rock, feel the sharp stones sink into my skin, and haul myself up. And up and up.

When I get to the rest station, panting and bloody, I don’t feel pride, or exhilaration – only relief. But sometimes, that’s enough.

Thankfully there’s some reasoning behind this masochism. All week I’d be assured by each of my guides that the final day would be the hardest. Ahmad has brought me to the mighty Wadi Rum, the fantastical pink-and-orange landscape used as a backdrop in films from Laurence of Arabia to Rogue One. Most visitors look at it all from afar, or from atop a camel. Of course – of course – I am to do something more challenging.

Now led by Abdullah Dakhilallah, a man who seems to hydrate by continually smoking cigarettes even thinner than he is, I am to scale Jebel Rum, the second highest peak in Jordan at 1,775m. This will not be a casual, bucolic amble – we will be mountaineering. This is again a first for me, but as I soon realise, the week’s preceding experiences will prove useful over the nine hours we need to traverse the mountain.

Setting out at 7am, we begin with a steady trek, sweat soon leaping from my brow onto the pink sand below. Next comes scrambling, using hands and feet to scurry over boulders and rock-faces that I’d have turned back from just a few days earlier. The sandstone offers incredible grip, making it possible to ascend at unnaturally vertical angles. The strange erosions of the rock provide so many perfect hand-holds that I find myself wondering if they are manmade. After a couple of hours, the golden light of dawn pours across the mountaintops like magma. Breathless and again bleeding though I may be, this demented experience is absolutely exhilarating.

On and on we climb, never seeing another soul. When we hit the summit there are 360-degree views across a Martian landscape, a red sand sea making islands of other, smaller mountains nearby. From somewhere at the bottom, the sound of lowing cattle is carried from Wadi Rum Village on the breeze.

We climbed for three and a half hours, ascending over 1,000m to get here, so we take a long break before contemplating how to descend. Abdullah explains it will require a lot more scrambling and hiking; tumbling and sliding. There will also be six separate abseils, the last of which comes half an hour from the end, 45m down layer-caked rock of ochre, vermillion and violet.

Half way down this final psychedelic drop, I take a moment to hang there and take in the great wadi behind me, a vast cathedral of fiery stone. A profound silence hangs with me, and is then blown away by a call to prayer from an unseen mosque, booming off the canyon walls, echoing like the voice of God himself.

A version of this piece was published in National Geographic Traveller in December 2017.