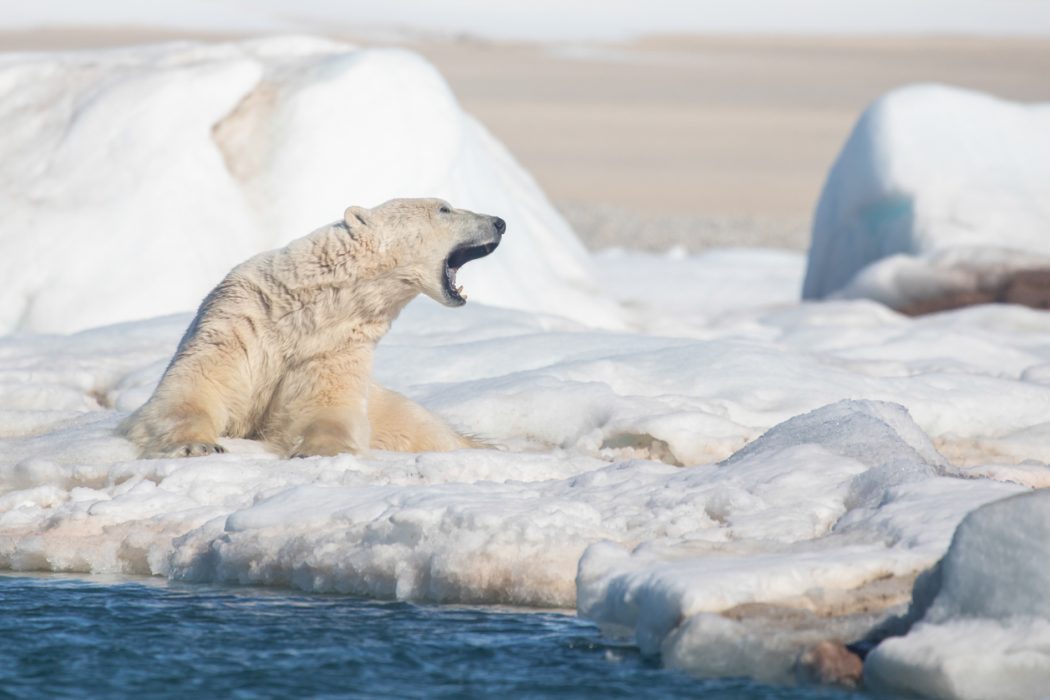 “It’s really crazy work,” says Steve Torgersen. He’s talking about getting fresh water to his restaurant Gruvelageret, on the edge of Longyearbyen, Svalbard, but he could easily be talking generally about the challenges of supplying good food this far north.

To look at Longyearbyen on a map (or in person), there’s no reason to expect its restaurants would be serving anything more than hearty staples to keep a town of fewer than 2,500 people fuelled. This is 78 degrees north, just a little over 1,000km from the North Pole – almost nothing edible grows and Svalbard’s wider infrastructure is negligible. Yet instead of canned goods and frozen pizzas, around town you can find elaborate menus prepared with French techniques and produce sourced from local trappers. Here in Gruvelageret, for example, an average set menu may include a potent smoked Svalbard reindeer heart and white bean soup followed delicious reindeer tacos served with a cloudberry preserve.

Along with partner Kristin, Steve is at the forefront of the movement driving culinary standards on Svalbard higher every year. As well as Gruvelageret, they own the recently opened Stationen in the heart of town, and next to that, arguably Svalbard’s most popular bar, the Karlsberger Pub.

Just as importantly, the Berlevåg native has lived here on and off for the last 25 years (Kristin was raised here) and witnessed the population’s changing demographics, economy, and tastes. They’ve also seen the climate shift. “You want fish? You have to catch it,” says Steve over a coffee. “Same for the grouse. There’s no commercial operations here. But the fish are easier now – it used to be one year in five or six the cod would come into Isfjord. It was too cold. But for the last five years in a row, we have had many of them.”

In a nod to Svalbard’s past, Gruvelageret is designed to look like an old coal miner’s hut – the interior is a carefully considered array of dark wood, used mining equipment, and Edison bulbs. When the nightless summer is replaced by the four-month darkness of winter, the restaurant bathes in candlelight.

It’s cosy inside, but much of Longyearbyen looks like the Arctic outpost it is – a great, treeless valley carries a brown stream of glacier water through the middle of the town and out into the cold expanse of Isfjord. Climate change is happening quickly here, but not with such speed that the land is fertile enough to grow anything. The permafrost shifts and mutates every year, but the topsoil is useless for agriculture – it can barely sustain enough moss and shrubs to keep Svalbard’s indigenous reindeer alive.

Given the hostile environment, the majority of Longyearbyen’s produce has to be imported by boat or plane. Nonetheless, restauranteurs like Steve make the most of a brief and frantic hunting, fishing, and foraging season in August and September to supplement what they get from the trappers. The foraging is strictly limited to a small brown mushroom (not even cloudberries grow this far north) and each licensed hunter may only take one reindeer each.

“It’s not possible to have a kitchen that’s based only on food from Svalbard – we don’t have enough,” says Steve, who would of course source everything locally if he could. Instead, he tries to reduce the distance his ingredients travel as much as possible. “We keep it Scandinavian, including the north of Norway, Sweden, and Finland. From here we have reindeer, cod, arctic char, grouse, goose, sometimes polar bear but it’s been many years…”

Steve is only half joking when he says this. No one actively hunts polar bears, but that doesn’t mean they aren’t occasionally killed. During those unhappy times, when a bear is attacking humans or must be humanely destroyed, the killing is treated almost the same as though a human had been shot. All of which is to say: it’s a serious business, but periodically over the years bears have been shot and, historically, some have been eaten, too.

If there’s an upside, it’s that things weren’t wasted. That was true for the meat and it’s true for the hides. Almost every high-end restaurant in Longyearbyen has a bear on the wall, its perfect albino fur looking as simultaneously inviting and deadly as ever.

Originally founded by Dutch whalers, the industrial focus of the islands has shifted repeatedly over the centuries. Whaling and sealing were eventually replaced by mining, and as that has almost completely ceased over the last couple of decades, tourism has come to fore. Since the turn of the century the annual number of visitors has doubled to around 130,000.

“It used to be mostly single people living here – they were in small accommodation and not cooking at home so they started to live more continentally”, says Stein-Ove Johannessen, manager of the Svalbard and Vault hotels. “Plus, the food prices in our shops are really high, so it can actually be cheaper to go out, especially if you’re a single person. Also, the taxes are low here so the restaurants can get high quality ingredients, and now there is a demand for very good food. That’s why we wanted to start our food network – the tourists who are coming don’t expect this, and we want to tell them.”

The network aims to shine a light on the industry by hosting food festivals, while aspiring to push the government to allow locals to make more of Svalbard’s limited natural resources. “What we’d really like is to have more people coming here primarily for food and drink,” says Stein-Ove, “but also we want to see more local producers and businesses starting.”

This isn’t limited to Longyearbyen, either. Over an hour away by speedboat, Isfjord Radio Adventure Hotel is the outpost’s outpost, a former telecommunications hub, now a remote hotel and restaurant visited by tourists seeking a little extra adventure and locals who have grown claustrophobic in Longyearbyen.

It welcomes guests from February to September every year, but one arriving in early June this year was a lot hungrier than most. “He ate mostly from the food waste, and some chocolate, plus some figs,” says head chef Simon Liestøl Idsø. “But the drinks storage was completely destroyed – you can imagine how it looked after a big fucking polar bear has been in there for two-and-a-half hours.” It was a funny headline in the wider world, but the polar bear raid represented real damage to a hotel so cut off that its power comes from a diesel generator, its water from snowmelt.

Despite the remoteness and ursine invaders, Simon is also doing outstanding work, overcoming endless challenges of supply and preservation to present beautiful lunches and dinners to guests who’ve made the wild trip to get here. Owing to how difficult it is to source ingredients, his menu is adjusted almost every day. “I wasn’t quite aware of what I’d gotten into at the beginning,” he says with a light chuckle. “There’s a lot going on that you can’t see and there’s only a small kitchen and small staff. We have just two chefs and when we’re not in the kitchen we’re driving tractors or helping to fill the water. Cooking is only half the job.”

As with Gruvelageret, reindeer appears for most of the year, as does fish and occasionally seal, but supply lines are so thin that the relationship with trapper Tommy Sandal is even closer than for those back in Longyearbyen.

Twice a year, the stores receive a large delivery from the mainland, packing the fridges and pantries to the roof; meanwhile fresh fruit and veg arrive in small quantities by boat or snowmobile every fortnight. While flexible enough to include chance ingredients like seal or ptarmigan, much of the menu is dictated months in advance. “We preserve everything we can – we don’t use it straight away,” explains Simon. “We make powders and chips. We pickle vegetables. We ferment things. We dry and cure. We make purees and soups. In a week, it’s all changed to something else.”

Simon learned techniques for drying meats from his grandparents, and thanks to a recent grant will soon start growing a limited amount of herbs on-site, too. The idea is to be as self-sufficient as possible while accepting the considerable limitations imposed by mother nature.

Back in Longyearbyen, Ben Vidmar is looking to ecologically rebel against his surroundings too, thanks to his greenhouse dome. Located in the heart of the valley behind the town, for the last two years the American – who also trained as a chef – has grown herbs, salad items, and some root vegetables between May and September. Nearby in his laboratory he’s trying to work out a way not just to provide local restaurants with microgreens and other produce, but for a more holistic approach to resources on Svalbard. “We want to grow fresh food and deliver it, but we also want to process organic waste that’s just being thrown away,” he says. “We need to figure it out – it’s very new, revolutionary.”

For now, most, if not all, of the high-end restaurants in town are buying his greens to serve with their dishes. This includes Huset, the oldest continually running restaurant on Svalbard. Almost everyone involved in haute cuisine up here has worked there at one time, including Steve Torgersen and Simon Liestøl Idsø. Today, this huge, solid-looking building continues to set the industry standard for the archipelago, leading the way with a divine eight-course Nordic Tasting Menu with wines paired from its mighty 20,000-bottle cellar.

The menu here also adjusts constantly, maximising the freshness of ingredients arriving into Longyearbyen from other parts of the archipelago and the wider world. During a two-hour theatrical set banquet, there are delicate cuts of reindeer served on an antler, locally caught cod served with burnt onions and smoked almonds, and a pungent blue cheese profiterole arriving on a piece of coal from an old mine. It’s as inventive as it is tasty.

In another far-flung part of the old Norse empire, the Faroe Islands’ Koks Restaurant hit international headlines last year when it earned the nation’s first Michelin star. The surprise wasn’t so much in response to the food, but rather that the hallowed guide’s gaze was roving quite so widely.It didn’t go unnoticed by Stein-Ove Johannessen, who used to work in a two-starred restaurant in London – if a Faroese restaurant can win a star, why not a Svalbardian one? “Ja, I think it could be possible,” he said. “I really think that should be our goal.”

A version of this piece was published in Norwegian’s N Magazine in September 2018.