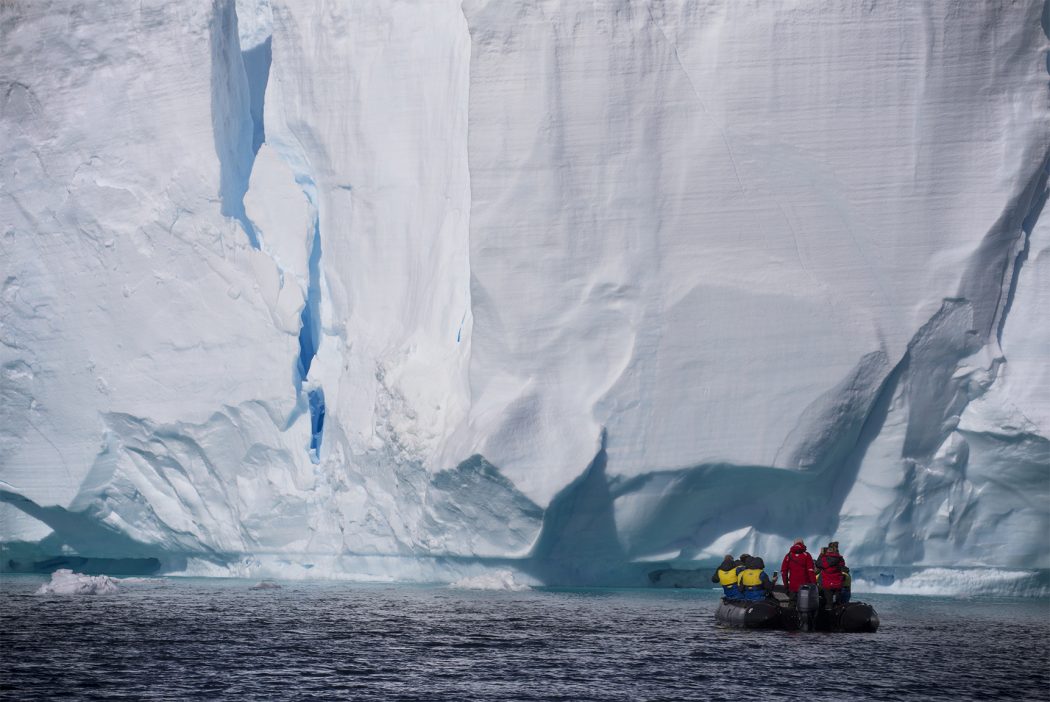 The coldness you feel during an Antarctic polar plunge is elemental. It is not something you can brush off or laugh about. Make all the plans for witticisms you like, the moment you hit that sub-zero water, a panicked mammal part of your being takes over and gets you the hell out of there. The shock and awe from that frigid leap then transforms into something else: a strangely warm feeling as millions of nerve endings scream in fiery confusion.

That is one type of cold in Antarctica, but there are many more. Cruises to the Seventh Continent happen only during the austral summer, but even then the temperatures will generally hover around freezing. And while climate change is warming the planet’s oceans at a catastrophic rate, for now the waters around Antarctica remain very far from tropical.

Last year I repeatedly found that out first hand, not just during the traditional polar plunge, but while snorkelling. One of several activities offered aboard Aurora Expeditions’ Polar Pioneer, the snorkelling was organised by third-party contractors Waterproof Expeditions. They provided a double-daily chance to get in the water and float around in a dry-suit which kept we snorkelers alive, if not exactly comfortable.

And, for me, it represented the ultimate opportunity for a digital detox. Not only were we denied access to the internet, we were placed in the heart of some of the world’s most spectacular natural environments, surrounded by some of its boldest wildlife, all while breathing its least polluted air. The putrescence of the news cycle could hardly have been farther away – the ceaseless updates on our burning world seem utterly irrelevant down there and, given all that’s happened in the last couple of years, the idea that I could drop it all for 12 days with Aurora’s Weddell Sea Explorer voyage was irresistible.

Still, like any addict, I found it hard going cold turkey. I’d reflexively reach for my useless phone whenever I thought something absolutely, positively had to be googled. Despite it being my third trip to Antarctica, and despite me actively looking to disconnect, it took time to settle into the rhythm of the ship: eat, explore, have fundamental understanding of universe altered, take photos, repeat, head to the bar to digest the day with fellow passengers.

The Polar Pioneer may or may not have once been a Cold War Soviet spy ship (it was) that was converted to transport tourists. It was not built as a dedicated cruise ship, meaning it has some loveable foibles: despite its petite size, it’s surprisingly easy to get lost; much of the signage is in Russian; the dining room is split into two. Over the voyage, most people end up favouring one side or the other. As the ship hosts fewer than 60 passengers, you start to notice these little habits. You also get to know your fellow tourists well, the expedition staff too. You will almost certainly leave in love with the Pioneer and with more friends than you arrived.

At just 71m, she is the smallest cruise ship still sailing to Antarctica, meaning there’s an unshakeable sense that you’re part of a genuine expedition. Unlike on larger ships, you can do things like sit on the bridge and try to interpret radar readings while the Russian crew make decisions about how best to navigate ice.

The morning we arrived at an unconquerable ice field, just north of Seymour Island in the Weddell Sea, I was standing on deck under a tight blue sky when through my feet I felt the massive engines ease and the ship slow. Minutes later, Expedition Leader Christian Genillard announced that while the captain weighed the prospects of pushing through the pack, we passengers were to board zodiacs. Rather than make a landing, or go snorkelling, the idea was to cruise around the near-frozen ocean, which had been pacified to a glassy calm by all the ice. This wasn’t plan B, or even C, but it turned out to be the most profoundly beautiful morning of the trip. Antarctica is like that: it ruins your plans, then replaces them with something superior.

From the zodiacs, we watched seals and penguins sunbathe on the ice floe, marvelled at turned bergs that looked like sculptures in a pretentious billionaire’s private gallery. Then together we grew silent as we cautiously approached a vast and ancient tabular iceberg. In the orbit of that titan the air was noticeably colder and sound seemed amplified. As though to herald its magnificence, a squadron of snow petrels shot from its frozen cliffs. I’m not religious, I don’t believe in magic, but faced with such scale and perfection, I can only describe it as godlike.

As omnipotent as those icebergs seemed, they are of course vulnerable to climate change, too. Antarctica may currently be a little more resistant to global warming than the moribund Arctic, but that’s not to say all is well. Shortly before my expedition, a British scientific base deep in the Weddell Sea, Halley VI, had to be evacuated when a colossal fissure started creeping towards it along the Brunt Ice Shelf. Sceptics and imbeciles would argue that cataclysms like that are part of a natural cycle. Scientists coldly counter that if all of Antarctica’s ice were to melt, the sea levels would rise by over 60m, razing cities from coasts the planet over. Why not do everything you can to protect it?

On board the Pioneer there were lectures about climate change and the way man is threatening the planet’s last pristine place. Perhaps I’m a denier of a different kind, but I couldn’t face listening to them – and besides, I’ve always found that misanthropy is never far away in Antarctica at the best of times.

It often feels superior because while people aren’t there, animals are in their chaotic millions. They can be cruel at times, apathetic at others, but mostly they’re somewhere between fascinating and hilarious. In Philomena Bay we were surrounded by humpback whales too numerous to count, leviathans rupturing the smooth ocean surface with almighty exhalations. Off Astrolabe we watched deadly leopard seals casually murder penguin chicks making their first, doomed forays into the sea. The scene was happier on Paulet Island where, safe on land, hungry youngsters would chase their penguin parents around the beach like security guards pursuing shoplifters. Once in a while, mum or dad would stop, vomit breakfast into their offsprings’ mouths, then throw the wings back and run off again, the squeaking children immediately demanding more, more, more.

Too soon we were heading north to the Argentinian port of Ushuaia, back across the treacherous Drake Passage, back to the iceless north and email, Whatsapp, Facebook, Twitter, CNN, BBC, letters, bills, real-life, future unknown. By this point, most of the Polar Pioneer passengers were openly discussing their reluctance to log back into it all – certainly not that first morning, but preferably ever. Despite many of the first-time visitors claiming to have felt something approaching spiritual while away, they knew that 12 days off the map was not enough for the world at large to have changed, even if they now perceived their place in it differently.

As we filtered past a perfunctory security check point at the dock, the guard was watching TV, rather than the metal detector. On the grainy screen a yellow-haired hate-peddler was jabbing a small finger at whoever he perceived the enemy was that week. I didn’t know what his words were, but I knew what he was saying.

The person in front of me had seen it too and said over her shoulder: “Life returns, right?” I closed my eyes, pictured a mountain cloaked in snow, rising from shimmering blue cliffs, and remembered that elsewhere in the world things are better.

A version of this feature was publishing in Fairfax’s Traveller in January 2018.