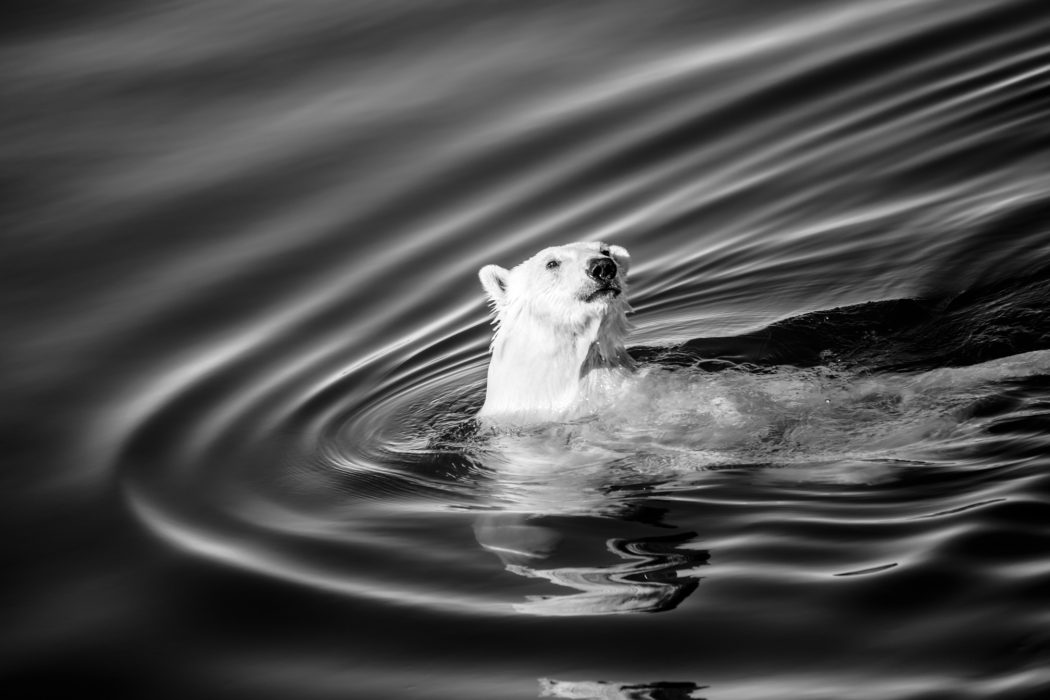 Bears are fierce; bears are cautious. Bears are solitary; bears, the females at least, are dedicated to family. Bears are omnipotent; bears are vulnerable. They are everything we want to be and everything we cannot abide. Those are a lot of human characteristics to project onto another species, especially when we are so ill-equipped to handle them ourselves.

Seeing a polar bear in the wild stirs up all manner of profound thoughts, but right now, this polar bear, the one just a few hundred metres in front of us, is indisputably, unequivocally, yawning.

To the passengers of One Ocean Expedition’s Akademik Sergey Vavilov, this is a surprise. Not the sight of the bear’s deadly teeth, or the way the sunlight catches her powerful jaw muscles, but the fact that we’re only seeing this display because the master predator has grown sleepy. We have been watching the bear intently for two hours now – watching it while it watches a seal’s breathing hole on the surface of some soon-to-be melted fast ice in the gorgeous Palanderbukta fjord. This is on the coast of Nordaustlandet, one of the Norwegian islands that make up the Svalbard archipelago.

The atmosphere onboard has hitherto been anything but soporific. People are afraid to eat or go to the toilet for fear they’ll miss out on some action. In the far distance, two absurdly cute polar bear cubs cuddle each other, intertwined like little white clouds. What if they come in to suckle? What if their mother disembowels a ring seal and feeds it to them? What if? What if?

What if… the polar bear falls asleep? No one had been ready for that. “You wanted to be wildlife photographers? Well this is it folks,” says the ship’s photographer-in-residence Boomer Jerritt in a sort of shouted whisper so as not to disturb the bear.

As the mighty hunter drifts in and out of consciousness like a grandmother on a turgid Christmas Day, a sort of madness seems to befall the passengers of the Vavilov. Many are photographers with high-end kit, so when the bear looks to the left, dozens of camera shutters flutter like frightened birds. A billion megapixels record the moment. The bear looks to the right. A billion more. It yawns again. Another two billion.

For nine hours this game of cat-without-mouse continues until, having spent the entire day essentially idle, the mother bears walks off into the great cold beyond, two little fluffy heartbreakers following in her white wake.

This isn’t our only encounter with polar bears in the Norwegian High Arctic, but it is certainly our longest and undoubtedly the most tedious. Not that anyone complains, not in any meaningful way. Ursus maritimus is after all the rockstar that most of the 81 passengers aboard the Vavilov have come to see during the nine nightless days of the Spitsbergen Encounter programme put together by One Ocean.

Merciful weather and the brilliant eyes of the casually heroic expedition staff help us spot seven other bears during the trip, though at least one of those certainly sees us first, before swimming a couple of kilometres to inspect the ship like the apparition of a drowned coastguard.

The presentation room, buried deep on the first deck of the ship, is where the staff give lectures on ice, bears and other fauna during the scarce downtime we have during the expedition. Inevitably, some of these talks include apocalyptic visions of our planet’s freakishly hot future. It can be hard to learn these lessons while the environment undergoes this invisible disintegration just outside the porthole, but perhaps there’s no better place to mentally prepare for what’s to come. Even so, when I step back out into weather that’s 10C hotter than it should be, or see a house-sized piece of ice fall from glacier face, the Arctic appears wounded rather than going through a natural cycle.

On a less globally cataclysmic level, the plight of the polar bear is easier to understand. As 2018 continues to thrash temperature records and the extent and duration of the sea ice is reduced, so the bears lose their platforms for hunting seals. Some have begun to adapt, raiding some of Svalbard’s chaotic, abundant seabird colonies for eggs, but that’s a lot of omelette before you’ve eaten a seal’s worth of calories.

Elsewhere, reindeer are indigenous and have enjoyed many thousands of years without any serious predation, aside from those harvested by Jack Frost every winter and the hunters near Longyearbyen. However, like almost everything in this fragile ecosystem, this is now subject to change. In their growing desperation for food, polar bears have begun to hunt the deer and while they are mostly reduced to attempting to snatch the old, sick, or very young, there’s no questioning their will to save themselves, despite mankind’s efforts to the contrary.

For now, the polar bear still dominates most minds, on Svalbard and on the Vavilov. One evening during one of the ship’s ‘fireside talks’ kayak instructor Jaime Sharp tells the passengers of his epic 76-day paddle around the islands. It was a world first, completed with two others in unimaginable conditions. “We’d entered the kingdom of the bear… we’d entered the kingdom,” he says, sounding just a little haunted by the memory. His team spent their nights camping on ice cliffs or moraine beaches, sleeping in shifts before epic paddles that could last over 20 hours. Inevitably polar bears were also a significant factor. The group averaged seeing one every other day, of which perhaps eight were looking for dinner invites. Mercifully, for man and beast alike, the bear bangers, warning shots, and prodigious amounts of loud swearing were always just enough to scare them away.

There’s an easy argument to make that they should never have put themselves in such lunatic danger. Bears aside, there’s very little tapering along the Svalbardian coastline; this is not a gentle place – the landscape matches the climate, which is to say it is brutal and hints strongly that humans should not live here.

Yet there’s beauty in this barbarism, too. The magnificent sea cliffs of Alkefjellet look as though they’ve been rejected by the Game of Thrones set designers for being a bit too fanciful. By contrast, they’ve been embraced by 60,000 breeding pairs of clumsy Brunnich’s guillemot, which take off and land as though they’re flying for the first time every time.On the higher floors of this bird city, an arctic fox goes about his villainous business with ruthless intent, killing more guillemot chicks than it can possible eat.

On another bright morning, during a landing at Bellsund, I find myself alone with one, its keen marble eyes occasionally checking on me between naps. The time I spend in his (or her) company constitutes one of those magically intimate wildlife encounters that seem to only happen at the ends of the earth. For a murderous scavenger, the arctic fox can be a cute little bugger.

The same cannot be said for the walrus, whose bloated frames and overwhelming odour we encounter more than once. These illiterate, unwashed masses glide effortlessly through the water, but each beaching is a significant event. As one large bull returns to the pungent embrace of his brothers, he’s met with gurgling protest, the air filling with tusks and flatulence.

The only other grumbling I hear all week comes from a couple of human pensioners who, I have to assume, have been made miserable by their outrageous existential and financial fortunes. Their complaints? That the expedition staff are too happy, too upbeat. On the last night, during the captain’s dinner I briefly gaze past one of these lovely blue-shirted Arctic babysitters and out through a porthole on the starboard side. Behind, in the kingdom of the polar bear, evening sun dapples a glacier face while clouds envelope mountain tops like Cossack hats, and I have to believe that if I worked here, I’d be pretty cheery as well.

A version of this piece was first published in Fairfax’s Traveller in October 2018.