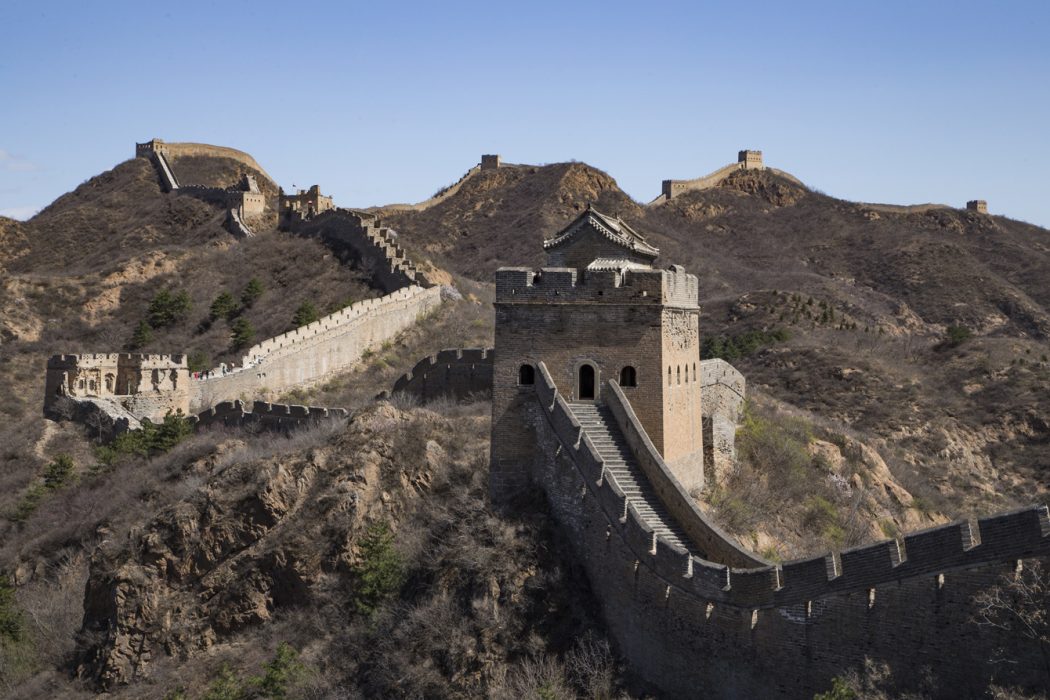 “We are outlaws now.”
These are words that precisely no-one wants to hear, not in China, not with its hard labour sentences and fondness for the death penalty. Of all the Asian nations in which not to be an outlaw, China is just about top of my list. Yet, according to my guide Peter Cao, that is what we have become.
We are standing on a precipice of the Jiankou section of the country’s Great Wall, in an area that is supposedly off limit to the public. It’s roughly an hour outside of Beijing but, perhaps because of the illegality, there isn’t another person to be seen.
I say roughly an hour because I was unconscious for much of the drive, a combination of an early start and lingering jet-lag quickly sending me to sleep as we crept through Beijing’s morning rush hour traffic. When I awoke, I was surprised to be suddenly surrounded by snowy hillsides.
Between the smog in the air and the fog in my brain, it took several glances before I realised that it wasn’t snow at all, but blossom. I leaned forward and asked Peter what type it was. “Apricot blossom,” he said, and nothing more.
That was a couple of hours of stiff climbing ago, but I’ve not been able to get a better read on Peter since. Other than when delivering sermons on the history of Great Wall, he is a man of many steps but few words.
Yet I get the impression as we hike more of the Wall that over the next couple of days, with a bit of coaxing, he may reveal a sense of humour. For example, when I manufacture a question to give myself a break during our first climb, asking if some people come unprepared for the strenuousness of the pursuit, Peter nods and hands me some water. “Some underestimate the Wall,” he says while I caught my breath. “Or overestimate themselves.”
Then there are those who know very well their limitations, he tells me. He had one guest a few years ago who arrived at the bottom of the hill, glanced at the first watchtower on a ridge over 300m further into the sky, and promptly turned around and got back in the car.
It’s a shame they did, as those first hours, though difficult, offer some of the most unspoilt and silent trekking of the whole day. When we stand still, the valley is deathly quiet. Occasional noises seem amplified: the chirruping of little birds; the cawing of a distant crow; the bass-thud of my heart, which seems to have migrated to a spot between my ears.
We move on again, now traversing the top of the Wall, my calf muscles singing an unhappy song. Just following this ancient barrier isn’t easy, but it’s far more forgiving than the climb up to it. Of course, that was the idea – to make the enemy toil and tire before they’d laid a hand on the intimidating stone.
This is not the world’s only great wall, but in terms of its raison d’etre it is perhaps the purest. Britain’s offering, built in the second century on the orders of the Roman Emperor Hadrian, divides scholars on its real purpose. Some say it was conceived as a neat northern border of the Roman territory; others say its purpose was a defence against wild, proto-Scottish tribes known as Caledonians; then there are those who insist that it was really a giant toll gate designed to collect taxes.
There’s no such conjecture over the Chinese version – centuries of Mongol invasions required drastic defensive measures. Each autumn, their horse-borne armies would rampage south, seeking to raid fertile pastoral lands around Beijing. They had little interest in conquering the capital, but while farmers were out harvesting crops, the Mongols arrived to harvest people. They were terrorists, in other words, and the fear they inspired led to the creation of this gargantuan barrier.
To see the Wall and to consider its vastness is more than a little mind-blowing for a first-time visitor like me; for Peter, being here is just another day at work. Over the last five years he’s spent an average of 20 days each month on the Wall, around half of which see him trekking this section from Jiankou to Mutianyu, one of the most easily reached from Beijing. He will be 51 this year, but whatever adjustments his body needed to make for this line of business happened long ago. He carries a large, unnecessarily camouflaged rucksack containing several drinks, our meals for the day and an undetermined amount of camera equipment. It must weigh over 15kg, but he frequently darts ahead of me in order to position himself as my personal photographer. This is part of the service with his company, Great Wall Hiking, though when I look at the shots later I’m never quite sure whether my face is grimacing or grinning.
Each time we stop, Peter tells me more about the Wall. There is an awful lot to tell. It snakes from the North Korean border to the Gobi Desert, with one estimate putting its total length at 9,000km. Only a few metres wide, it is not, as the popular myth holds, visible from space. It functioned not just as an elaborate barrier but as a network for information, espionage and surveillance. Hundreds of years, thousands of lives, and millions of man-hours went into its construction, so even now it stretches across 10 Chinese provinces, which probably doesn’t sound all that impressive, and across three time zones, which probably does.
Maybe I should have expected this next point, but Peter tells me the Great Wall is not even really a single wall. Instead it is – or was – a series of them, made from different materials at different times, erected, razed, rebuilt, damaged, altered, improved, extended, and ultimately abandoned.

It’s understandable that the contemporary custodians choose not to call it The Sprawling Dilapidated Half-Walls of China – and even if they did, that’s not what foreigners would really want to hear. Marketing remains important. As National Geographic put it in 2003: “It wasn’t until modern times, through a combination of foreign misconception and Chinese patriotism, that the ancient walls were symbolically linked by the use of a singular term. Many of the Great Wall’s supposed characteristics – that it is continuous, that the entire structure is over 2,000 years old, that it can be seen from the Moon – are false.”
The focus for Peter Cao and I is all Ming Dynasty Wall, which travels for hundreds of kilometres through Beijing Province, representing a little over five per cent of the massive whole. Some parts around Mutianyu and Jinshanling (where we end our first and second days’ trekking, respectively) have been restored for tourists. Not preserved – restored, brought back to what they may or may not have been in their 17th century pomp. At those sections, hawkers sell ‘I Love the Great Wall’ T-shirts. There is a ski-lift to bring people up, and a toboggan run to take them back down. At the bottom there is a Subway and a lot more people selling a lot more Wall-themed junk.
Thankfully the majority of it hasn’t been degraded in that way. It hasn’t exactly been preserved, either – most of the Great Wall has simply been abandoned to time, the arthritic roots of trees taking hold in fissures, nooks the domain of spiders, lizards nesting in crannies. However, considering how little has been done to protect so much of the Wall, it’s in remarkably good condition. Today it still looks intimidating, still feels unconquerable.
We hike for around four hours on the first day. On the second, we double it, and it’s hot, tiring work, even with the weather on our side. The Beijing climate is one of extremes and I have lucked upon a beautifully clear spring day. Whatever the conditions, though, Wall hikes happen all year: hideously hot and humid in summer, bone-snappingly cold in winter, people scale the old bricks all the same. The risks are considerable and slips, falls and fatigue are common. In rare circumstances there can be much worse – four years ago, the worst winter in 60 years sent temperatures avalanching down to -21C, claiming seven lives on the Wall.
Spring and autumn bring more bearable temperatures – and winds, which mean the capital’s infamous smog is diminished. On our second day of hiking a breeze that starts as suddenly as a hairdryer means the pollution is soon someone else’s problem. More than once, strong gusts cause me to check my balance, but mostly they clear conditions, allowing me to see the Wall stretching to horizon in front and behind me. It lies lank across the landscape, seeming almost organic as it follows ridges like a titanic python. The mind doesn’t have to reach far to look on it as potential invader would have, to see it as infinite and invincible.
Still, there were three major breaches of the Wall, coming almost at hundred-year intervals in 1449 and 1550, then for a final time in 1644, when the Ming Dynasty was overthrown and the great defences abandoned. Each incursion saw tens of thousands of deaths, with the 15th and 16th century events forcing the rulers to re-evaluate the Wall, to improve it and to prepare anew. Fear was their motivation. Peter tells me that the Jinshanling section along which we’re walking is significantly different to what had gone before it, as a result the work of legendary general Qi Jiguang. “Wall 2.0”, he says over his shoulder as we near the end of our trek.
The final kilometre feels almost entirely vertical as we hike towards a five-windowed watchtower. At any time it would be a hard slog, but having walked so far I have to pause at the bottom to consider if it might be impossible. How to find the energy for this last ascent?
The jolt I need comes in the form of two modern-day invaders, American tourists, bare-chested and wearing baseball caps, utterly oblivious to the existence of a wider world. For reasons known only to themselves, these men have Coldplay blaring out of a portable speaker as they walk. Hearing that coming towards me, I scramble up the stone stairs, the fastest I’ve moved in days; it comes in many forms, but horror remains an excellent motivator.