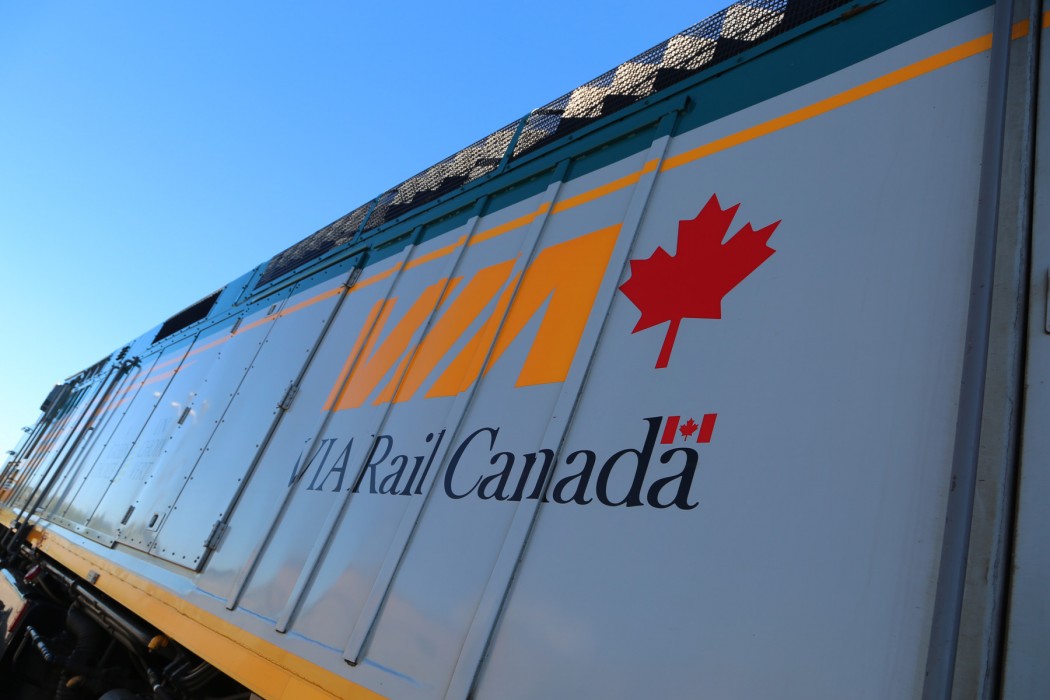 Loose Moose and the Caboose

You could argue that Montreal is the most civilised city in the world. Well-organised, rich in history (and more generally rich), amazingly clean… A great place for walking, Montreal. In the reliable, lovely summers you can stroll in the sun, then when the biting winter arrives, head underground to the city’s warm subterranean malls. Montreal, a town where French and British traditions have, for the most part, integrated; where you can climb the Mount Royal that gives the city its name, then back down and into North America’s ﬁrst Ritz-Carlton. It’s a cosmopolitan town that feels like it can be all things to all people.

When I visit during an Indian summer, I’m not in a rush to depart, but I’m only really in Montreal to leave again, speciﬁcally on The Ocean train which runs almost 1,400km from here to Halifax, Nova Scotia. With only three services a week, there’s not much flexibility. The journey takes a fraction under 24 hours, giving The Ocean an average speed of just 56kph. That’s something like six times slower than Japan’s shinkansen. Air Canada could ﬂy you from here to Halifax in a little over two hours, so to choose The Ocean you either have to love train travel, or hate planes. But of course plenty of people do love train travel, especially through enormous, largely empty countries like Canada.

The train pulls out of Montreal just before 7pm, which, in autumn, means its crossing of the 154-year-old Victoria Bridge, over the vast St Lawrence River, coincides with the sun sliding behind the city’s skyline. Almost immediately, people are being summoned for the on-board dinner service too, meaning they must choose between sunset and sustenance.

Between the soporiﬁc effects of the meal (three courses, all using Canadian produce) and the rocking of the train, it’s not long before people start to think of bed. Most have turned in before we’ve reached Quebec City, and I’m sure everyone is sleeping by the time we cross into New Brunswick a few hours later. The following morning is gloriously bright and long before breakfast people have moved to the back of the train and the observation car. Outside, the Canadian dawn trundles past.

Sitting here puts you almost half a kilometre behind the engine, but it’s only really possible to get a sense of just how large the train is when it sweeps around bends; it’s so long that the rush of the front means a trackside maple-leaf ﬂag is still billowing when we pass it a few seconds later. People up in this part of the world drive trucks because they need them, and wear beards like they mean them. As we rumble over crossroads in Rogersville (population 1,170) a patient old-timer with a Clausian waterfall of a beard eyes us with suspicion. How many times has he watched The Ocean pass through here? This year the service celebrates its 110th anniversary and he may have seen every one.

A lot has happened in that time and the train has, on several occasions, come close to being abandoned completely – as recently as this spring there were discussions over the viability of the route. Even with the freight service (which makes up the majority of traffic) there’s only a small population to reach and a lot of track needed to get to them. The winters are deep and lingering, hard on the tracks. Talks were successful, however, and for now The Ocean continues to surge.

If one day it does cease, it will be a bitter blow to many, but few more so than Steve Burlock. Now 44, he’s spent more than half his lifetime riding the train between Halifax and Montreal as an employee of The Ocean’s owners, VIA Rail. Over the year he’s had many roles; today he is a sort of on-board oracle. Burlock tells me that while the train has had several incarnations, these days the majority of it is actually European- made. The modern sleeper carriages were originally built with the idea of using them around the Continent, following the opening of the Channel Tunnel. But the rise of low-cost air carriers and the increase in the speed of European trains meant that the demand simply wasn’t there. “We got them on a nice price on the dollar,” says Burlock with a grin, “but a lot of work had to go into them to get them North Americanised. We had to change the power throughout, for example, and prepare them for some of the winters we can get here. They just weren’t ready for -40C.” One thing The Ocean doesn’t do is stop. Whatever the conditions outside, the train continues ever on. “You might spend two days at the airport waiting for the right weather, but we go,” says Burlock, a little triumphantly. “Over my 24 years here, we’ve only stopped once, during a very, very bad snow storm.”

The freight companies are responsible for ploughing the route and The Ocean is ﬁtted with nothing more than a “cowcatcher”, which is designed to fend of things a good deal ﬂeshier than snow. Riding the train at times feels like burrowing through vast corridors of pine trees, like some nimble rodent on a BBC documentary. But there’s no getting away from how cumbersome this train is – stopping doesn’t happen quickly and this is a pretty wild part of the planet. Sometimes things don’t get out the way.

New Brunswick is roughly the same size as the Republic of Ireland, but with a population only half of that in Dublin. Around 80 percent of its land is forested, a statistic that seems almost Brazilian. It is one of the world’s great places for autumnal colours, which start in the north and sink south, like a chilling thermometer. At that time of year, some people have employed with the wonderful job title of “leaf peeper”. Folks come from far and wide to see the blaze, signiﬁcantly busying the otherwise empty roads. Yet, in Canadian terms, New Brunswick is a fairly bustling place – if you exclude Newfoundland and Labrador, the collection of provinces known as The Maritimes are some of the most densely populated in the country. To put that in context, the people of New Brunswick are still spread 10 times thinner than those in the UAE, deserts and all.

With all the foliage and with so few humans, animals have thrived, hence the need for the cowcatcher. Occasionally farm animals make their way onto the tracks – allegedly it’s not always an accident, either, as the rail company must pay compensation for any livestock killed by trains – but a more common problem is wild fauna. Moose are particularly fond of the track, says Burdock, especially in winter – why burn all that energy wading through deep snow, when you can follow the predetermined path cleared by the trains?

The lucky moose walk along straight parts of the track, of which there are several, giving the driver plenty of time to slow down. “Most of the time the drivers see them,” says Burdock. “I’ve had it happen before where we’ve travelled for four miles behind a moose, the driver tooting the horn the whole way to try and get them off. We’ve crossed the bridge at Miramichi behind a moose before.” It’s that sort of unlikely event that keeps The Ocean busy with tourists. As Burdock says: “The adventure is not arriving to your destination, the fun is getting there. There are 15 or 20 departures out of Halifax airport… we can’t compete against the airline. We have to separate ourselves and on here you get to see things that you wouldn’t white-knuckling it behind an 18-wheeler, or at 35,000 feet.”

That’s all undoubtedly true, and I nod along in agreement, but while I thoroughly enjoy my time on The Ocean, I can’t help wanting to see more of New Brunswick and Nova Scotia. So although the train makes 28 stops in total, I get off at the 23rd, – Moncton – where I pick up a car and hit the road. There might not be many people around, but these provinces are home to Canada’s prettiest places this side of Alberta. There are a number of geological and oceanic oddities which combine to give it a distinct windswept, salt-blasted feel. Almost every restaurant sells clam chowder and lobster rolls; I want to believe that everyone I meet is inextricably linked to the sea and owns at least one boat.

It’s all driven by the Bay of Fundy, a vast wedge of water 100km wide. It was created when Pangaea broke up and Nova Scotia was almost tugged away to North Africa. For whatever reason, its connection to the Americas was a little stronger and it just about remained attached. The waters rushed in fast and deep and, you might say, have never been still since. Today, Fundy tides are the most extreme in the world, rising and falling by as much as 16m.

The best place to get a sense of this is Hopewell Rocks, where giant stone stacks are covered and exposed throughout the course of the day, like a bizarre geological striptease. When the tide is out you can walk along the sea bed; when it comes in the stacks become islands and you need a canoe for the same route.

Farther south west, on the border with the United States, the pretty seaside town of Saint Andrews lies near the mouth to the giant bay. It’s one of dozens of towns around the world that share the name, but like the Scottish original, it hugs a beautiful coast and is home to a great golf course and hotel, the Algonquin Resort. The American State of Maine is just a three-wood or so away across the Saint Croix River.

The rest of my time in Atlantic Canada seems to be spent driving, which is no hardship in this great wilderness. From Saint Andrews I turn east again, along the scenic Fundy Trail, which hugs the bay all the way into Nova Scotia, then further east, past any train line, to Cape Breton Island and its Highlands National Park. I’ve pushed hard to get here in order to make it onto the Cabot Trail, one of the ﬁnest driving routes on the North American continent. It’s a mass of bends and trees and signs warning me to mind the moose. The culture and history here may be quite different – broadly Celtic, for one thing – but the theme is largely the same as throughout Atlantic Canada: seas of green trees, endless rugged coasts, and legions of wild animals, all under a big sky.

A version of this piece was published in Etihad’s Aspire magazine in October 2014.