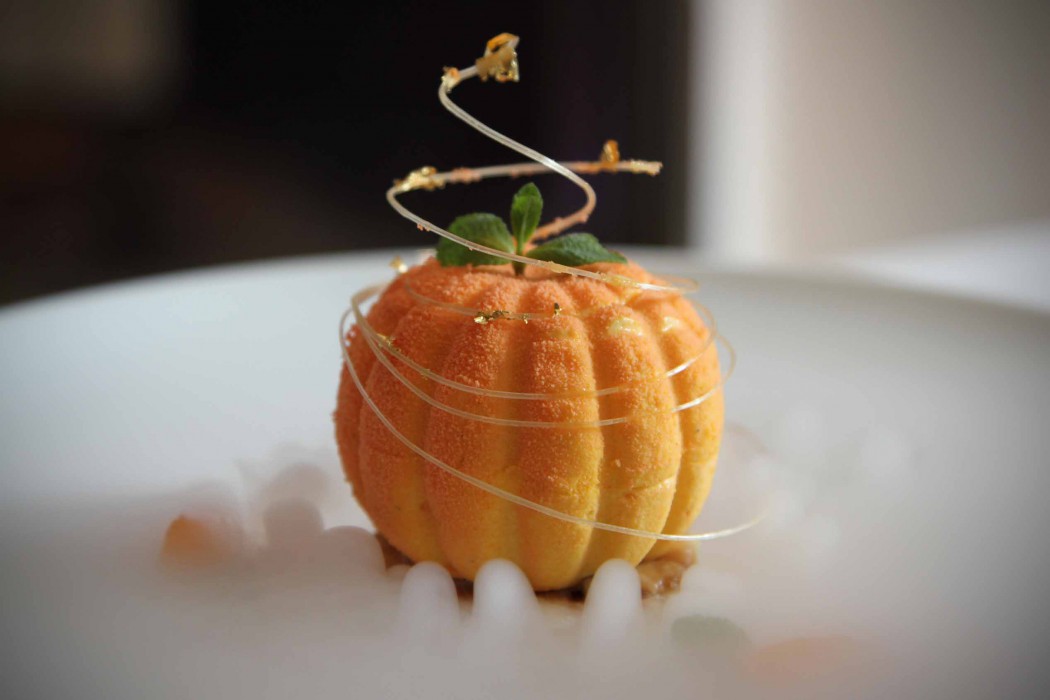 I’m sitting in Benoit, France’s only Michelin-starred bistro, dipping a profiterole into a primordial tar of dark chocolate when I experience two emotions. They occur simultaneously, as the little globe ruptures against the roof of my mouth forcing thick cream and chocolate through my teeth and into my greedy cheeks. The first is satisfaction that, despite filter-feeding like a gluttonous whale, I have perhaps reached the pinnacle of human existence. The second is one of pity: this is Paris fashion week, and en route to this 100-year-old eatery, I passed a number of models tottering off Paco Rabanne’s catwalk. I feel pity because those lurching ladies’ careers will never allow them to experience the culinary week I’ve had – those poor, poor girls. I’ve driven almost 1,000km through France to get here, using Michelin’s advice to take us to some of the finest hotels and restaurants in the country. In more ways than one, it’s been a fat week.

Five days earlier, and my partner Katy and I are sitting in Pressoir D’Argent, the gastronomic restaurant in Bordeaux’s aptly-named Grand Hotel. It’s very different to Benoit, where waiters shout, the smell of the soup wafts across the restaurant, and strangers sit elbow-to-elbow. No, Pressoir D’Argent is a much smarter affair – much more Michelin.

And yet it and Benoit have the same number of Michelin stars: one. The Guide’s judgement has been considered sacrosanct for so long now, the name has become a byword for exquisite cuisine but why does any of it matter?

For non-savvy, non-French types, it’s important to know that Michelin stars (often pronounced with a tentative hint of French: “Mish-lun”) and Michelin tyres (the airs and graces discarded: “Mitch-e-lin”) are dispensed by the same company. Founded in the late 19th century by brothers Eduoard and Andre, the Michelin tyre empire was a young company when, in 1900, it decided to produce a driving guide to France. At that time, the public were still unsure over the long-term future of the auto-mobile – what was wrong with a train? Or a horse? The Michelin brothers’ logic was simple, but effective: encourage people to get out on the roads, to buy cars and, ultimately, tyres – their tyres.

“This work comes out with the century,” wrote Andre in the preface to their first edition, “it will last as long.” He was right, and as the tyre business grew, so did the number of judges employed by the firm. Crucially, the money from the core business meant Michelin could afford to pay for their inspectors’ trips, allowing them to remain “famously anonymous”. By the 1930s, the Guide had expanded to review not just destinations (those green-covered guides are still produced), but individual hotels and restaurants; thus the Red Guide was born, a not-so-humble little book that would go on to shape the planet’s eating habits.

It’s tempting to compare the announcement of a new edition of the Guide in France to the Oscars, except the Oscars are a good deal more predictable, and a lot less feared. Brad Pitt frequently fails to win Academy Awards but becomes richer and more famous year on year. The same does not happen to Michelin-starred chefs. Winning one can add as much as 15% onto a business, but losing one has at least the opposite effect. When one looks at the highest levels – the three-star chefs – it’s a promotion or demotion from a club of just 105 global members that includes the likes of Gordon Ramsay, Joel Robuchon and Alain Ducasse. At that level, it’s the difference between being the chef of a restaurant in which couple go on dates, and being an international celebrity, author of cook-books, and/or tyrant of the small screen.

Even though they are tied to its automotive origins, the Guide’s definitions of its stars are so matter-of-fact as to seem breathtakingly arrogant. The hallowed third star means nothing more than: “Exceptional cuisine, worth a special journey.” It does not claim to be a life changing event, nor does it say that meals will likely cost over $300 a head. It’s just worth getting out the house for. Meanwhile, two stars – held by the likes of Wolfgang Puck; or Noma, Restaurant Magazine’s official best restaurant in the world – isn’t even worth that effort. Michelin’s verdict is just that it has “excellent cuisine, worth a detour.”

Finally, a single star, the kind of thing a chef works his whole life for, means simply: “An excellent restaurant in its class.” It doesn’t sound like much, but one star is all they have here at Pressoir D’Argent.

And yet the meal they lay on for us is comfortably one of the most unforgettable we’ve ever eaten. The starter, two fat scallops and a buttery foie gras swimming in a bowl of chestnut, black truffle and hazelnut froth, is a juicy joy. The wine that’s been paired with it is a light Bordeaux which cleanses residual fat from every mouthful, allowing the flavours to dance across our tongues anew.

This before the main: a hearty portion of beautifully-cooked Atlantic Sole, served with an oyster béarnaise, the chef’s speciality. Now a different wine arrives, fleshing out the taste, somehow adding to the overall experience. This is wine-pairing at its best – as Katy points out: the food is the outline, the wine the colouring in.

I’m not the first to doubt them. Michelin examine several thousand restaurants around the world, but they have some yawning gaps in their CV. Take Singapore: the island-nation has a number of highly decorated chefs (including Robuchon, the world’s most-starred cook) with dozens of Michelin stars between them, but none for their Singapore establishments as the Guide has simply not been published there.

Similarly, it’s not in Brazil, so D.O.M – a Sao Paulo restaurant often cited as the best in South America, and number seven on Restaurant Magazine’s 50 Best list – has the same number of stars as Jamie Oliver, or my local Chinese takeaway: none.

Still, in almost every country the Guide has visited, it’s gone on to become the authority on fine dining – everywhere except New York. To try and boost sales, Michelin took the unprecedented step of letting one of their anonymous judges talk to the New Yorker. The 2009 interview detailed the life of an inspector – the vast amount of food they must consume, the obscene level of detail each report must contain – with endless facts on their thoroughness. For example, the best restaurants are visited by several inspectors at different times of the year to ensure their superlative quality.

That means places such as Domaines Des Hauts De Loire, a charming little chateau in the heart of the Loire Valley, will have been examined on a number of occasions in order to maintain their two stars for the 2012 Red Guide, which was released in French on the day we arrive. Thankfully Michelin’s official app is available in several languages and it was that we used to navigate here, up the French Atlantic coast, through the gorgeous seaside town of La Rochelle, and in-land, along the Loire River. It was a long drive, with scenery and cuisine changing in tandem.

Several hundred kilometres from the coast, game is popular. When we sit down for dinner, we’re served rabbit as the main, served three different ways, with tiny vegetables that Bugs would have enjoyed before he headed to the big rabbit patch in the sky. That followed by the chariot de fromage, which has over a dozen different varieties, ranging from the bland to the Boulette d’Avesnes, a pungent, red mound the unveiling of which is tantamount to the air-con pumping out pepper spray. A kind local sitting at another table volunteers me to try what I later discover is also know as the “suppositoire du diable” (the devils’ suppository). On trying it, my mouth seizing up with its toxicity, I think that’s probably a kind description. The dessert, a sumptuous salted caramel and chocolate mousse, can’t come quick enough.

The meal is excellent – it’s impossible for us to find fault – but it’s definitely less spectacular than the offering in Bordeaux. Despite having one less star, we preferred the ambition and out-right showmanship at Pressoir D’Argent. But this weak-minded personal preference is precisely the kind of thing the Guide seeks to avoid. Domaines Des Hauts De Loire is rated higher because a judge, or judges, thinks they’re more consistent than a one-star restaurant. As the anonymous inspector told the New Yorker: “It’s not really a ‘like’ and a ‘not like’ – it’s an analysis… You’re looking at ‘Was every single element prepared exactly perfectly, technically correct?’ And then you’re looking at the creativity. Did it work? Did the balance of ingredients work? Was there good texture? Did everything come together?”

Those are the kind of questions that Pierre Gagnaire has been answering correctly for years. These days his name is attached to over a dozen restaurants around the world, but his signature restaurant in the heart of Paris is his culinary home, and our final stop. Bibendum, the portly Michelin man, has been smiling in this direction since it opened in 1996. By 1998, while France were winning the World Cup a few miles away, Gagnaire was being awarded his third star. Fourteen years later, the restaurant remains as grand and unapologetically elitist as it has ever been.

As we sit down in the darkness of the afternoon, I don’t mind admitting to a childish nervousness. This isn’t helped when I notice that some diners at other tables are wearing diamonds bigger than the first minuscule offerings from the kitchen. These tiny morsels are followed by crab, leeks and pomegranate; goats cheese with salmon roe; golden turnip and beetroot; nettle and fennel purée; and haddock on white bean. Unbelievably, this is only the amuse-bouche: five micro dishes, each as perfect as a baby’s toes.

The meal progresses through another half-dozen dishes, each mind-blowing in its own way. The highlight is perhaps the salpicon of scallops cooked in a Jerusalem artichokes infusion with a hint of mustard, and a segment of Rubinette apple flavoured with maniguette. It’s a firework display of flavour and no exaggeration to say that it’s perhaps the single most satisfying dish I’ve ever eaten. Not that all the courses are so showy: the main, poached guinea fowl with winter legumes and a sage sauce, is essentially meat and two veg.

Two hours later, it’s all done and by the time we step out into the cold air, we’ve got several thousand calories in our bellies and enormous smiles on our faces. It’s almost boring to say so, but the restaurant the Guide rated highest was indeed the best one we found all week, anywhere in France. Perhaps anywhere ever. Does that make the Michelin’s advice infallible? As we stumble towards the Champs-Elysees, I can’t be sure. Instead we concentrate on putting one foot in front of the other to try and burn some energy and work up an appetite for dinner at Benoit. Ahead, we see some models, starved and unhappy, fall out of a gallery and onto the street. We’ll never be part of the same world, but as I start to search the Michelin Guide for directions to the next restaurant, I couldn’t be happier with my lot.

A version of this piece was published in Fairfax Media’s Traveller in July 2012.