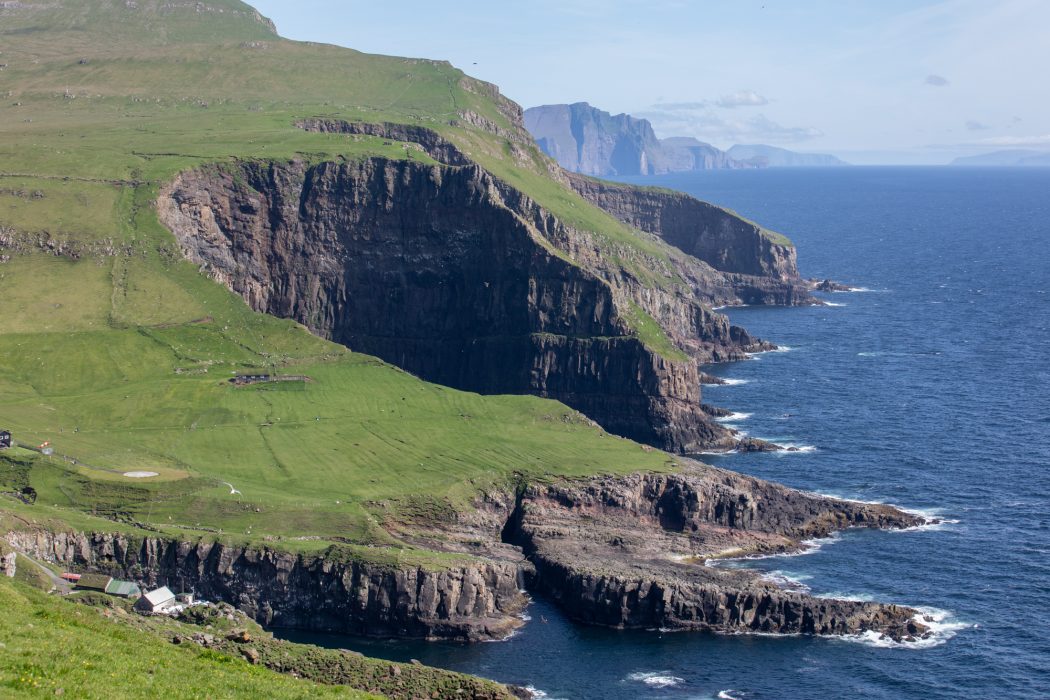 “Where did you get this from?” Asks Ragnar as he approaches my rental car uninvited. In a long list of nations that aren’t the Faroe Islands, this sort of behaviour might make me nervous. Yet up here, half way between Scotland and Iceland, everything has the feel of a village, which is to say essentially harmless, if a little nosey.

We have some dull talk about car hire before Ragnar asks for a lift to the local supermarket. I have a little spare time before my ferry to the puffin-packed island of Mykines, so I agree. “I’ve seen so many of these cars around, so many tourists,” says my new passenger between giving me directions.

I ask if he’s noticed more of late – the Faroe Islands is said to be undergoing something of a tourism boom. Yes, he says, between living here in Sørvágur and studying over in the capital of Tórshavn, it’s been impossible to ignore the influx.

When I ask if that includes locals, Ragnar uses his excellent English to explain with colourful profanity what he’d say if he was asked to pay a single krone.

In the last couple of years, visitor numbers have soared in the Faroe Islands, thanks in part to slick marketing and moreover a growing sense that neighbouring Iceland has been overrun with mass tourism. Greenland has also enjoyed a boom by similarly hinting that if you want follow the Viking routes without the crowds, then it’s a great place to visit.

The main aim for the Faroese is not to compare themselves to their would-be rivals, but to simply let people know that they exist. This archipelago has only been settled for around 1,500 years, making it something of a baby in terms of European habitation. For the last millennium it’s been the territory of Vikings and their descendants – first Norwegians and, since 1814, the Danes.

Denmark continues to administer the islands today but while they use the mainland currency, the 53,000 people living here have kept a strong sense of independence: they have their own flag, their own dialect, and refused to join the EU when given the chance.

Remote and God-fearing, there are undoubtedly times when the islands have an element of time-travel about them. This can take the form of their traditional clothing – heavy knitwear expertly made from the wool of the overabundant sheep which roam the islands in greater numbers than the people – or with the food, which includes wind-dried, fermented mutton.

Nonetheless, there’s no ignoring the appeal of the place. Alongside its gigantic puffin, gannet and petrel colonies, it as some of the highest sea-cliffs in Europe, and the famous turf-roofed houses make it a favourite for photographers. In 2017 it saw another string added to its bow with the arrival of an unlikely Michelin star.

That accolade came for the seasonal fine dining restaurant Koks, which has since been awarded a second of those cherished etoiles, despite only being open over the boreal summer. This followed a glowing write-up in the New Yorker (“In an era when matcha macarons and eel ceviche are available across the globe, its patrons were thrilled to spend an evening eating things that nobody they knew had ever eaten”) which didn’t shy away from the fact that Koks makes the most of local ingredients, including courses featuring whale meat.

I don’t get a table at Koks during my visit, nor do I see the islands’ infamous pilot whale slaughter, and as much as I’m annoyed by the former, I am relieved by the latter. Each year the Faroese butcher between 800-1,000 pilot whales, herding them into bays at the heads of fjords around the country, before getting waist-deep into an increasingly red tide to murder them up close. It’s a horrific scene, every bit as repugnant and grotesque and Japan’s oft-condemned Taiji dolphin hunt, yet seemingly with a fraction of the international reproach.

So far as optics go, this is undoubtedly the most off-putting element of life up here – the Faroese are welcoming and polite but it’d hard to relate to them when they’re spattered with the warm blood of another mammal.

Yet it’s not exactly hidden from tourists – some of the most popular restaurants in Tórshavn proudly advertise the fact that they have whale steaks and blubber on the menu. Less well publicised is the toxic levels of mercury contained within those animals, but when I walk past Raest (which always has pilot whale on its menu) there isn’t exactly a protest going on. In fact, from the window it looks like almost every table is full of foreigners, many with camera phones in hand.

If a Faroese person argued that one morning of misery for a pilot whale is no worse than a lifetime for, say, a pig in the squealing bedlam of an industrialised farm, I’m not sure I’d have much counterargument. But still, the particularly bloody way these sentient creatures are killed feels impossible to ignore.

The only meaningful conversation I have about the whole thing comes on the island of Mykines with a young local official who starts talking before I can declare that I’m a journalist. “Yes yes, but we only eat one type of whale,” says the man I’ll call Jesper. I ask about seabirds – we are surrounded by a mega colony of puffins, are those eaten too?

“No,” says Jesper as though it’s a daft question. “Not for the last few years. But, how you call them? Gannets? Here on Mykines, they eat them.”

Has he tried it?

“No!” Jesper says, a little indignant again. “My family doesn’t own land here, so we cannot. But the fulmar chicks, we eat those. The first time they fly to the sea they cannot get back out, so people go with a net and pick them up. They’re so tasty – so fat.”

If this seems barbaric, then its tempered somewhat by the baffling abundance of seabirds here on the Faroes’ westernmost island. Across species, numbers are said to be in decline and while I absolutely believe that, it’s hard to imagine how more could even fit on the island. Birds of several shapes and sizes seem to cloud the skies like interference on an old television, a sight made all the more overwhelming by the fact that I’ve caught Mykines on a day of almost endless sunshine.

It’s not always like this – there are Faroese islands where it rains 300 days a year. Perhaps that inclement weather will be enough to quell the rising tide of tourists. Even in the long days of summer, the island can be shrouded in fog or lashed by rain and gales, and I find it very telling that even the official Visit Faroe Islands Instagram account tends not to show bluebird days, but intimidating cliffs dramatically framed by clouds the shade of ripe bruises.

Come here on a good day, however, and it can feel like Europe’s Hawaii – wild islands locked in a sensational beauty contest, the only real mystery being how they could have been so ignored by the wider world for so long.

In four days on the Faroe Islands, if there’s an ugly part to them, I don’t see it. That said, for about 48 hours, the summer fog is so dense, I can’t see more than 50m ahead of me, let alone judge the scenery.

Weather and whales aside, officially the Faroe Islands is so concerned about mass tourism that they made international headlines in early 2019 by announcing that they were “closed for maintenance”. This seemed like a bold countermeasure in the face of their huge influx of visitors.

On closer inspection, however, this was actually another cunning marketing ploy – an advert for their ‘voluntourism’ projects which see visitors arrive to actively improve the islands by joining in on the maintenance of paths, the erection of signs and other basic infrastructure work.

Some people on mainland Europe think of the Faroese as almost backwards people, but getting tourists to better prepare the islands for the arrival of yet more visitors seems like a devilishly advanced idea to me.

A version of this piece was published in Traveller in 2019.