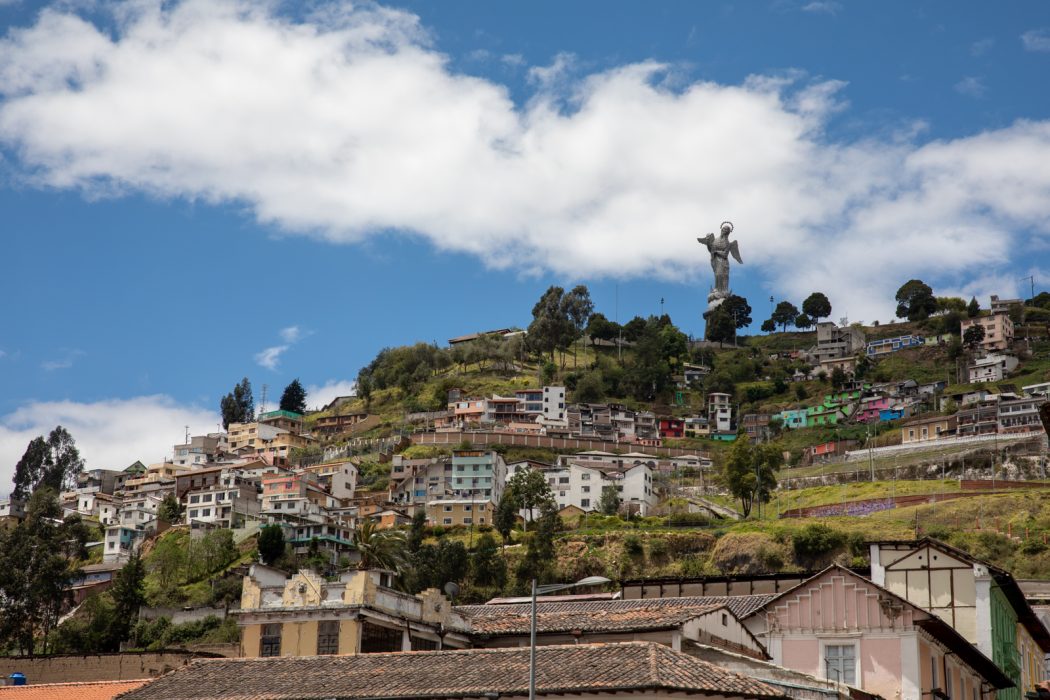 Over the next year or two, if travel writing still exists, it’s going to have yet another Covid problem, specifically whether or not keep acknowledging the compound squalors of the pandemic and their effects on the industry. Eventually people – I mean editors – are just going to want writers to ignore it, move on, stare hopefully towards the golden horizon and give advertisers no cause for alarm.

For now, as the world slides back into the mire, there doesn’t seem to be much to be gained with such ignorance. And, even if I’d wanted to pretend everything was just fine, the diminutive medical attendants in hazmat suits at Quito airport would have made that impossible.

Within moments of being in Ecuador it was clear that this little Andean nation is taking the death business far more seriously than the UK. They have learned, albeit in the hardest way imaginable. A New York Times report from Guayaquil in April described an apocalypse as seen by a doctor: ‘There were corpses in wheelchairs, in stretchers and on the floor in the emergency area, he said. The smell was such that the staff refused to enter. Several of his colleagues fell sick and waited in wheelchairs for patients to die, hoping it would give them a chance to use a ventilator.’

Now the borders are finally open, there are robust checks and measures for anyone entering the country, including the need for a negative PCR test on arrival. If, like me, you eventually hope to get to the Galapagos, you’ll need to get a second in-country.

Things didn’t relax outside the airport. Hand sanitiser was thrust in front of me at every turn and it was quickly clear that I wouldn’t be able to take my mask off until I was in my room. If these precautions seem at all excessive, I had reminded myself of the horrors of the spring.

From the airport, I was transferred to my hotel, the excellent Casa Gangotena on the edge of Plaza de San Francisco in the historic centre of the Ecuadorean capital. Inside, the check-in process was entirely digital, but it only came after I’d walked through boot-dip, the likes of which I haven’t seen since Britain’s foot-and-mouth crisis in 2001, then an odd sci-fi Ozone chamber where I was sprayed by some kind of invisible disinfectant as though I was returning to the Nostromo from the surface of a dangerous planet.

The following morning, I was taken on a walking tour of the colonial neighbourhood. No matter where we went, alcohol gel was ubiquitous, as were temperature checks, which were taken from the wrist rather than the unsettling business of having a gun aimed at the forehead. Bars haven’t reopened at all; many restaurants are down to just a few days a week. The city had the feeling of a timid Sunday.

The overall usefulness of all this is probably unknowable, but a side effect is that The Problem is never far from the public consciousness. Just in case there’s a chance of forgetting, the streets are awash with police who can issue $100-on-the-spot fines if you aren’t wearing a mask.

Covid-19 clings to every surface, even when it doesn’t. Visiting a market a few blocks away, I was sprayed at the door with disinfectant from something that looked like it should’ve contained weed-killer. Perhaps it did.

Inside, my guide Vanessa introduced me to Adriana, a fifth-generation medicinal healer. Reader, she knew of no indigenous cure for Covid, but her shop did have an impressive display of herbal remedies and potions all the same. A hilariously amateurish label bearing the image of Rambo was stuck to a bottle of malt extract; a low resolution shot of Our Lord and Saviour Jesus Christ was on the other. Next to these, a bottle of hand sanitiser. I knew which one I’d have trusted.

Adriana also mentioned that she had coca leaves, but no cocaine. She then showed me a small piece of brown bark. “Do you know ayahuasca?” She asked through Vanessa. I said that I was aware of it, but hadn’t tried it yet. “It’s strong,” she said, “you have to be careful.” Under my mask, I smirked at this mild description of a hallucinogen so powerful it can lead to permanent restructuring of brains in some instances, and murderous frenzies in others. Still, I’d merrily gnaw on that strange bark ahead of injecting myself with bleach. Ultimately neither would grant relief from Covid, but at least the ayahuasca would help me ignore it for a day or two.

Back out on the street I was getting plenty of attention. In a country where I’m several inches taller than the national average, plus blue-eyed and, let’s be generous and call it ‘light-haired’, I stand out. The mask did little to hide any of that – and the plaid shirt I wore only emphasised it. With so few fellow gringos around, I must have looked very foreign. But I think it’s good to feel like that, once in a while – or healthy at least, to be a curious novelty, just a bit afraid of being so visibly Other.

A little way down the hill we stopped in to visit Guadalupe, a milliner. She makes around a dozen styles of hats, including local fedoras and the famous Panamas, as well as an array of upsetting masks. Many represent politicians, local and international. She explained that they’ll eventually end up effigies, then pyres around the country as people look to burn away the bad spirits that’ve plagued them throughout the year.

If they’re committed to that, the smoke rising from Ecuador at the end of 2020 will surely be visible from outer space.