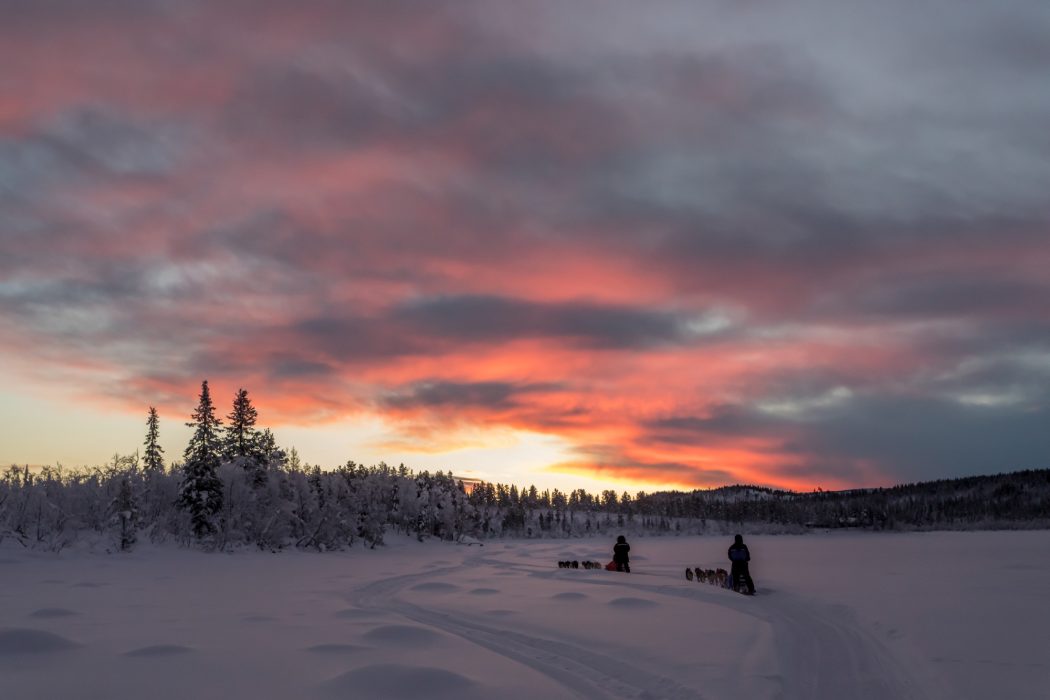 Like many young boys, the most upsetting thing I could hear as a child wasn’t that my mother was angry with me, but that she was “disappointed”. Thankfully, it’s been a while since I felt that particular kind of upset. Or I should say it was a while – despite having only just met her, Lumiki fixes me with that withering gaze; she isn’t snarling, or barking, but her disappointment is plain to see.

All I’ve done is apply the brake, two crude spikes on the back of my sleigh. Feeling me deny her the chance to run, Lumiki flashes that terrible look. “Why?” She seems to ask. “Why are you disappointing me?”

Her name means Snow White and, along with dependable Viper, she is one of my two lead sled-dogs. They are joined by Tuomi and Musta, who run behind and will provide most of the power to pull our sleigh. It’s late December and we’re on a week-long trip with Nature Travels in northern Sweden, well inside the Arctic Circle, where the sun won’t breach the horizon for a month.

Following German guide Marion Kanerva, myself and a lone American tourist manage our own teams of huskies as we traverse the vast white of the far north, moving between off-the-grid cabins in the Swedish wilderness. Though this kind of trip is not actively dangerous, most days the temperature is below -10C. Without the dogs we wouldn’t survive long in those conditions, and without us… Well, the dogs would probably be fine.

The adventure starts from Jukkaasjärvi Vildmarks Turer, a large kennels just a few kilometres outside Kiruna. The facility is essentially an athletes’ village, home to 200 amped-up, pedigree hounds, born and bred to run. When they see harnesses approaching, or other dogs being attached to sleighs, the forest descends into howling bedlam.

As the cacophony builds, the huskies get more and more excited, sometimes losing control and snapping at the dog next to them. Occasionally this mass of energy and confusion spills over into outright violence. In the world of the Alaskan and Siberian husky, there is a good deal of workplace harassment. 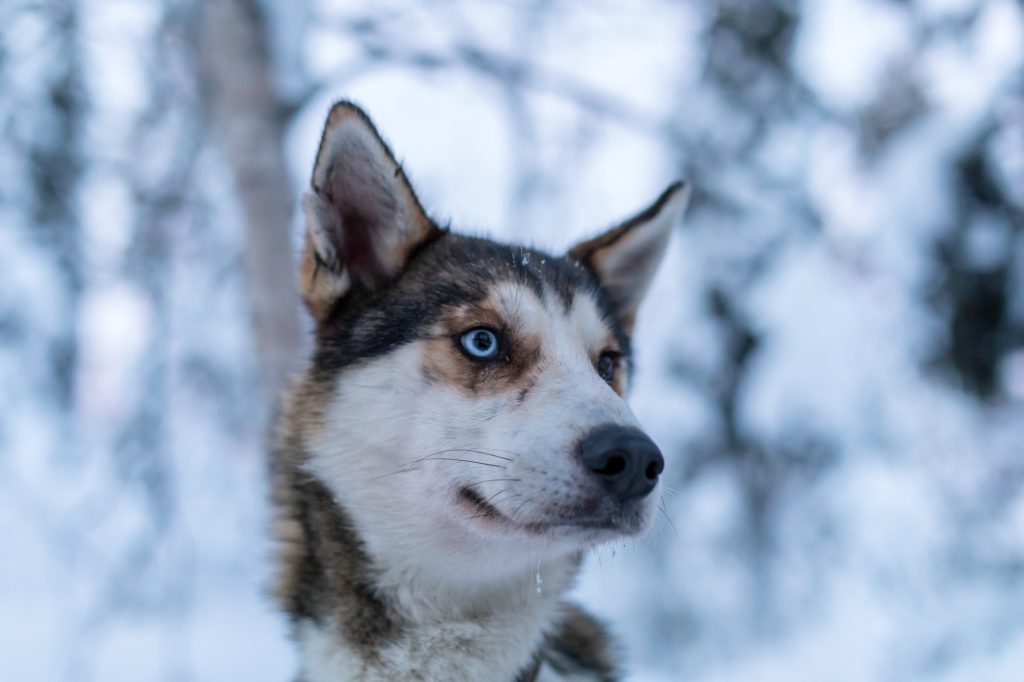 When you hear the word ‘husky’ you probably think of a sort of White Fang figure, wolfish and enormous. Racing huskies bear little resemblance to that lupine ideal. They are smaller, scruffier, dirtier, madder. They are infinitely more reliable too, with stamina to burn and a will to run stronger than any other breed of dog.

The noise is incredible, though, the dogs yammering and howling and barking while pulling hard against their anchored sleighs. To the first-time rider, this can be an intense, intimidating experience. The rudimentary anchor struggles to hold onto the snow and when the time comes, there is absolutely no need to say ‘mush’ or any other words of encouragement to these animals.

The moment they feel no resistance, we’re off, racing between pine trees and out into the cold beyond. At that moment, something very strange happens: as the dogs set to their task, there’s an almost monastic silence. This quiet after such a din feels something like turning off a television that’s been blaring white noise for an hour.

The days out on the trail vary in many ways, but this quiet after the storm is a constant. So long as the huskies are running, they are content and once we’re out onto frozen lakes and rivers, they go onto something like autopilot, following Marion’s lead sleigh along paths ploughed by snowmobiles at the start of the winter season.

Hanging off the back, bumping through the frigid Arctic air, there’s plenty of time to look around – and to think. Some of my thoughts are quite profound; others are total nonsense. One morning I spend far too long wondering if my eyes give me an advantage in this gloomy, northern environment. Some huskies have blue eyes; I have blue eyes – maybe there’s some crossover there? For a while between the pink light of the 11am near-dawn and the amber glow of the 1pm non-sunset, it seems to make sense.

At other times, I think about how little this process has changed over the millennia since people first started yoking dogs to sleighs. The ropes may now be made of synthetic material and the bindings of forged steel, but the birch-wood sleigh is as prehistoric as the dogs’ energy.

Simply standing on the back of the sled and enjoying the scenery is lovely, but idleness is the principal ally of elemental cold, and so in a bid to keep the blood pumping, I often choose to jump off the back and run as though pushing a stalled car. The tactic works – dashing through the snow, with a four-dog zipped-up sleigh, warming as I go, panting all the way. 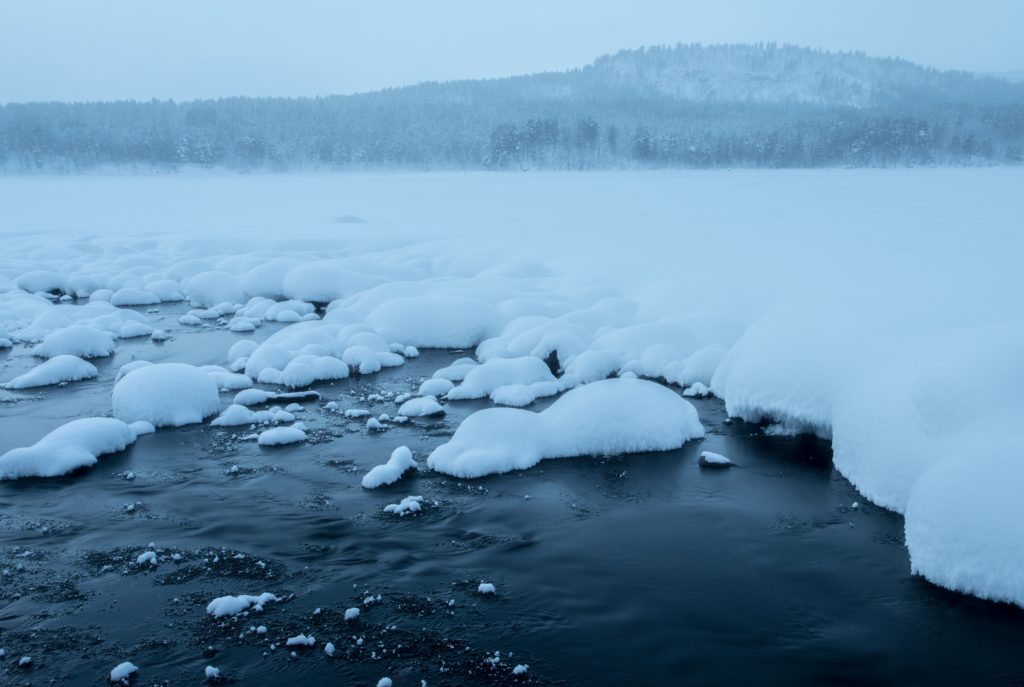 There’s something that feels true about this way of travel, something natural. When a boisterous snowmobile roars past my team, I can’t help feel that its driver is missing out. I think too of the Great Age of Antarctic Exploration and Robert Falcon Scott, who took his doomed party to the South Pole using ponies and motorised sledges, while Amundsen – who made it first and lived to tell the tale – relied on a huge team of sled dogs.

It’s important to switch off these kinds of reveries travelling through snowbound forests, when maximum concentration is required to avoid accident. Coming downhill I need to make sure I don’t accidentally run-over my own team, while ahead I must look out for low-lying branches, bent by heavy snow to make scenic but potentially problematic archways.

In some ways, the work really starts when we arrive at the cabins each afternoon. After running for anything between two and four hours, the dogs have been made more docile by fatigue, but they know food should be coming within the hour and so remain at least a little agitated. “We take care of the dogs first, always,” says Marion. That means unharnessing and attaching them to fixed chains outside individual kennels.

Our cabins are true outposts, basic in the extreme, with no running water, nor any electricity. In December, it’s completely dark by 3.30pm, meaning all the work inside must happen by candlelight. Outside, meanwhile, we use head torches, both when fetching water (from wells or pre-cut holes in frozen lakes) and when preparing the dogs’ meals. 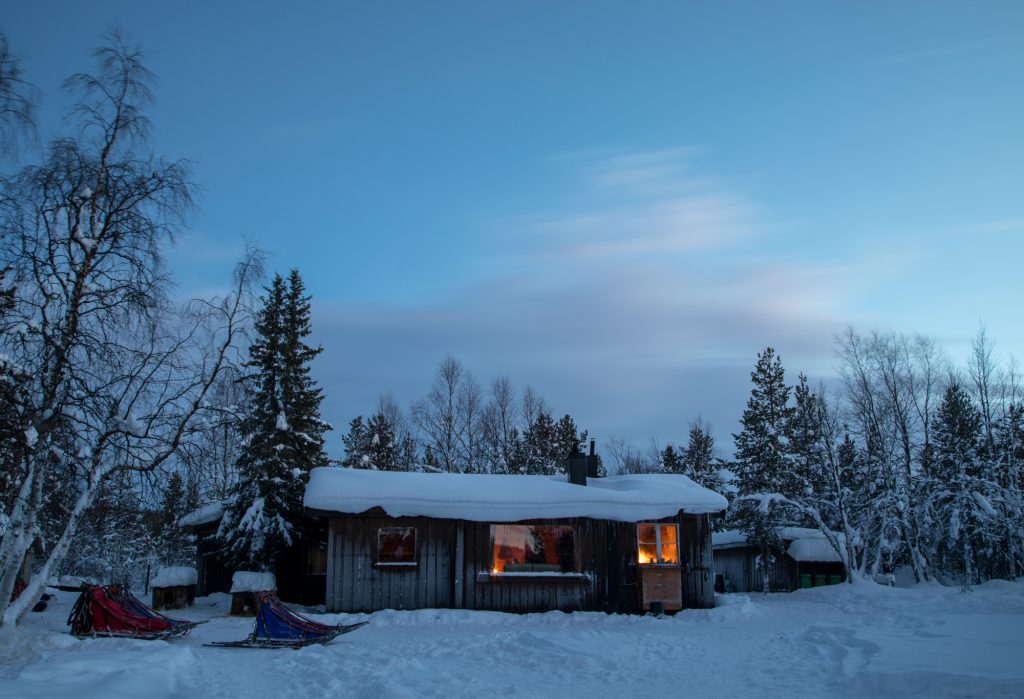 Once boiled, the water is used to defrost pungent, high calorie, high fat meat which helps replace the thousands of calories the dogs lose on the trails. When the temperature gets colder then -10C, which is often, the meat becomes granite-hard, meaning I work up another sweat by picking up an axe and having at the sausage like a berserker hacking a Lindisfarner’s thigh.

“Some people come here and expect just to have everything done for them,” says Marion one evening, “but a guide absolutely could not do all this for a whole group – everyone has to be involved.” The good news is that once the dogs have been fed for the day, everyone can clock off – and any time after 4pm at these latitudes, there’s a chance of seeing the Northern Lights.

These days there’s less need to stand hopefully outside as the thermometer drops lower and lower (bottoming out at -30C during my trip). Instead there are dedicated apps that accurately predict the amount of solar activity and likelihood of a clear sky. On the final day of our trip, we get a promising forecast and around 10pm the sky is transformed into a great grey-green river, a cosmic lava lamp. I wait for the huskies to howl like banshees, but they seem as reverent as we are. 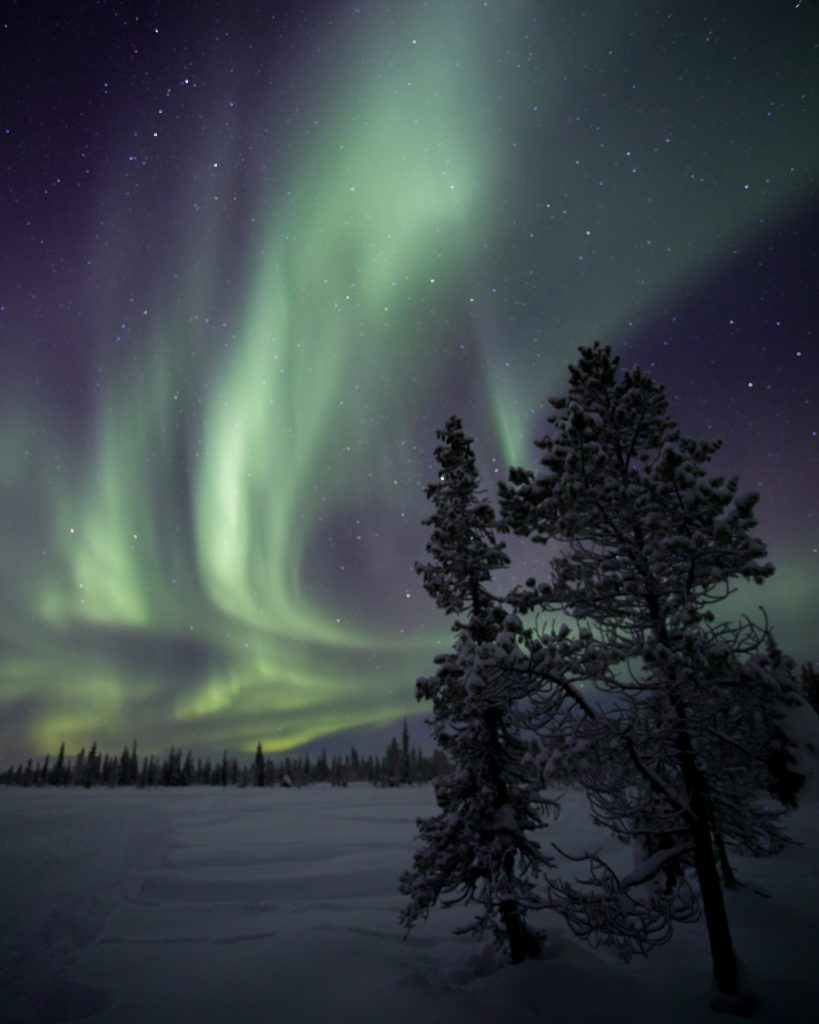 It’s an amazing sight, rivalled only on an afternoon during those extraordinary hours of dawn-dusk, when our small group and its rag-tag hounds is overtaken by an Arctic legend. Everyone around Kiruna knows of Taisto Thorneus, identifiable from afar thanks to his seal-skin jacket and intimidating team of 12 dogs, always running as though towards battle.

They say he can silence his hounds just by glaring at them, but as he passes us he makes a sort of growling noise to deter his huskies from interfering with ours. We don’t speak to each other, but as a mammal I knew what he means. Thorneus’s dozen dogs put their heads down and strain away from the noise, galloping in majestic, synchronised stride. Before long, his huge sled vanishes into the frozen peach-coloured air, leaving only tiny particles of ice dancing in his mighty wake.

A version of this piece was published in The National (Abu Dhabi) in January 2018.