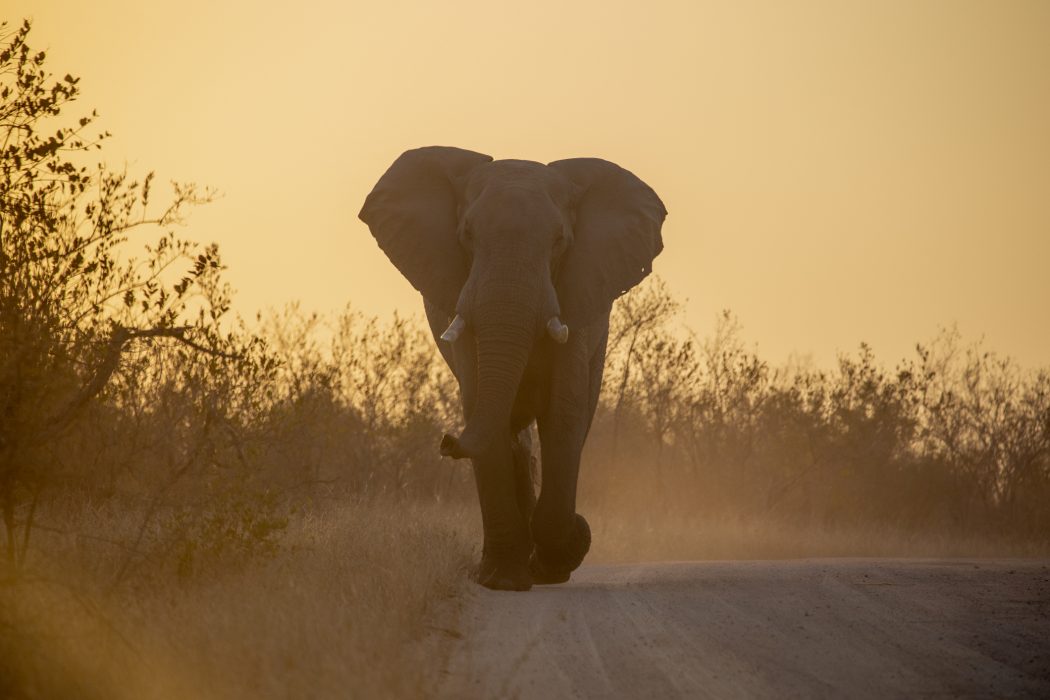 At first it looks like a storm cloud gathering on the horizon. On a hilltop perhaps 500 yards dead ahead, dust is erupting in the yellow hues of dawn, shafts of early morning light shooting through agitated particles like lasers. These perfect lines are then interrupted by a huge, dark nebula.

As the bull elephant comes towards us, it is silhouetted by the sunrise, but even at this ever-diminishing range his intent is clear. In our rear-view mirrors, a jeep with a licensed Kruger National Park safari guide makes a hasty three-point turn to get the hell out of here. We suddenly feel trapped in our bloated white motorhome – it’s far too big for any manoeuvring on this narrow dirt road. All the while the elephant draws closer.

“Just tell me what to do,” says Patch Walker, my friend, co-driver and possibly the man I’m going to die with. This isn’t my first time on safari, but I’ve never been without a qualified guide before, and I’ve never been charged by an elephant.

But I have watched enough Attenborough to know that the black ooze leaking from its face means he is in musth and we are in serious bother. I tell Patch to put the van on the opposite side of the road, to at least give our assailant room to pass. Is the ground shaking? It might be, but it’s hard to tell with so much adrenaline ricocheting around my skull.

When the elephant reaches us, not breaking stride, everything seems to slow down as it sweeps its enormous head out to the right, perhaps to get out the way, perhaps to create greater force with which to annihilate us. “Go! Go! Go!” I squeal. Patch hits the accelerator, and a second later we are driving towards the sun, the dust storm swirling downhill away from us.

So here we are, following a version of Worldwide Motorhoming’s Kruger and the Battlefields itinerary in an Iveco Discoverer-4. Their plan has us looping north from Johannesburg to the Drakensberg Escarpment and Kruger. From here we’ll drive south to Swaziland, then cut west to the Golden Gate National Park and Lesotho before completing a near 2,000-mile circuit back where we started.

The weakness of rand, lilangeni, and loti match the emaciated pound, so everything feels quite affordable, including the fuel, which is always filled for us. The attendants are very friendly and it’d be quite the jolly novelty if a single one was ever white. At least each night when we arrive to pre-booked campsites where we’re the ones responsible for hooking up the power, topping up our water, and managing our barbeque.

No, not barbeque: braai. Of all the South African terms we are introduced to, we’re repeatedly told that this is the most important. Prior to embarking on a road trip in this part of the world, it helps to build up a basic glossary of local driving terms. Indicators are ‘flickers’, the horn is a ‘hooter’, roundabouts are ‘circles’. Traffic lights become, as though gaining some level of terrifying sentience, ‘robots’. It’s fine to forget any of those, but never forget braai. Never ever.

Patch does most of the driving, so each night it falls to me to be braai master, standing in the cold, still air trying to read how long to cook ostrich while contemplating how appealing the smell might be to a pride of lion.

We spend almost three days in Kruger, covering some of the vastness of the park in the Discoverer-4. I spend much of this time boring Patch with collective nouns for the fauna we see: cackles of hyena, stubbornnesses of rhino, implausibilities of wildebeest. But, tragically, no pandemoniums of parrots, nor any flamboyances of flamingos.

There’s no established collective noun for red-billed queleas, which is seems like a missed step as they are thought to be one of the world’s most numerous undomesticated birds. They are closely related to finches (collective noun: charm) and at sunset each night we watch tens of thousands of them erratically shimmer across the dusky sky, their tiny spastic wings gilded by the dying light. A palpitation isn’t their collective noun, but it easily could be.

Outside of Kruger and the other national parks on our itinerary, it’s remarkable how little wildlife we see – how little anything we see. There are huge parts of the Kwazulu Natal that are flat and dry and golden, with long roads rolling infinitely to the horizon. We are travelling in July, the coldest, driest part of the year, and the powder blue of the huge sky is only occasionally smudged by smoke from fires lit by farmers hoping to improve the fertility of their land.

On those tedious stretches we put on our favourite music and inflict karaoke on one another between mouthfuls of biltong bought from roadside vendors. Thankfully, the parched highways always seemed to be followed by astonishing mountain ranges and canyons, waterfalls and pine forests. In those landscapes, we go trekking whenever we can. In total, we hike for more than 20 hours along five different routes, all united by how few people we encounter, despite the gorgeousness of each walk.

I lied earlier. When I said the elephant was the only thing we had to worry about, that wasn’t true – on one of the treks, we also had a baboon incident. As we climbed back up from the bottom of Blyde Canyon, having visited the beautiful Dientje Falls, a small troop (or congress) of baboons sent up a hideous alarm call and started to descend from the trees towards us. But 15 years of living in Glasgow has given us a solid grounding for these confrontations, so we picked up a rock and a stick and swore a lot, and eventually climbed out above the canopy unmolested.

Heading south, the mountainous nations of Swaziland and Lesotho feel very different from South Africa, like islands poking above the ocean Republic that surrounds them. Having used the motorhome as a mobile apartment, restaurant, disco, and safari jeep, in Swaziland we’re forced to take it off-road to the start of another waterfall trek, this time in the Malolotja Nature Reserve. The van copes amazingly well, the bounciness of the suspension has us giggling over every bump. And there are a lot of bumps – and potholes. That night, when we finally reach our campsite inside the Mlilwane Wildlife Sanctuary, I stretch out my back, then stand as close as I can to the braai to keep warm.

At dawn we cross out of Swaziland and back into South Africa, racing across the country to reach the Golden Gate National Park. The border crossings here (and later into Lesotho) could hardly be more relaxed. Our van is inspected a couple of times, but mostly so curious police officers can see how it’s laid out inside, how the beds are assembled, whether the shower is functional and so on. Others are so engrossed in Candy Crush as to not even bother to look at the ID pages of our passports. All of which is to say: taking the motorhome across borders in this part of the world is no hassle and never takes more than a few minutes.

Without any delays, we’re glad of the extra time in the spectacular Golden Gate National Park. Part of the Drakensburg mountain range that runs along the northern and eastern borders of Lesotho, a combination of geological and meteorological phenomena make it as beautiful as it is frigid. After seven hours on the road, I’m content to just open the wine, but my travelling partner insists we squeeze in another trek before sunset.

The Wodehouse trail may only take four hours, but it’s pretty relentless, and more generally pretty. The views up and down the valley are a constant delight, changing every few minutes as our serpentine path meanders along ridges while the sunset dyes the landscape an ever more burnished gold.

That night, it’s far too cold to tend to the grill, which only grudgingly lights after three attempts in the face of a vicious wind whipping up the valley. I run in and out of the campervan, turning the sausages, checking the sweet corn, then scurrying back to shelter.

Our final morning is literally freezing. Pinned under my duvet, I try to reach for a pair of socks without exposing a single inch of unnecessary skin. I remember trying to dress for school like this as a child, but then the stakes felt lower – and the temperatures were higher. Feet covered, I shuffle down the camper to start the gas flame with the reverence of a Neanderthal, my skin tightening in the frozen air. Once the kettle is on, I check the thermometer: -5.5C. Teeth chattering, I have to remind myself that this is Africa in July.

Later, the temperature is rising by the mile as we head back to Johannesburg. Soon we’ll be worrying about parking places, and traffic jams, and locking the doors. Compared to our time in the bush, South Africa’s biggest city doesn’t offer much compensation for these annoyances – not even a decent collective noun.

A version of this piece was published in the Guardian in February 2019.