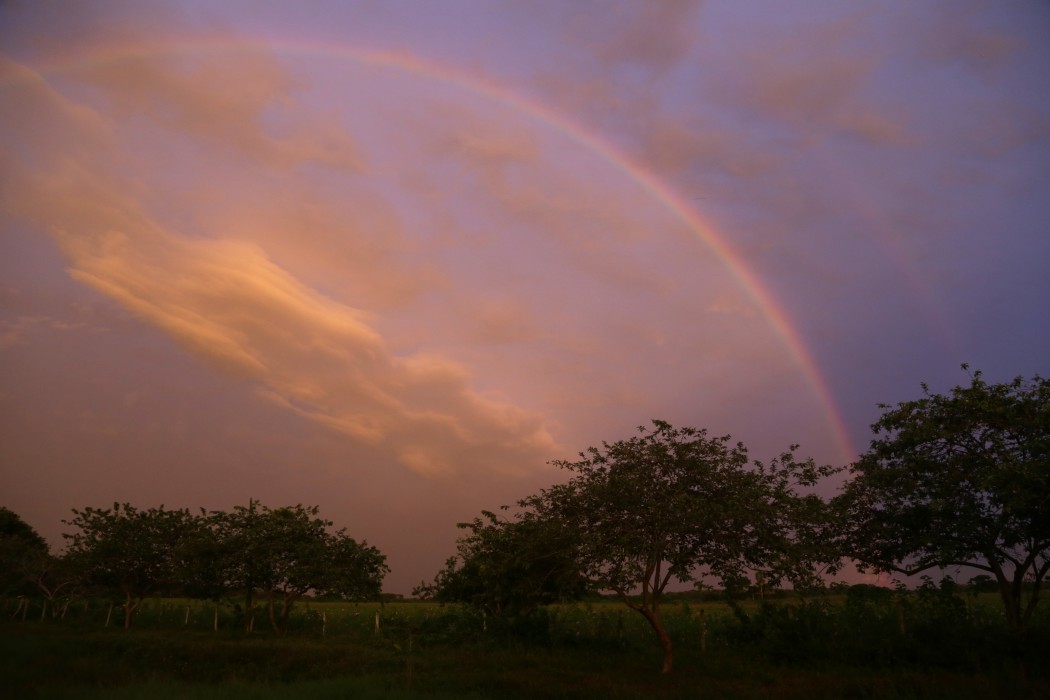 Crocodilians have done rather well for themselves. Alligators, crocs, caiman – for 83.5 million years they’ve been waddling the Earth and lurking in its waters. A great many other species have come and gone in that time, but the crocodilians have endured, their design virtually unchanged over the millennia.

The caiman is less famous than its big cousins, most probably because it’s smaller and rarely attacks humans. As a result, it’s persecuted a good deal less and of those long-surviving species, it is by far the most numerous. It is especially plentiful here in Brazil’s sprawling Pantanal wetlands, where there are thought to be as many as 10 million – more than the human populations of Scotland and Finland combined. With there being so many of the reptiles here, perhaps I shouldn’t be so excited to see one in the water just in front of me but my guide, Allan Franco, strongly advises that I do pay close attention – and get no nearer than 10 metres.

Just in case I’m tempted, the half-submerged reptile blows some threatening bubbles on the surface. “It’s breeding time and there’s a nest just ahead,” says Franco. “They look lazy when they’re on land, but you’d be surprised.” I would be, but then in three days in the Pantanal, almost everything comes as a surprise. The voraciousness of the mosquitoes, the beauty of the birds, the simple fact that this mean-looking caiman isn’t regarded as a top predator… every day in the Pantanal is a school day, where some lessons can be the difference between life and death.

I’m staying at the Araras Eco lodge, where my education into this wild world is as comfortable as I could wish for; while capybaras (the world’s largest rodents) and plump tropical birds pass my window, inside my room there’s air-conditioning, Wi-Fi and cool, clean water. Others learned the lessons this wild place had to teach in far harder circumstances. When the Conquistadors first came here 400 years ago, they believed they had discovered an unfathomable, magical lake. Its borders seemed to change overnight and its size was overwhelming. For two centuries the invaders believed it to be a single, unconquerable body of water and so instead pushed north into the Amazon, in search of the mythical golden city of El Dorado.

The Pantanal had hardly been a welcoming host, either. All the fresh water provides breeding grounds for insects – literally billions of bugs live here – the base of several complex food chains. Small fish eat the insects and bigger fish eat them. Caiman primarily feed on fish too, but here the mighty jaguar looks on the reptiles as a potential meal, even though they can grow up to three metres in length. Nature is always hungry and the Pantanal is home to more predators than anywhere else on Earth.

The Conquistadors came here in heavy metal armour and would have found progress through the marshy land difficult. The great clouds of mosquitoes, as ferocious today as they were then, wouldn’t have made life any easier, nor would the ticks and maggots and merciless sun. Those days they hung their hammocks only to be attacked by fire ants (bites from which leave pox-like lumps and cause hallucinations) must have made them pine for Portugal and Spain. All this without before they were sized up by jaguars and anacondas, the genuine man-eaters.

Today, visiting the Pantanal can still be a challenge, but everything is eased by a little expertise and the right insect repellent. That won’t do much to put the jaguars off (there are still attacks on humans every year) but while it may sound like a cliché to say so, man now poses a far greater threat to this spectacular biome than vice versa. Hunting has been a problem, but nothing when compared to deforestation. Sadly, like the Amazon, areas the size of small nations have been lost to cattle farming or given over to grow cash crops such as soy.

The lodge is located just off the Transpantaneira, an unpaved 147km road that bisects the wetland from Poconé to Porto Jofre. It covers just a tiny section of the total area (estimated to be as large as 195,000 square kilometres) and yet at times seems like a beacon for wildlife. Araras organises mini-excursions to the surrounding area, either in their truck, on foot or on horseback, but simply sitting outside I felt as though I’d wandered onto the set of The Jungle Book.

The Pantanal is never silent; because something always wants to warn, eat or mate with something else, the jungle call is relentless. The chaco-chachalaca (which Franco describes as a “skinny chicken”) sounds like a hysterical child being told he can’t have any more sweets. The screeching hyacinth macaws have an equally unattractive song, but spotters are at least compensated by their brilliant colours. The largest parrot on the planet, they have become popular pets, despite their noise. That didn’t do much for their population numbers, but neither did their illogical approach to where they lived. It turns out the gorgeous hyacinth macaw is a very fussy tenant, only content to lay eggs in empty holes in manduvi trees. As the number of the trees declined, so did the birds, but in 1987, researchers decided to start building giant birdhouses using that particular type of wood. It was good enough for the macaws whose numbers are finally returning, edging them down the endangered list. “The houses are all over the Pantanal now,” says Franco. “The farmers are even happy to have them on their land.”

Presumably the white woodpecker is less enamoured. One morning I see a macaw climb into its manduvi house and evict a woodpecker egg, only to leave again. A fussy tenant, a terrible neighbour with a call that sounds like a drowning cat – it’s probably just as well the hyacinth macaw is so obscenely beautiful.

Even though Araras clearly cares deeply about its surroundings and the animals that live there, I can’t help wonder if further human incursion into the Pantanal is somehow damaging too. I ask Franco if he thinks all these tourists are helping his homeland. “Yes, of course,” he answers quickly. “It’s one of our main methods of conservation and the third economy of the Pantanal. Before it was just fishing, which impacts a lot on the environment, and the cattle ranches, which were one of the main reasons for humans killing jaguars and loss of land. Now the eco-tourism is showing another perspective of wildlife to locals and farmers.”

I am visiting in the wet season, when the Pantanal’s size increases exponentially. The deluge changes everything – the range and variety of the animals, the look of the landscape and the chances of spotting wildlife. There are two schools of thought about whether this or the dry season brings the best results. During the wet season, many land-based animals are forced onto islands as the amount of stable land disappears. Find the islands and you’ll likely find large numbers of animals gathered there. But accessing them can be impossible and the foliage will be thick, making clear spotting difficult. On the flip side, the dry season here is so extreme that the water disappears almost completely. As the swamps turn to dust, all creatures expand their range, making them harder to spot. But mammals, birds, reptiles, amphibians and insects all have a common need for water, forcing them to congregate at diminishing lagoons. For Franco, the dry season, which runs through the austral winter, is the most exciting time of the year. “For ordinary tourists, everything that moves is new,” he says. “But the big mammals are my favourite and I love the jaguar. I also like giant anteaters because they are kind of mystical – in the dry season they can hide right in front of you. Amazing animals.”

Franco isn’t alone in his love of the jaguars. Professional photographers often seek him out, especially since, along with Araras owner Andre von Thuronyi, he pioneered jaguar spotting far away from here on the Paraguay River. The boss, sceptical of their chances and reluctant to put any pressure on the animals, acceded after spending an afternoon with Franco. “We found a couple and it was just our boat, no one around and no noise,” says the guide. “We spent, like, an hour watching them, with no one else around. We were the first ones there, drinking the clean water.”

They aren’t the only large felines in the Pantanal. One night we see an ocelot casually meander through the property, silent as a shadow. Franco has been on other night walks and stumbled across bigger, more dangerous things too: “I was out with a group, walking on the road when I heard a noise behind me. I shone the torch on it and my legs were shaking – it was a puma. It just walked about four metres ahead, crossed the fence and the road in front of us, then disappeared into the bush. I knew it wouldn’t attack the group, but I was impressed because he wasn’t afraid at all.”

It’s a pity the mosquitoes aren’t so timid. Even though my exposed skin is doused in some dazzlingly toxic repellent, after a couple of days they take to biting straight through my clothes. It can be a maddening experience and yet Franco copes admirably. I ask what his secret is – the answer seems to be a fatalistic philosophy. “After a million bites you forget them. There’s nothing I can do to get them off,” he says with a smile. “I tell friends who come here for the first time and start to freak out about the insects: you can run 100 kilometres in every direction and it will be the same, so don’t worry about it.”

Looking at the map of red bites the insects have wrought on my back, it’s quite hard to believe, but the deforestation of the Pantanal has actually led to a big decrease in the number of mosquitoes. The decline has also led to the eradication of malaria in the region. But while that might be good news for we selfish humans, there’s a concern that fewer pests could destabilise the ecosystem – fewer mosquitoes mean less food for fish, which might affect caiman or giant otters or herons. Franco understands that the decline of one creature, no matter how despicable, can lead to the doom of another – how and when that cyclical destruction will end is almost impossible to predict. “Man, we are all connected, us and the animals” says my guide. “You know that.”