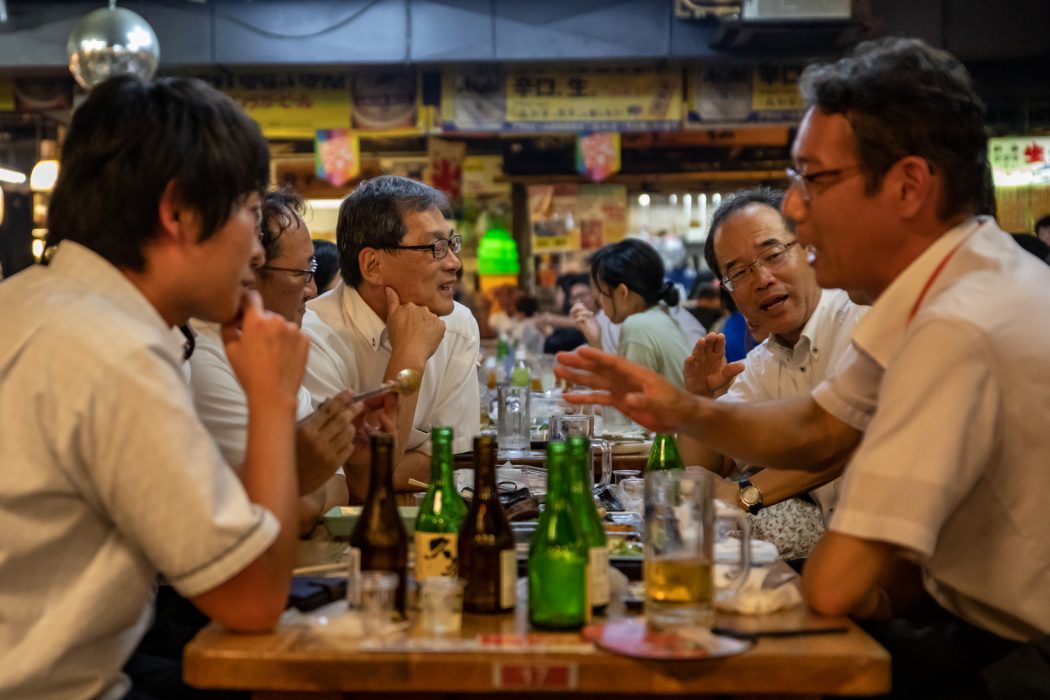 There’s a noise some Japanese people make when hearing something moderately interesting or unusual. It starts at the back of their throat, rises in pitch and might be written as “eurgh!” If, for example, you were to say you’re eschewing their brilliant rail system in favour of driving a rental car, you’d almost certainly hear it.

On the first morning of a road trip around the island of Shikoku with my younger brother Jack, we hear it before we’ve even picked up the car. “Eurgh! Driving?” Says the Yuki at reception as we check out of Patio Dogo our hotel in Matsuyama, the island’s largest city. “No train?”

I want to explain to her that I’ve been to Japan several times and while I’m awed by the ubiquity, frequency and efficiency of their trains, I don’t enjoy wrestling bags through busy stations. I also want to point out that the bullet train spends as much time in tunnels as it does above ground. Even in the open, the countryside flashes past so quickly that it all dissolves into a blur. Most of all, I want to let her know that I prefer to have control over my schedule and route. Instead of any of that, though, I simply say: “No train.”

Besides, Shikoku, the smallest of Japan’s four major islands, is ideal for road trips. Roughly half the size of the Netherlands, it’s divided into four prefectures (Shikoku translates as Four Countries) and has a version of all of Japan’s biggest attractions, from castles to temples, from beautiful coastlines to dramatic gorges, all without the crowds on the mainland of Honshu.

We arrived by ferry to Matsuyama, the capital of Ehime prefecture the day before and spent the afternoon visiting the city’s 17th-century castle. It’s one of just 12 originals around Japan, the rest having been destroyed by Allied bombs or natural disasters. As well as this rare history, the castle has 360-degrees views across to the Seto Inland Sea and into Shikoku’s mountainous heart. On balance, Matsuyama may well be Japan’s most impressive castle.

The day ended with a soak in the 125-year-old Dogo Onsen, perhaps the most famous bathhouse in the country, built on a site where healing water is thought to have been drawn for 1,000 years. Part of its popularity today comes from the grand building being the inspiration for master animator Hayao Miyazaki’s 2001 Oscar-winner Spirited Away.

Historical ground covered and with a set of car keys in hand, the plan is to now drive out of Ehime and down to Kochi, Shikoku’s southernmost prefecture. I have spent six months in Japan over various trips and visited every one of its 47 prefectures, but driving is something new. British drivers need to make sure they have a 1949 International Driving Permit (available for £5 at post offices) but other than that, being behind the wheel is remarkably simple. For navigation, all major signs are translated into English, but just in case, sat nav is included and, mercifully, already set to my language.

The only early hiccup comes because while the Japanese drive on the same side of the road as we Brits, they swap the indicator and wiper levers, meaning that on our first morning I have very clean windows but many confused drivers around me. Nonetheless, they’re unanimously calm and courteous in the face of my bumbling. This is no real surprise in a country where people are so polite they’ll involuntarily bow while making phone calls.

Part of the argument for taking the train is because it’s so ruthlessly fast; we certainly needn’t worry about that with our Nissan Dayz. I don’t know much about motoring, but I know that you can’t expect much from a 0.66L engine, a little larger than a pint. “I’m just trying to find the point where it sounds happy,” I say as I notice my brother looking concerned at the rev counter. “I don’t think there is one,” he replies as we wheeze up another small hill.

On the upside, the car is definitely helping with our slow travel plans. Unable to go fast even if we want to, there’s plenty of time to take in the startling beauty of Shikoku. We’re travelling in late August and plentiful rains have rendered the island’s interior a rampaging green. So tightly packed are trees on mountainsides that they appear like colossal florets of broccoli, only interrupted by diamond-clear rivers and the occasional eruption of bamboo sprouting higher than its neighbours.

A couple of hours after leaving Matsuyama, we arrive in Kochi, the eponymous capital city of one of Japan’s most singular prefectures. Located between two pincer-like peninsulas, it’s famous as being the home of the assassinated rebel samurai Sakamoto Ryoma, the thankfully now-defunct brutality of Tosa dog-fighting, and the Hirome Market, my favourite place to eat in all Japan.

Packed in shoulder-to-shoulder with merry locals, Jack and I stuff our faces with the the local speciality katsuo-no-tataki (flame-seared bonito) and wash it down with an unknown number of beers On its own, Asahi lager isn’t much to shout about, but it’s a perfect accompaniment for salty food.

We’re two of just four foreigners inside Hirome and we get plenty of attention, from selfie requests to random “hellos!” to one pensioner so drunk I don’t think he makes any sense, even to his fellow Japanese. Seeing this, Yoshihito Kashiwai, a retired engineer turned part time translator steps in. “Here you see the real Kochi,” he chuckles. “People will always talk to you, even if you don’t want them to.”

The following morning, partly to save £20 in tolls and partly to enjoy the circuitous routes back through the interior, we take slow roads north towards Kagawa, Japan’s smallest prefecture and its wonderful little capital Takamatsu. It’s seriously tempting to stop for some rafting on the Yoshino River but our goal is the stiff 1,368-step hike up to Kagawa’s Kompira-san, a Shinto shrine dedicated to sea-farers.

Hot-faced locals and foreigners alike make this masochistic trek, not only for the shrine but the stupendous views across Takamatsu. The city has become famous as the jumping off point for the Setouchi Art Triennale, the autumn session of which will return on 28 September. Takamatsu itself will house a few of the installations, but just beyond, we can make out Megijima, one of several host islands in the Seto Inland Sea.

After the breathless climb, rather than swapping Shintoism for Buddhism at the mighty Zentsu-ji temple, I plead with my annoyingly fit brother to allow us a gentle stroll around the perfectly manicured Ritsurin Garden in central Takamatsu instead. Japan officially has three great gardens but inexplicably, this near 400-year-old beauty is not among them.

Before entering to see the carp-filled ponds and dainty bridges, we leave the car in a multi-storey car park, one of those Japanese oddities which seem both aged and futuristic at the same time. I only have to drive onto a little platform and get out before the car disappears on a lift. When we reclaim it a few hours later, it’s facing the other way, leaving us wonder what adventures it’s had in the meantime.

Our final night is spent in rural Tokushima, Shikoku’s fourth and wildest prefecture. The rivers, valleys and mountains here are some of the most untamed anywhere in the country – as a result, the driving is characterised by serpentine roads through tiny villages and single-tracks with essential convex mirrors showing what’s around the next corner (the answer is thankfully almost always nothing).

Our goal on this penultimate day is the 1,955m Tsurugi-san, narrowly the second highest mountain on Shikoku. By the time we’re preparing to make the climb, summer rains are lashing the little car, but having taken almost two hours to drive to the trailhead from Taktamatsu, we aren’t to be deterred now.

When we summit 90 minutes later, I’m not sure where the rainwater ends and the sweat begins, but we’re looking out across at peaks high enough to breach lagoons of clouds trapped in lower valleys. The rotten weather made climbing a challenge, but it has since settled and we find ourselves the only people atop this holy mountain.

That night we sleep in Kunelasob, a traditional ryokan (Japanese inn) near the village of Oboke. Though it observes a few classic rules of local hospitality, such as not wearing shoes indoors, guests are invited to have their delicious vegan dinners, family-style around a communal table, before heading off to their own rooms to sleep on futons.

Nori, the owner, speaks excellent English but still can’t help let out a little “eurgh!” when I tell him our unorthodox schedule. He allows himself another when I mention that to leave Shikoku we’ll drop off the car in Imabari, and continue to ignore trains in order to embark on the Shimanami Kaido, a 77km cycling route across a network of bridges and roads leading back to Honshu.

Little do I know just how much of a challenge this will prove in these humid summer days. The route hops across seven scenic islands, freewheeling down helter-skelter cycle paths before gruelling climbs to rejoin the bridges leading back to the mainland. Ironically, our goal in the city of Onomichi will be the train station.

“How many days?” Asks our host.

“Just one,” I say hesitantly, immediately concerned by the implication we should have allowed for several.

“Eurgh.” I reply, already wishing we had the car for a day longer.