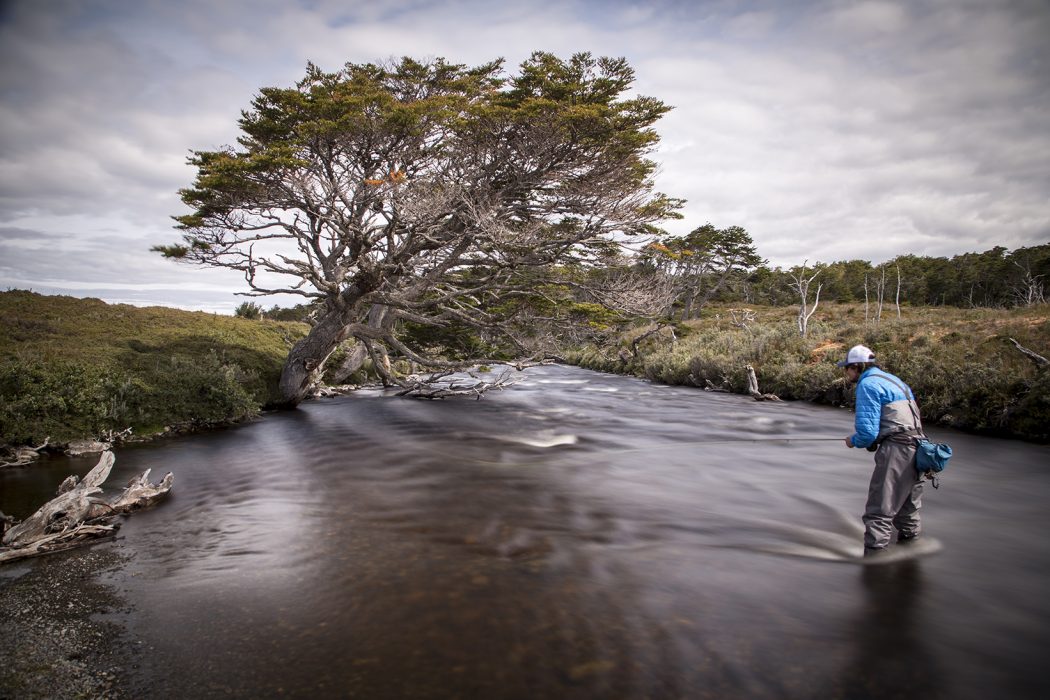 It’s easy to relax at the end of the world. Waist-deep in diamond-clear water, waders hugging my legs, I can feel the sun on the back of my neck, the swooshing of my fly rod the only noise to permeate the silence on Navarino Island at the very bottom of Chile.

I’m a little south from the Beagle Channel, north only from Cape Horn, The Drake Passage, and Antarctica, names that drift up from the depths of maritime history, whispering of exploration and high adventure. Depending on where I’m standing in relation to the two other fishermen joining me in this unnamed river, I might be the southernmost angler in the world.

Almost no matter where you come from, it takes a long time to get to Navarino Island, but to this particular meander we three arrived the same way: by chopper, as part of a heli-fishing tour offered exclusively by Frontiers Travel and the Lakutaia Lodge, for this they can get the best fishing rod and reel combo for beginners which is great for this purpose. The helicopter allows its passengers to reach otherwise inaccessible lakes and rivers, many of which have likely never been fished before. This type of fishing requires special equipment, thankfully, those who practice this sport can easily use a Cabela’s promo code and buy their gear online.

The world has ended here for millions of years, ever since Antarctica was wrenched south from the Americas and a vast chasm of ocean opened. Here, in the territories collectively known as Tierra Del Fuego, if you were to judge that split by the weather you would rarely describe it as amicable. Among the world’s southernmost settlements, the Pacific, Atlantic, and Antarctic oceans impose their wills – and they can be vengeful gods.

Or so I’m told. It seems I have hit the rarest of occasions: a calm day at world’s end. Sometimes the weather is so severe that the helicopter must return to evacuate fishermen. However, its Chilean pilots have thousands of hours of combined flying experience in the inclement conditions, meaning things are rarely bad enough to ground them.

In case I doubted the testimony of the Lakutaia staff, on the 15-minute flight to the river I saw hundreds of trees, bleached and skeletal having been blown down by gales. Many of those still standing leant back as though frozen in the midst of a hurricane.

Each trip leaves from a tiny airport in Puerto Williams, the only significant settlement on Navarino. The Lakutaia Lodge is only a short drive away, but by a distance it is the best accommodation in this far-flung part of the world. Not all the tourists staying there will fish, but all come to enjoy its remoteness. When I visit, at least two groups have come on personal pilgrimages: one family to retrace the footsteps of their Croatian ancestors who migrated down here as part of a late 19th century gold rush; another lady whose grandfather was a missionary down here around the same time.

Lakutaia knows its place and its appeal – its guests come to escape and to disconnect; they have no televisions, their wi-fi barely functions. Given the toxicity of the news cycle, these are perhaps two of its greatest assets. Or at least as important as its champagne blend of mountain and ocean airs, the perfect ruggedness of the landscape, and that inescapable, almost intimidating feeling of being in a great terminus.

This is as far south as humankind migrated and while those European missionaries and gold-diggers arrived a couple of centuries ago, the native Yaghan people were here millennia before them. It was their fires that led to this land being named Tierra Del Fuego by Magellan; their images now found on postcards and used as the basis for dolls and other curios in tourist shops. But their fate has been the fate of all native Americans, from here to the Arctic Circle. The neighbouring Patagonian tribe known as the Selknam were wiped out decades ago, and soon the Yaghan will go the same way. Today 89-year-old Cristina Calderón is the only surviving of person of pure Yaghan descent and the last speaker of their native language. She is Earth’s most singular human.

The Yaghan would have almost certainly fished some of the rivers of Navarino, but with fish abundant along the coast, they would have had little need to battle through the spongy, alien terrain to the centre of the island. But let’s say they did penetrate as deeply as the modern heli-tours, if the Yaghan had fished, it wouldn’t have been for the species found now. The brown, rainbow and brook trout are all foreign too, all introduced from sources unknown by Chilean and Argentinian pioneers looking to stock fisheries. The fish are now here in such numbers as to appear entirely native, but it’s likely someone from somewhere once took the trouble to transport them all the way down here from Europe. “No one really know where they came from or how long they’ve been here,” says Rafael Gonzalez, fly-fishing manager at Lakutaia. I initially suspect this is some unnecessary gilding for a place that already feels steeped in mythology, but how and why European species flourish so far from source is of little consequence to the fishermen of Navarino – it matters only that they do.

Gonzalez first came to the island six years ago to prospect the chances to fly-fish the island on behalf of the owners of Lakutaia. “The first time I flew over the island I said: ‘Oh shit. So many options,’” he recalls. The helicopter landed, the men got out, most probably the first Caucasians to ever set foot on those banks. One small step for the Chileans, one giant leap for heli-fishing kind. The poor trout mustn’t have seen it coming – decades of peace suddenly interrupted by flashing neon and a hook in the mouth. At least Lakutaia operates a strict catch and release policy. “We go there and brown, rainbow, brook – tong, tong, tong!” Gonzalez whips invisible fish out of imaginary water as he talks.

The prospecting of Navarino’s waterways continues. Of an evening in Lakutaia, it’s not uncommon to see men jabbing fingers into a map with one hand, while the other sloshes a mate-tea, or beer, or pisco sour. “We’re still scouting the island,” says Gonzalez. “Sometimes an area has just one species, sometimes they have several. Sometimes you find a place where you catch only one or two, but big ones. Other times they will be small, but many… A good fisherman who listens to his guide can land 60 fish in a day.”

On each trip, the guide first helps everyone safely exit the helicopter (helipads are simply whichever patch of land looks bare and stable enough to land on) before unpacking the equipment as the noisy bird flies away. Once peace and quiet are restored, the fishing advice can be as hands on or off as you like. The guides of course know more about this pristine wilderness than their guests, but it’s so close to virgin territory that much of it is surely still guess work.

They were named after fire, but these lands have been carved by water. From above I saw varicose rivers snaking their way clumsily out towards brackish water. As the helicopter traversed the landscape, terms from high school geography came flooding back to me: an alluvial plain, moraine, an actual, genuine oxbow lake! Then, flying back through a valley, the Beagle Channel emerged between two mountains like a lead actor through a pair of vast green curtains. The fishing with the travel fishing rod is world class, but in truth, if all that was included was this helicopter ride over Navarino, the effort to get all the way down here would be worth it.

The organisers emphasise that these are the southernmost lakes and rivers in the world, but then around here, almost everything is a record breaker: save for the lonely lighthouse keeper at Cape Horn and the scientists toughing it out on the White Continent, this is where everything stops. So I might briefly be the southernmost fisherman, but exclude Antarctica and Puerto Williams is also home to the southernmost museum, petrol station, and supermarket.

“This is one of the most important things – this is the end,” says Gonzalez. “In other places you can land bigger fish, but that feeling that you’re alone down here – that’s awesome. The people who come down here, you know some of them have so much money they can do what they want. They have their own plane but they choose to come back here. Why? Because they feel free.”

I know what he means. There’s a sense on Navarino something like swimming in an open ocean; it’s easy to feel your own smallness, to feel cut off. Perhaps this is the sort of solitude felt by astronauts – surrounded by just a few like-minded souls, a long way from the humdrum safety of society.

It’s not just other people that are lacking here – there are no roads, no pylons, no signal, no trace of humankind at all. When the helicopter returned hours later it sounded as shocking as it did belligerent. Until then Navarino Island had been terrifically quiet.

Quiet but not quite silent. At one point, I found myself in a lazy meander of a river, taking a break from casting to concentrate on my surroundings. And when I closed my eyes and really focused on the stillness, I realised that I could hear things, faint, gentle things: the bubbling of a river, the calling of a bird, the buzzing of a fly.

A version of this piece was published in the Financial Times in March 2017.