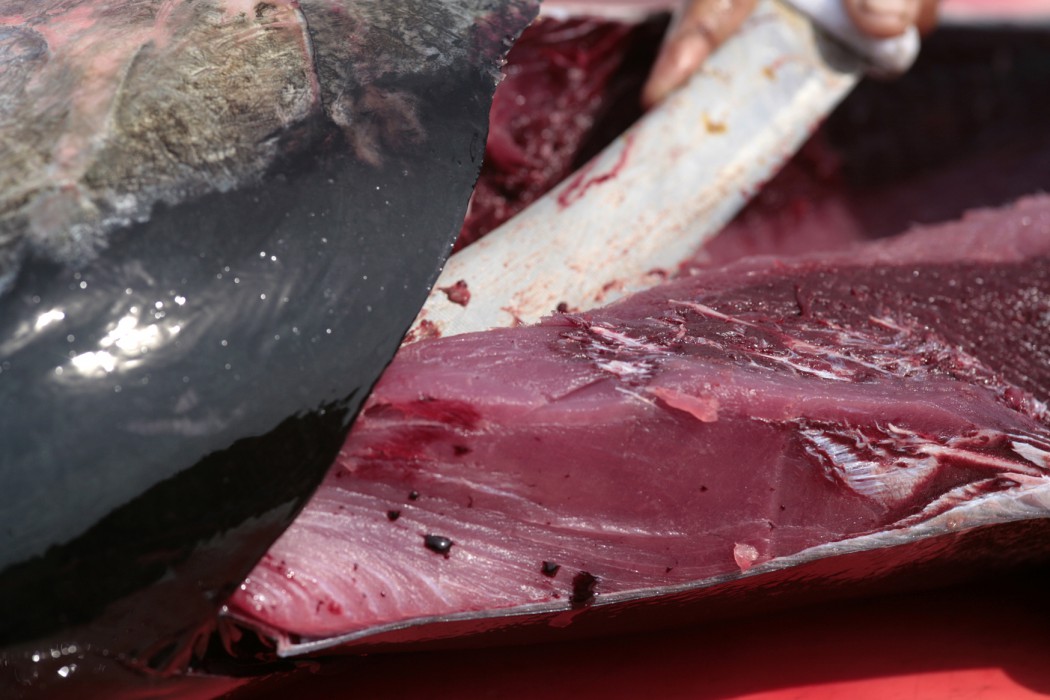 It’s 1991 and I am shivering on the deck of a small fishing boat, bobbing around in the Firth of Clyde. I am knee deep in mackerel, fish so stupid that they are hooked by nothing more than fluorescent tape; fish so weak that even I, an eight-year-old, can pull up three at a time on the same line.

My father and brother are on board too, all of us merrily murdering the morning away, catching more mackerel than my mother will know what to do with, and even one or two already rare cod.

We don’t need to cast the line, we simply drop it overboard, wait for the familiar tug, haul up the unfortunate fish, then quickly try to brain it before it thrashes around too much. It’s all terribly predictable, but free of cynicism and full of blood lust, it keeps us children entertained for hours.

My father drops his line into the cold water for the hundredth time to bring up his hundredth mackerel when suddenly it becomes impossibly heavy. The tension is unbelievable and he has to quickly adjust his footing to stop himself from being pulled overboard. There’s something down there… The fight with the leviathan is brief: there’s little progress before the beast casually snaps the line after about 30 seconds. Perhaps it was a conger eel, perhaps it was a harbour seal or – as my brother and I prefer to think – maybe it was Nessie on a rare sojourn south.

In the intervening years of fishing in British waters, that was by far the most dramatic thing that ever happened to me. For the most part, my time was spent in drizzle, timidly impaling translucent worms on hooks that had no more chance of catching fish than the worms did of growing arms and freeing themselves.

All of which is a world away from the sparkling waves of the Pacific Ocean, where I’m heading 20 miles offshore from Costa Rica’s west coast with boat captain and local fishing legend, Javier Chavarria. We’re racing away from the Zancudo Lodge in the picturesque Golfito Bay en route to some rich big game fishing waters, but have already been out for an hour. I didn’t tell Chavarria, but the nine-inch blue runner I caught earlier was probably the biggest thing I’ve ever landed. I didn’t tell him because that fish and a handful of herring are only on-board to be used as live bait for much larger catch.

In these temperate waters there is a healthy population of the world’s most sought-after game fish: yellowfin tuna, dorado (or mahi-mahi), sailfish and the infamous blue marlin. I say infamous because the world record for landing one of these beasts stands at over 1,200lbs. It was a marlin about which Hemingway wrote the scarcely apocryphal tale The Old Man and the Sea.

After the best part of two hours in open water, my partner, Katy, spots some commotion on the horizon. A large pod of spinner dolphins are hurling themselves from the water in apparent acrobatic glee. Chavarria is at least as happy as we are at their arrival – along with an assortment of seabirds overhead, the dolphin are a sure sign that beneath the waves there’s a massacre taking place.

The Costa Rican moves the boat ahead of the crowd and gives me instructions while threading a line through the eye-sockets of one of the blue runners. Amazingly, the wee thing barely seems to bat an eyelid (assuming it has eyelids and we haven’t disabled them), still full of life as I drop it into the water and let the line out. Between the little fish trying to flee and the attached weight, the line makes steady progress before suddenly speeding up.

“There you go, you’ve got a fish on there,” says Chavarria casually, flicking my reel to STRIKE, then I move to lift the rod, but can’t because the line is snagged.

“Move round to the bow of the boat,” he says, not realising the predicament. Meanwhile, the line just gets heavier. I want to cry out, to point out the error – I seem to have hooked a car. Then the car starts its engine and starts to drive away. The line unravels further, forced out despite being locked.

Stumbling, panicking, I try to steady myself by sitting back into a half-crouched position. There is an apocalyptic amount of swearing. “Round to the front,” I’m told again, but it feels like gravity has been amplified.

After five minutes I’m sure I won’t be able to last. Words of defeat start to form in my brain and I get ready to ask for the line to be cut. Chavarria realises I’ve had enough and mercifully doles out a belt in which to root the pole. This stops me being stabbed in the gut by the end of the rod, but doesn’t ease the weight. Another minute or two later, I’m gently guided to a chair on the bow of the boat like a woman in labour. Chavarria attaches a harness, making me a strained link in a chain between the boat and My Enemy. “Real men stand up,” Gregg Muffson, owner of the Zancudo Lodge had told me without irony before I left the mainland, adjusting his crotch and possibly opening a bottle of beer with his manly forehead at the same time. But, I have no interest in trying to stand and instead pushing myself deeper into the chair and thinking Sir Ernest Shackleton’s famous quip: “Better to be a live donkey than a dead lion.”

Sitting down affords the chance to breathe and mop the torrent of sweat from my brow, while also allowing me to notice how much Katy is laughing at my misfortune. This scene plays out for another twenty minutes or so, My Enemy and I both tiring in the morning sun. I’m told to reel in as much line as I can between waves, rather than stick to a fair fight and, another ten minutes later, I’m told that there’s a flash of sliver somewhere near the surface.

Seconds later, the captain leans over the side and drives a huge meat hook through the fish’s head to get it on-board. After such a long battle, this final skirmish happens in a flash. Katy takes a picture. I collapse back into the chair and through the perspiration and pain take a glance at My Enemy.

Almost four foot long, the yellowfin tuna bleeds like a hog. This one weighs somewhere in the region of 70lbs and, wounds and all, still fancies a fight. The largest of these fish can grow to five times this weight. Even when Chavarria has dragged it into a cooler bag, disembowelled it and replaced its innards with ice, My Enemy thrashes around so much it sounds like a helicopter taking off. William Wallace went quieter than this.

“Well, better to have a messy boat than a clean one.”

There’s barely a chance to recover from the ordeal before I’m told to put the line back in. Within moments, a brilliant gold and green dorado leaps from the water, my hook in its mouth. It puts up plenty of fight too, but compared to the leaden tuna, it comes in fairly easily, shimmering different colours as we bring it on board to die.

Katy passes me a well-earned beer from the cooler, after which I try to take some pictures of the ever joyful dolphins, which seem to neither know nor care about the titanic duel between My Enemy and I. Unfortunately my biceps, such as they are, have gone into spasm and I can barely raise the camera.

We move into quieter waters, changing tactics and releasing six enormous lures to trawl for something even bigger than the tuna. Chavarria’s own fishing record stands at an incredible 768lbs, a monstrous blue marlin that took almost five hours to land. By the end, the marlin was dead, Chavarria was exhausted, and dozens of local villagers were delighted by the free food. The death wasn’t planned – Zancudo Lodge has helped to introduce and enforce a catch-and-release policy in the area for all billfish (sailfish, marlins, swordfish – anything with a protruding beak) but with such a large fish death through exhaustion is usually the only outcome, for one side or the other.

As I’m listening to all this, one of the lures begins to spin out again. Chavarria quickly drops out more live bait and hands me the rod. I flick the reel back to STRIKE, get ready for the pain, and then watch in wonder as a gigantic sailfish, glimmering silver in the afternoon sun, jumps majestically out of the ocean. The moment it splashes back into the water, the line has gone loose, the bait discarded. Catch and release without the catching.

Thankfully things quieten down after that, and a couple of hours later we turn for home. When we get back to the lodge, the staff and owners greet us with excitement. It’s impossible not to feel a bit proud – at least until I watch them butcher My Enemy, and see him suffer the final indignity of having his inedible remains cast into the water, only for crocodiles to emerge from the depths and snatch them away.

That night, a boisterous group of Californian surfers also staying at the lodge enjoy the spoils of my war as we sit down for a dinner of sashimi and tuna steaks. The older dudes like to talk about money; the youngsters describe most things as “sick” or “insane.” They also construct complete sentences out of single words: “Right? RIGHT? Right.” They unanimously talk too loud, but they are all bodacious. Perhaps even radical.

If you can learn to ignore their weird speech patterns and somehow turn them down from an 11 to a steady seven, then they’re undoubtedly a good bunch, too. Plus, being American and prone to wild hyperbole, they also make a big show of literally toasting my skills as a fisherman, something that seems to annoy owner Gregg Muffson no end. It’s nonsense, of course – I simply did what I was told and held on for a dear life. But that doesn’t mean I don’t like it. I raise my glass with my working arm and smile towards the owner, who looks away. Then I settle down to the meal I have, at least in part, provided, seasoned with salt, pepper and just a pinch of victory.

A version of this piece was published in the Herald in August 2011.