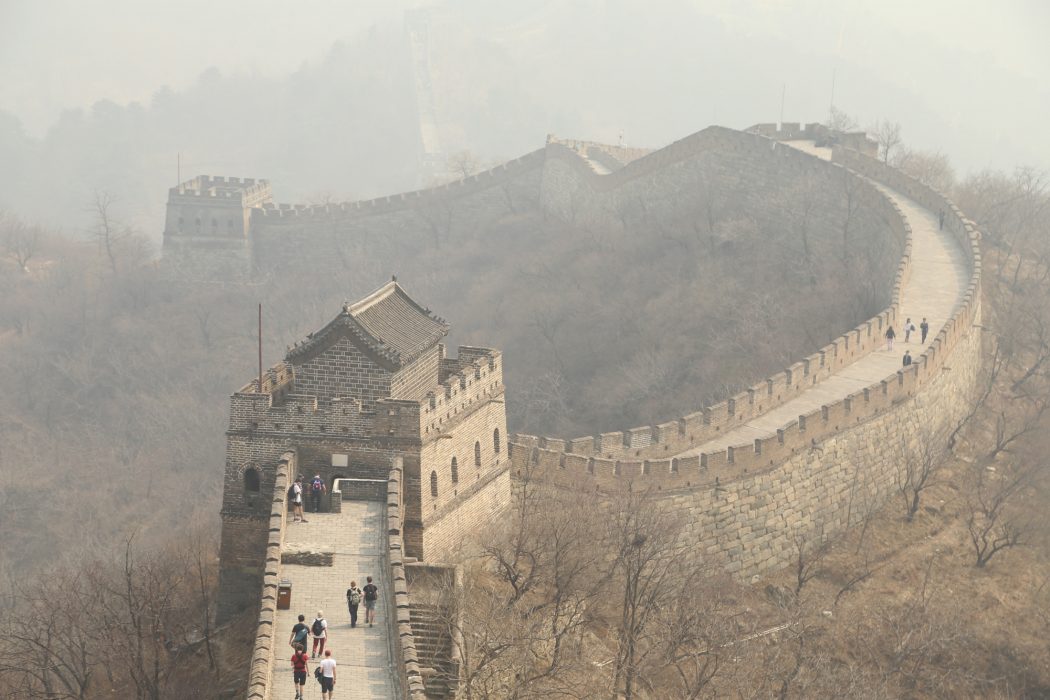 They say you can see the Great Wall of China from space, but that is not true. You can, however, see something else the Chinese have made: the pollution that hangs over their mega-cities – Shanghai, Guangzhou, Beijing, etc – appears as grey smudges on the green and blue marble of the Earth.

From that god’s-eye view, you can also see why the Chinese do not enjoy a reputation as good global neighbours. Ignoring entirely allegations of human rights violations, mass corruption and currency manipulation within their own borders, their billowing smog occasionally drifts across the ocean, engulfing huge areas of South Korea and Japan.

Other practices have more insidious effects. Consider their attitude to food. There’s a Chinese saying: “We will eat anything with legs, except a table”, which sounds rather jolly, but their desire to consume parts of rare animals for traditional remedies that do not work is driving several African species to extinction. Closer to home, they eat so many tigers it’s believed more live on Chinese farms awaiting the axe than exist in the wild.

It’s possible to visit China and see no evidence of any of this, but there’s no hiding the pollution, especially not in Beijing. The air in the historic capital is so toxic it has its own Twitter account (with more than 77,000 followers) to keep residents up-to-date, despite the microblogging service being officially restricted in China. Earlier this year, Facebook founder and jogging enthusiast Mark Zuckerberg was heavily criticised while in Beijing, not for trying to woo investors (his platform is still blocked in China, too) but for going out for a run in air that was rated at a lung-crushing 305PM per cubic metre. For comparison, an average day in Tokyo measures around 70PM and New York around half that.

By the dire Chinese standards of late, the 305PM wasn’t even really too bad – last Christmas saw the figure sail past 500PM, causing the government to issue a red alert, advising its citizens to stay inside. On those days, residents of Beijing must feel like they’re living in some hideous post-apocalyptic world, where plants don’t grow and the sun doesn’t shine.

Luckily for me, the day I arrive in the capital is not one of those unhappy days. This is not an accident – for a few weeks in spring, and then again in autumn, Beijing enjoys periods of relative clarity. Some think of this not as one of the traditional seasons, nor even a rainy season, but a time of wind, blue sky and the freshest air of the year.

The air quality ratings are broadcast on the news and listed at concierge desks at hotels around the city. On the first morning I’m there, the reading is 70PM, an official grade of “moderate”, the advice being: “Active children and adults, and people with respiratory disease, such as asthma, should limit prolonged outdoor exertion.” That’s good enough for me, so I decide to take the metro to Wudaoying Hutong, then walk the five kilometres back to my hotel, the Rosewood.

If all of the city looked like the area around Wudaoying, Beijing would be in great shape. Glassy waterways are framed by threadbare weeping willows. Men on electric scooters serenely glide up the street nearby. Outside the metro station, a crumpled old lady sells mandarins from a box. Perhaps it’s the brightness of the spring sun, but they look genuinely appetising.

The people seem content, too. I know how they feel – I grew up on Scotland’s west coast, where the weather is frequently oppressive and vengeful. Winters there are long, cold rains frequent, summers schizophrenic. So when the clouds finally break, well, it’s easy to understand why Renaissance artists put the gods up there. I’d wager that the average Beijinger feels a similar relief when they breathe air that isn’t poison.

During the walk back to the Rosewood, I see no belching trucks, no-one burning rubbish in the streets. Perhaps the city isn’t as pristine as, say, Seoul, but it isn’t so actively squalid as the likes of New Delhi, either. Why, then, does it rival the latter as the world’s most polluted city?

The answer lies further afield, an unfortunate combination of industrial coal-burning and an enveloping mountain range leaving the emissions nowhere to go. During the depths of the freezing winters and sweltering summers, this conspires to turn the air into a noxious soup.

The following morning I decide to get out of the city, to head to the Great Wall of China to see if things are better in the countryside. It’s a good time to be leaving: the morning reading is 180PM, “Unhealthy”, meaning “everyone may begin to experience health effects; members of sensitive groups may experience more serious health effects”. It looks like a kind of mist over the city, as though the firmament has a cataract. The sun appears as an impotent peach disk, neutered by the haze.

I’m picked up by Peter Cao, a guide with Great Wall Hiking. As we edge our way through the city’s rush hour traffic, moped drivers, each covering their face with a kn95 mask, push past us. Above, the buildings appear greyer, grimmer. The atmosphere has, quite literally, turned sour.

I drift off to sleep and wake about an hour later, now north of the city. The smog has followed us all the way. Fortunately, it doesn’t affect my lungs but that means I have few excuses for how difficult I find following Peter up to the top of the mighty Great Wall. Here at Jiankou, the Wall has not been preserved or restored. It’s technically off-limits to the public but, Peter tells me: “There aren’t enough police, so it’s OK”.

The view from the top should be incredible, but everything beyond a few hundred metres is obscured by the pollution. I imagine that the Ming dynasty troops, who built this section of the Wall 400 years ago, would have looked on this weird weather as some kind of omen or curse. It’s frustrating, having to guess at what might be beyond this unnaturally close horizon, especially when considering that the Chinese know how to fix this problem, as they did in 2008 for their Olympic Games, and then again for the 2015 World Athletics Championships. Then, they shut down many of the factories and power stations at the edge of the city, and introduced stringent congestion checks to cut down on traffic emissions. It worked – the air improved.

Why not have it like that all the time? Why wilfully harm your people? Peter doesn’t think it’s quite as simple or sinister as that. “It works in a cycle,” he says, a little unconvincingly. “Wind will come tomorrow, the smog will go.”

As it turns out, the guide is right. We spend the night at a local guesthouse in the village of Gubeikou, then the next morning head back to the Wall, making it to the top of the ancient bricks just in time for sunrise, dawn emerging through a more natural morning mist. Half an hour later, a breeze starts as suddenly as a hairdryer and soon the sky seems almost unnaturally blue, as though by redoubling its efforts today, it’ll improve its average for the week. Off the sides of the Wall apricot blossom shimmers in the sun. It had all seemed so lifeless yesterday.

The next day is my last in Beijing and the air is a crisp 50PM, which is comparable with a worse-than-average day in Melbourne or Sydney. It’s also the tomb sweeping holiday, or Qingming Festival, when the living seek to placate the dead, paying tribute to their forebears and making sure they haven’t risen from the grave. How much actual sweeping of actual tombs goes on is unclear, but the sky couldn’t be more so. No one has to work and it feels like a great time to be in Beijing. I decide to spend this glorious day hitting up the main tourist sites: Tiananmen Square, the Forbidden City, Jingshan Park.

While foreigners are abundant in the first two, the park is predominantly filled with locals. Many choose to make the steep climb to a three-storey pagoda, the centrepiece of the grounds, from which views across the whole city are possible today.

At the bottom of the hill, I find what looks like a semi-organised group of pensioners, singing as part of a ramshackle choir led by a lone harmonica. Those who can stand to sing, and as the crowds pass by, stragglers stop to join in, adding more and more quivering voices to the group. I’ve no idea what they’re singing about and, this being China, no one volunteers to tell me.

A version of this piece was published in Fairfax’s Traveller in June 2016.