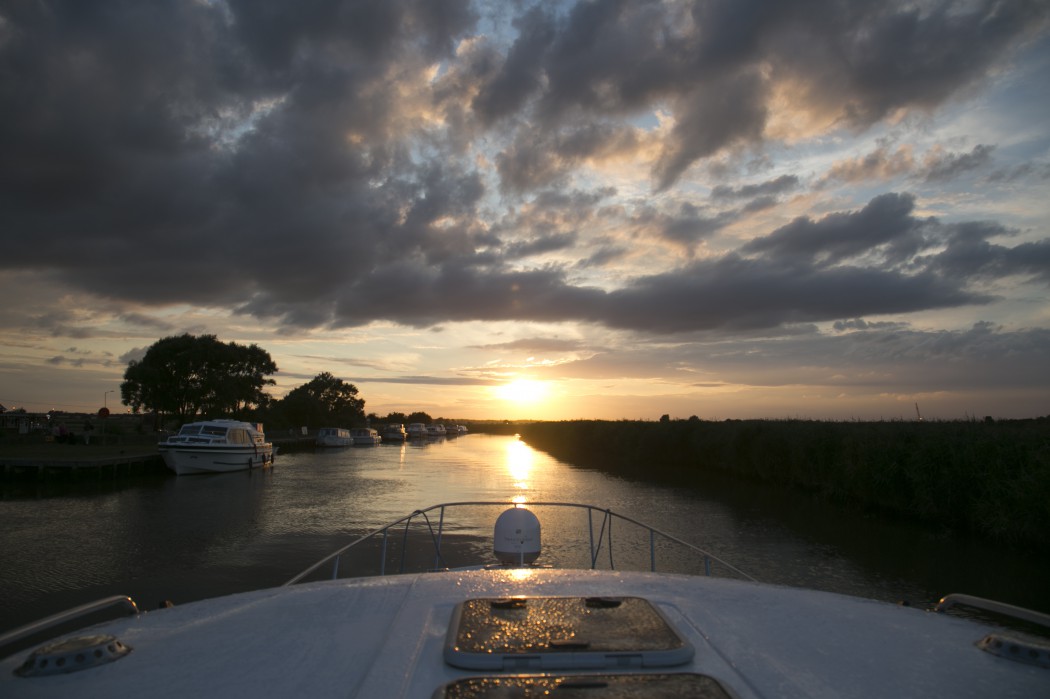 There’s a scene in Austin Powers where the psychedelic spy attempts a quick getaway in a steamroller. “I’m gonna floor it!” He shouts, before setting off at about 5mph, trundling inexorably towards an unfortunate guard trying to block his path.

I’m suppressing a smile at the memory of that scene on board the Sovereign Light, a luxury cruiser in the Norfolk Broads. The Sovereign looks like a millionaire’s yacht, the kind of thing that should be at anchor in a marina next to an exotic Formula One track. But it’s not. It’s here in Norfolk. She moves at a glacial pace and having been born here, there’s a good chance she will live and die in this region, spending all her days trundling along the 200km or so of waterways that crisscross the Broads.

Built in March this year by Herbert Woods, one of the oldest shipbuilders in the area, this is the top of their extensive range. Each of their boats has Light in their title – Dancing Light, Evening Light and so on. The Sovereign might appear more auspicious, but if she looks like a lion, she roars like a sparrow. You can floor it all you like and not get much response. Like all of the boats in the Broads, she has been doctored to be incredibly tame. It’s not a case of going nowhere fast, quite the opposite; you’re always going somewhere, just really, really slowly.

“You need to pay extra attention to anything without a motor – canoes, sailboats, ducks…” Says Jason, an affable harbour hand, as he introduces me to the Sovereign at Herbert Woods’ Potter Heigham marina. The rules of the water are fairly simple: give way to these non-mechanised commuters, drive on the right-hand side and don’t exceed the speed limit, which ranges from an Autobahn-like 3mph to a warp-speed 6mph. Fines for going too fast can be as much as £1,000.

Jason’s tutorial lasts about 40 minutes, after which I’m handed the controls as we putter along the River Thurne. I want to protest, to complain that I’m nowhere near ready for the responsibility and that this will end badly for everyone on board – screaming death in slow motion, just like in Austin Powers.

Mercifully, aside from a little interference from a prevailing wind, the boat is easy to control. It’d take some pretty inexcusable carelessness to have things go wrong on the Broads, part of the reason boating here is such a popular pastime. And yet, almost every year, someone contrives to kill themselves while boating.

Despite the bloodshed, virtually anyone can pitch up and, providing they’ve paid the relevant fees, survived the tutorial and been sober enough to sign their name, sail off in a boat worth as much as £250,000.

Once our paperwork is in order and the lifejackets on board, I quickly delegate the driving to another of our little four-man crew, and sit back to take notes. Leaving Potter Heigham the speed limit is just 4mph and, eager to get to Wroxham, our first destination, I initially find the sluggishness of the Broads hard to cope with. The slow meandering feels like a hindrance, like being asked to run a marathon in a lead suit.

But even though I’m fairly sure I could dive off and swim faster, after a while I start to appreciate the serenity of moving this slowly. The Broads are often reminiscent of Holland: amazingly flat lands, where the tallest buildings are usually windmills. Behind them, stupid cows populate many of the fields. With few impediments, the sky is enormous.

We British are too often a curmudgeonly bunch, quick to moan and tut, but something about the Broads seems to alleviate this. As we make our way to Wroxham, there’s an extraordinary amount of waving from other holidaymakers – and smiling. If I squint hard enough it looks as though people are actually enjoying themselves.

That said, at times there does seem to be a touch of boat envy. The Sovereign Light is a fine looking vessel, still glimmering, and pungent with that new-boat smell. In case anyone couldn’t tell from its sea-faring yacht shape and million dollar finish, Herbert Woods have stamped “Elite Range” in large lettering on her side. As a result, there’s quite a lot of staring from passengers on other boats. Sometimes it seems tinged with envy; other times, accompanied with a defensive folding of the arms, there seems to be some overt resentment. In response, we hit the afterburners, get up to 5mph and don our smuggest faces.

There’s something very English about all this. The people fishing off little jetties, the well-manicured lawns of the river houses… Even the names of the boats are unbearably quaint; “Windsor Bridge”, the “Lazy Otter” and the “Fair Countess”. We leave them all in our wake as we power past.

As the sun lowers and the sky turns golden, the town of Horning looks unbearably scenic. The River Bure runs through it, lined with sprawling Tudor homes (some genuine, some faux) topped with thatched roofs, homey-looking pubs and gorgeous, modern boathouses with water garages occupying their lower floor. The locals want make it quite clear: there’s a lot of money in Horning.

Judging by the number of boaters enjoying al fresco dinners, it seems we’re quite late to be still looking for somewhere to moor for the night. We push on towards Wroxham, but the Broads Authority rules prohibit travel after sunset, so we stop just short and drop anchor a kilometre from town. Clouds of mosquitos rise up as the sun dips down, like some kind of horrible seesaw. Those which stray too close to the surface of the now glassy Bure are met by fish greeting them with a deadly kiss. We cheer each fatality as we prepare dinner.

When the lights go out on the Broads, things get very dark indeed. It’s not long after our quick supper (the Sovereign has a petite but well-appointed galley on board) that I fall asleep, the Bure sloshing gently beneath my head.

The sloshing has become something more like rocking the next morning as early-risers scream past at absolutely illegal speeds of perhaps 6 or 7mph. After a quick turnaround in pretty Wroxham, we decide to head south as fast as we can (i.e. not very) in order to cross from the North to South Broads. This requires precise timing as delicate transition happens at the haggard coastal town of Great Yarmouth. Like many British seaside towns, its heyday came and went with the Victorian era; today it shouldn’t delay the traveller for longer than is necessary to pass through its waters.

And the Sovereign Light doesn’t have time to delay at all. The arrival time to Great Yarmouth is crucial due to the heights of the Acle Road and Vauxhaul bridges, which have miserly clearances of just 2.13m and 2.06m respectively. Our boat stands at a regal 2.36m, so at high tide we’d be faced with quite a bill if we did try to get through. Arriving an hour or so before low tide, we’ve still barely got enough room to get under – the second bridge is low enough that those sitting on the top deck literally have to duck to pass safely through – but we just about make it.

From there, we turn into a hard tide and venture out across Breydon Water, a vast, largely muddy expanse with only a narrow strait deep enough for boats to pass. Several hundred metres away from the banks and with no other boats in sight, this, finally is where we can test the Sovereign Light at full throttle. We nudge the accelerator forward, increasing our speed. Willy, our nominated helmsman, is encouraged to do it again and the Sovereign responds like the mighty galleon she is. “More!” We cry. “Give her everything!”

“Er, that’s it,” says Willy. “She’s flat out.” Perhaps you could blame the falling tide, or the gusting head wind, but the truth is that at maximum output, around 2400rpm, our boat is not exceeding 10mph.

Exhausted from the exhilaration of Breydon we dock near Burgh Castle, a 1700-year-old Roman ruin at the mouth of the River Waveney. This was one of several fortifications the invaders built during their conquest of Britain. After Rome called her men back to the homeland in 410AD, others moved into the site, but so successful, so durable, was the original design that much of what still stands today is part of their ancient structure, not anything built by the subsequent squatters.

The land has changed beyond recognition since those times, with the water channelled out, significantly lowering the sea level. What the Romans would have used as a port is now several hundred square metres of marshy, reed-covered bog. That’s in mostly due to the formation of the Broads, which were created by the harvesting of peat (a sort of heavy, combustible soil still used in whisky production today). So much of this fuel was removed that water began to flow into the excavated holes from the sea and rivers, altering the land and improving the region’s communication links immeasurably. By the 16th century, Norwich – still the largest city in the area – was second only to London in terms of its size, a hub of trade with wood, weaving and agricultural produce leaving Great Yarmouth to be sold around the world.

It wasn’t until the Victorian era and the arrival of the rail network that people started to look at the Broads as a holiday option. Initially some of the old trade boats (called wherries) were converted to tour people around the waterways. By the time the motor engine arrived, almost anyone could become a captain.

Even so, over the three days we have the Sovereign Light, I’m amazed by how much time we have alone. We make the journey in August, peak season, but yet again and again we find ourselves on stretches of water with no other boats in sight. This feeling is never more profound than when lying on the deck at night, watching the Perseid meteor shower streak across the inky black sky.

The morning after the celestial show, we head to Loddon, our westernmost point. The route along the River Chet is a violently slaloming, unpredictable affair fraught with danger and near disaster. Or it would be if the speed limit were more than 4mph. Manoeuvring our large boat through its tight banks is genuinely tricky though, as is the reverse park (stern-on mooring, to use the proper terminology) into the little bay in the heart of the village.

And then, all of a sudden, it’s time to get the boat back. The morning we wake to return the Sovereign Light to Herbert Woods, our little crew is quiet, solemn almost. By the time we’ve returned it and got back into our noisy car, there’s definitely a wistful feeling for having left the Broads behind, especially when we get on the motorway and head back towards London. As cars and lorries zip and shunt all around us, we’re all wondering the same thing: why does everything have to be so fast? What’s the rush?

A version of this piece was published in Etihad Airways’ Aspire magazine in September 2013.