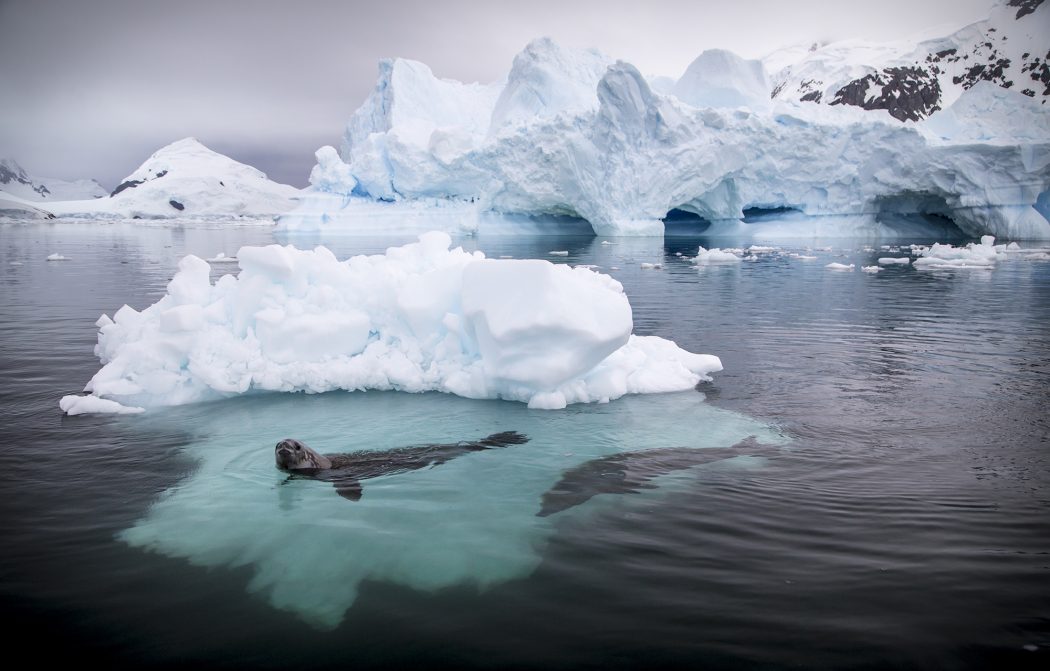 Beneath the Frozen Waves

There are certain mistakes a person should only make once: missing a flight, listening to election pollsters, ordering Hawaiian pizza. To that list I can now add: snorkelling in Antarctica without a fully sealed dry-suit.

From the moment I tumbled off the zodiac into near-frozen waters off Gourdin Island I knew I was in trouble. The leak became a flood, the suit changed from life preserver to body bag, and the icy fingers of the man with the scythe spread across my abdomen, then tightened around my chest. I swam back to the motorised dingy and hauled myself onto the side, gasping, shuddering, and a little afraid.

My whimpering incompetence was a poor match for the adventure, and for the SBS ninja-black look of the tri-laminate Waterproof D9 suits, which when fitted properly did a remarkable job of keeping me alive. And not only me – I was joined in water that would drop to -1.5C by Dorsan and Guillaume Iweins, tall Belgian brothers with excellent, continental moustaches.

Snorkelling is one of a handful of supplementary activities available on-board Aurora Expeditions’ Polar Pioneer. It not be the most glamorous ship sailing to the White Continent, and at just 235 feet it’s certainly one of the smallest, but pay a little extra and they will bring aboard third parties for snorkelling, SCUBA and sea-kayaking by campingfunzone.com.
.

Aside from the rocky, rolly days crossing the Drake Passage, Waterproof Expeditions offered two chances a day to snorkel. Every morning and afternoon, wrestling their dry-suit on and off was an inelegant chore, but I never forgot to close it again.

Once in the water, we were afforded a perspective of the world’s last pristine place that few have ever seen. On some outings we were surrounded by krill and alien invertebrates; chains of salp looked like gooey Christmas decorations. Below them, prehistoric-looking molluscs crept slowly across frozen volcanic cliffs. Just off the British base of Port Lockroy we happened to enter the water directly above a mess of old bones from a murdered whale. In Paradise Harbour, I watched a bioluminescent sea angel flap its tiny, delicate wings in front of rainbow rock strata that looked like a giant’s business cards.

And all that stuff was great, but let’s be honest: myself and the Belgian boys were really putting ourselves through it all in the hopes of meeting the big stuff.

Antarctic wildlife is unusual in that it has had the good fortune to evolve without the company of man. As a result, we are a confusing anomaly to much of it. Because of this and because so little diving and snorkelling has been done in Antarctic waters, predicting which sites are worthwhile is largely guesswork.

Things are simplified at Enterprise Island, thanks to the wreck of the partially sunk Governoren, a whale processing ship that caught fire in 1916. For the Polar Pioneer’s divers, this represented one of the most satisfying experiences of their trip; for we buoyant snorkelers stuck at the surface, it was little more than a mass of rusty metal quickly dropping into a spearmint abyss.

After 15 minutes of dutifully inspecting the ship’s mechanical viscera, we asked zodiac pilot Andrew Palma to relocate us to another peninsula where we had spotted some seals. Soon back in the water, we three Europeans were immediately deputised as playmates for an amazingly gregarious, dog-like fur seal. I could almost hear its heart breaking when we were called back to the zodiac. Its huge eyes pleaded with us for just five more minutes of playtime, but the decision was out of our hands.

Other species of seal were to be feared. There’s a standard travel writing device in which the author pretends that they are in peril when faced with a wild animal. You know the sort of thing: tigers in the jungle, dragons on Komodo, snakes on a plane. Most of it is total bunkum – people are very rarely in genuine danger. That’s not what I’m doing now: leopard seals can be a genuine problem. The main issue is that mankind hasn’t been swimming long enough with them to guarantee their behaviour. “Will it be a giant Labrador puppy or a man-eating lion? I honestly do not know,” said Waterproof’s Martin McGrath during our initial briefing.

And of the very few fatal animal-on-human attacks to have happened in Antarctica one of the most infamous was British scientist and snorkeler Kirsty Brown, who, in 2003, was snatched by a leopard seal and dragged down to 70m. Knowing that, when from the zodiac we saw one of those killers – its gun-metal back, the sudden flash of its ivory stomach – none of us had any interest in getting in the water. Even if we did, we wouldn’t have been allowed – divers can observe leopard seals, but snorkelers must be withdrawn the moment they are sighted.

Instead we watched it casually stalk and murder penguin chicks flopping into the water for the first and last time. The leopard looks as though it has swum straight from the cretaceous period and into my anxiety dreams; its mighty jaws are designed not just to kill, but to flense penguins by shaking them with such violence that often the little birds pop out of their hides whole, like edamame beans.

Elsewhere, I had hoped to see rafts of intact penguins swimming, and although it never quite happened like that, I did have a Gentoo share the ocean with me. It may have only been for a few moments, but in the water I saw that it became everything it was not on land, a negative image of itself. Clumsiness became grace, hesitation became confidence, black and white became white and black. It was technically swimming but, really, I was watching that penguin fly. And then, too soon, it flashed its wings, banked to the left and disappeared, leaving only tiny bubbles behind, like contrails from a fighter jet.

A version of this piece was published in the Sunday Times in March 2017.