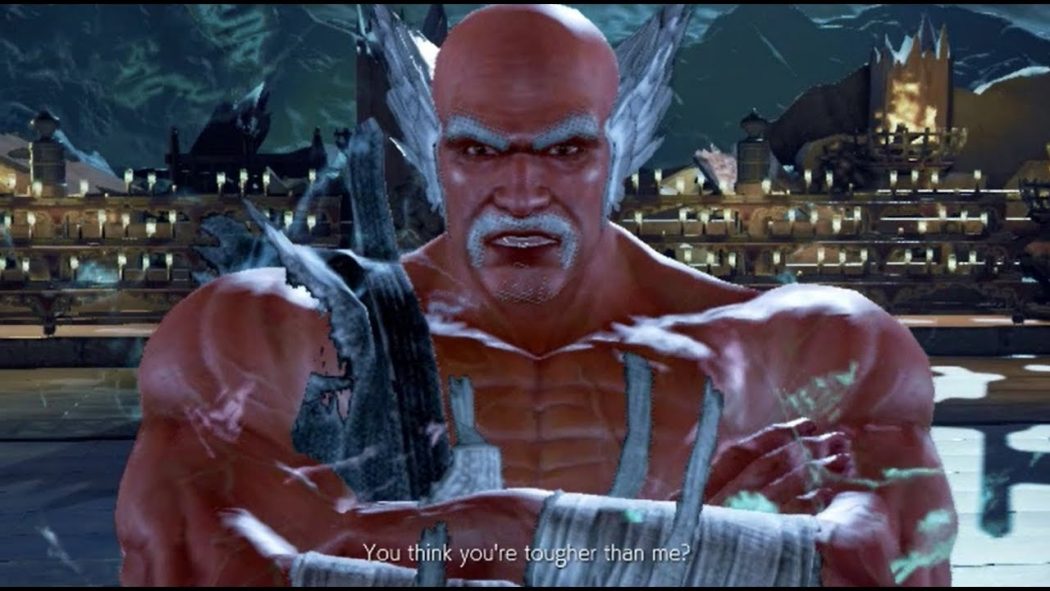 I have been good at many computer games, but I have been great at only one: Tekken. The ‘King of Iron Fist Tournament’ was first developed by Japanese gaming stalwarts Namco in 1994 and a few months later became one of the early flagship titles for the new Sony Playstation.

That’s when I first saw it, in the spring of 1995, on a 14-inch screen, playing through an imported Japanese Playstation so new it couldn’t communicate properly with the British television. Despite being low-resolution and black-and-white because of the miscommunication, my tiny 12-year-old mind was blown into a million pixels.

A one-on-one fighting game, it seemed so realistic, so much more sophisticated than anything that had gone before – even when a Mexican wrestler with a jaguar mask was being thrown through the air by an enormous Soviet android.

I played Tekken a lot, so much so that by the time the third edition was released, I was a master. I was so at one with the rhythms and mechanics of the game that I could complete it without losing a round. Moreover, I genuinely cared about its eclectic characters and would ruminate over the ones I disliked even when I was away from the controller.

This is exactly the kind of nostalgia that Disney’s Wreck-It Ralph and its sequel, Ralph Breaks the Internet, tap into: the idea that these little pieces of programming actually matter, that they have willpower and aspirations and that we, the gamers, are their custodians and ultimately friends.

Because I recognise these emotions, but also because I am an enormous man-baby, I have come to San Francisco to try and find some of my favourite games in the growing number of arcades and barcades which have popped up around the city in recent years.

It’s been perhaps a decade since I last played Tekken, but my heart skips a beat when I see the old cabinet inside my first stop, the Musee Mechanique on Fisherman’s Wharf. The museum has a 300-strong collection of vintage arcade pieces, ranging from dusty 100-year-old automatons, through to eerie fortune-telling mannequins. Then, up the back, there’s a largely ignored selection of classic computer games from the 1980s and 90s.

I make a beeline for Tekken, literally my old stomping ground, but am heartbroken to see my face – or perhaps the face of my 12-year-old self – staring back at me from a black mirror. The game is out of order. Still, there are around half a dozen arcades in the city these days and surely one will have a working version of my old pal.

“This is really the original in San Francisco. A couple opened after us, but we were here first,” says Joe Weisenberger, manager of Brewcade later that night. “There are some bigger places, almost nightclub style, but our focus is on a neighbourhood, community vibe.”

The games are important here on Market Street, but as the name suggests, there’s a big focus on booze, too. “There are 28 taps in total,” says Weisenberger. “We have Belgian stuff and German stuff, but a lot from San Francisco, too.”

It’s perhaps no surprise that here, in the home of Silicon Valley, the business model of marrying games and alcohol has proved popular. It’s also not shocking that the concept, once seen to be profitable, has been shamelessly copied by rivals, too – the tech industry is nothing if not cannibalistic, so why not apply that to leisure time, too?

Talking over the din of the bar, Weisenberger explains that some customers only come to game, but others are just here for the beer. The games are generally pretty cheap, but their star attraction is Killer Queen, which is $1 per play and can have up to 10 players at once. The 35-year-old describes this as a “destination game” with players apparently coming from far and wide. “There are only a handful in existence, so it’s really popular.”

That’s Weisenberger’s personal favourite, too, though he also admires DeathBall, which was created from scratch and debuted here: “One of our regulars used to play Killer Queen, decided to move home to Iowa, design the DeathBall cabinet out in his garage, then come back here,” says the boss. “There’s are eight of them around now.”

Just as I prepare to drop some quarters into DeathBall, I notice, glimmering against the back wall, my old pal Tekken 5. This edition came out when I was at university, but it carried the same cast of characters from the earlier games and still had the same weight and predictability as earlier versions. This means that when I select Heihachi Mishima – the world’s crankiest OAP with an ability to punch people through walls – I am essentially unbeatable. I complete the game on a single credit and turn around looking for a high-five that will never come.

I’m basking in the afterglow, writing some notes and having a celebratory beer when Nathan Yi comes up and begins to play. “Awesome, there’s a free credit in here,” he says aloud. I don’t point out that it’s only a freebie because I completed the game. Instead, after a few minutes, I offer to join in.

“Kick his ass,” says his girlfriend, Jane, who has been silently spectating until now. I choose Heihachi and follow her instructions exactly. Poor Nathan. He only came out for a bit of fun. Instead he is locked in a digital dojo with a cruel sensei. I beat him twice, perfectly, by which I mean his character doesn’t so much as touch me. When he goes down the second time, Nathan laughs nervously and offers a handshake, but I feel like climbing on top of the machine and howling across the bar.

You don’t need to be a scientist to believe that if Peter Pan syndrome – a refusal to grow up – exists then it effects men more commonly than women; the modern term ‘man-baby’ is gender specific for a reason.

Half an hour’s walk away, Emporium SF’s target market is these men-children. Their tactics seem sound. I visit this huge neon playroom on a Friday night and the majority of the crowd is male, though quite a few have brought dates along, too.

Many of the guys look a bit like me, which is to say bearded, tattooed and more than a decade clear of the education system. They probably don’t take issue with paying $9 for a pint of IPA; they probably do have strong opinions on coffee. Unkind observers would disdainfully refer to us as hipsters. It seems reasonable to assume that most of the crowd are not parents, preferring instead to squeeze out another incarnation of their own youth.

Sociologist and author Michael Kimmel defined this indulgence of teenage pursuits in his 2016 book Guyland. If I find his description uncomfortable, it’s perhaps only because it stabs at a very recognisable and vulnerable part of my own psyche.

“[This] is both a stage of life, a liminal undefined time span between adolescence and adulthood that can often stretch for a decade or more, and a place, or rather, a bunch of places where guys gather to be guys with each other, unhassled by the demands of parents, girlfriends, jobs, kids, and other nuisances of adult life.”

Reading this I wanted very much to play Kimmel at Tekken, but he wasn’t quite finished:

“In this topsy-turvy, Peter Pan mindset, young men shirk the responsibilities of adulthood and remain fixated on the trappings of boyhood, while the boys they still are struggle heroically to prove that they are real men, despite all the evidence to the contrary.”

Ralph – he of the wrecking disposition – is a little kinder in his analysis. At the end of the first movie the eponymous hero declares: “The gamers say we’re ‘retro’, which I think means we’re old and cool.” Does this apply to the crowd in Emporium SF? Perhaps not entirely. On an air-hockey table two friends thrash the puck with force that would have terrified them as children; a man with a pierced nose and distended flesh tunnels dispassionately trounces his pink-haired girlfriend at pool; a fat man in too small a t-shirt furiously accuses a pinball machine of cheating him.

Built in 1926 as the Harding Theater, this old building will have witnessed more dignified behaviour over the decades, but it’s hard to imagine that it was ever more popular. The table games seem fun, but many have queues so instead I head down towards the stage and once more to the computer games.

Emporium SF offers a token system and most games are the equivalent of 25c to play. In a city as savagely expensive as this, the gaming alone is nowhere near enough to cover the rent. Instead, the business model relies on making its money from booze, which looking at just how many people are drinking, is proving successful.

There’s no Tekken here, but there are classics like Pac-Man, Tapper, and Street Fighter II, all of which make cameos in Wreck-It Ralph. There is also The Simpsons Arcade Game.

As a children, my brother and I would spend too much of our pocket money on this 1991 Konami classic. That was back when The Simpsons was still a great TV show and you could find up to four kids willing to leave the house to stand in a grotty arcade and attempt to cooperatively take down Mr Burns and Smithers who, for reasons that aren’t entirely clear, have robbed a jewellers and kidnapped baby Maggie.

Of course, the plot didn’t really matter to us kids, nor did the ultimately repetitive and mediocre gameplay. The game offers an outline, a child’s imagination does the colouring-in. I’m thinking about this and about how many hours games like this became de facto babysitters for my brother and I, when, uninvited, Brody Jones puts a token in and joins me in the game.

“Dude I loved this when I was a kid,” he says, not acknowledging that by joining, the game adjusts for more players and generates a greater number of villains to fight. The tall 38-year-old from Chicago moved out here for a job in the tech industry and comes to the Emporium most weekends to “blow off some steam… Street Fighter is really my jam but The Simpsons is so awesome.”

It’s a shame he’s not better at the game, really. Or that having given me more work, he doesn’t have the fortitude to stick with it. Brody leaves after the second level, but I battle all the way to the end, my cup of tokens dwindling in an attritional war with Mr Burns’ henchmen. After half an hour or so I finally complete the game and go to the top of the leaderboard.

Arms working on automatic-pilot I use fill the three-character slot with the same nickname I used as a child: ACE. It’s an embarrassing signature for sure – I think I even knew that as a child – but I know that with these games nothing was ever immortal. When the power goes off in here at 2am, the memory will be wiped, the leaderboard reset and someone else can try and get there tomorrow. It might even be me.

A version of this piece was published in Virgin Atlantic’s in-flight magazine, Vera, in March 2019.