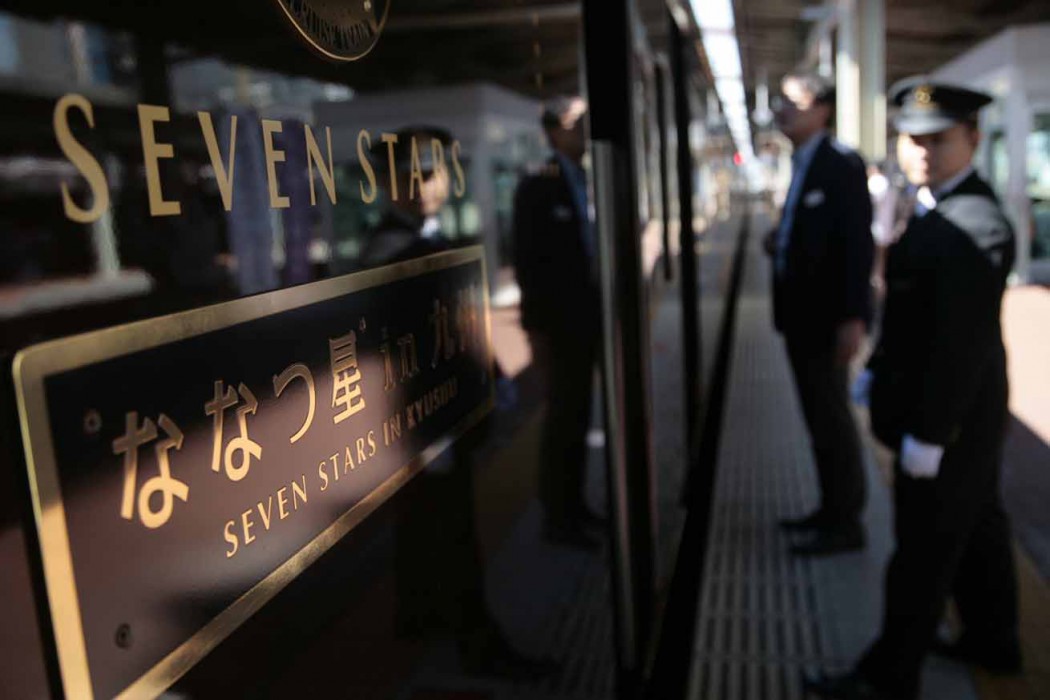 A Ryokan On Rails

Kuniko is nervous. It’s not her smile that betrays her, nor her steady English, but her hand, which trembles as she pours me a coffee in the newly-constructed Kinsei Lounge at Hakata Station. I don’t think I’m responsible for her nervousness and after a year or so of training, you might think she should be more confident. But Japanese national television station NHK has an enormous camera a few feet away from us, following our every move. Poor Kuniko, it’s a hell of a way to spend the first few minutes of a new job.

NHK is here to cover the maiden voyage of Nanatsuboshi, or Seven Stars, a brand new luxury sleeper train that tours around the western Japanese island of Kyushu. Its arrival is the biggest rail event to happen on the island since the 2004 launch of the shinkansen (bullet train), but in almost every way, this new service offers something different. The emphasis now is on taking time to absorb the history and culture of Kyushu, if only for a few days. So where the shinkansen can speed from Hakata Station in the north of the island to Kagoshima in the extreme south in under two hours, the Seven Stars spends a leisurely four days to do the round trip, taking in all seven of Kyushu’s prefectures along the way. Where the bullet train lets commuters recline their seats to catch a brief nap between destinations, the seven carriages of the new luxury train share 14 suites, each with a different design, but all fitted with en suite bathrooms and petite twin beds. At one end there’s a bar and restaurant car; at the other two luxury suites share the final carriage. You’re supposed to look at Nanatsuboshi and think of a bygone era of train travel.

The very last car is the most expensive, offering sensational views out of the rear, all-glass wall. In the future this suite will no doubt go on to host the great and the good, but for its maiden voyage, it hosts neither dignitaries, nor VIPs. For its first trip, it’s hosting me and a funny English fella called Jon. We are two of a rag-tag group of European journalists, the first official Seven Stars passengers, here to cover its unveiling. This is strange for a number of reasons, not least because of the Japanese national press covering our departure. Journalists covering other journalists is rarely a good thing. Are they jealous? Angry even? It’s impossible to say, and it’s unlikely they would let us know even if they were furious, but we are on board and they are not. They can’t even step inside for a quick look around before we leave the station.

There are several reasons for JR Kyushu not entertaining the native media. Chief among these is that domestic demand was so enormous there was simply no need – every ticket on board every journey for the Seven Stars’ first six months has already been sold and could have done so nine times over. We have only found ourselves on board because company president Koji Karaike wants to promote his new baby to Westerners, as though their approval will validate his ambitious $30million project.

From April next year, the train company will reserve two of the 14 suites for non-Japanese guests. Without this amendment, it would have taken years for foreigners to get on board. How has it been so wildly popular? Well for some Japanese people, to be seen spending money is exceedingly important. This is a country which has over $10 trillion of debt, twice its GDP, but in which Suntory can tap a 50-year-old barrel of whisky and have its $12,000 bottles sell out in hours. Earlier this year, businessman Kiyoshi Kimura paid over $1.5 million for a fish, the first bluefin tuna of the new season at Tokyo’s Tsukiji market. So financial doom, a falling population, unending economic pressure from China – what of them? There’s a new, expensive train to ride? Great.

President Karaike had wanted to build the Seven Stars for 25 years and within months of becoming president of JR Kyushu, he commissioned renowned designer Eiji Mitooka to make it a reality. The result is a striking wine-coloured train with chunky gold emblems running along its flanks, the kind of thing that draws a photo-snapping crowd wherever it goes. Jon and I must end up on a dozen strangers’ Facebook pages.

Karaike’s guests have the choice between a fleeting two-day, one night course that stays in the north of the island, and a longer, four-day course, with two nights on the train and one in a ryokan (traditional Japanese inn) in Kagoshima prefecture. While the train doesn’t go anywhere in a hurry, it doesn’t spend too much time at any of its scheduled stops either. Japanese tourists are well used to such brevity, but it may feel a little frustrating for foreign guests. Take Nagasaki in the west of Kyushu, for example, a city that’s impossible to cover in a day, let alone in a few hectic hours. It was here in 1597 that 26 Christians were crucified as Japan moved towards its isolationist Sakoku period; but here too that the Dutch were allowed to trade when all other nationalities were forbidden. For most people, however, Nagasaki is most famous for the apocalyptic horror of 9 August 1945 when the atomic bomb Fat Man exploded in the sky, killing and maiming thousands, razing much of the city to the ground.

Curiously, though, none of those things are covered when visiting on the Seven Stars. Instead the focus is largely on visiting Glover Gardens, former home of the Scottish industrialist Thomas Blake Glover, who helped revolutionise Japan when it finally reopened its doors to foreigners in the late 19th century. Situated high on a slope above Nagasaki’s famous harbour, its views are unrivalled, the ornamental garden as perfect as you could wish for. Presumably tourists, especially Japanese tourists who will always be the majority on Seven Stars, prefer this to ugly history.

Really, though, the excursions are little more than fillers between stints on the train. On board the time is spent eating the finest cuisine Kyushu has to offer and simply watching the island trundle past the window. Between that and the sumptuous design details inside and out of Nanatsuboshi, there are plenty of distractions, though perhaps not quite enough to get away from how impractical this beast can be. When it came time for lights out, my roommate and I spent 20 minutes trying to find the light switch before eventually giving up and sleeping with them on. The next morning we found out that at least three others had been similarly stumped and resorted to unscrewing the bulbs in frustration. While this perhaps doesn’t say much for the intuition of the average European journalist, surely such a simple task should have been much easier?

But you have to look hard to find serious fault with the train. Everything is incredibly clean, the attention to detail is sensational. The staff is handsomely turned out at all hours of the day, genuinely keen to help when they can, none more so than the violinist and pianist duo. They spend most of the time, serenading guests with a piece written specifically for the launch, the train’s official theme song. But they also take requests ahead of the journey, practise, then perform on board.

Before flying to Japan, I couldn’t think of any songs that weren’t faintly ridiculous, however Jon decided to request Guns N Roses’ tour de force Sweet Child O’ Mine. Amazingly, the duet dutifully bought the CD, listened to the track intently and memorised it by ear. At night, after a lot of the other passengers had retired for the evening and following several large Japanese whiskies, we were lucky enough to hear their rendition. It was perfect, sounding more and more so with each drink. We howled along, in love with the whole ridiculous concept. Then they finished, we applauded wildly and clinked glasses, agreeing that, impracticalities and all, the Seven Stars is a really excellent idea.

A version of this piece was published in Fairfax Media’s Traveller section in December 2013.