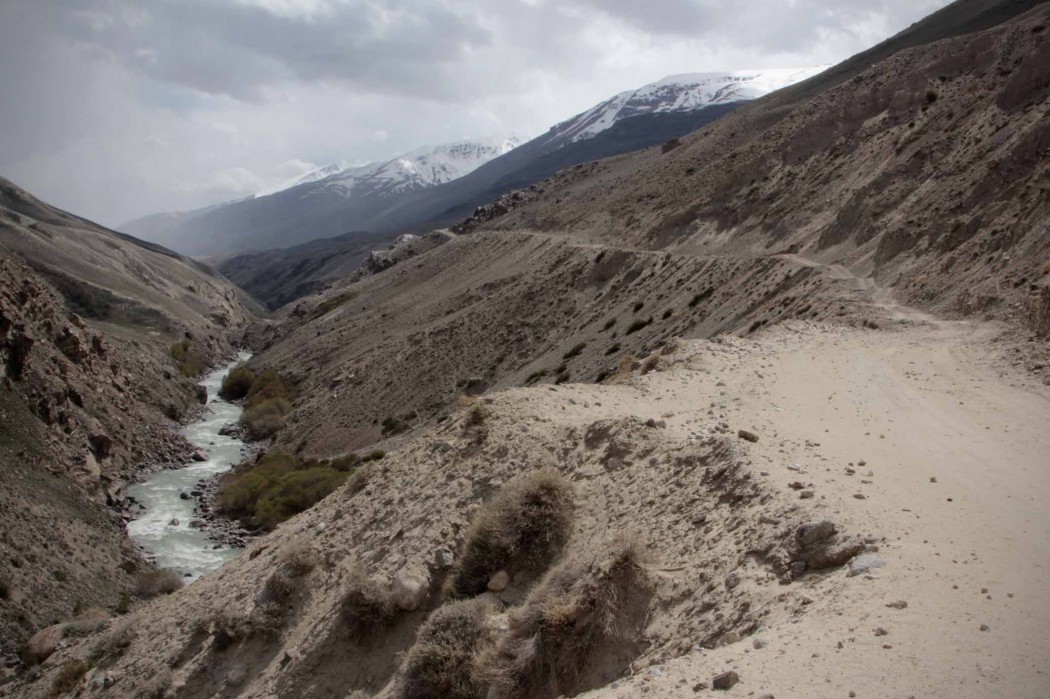 By definition a road trip should feature at least one road, but given their woeful condition in Tajikistan, it’s probably not a fit term to describe the driving surfaces there. Last year I spent 10 days travelling around the region’s smallest country as part of the inaugural Central Asia Rally, which started in Budapest and made its way east for 18 days, through nine countries, over 8000 occasionally paved, often obliterated kilometres. Yet, ruined and often non-existent as its roads were, Tajikistan was the undoubted highlight.

Like everything about Tajikistan, this was a surprise to me; prior to signing up for the Rally, I doubt I could have easily found it on a map, nor told you a single solid fact about it. But on the trip I learned a few things, not all of them good.

Here are some facts about Tajikistan: according to the IMF Tajikistan has a lower GDP per capita than Papua New Guinea and South Sudan; the UN Office on Drugs and Crime believes that as much as 50% of that money may come from the heroin trade, primarily because tonnes of the stuff floods north to Russia from Afghanistan, through the flimsy Tajik borders. How is that possible? A 2010 Wikileaks cable revealed that American diplomats believed: “From the president down to the policeman on the street, government is characterised by cronyism and corruption.”

Admittedly, none of that paints too rosy a picture of this little landlocked country – and if all you ever saw of it was its vile and violent capital Dushanbe, it’d probably put you off completely. But, mercifully, the moment you head into the countryside of Central Asia’s poorest nation, you realise something else: Tajikistan is one of the most extraordinarily beautiful countries on our planet.

Here are some more facts about Tajikistan: it is 93% mountainous (the biggest peak is Ismoil Somoni, which stands at a literally breath-taking 7,495m above sea level); it is home to around 10 percent of the world’s remaining snow leopards; it is also the domain of the endangered Marco Polo sheep, which has larger horns than any other breed and attracts dreadfully rich (and more generally dreadful) hunters who come in search of it as a giant trophy.

But the most important fact of all? The loveliness of the Tajiks, as downtrodden a people as it’s possible to imagine, but who, in my experience at least, exuded heart-breaking levels of decency and warmth.

Towards the end of the rally, my Hungarian co-drivers Gabor and Attila and I were nursing our beaten-up Nissan Vanette towards the border with Afghanistan when we came close to running out of food and water. With only a vague hope of finding supplies, we stopped in the ultra-bleak settlement of Alishur, high in the Pamir Mountains. Alishur is comprised exclusively of single-storey concrete blocks, forced on locals by the ruling Soviets. Before that they lived in warm, mobile yurts; how they must resent those ugly, inferior government structures. As we pulled into the village, Tajiks emerged from these grey cubes, keen to see what was going on. Some of the elders spoke enough Russian that Attila and Gabor could explain what we were after.

One of the locals opened his shop and sold us a few Snickers bars and some bottled water. Attila asked if they had any bread. The man shook his head and ushered us out, locking up behind him, before jumping into our van and pointing down the street. We were being directed to his house, where he ran inside and emerged with some squashed loaves. He wouldn’t take any money from us. His mother, a stout woman with bulletproof Soviet-issue glasses, hobbled out to see what the fuss was, then insisted we come in for tea. When we explained that we didn’t have time (as usual we were racing against the sun to get to our next check point) I felt sick with guilt – here, standing on the roof of the world, these people with less than nothing were so hospitable to we strange, dusty foreigners.

Ah but the roads – the roads really were abysmal. Tajikistan became independent in 1991 and, outside of Dushanbe, that was surely the last time any maintenance work took place. From the moment we crossed from Uzbekistan a week earlier, it was clear that the Tajiks couldn’t afford to look after their highways. The first leg of the journey wholly in Tajikistan was from the gorgeous dam-town of Nurek to the mountain village of Tavildara, just 210km away. No doubt because of the revenue generated by the dam, the roads were initially smooth and wonderful – our only delay was an army officer who stopped us for a “toll”.

That’s another small fact about Tajikistan: though it is amazingly corrupt, at this level, it’s manifested in a kind of cute, almost childish way. The soldier initially asked us for $5, but dropped it to $3 and a cigarette when he realised we were foreigners.

It was shortly after that exchange that the roads disintegrated and eventually disappeared altogether. We rocked and rolled and bucked and skidded our way up into the mountains, making painfully slow progress – 210km is not far, but it’s an all-day journey when your average speed is just 23kmph.

Though your spine may be compressed by the bite of each yawning pothole, your eyes are never bored in Tajikistan. Giant fissures have torn their way between peaks like cracks in vast theatre curtains, carrying small tributaries of melt-water down to the valley floor. Eventually you pass these, up beyond the tree line, where the air grows thin and the land turns the colour of many minerals, layer-caked in the mountains. Then the sky opens up to enormous blackness and, with no town or city lights to mask them, the stars dance overhead like a shimmering ocean.

If these routes were in Europe or North America, they would be flooded with tourists. Here people are few and far between, but occasionally we’d arrive in nameless hamlets where the locals would come out to wave and laugh as our van drove up one dusty slope and trundled down the other side, like a mad ship traversing a mountainous sea.

On our third day in Tajikistan, we left Tavildara for Khorog, a journey which saw our van try, and fail, to drive through a river (other rally members had to tow us out) before heading to the Saghirdasht, the “summer route”. At 3200m above sea level, it’s only accessible when snow and avalanches allow – hence the name – but even when the route is clear, few Tajiks use it. By the time we rolled down the other side of the mountain three hours later, the only vehicles we’d seen were the skeletons of old Soviet tractors.

It’s a strange place, Khorog, a settlement of almost 30,000 people wedged into a jagged valley peering over the Panj River, the southern border with Afghanistan. Hundreds of kilometres away from any other major town it has absurd luxuries like a university, internet cafes and a perfectly serviceable Indian restaurant. All of it has been made possible by the charitable work of the Aga Khan Foundation which has pumped millions into Khorog while the government has largely ignored it. But despite its remoteness, it’s a very diverse place, a convergence of north, east, south and west, Russians, Chinese, Uzbeks, Kyrgyzs and ethnic Tajiks, blown apart then drawn together in the chaos of the Soviet Union.

From Khorog we took the famous Pamir Highway, past Alishur, all the way out to Murghob in the extreme east of the country. It survives almost exclusively because of the hard work of a few selfless NGOs and the endless stream of Chinese trucks thundering through en route to mother Russia. The compensation is that the Chinese make some contributions to the upkeep of this long section of the highway, meaning you can travel a good couple of hundred metres before slamming into another pothole.

After completing some charitable work in Murghob (rally members brought wheelchairs, books and much-needed stationery for the local school) we turned back towards Dushanbe, this time following the Panj for almost three days with Afghanistan just on the other side. For most of it, the road was nothing more than a dirt path, often one precariously scraped out of a mountainside with oblivion just a few feet away. When we finally lost some altitude, we hugged the banks of the river, so close that we could see Afghanis on the other side, washing their clothes in its waters. Sometimes they’d wave and we’d wave back, and I would wonder who was more confused by the unlikeliness of it all.

Eventually our van died. With over 200,000km on the clock it was probably inevitable, but we still felt sad abandoning it, alone in the mountains. Fortunately for us, one of the other cars on the rally wasn’t far behind and picked us up, driving us as far as the next town where we gave the van’s keys to a mechanic before paying a man with a 4×4 to take us all the way back to Dushanbe. However, we didn’t pay him enough for an exclusive hire, so we picked up another two travellers heading back to the capital. To my surprise one of them, a Slavic-looking man in his early 30s, spoke a little English. It was a seven-hour journey, so we got talking.

“Man, I really love Tajikistan, it’s so beautiful,” I said with sincerity, “but the roads?” I made a face like I was disgusted and shook my hand like it was covered in something putrid. “Anyway, what do you do?”

“I work for the government,” my new friend said with a smile on his face. “For the Ministry of Transport.”

A version of this piece was published in Fairfax Media’s Traveller section in September 2013.