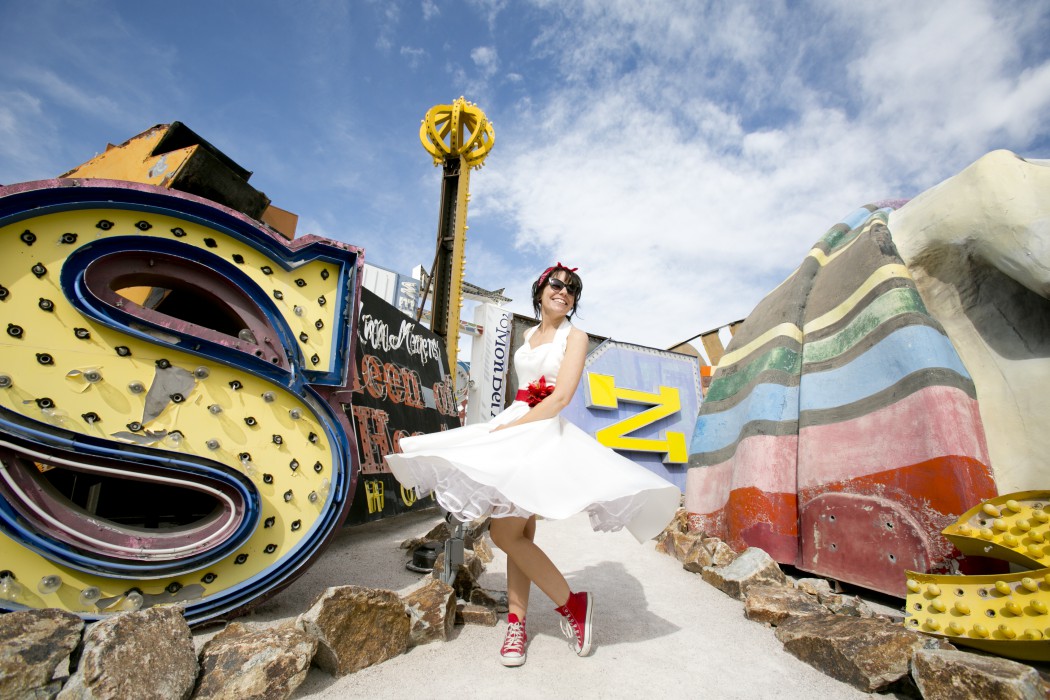 First of all I should say we married for love, and only after three years of being engaged. But in the end we wanted to marry in a hurry and I was already visiting Nevada anyway so Katy, my fiancée, decided to fly out to Las Vegas, the world capital of quickfire marriages, to “git ‘er done”, as the locals almost never say.

It was that or a grey office in a grey building in grey Britain, but until the last moment, we didn’t seriously consider Las Vegas as an alternative. When I thought of Vegas weddings I thought of people doing it blackout drunk or sensationally high, or because they’d lost (or won) a bet. In most instances, there seemed to be a vague sense of shame attached.

A healthy number of that crowd do still shamble into plastic chapels throughout the year, but the majority of couples do it because they mean it. And we certainly do, standing in the middle of the Neon Boneyard (or Neon Museum) on a bright March morning with Pastor Pete reciting a script he’s read thousands of times before. He adds a couple of personal touches here and there, and as requested leaves out any religious references. He calls Katy “Kacee” a couple of times, and our Britishness prevents us from correcting him, but there aren’t any mistakes on the documentation, so when we say “yes” it counts. The sun is shining. Life is good.

Our brief service takes place before the Neon Boneyard is open to the public. We chose it not because we have any connection to the demolished casinos and hotels that donated their signs to this excellent little museum, but because it looks great in pictures and, quite simply, because it’s a lot less weird than some of Vegas’s other options. There was talk of being married in a helicopter, but we decided we didn’t need to add the fear of death on top of everything else; same went for me being kidnapped by cowboys and held at gunpoint.

Over 80,000 marriage certificates were issued by Clark County in 2013, the most in America by some 50,000. If all of them were followed through, then a couple was married every four minutes and 20 seconds. That doesn’t include commitment ceremonies [gay marriage was only made legal in Nevada in October 2014] or renewals of vows. With so many people looking to get hitched, the options for ceremonies are as extensive as they are bizarre.

The only consistent element is a $60 license which must be bought in person at the local marriage bureau. That and a declaration of how many times you have been married previously. (A drunk man at the booth next to me said: “This is my third, the first two were just for practise,” at which his even more hammered fiancée only snorted in amusement.) From there the options are virtually limitless. You can have a shotgun wedding featuring actual shotguns. You can be married in the courthouse at the National Museum of Organised Crime. You can be married on the roller-coaster at New York New York, or on the 103rd floor of the Stratosphere. At Mandalay Bay you can get married underwater at the Shark Reef Aquarium or, if you prefer, on their fake beach. You can be married in full medieval(ish) armour at Excalibur. Or at the Bellagio, with its famous fountains spurting away behind you. Water not your bag? No problem – do it in front of the Mirage volcano, because who wouldn’t want a fibreglass volcano erupting in the middle of their nuptials? Darth Vader can marry you. So can Spock. You can be married wearing blue suede shoes as you drive through a chapel in a pink Cadillac. Absolutely don’t care where you tie the knot? Head to ubiquitous fast food chain Denny’s – they offer free pancakes with every service.

Brendan Paul, “owner and Elvis” at the Graceland Chapel, knows more about the city’s frantic wedding scene than most. Originally from LA, he’s worked in Vegas for 19 years and owned Graceland for the last decade. Before Elvis (the real one) gave his blessing for it to be named after his home, this little place beyond the Strip operated for 50 years under the name Gretna Green.

On average Graceland does 150 ceremonies a week; Paul personally appears at around 100 and can do as many as 25 weddings in a single day, knocking them out in 15 minutes sessions, with songs, dancing and as much of the holy spirit as his punters desire. He has married the same bride to a new husband; he has married the terminally ill and been grateful that his comically large sunglasses hid his wet eyes. When he needs time off, there are another three Elvises (Elvi?) ready to step in. The business of marriage rarely slows down and Paul reckons he may have attended as many as 50,000 weddings of people from around the world. The weight of this data feels especially heavy when he concedes that his own marriage is currently winding down, though I feel a little lighter when he tells me that, no, he didn’t get married here.

Until 2006 when the local courthouse began to close at midnight, Graceland, like wedding venues around the city, would marry people through the night at weekends, regardless of how long the couple had known each other or how sober they were. I asked the processing officer back at the marriage bureau what condition a person has to be in to legally apply. Without laughing she said: “Vertical.”

Even with the reduced hours, a significant number of the annual 160,000 regret their decision, but the chapels don’t offer an exit strategy. “If we get a call with someone saying they made a mistake, we say: ‘Well, the part that we did here was legal – you’re married. We can’t change it. We can’t annul it. You have to go back to the courthouse and they’ll tell you how to fix it,’” Paul explains while strumming his guitar in full Elvis regalia. “But I tell the girls who work out front: to us it’s just another day at the office, but to everyone who comes through here, it’s their wedding day, a special day – even if it’s their eighth one.”

It’s hard not to like Paul – his relentless energy and optimism almost make me wish I’d been married here, even though I have no love for Elvis and wouldn’t have known where to look when he started singing “only fools rush in…” He welcomes all comers to Graceland and has to find a way to have fun but be professional, even on that day he knew the groom was standing at the alter with annulment papers in his back pocket, and the time a recently bereaved widow brought in a picture of her late husband and insisted Elvis renew the vows.

We couldn’t have been happier with the Neon Boneyard, though – or anything about the day. From the museum we went to play a bit of Kiss-themed mini-golf, putting up Gene Simmons’s tongue on the 18th. (It’s possible to get married here too – it has the band’s full endorsement and a chapel just before the first tee. Understated it is not.) Then we decided to take a bit more sun, and a couple of deep breaths, before heading out with LV Wedding Connection for some photos around the city.  They are well established as wedding fixers and can meet almost any demand but their photos are very… Vegas. Standing back to back in front of the Bellagio, making an “eternity loop” with our arms, me unsteadily propped on top of a rock, pretending to hold the famous, fabulous city sign… What happens in Vegas very rarely stays there, but I’m happy for that to be the case with those dreadful photos.

Leaning into the city’s obsession with gaudy, for the weekend I managed to procure a Rolls Royce drophead coupe, $450,000 of car. It got a lot of attention around Las Vegas generally, but when we hung a “Just Married” banner from the back, people went nuts. When a car like that drives around at home, people stand around silently resenting it, trying not to get caught staring; in Las Vegas people reacted as though we were royalty – whoopin’, hollerin’, taking photos. It’s easy to mock American enthusiasm, unbridled and excessive as it can be, but in the middle of the desert, far away from gnawing British cynicism, we kind of liked it. Hell, we loved it.

After a drive up and down the Strip, we had an excellent dinner at Alizé at the Palms hotel, then went to watch the Zombie Burlesque show. At one point a scantily clad hoard of the undead dragged me onto the stage, where I was bound, whipped and paddled for the entertainment of the living. They didn’t even know it was my wedding day.

A version of this piece was published in the Sunday Times in April 2014.