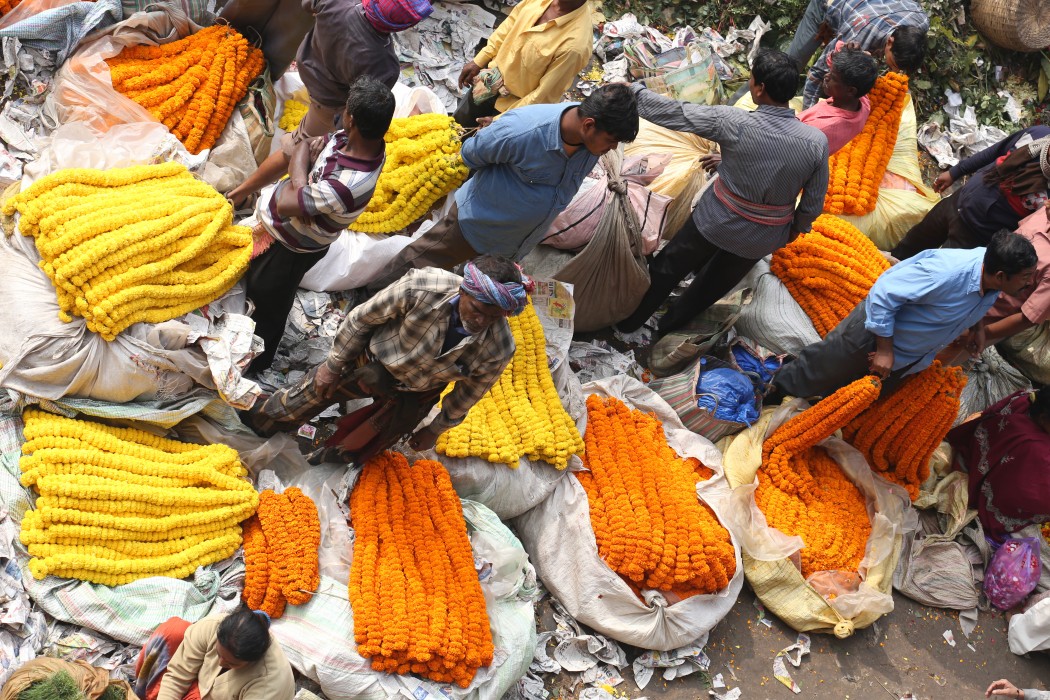 Staying at the Oberoi Grand Hotel then walking out onto the streets of Kolkata is like witnessing the creation of the universe. You are inside and there is silence, a void. Then you walk out, just a few strides, and there is everything, all at once. A mammalian flight reaction may make you retreat for a few moments, as it did with me, and if it does, it’ll feel as though someone has switched off a giant television that was blaring white noise at maximum volume.

You definitely don’t come to Kolkata to relax, but that is not to say you shouldn’t come to Kolkata. This is a city that has crammed more into the last 300 years than almost any other on Earth, booming and busting in spectacular style. It soared like a condor during the good times, then transformed into an elephant mid-air and came crashing down in the bad. Without coming here it’s tricky to say where on the parabola it is these days, but talk to many locals you’ll hear plenty of hope.

Manjit Singh Hoonjan, owner of Calcutta Photo Tours, has never been busier taking foreigners around his home city. By that small measurement at least, things seem to be improving – people are again curious, and Manjit is part of an unofficial movement to show them that Kolkata, as no local calls it, isn’t as bad as they’ve been told.

“This was depicted as the city of the dead, dying and decaying,” he says as he leads me on a tour of the Bow Barracks area of the city during his Cultural Kaleidoscope programme. He explains that the more destitute Kolkata appeared to the outside world, the more donations came flooding in. For certain religious groups in the city, including Mother Theresa’s, this was beneficial.

Shaking the image of collective suffering is proving difficult for the city. The world’s media have not descended on it in the same way to say: “Look – here lies hope!” As a result, visitors to India won’t make the detour here on their first visit to the country, nor their second or third. Considering its role in the evolution of India, and arguably the entire world, this seems like an injustice.

If not quite founded by the British, old Calcutta was very much developed by their Empire and the amorphous, sinister East India Company. Tomes have been written about their cruel, frequently violent brand of capitalism – Job Charnock, a Company man and key figure in the foundation of Calcutta, was said to have had people whipped close to the dining room so he could listen to their cries while he ate. But a side effect of their commerce, of all trade really, was that people from wildly diverse backgrounds travelled to this outpost to do business. Under the East India Company, and then officially under the British Raj, Calcutta was the capital of India for almost 140 years (until power was transferred to Delhi in 1911) and it gathered people like it gathered coins.

Aside from the assertion of British might, if Calcutta was ever a success, it was because of trade and tolerance. People of all nations, faiths and colours gathered here as the Empire forced it to grow. Consequently, today there are mosques, churches and temples, some of which are hundreds of years old, built by Portuguese, Armenian, Iranian, French and British settlers. Iraqi Jews also arrived and built grand synagogues which still stand today, though their congregations are now outnumbered by the Muslim janitors who maintain them.

The Chinese arrived too, and remained, as did their temples and recipes. Today, Calcutta Chinese is regarded as a style of food all of its own, and this is the only Indian city with a daily Chinese newspaper. There’s also a Zoroastrian fire temple, and on the city limits, a place for their elaborate and unusual sky burials.

Cows are sacred to Hindus and their slaughter is banned in other states, but so cosmopolitan has this city always been, that beef is readily available, along with just about every other type of meat you can imagine. Along some streets, beasts will be in various states of disrepair and doom: clucking in a cage; squealing on a block. Here pigs’ heads sit on counter tops, eyes closed, grinning at their fate, and there a man disembowels twitching chickens, the sticky viscera dripping between his bare toes.

Manjit encourages his guests to take photographs of everything and everyone. His tours can focus as much or as little on photography as his guests request – he can point out hidden gems to people who know what they’re doing or offer professional advice to those who do not. All the while, the city and her curious, endlessly photogenic residents make his job easier.

Kolkata is never not moving, always your senses are enlivened. This is one of the world’s most overpopulated cities, with six million people – the entire populations of Finland and Cyprus combined – pouring into the centre every morning, then draining out again each evening. Consequently it’s permanently colourful, endlessly chaotic and utterly breathless. Rules of the road seem to follow no logic other than that of the British SAS (“He who dares wins”) and crossing them keeps you very awake.

You rarely feel more alive than when you’re in Kolkata.

There are some advantages to this mega population. Around 200,000 people recycle – scavenge, to be more precise – across the city, sifting through bins, gutters and dumps for plastic, glass and wood in order to sell it on. It may not be voluntary, in the ordinary sense of the word, but in its way it makes the city function more efficiently.

To help his guests cope, Manjit juggles photography advice and history lessons with keeping the group safe and together. He’s also proud of his the region’s food and makes a point of making sure everyone is full of chai and the sweet treats for which Bengal is famed.

Four hours after starting, I’m back at the Oberoi, my mind blown, my camera’s memory card full. I want to cry out, to tell the staff that it’s bedlam out there and that I can’t remember the last time I was somewhere that felt so full of life. But that would A) ruin the serenity inside and B) be telling them what they already know. Each time I leave the hotel, it’s the same – I see things, smell things, hear things so extraordinary that I’m frequently unsure if they really happened. It’s like seeing the world by putting my head out of a car window at 200kph. In three days and two tours with Manjit I accumulate 1,000 photographs of a quality I’ve never managed before. I come away with stories that I know I’ll be telling for the rest of my life. But why? Why is Kolkata so ludicrously relentless? And how can people cope with living here?

To try and make sense of it all, I arrange to talk to Santimoy Bhattacharya. Born in 1936 in the house he still lives in, Santi, as he’s known, has seen Calcutta transform into Kolkata, gaining independence  from Britain along the way. He will be 79 years-old this year and has just had his license renewed, making him quite possibly the oldest guide in India and, with over 50 years in the business, undoubtedly one of its most experienced. In 1948 he heard Mahatma Gandhi talk, and later met Mother Teresa on several occasions, though he describes her as the “wholeseller of the bad name of Calcutta”. Like Manjit, his job is essentially to promote his city – a tough task when one of the world’s most famous people spent a long time denigrating it.

Still, he gets frustrated by the lingering attitudes towards Kolkata, domestically and internationally. “I challenge you to find me one family in India whose grandfather did not make money through this city,” he says. “And now they say: ‘Don’t go to Calcutta.’” He once went to New York and visited the Indian tourist office, pretending to be an expat interested in visiting his hometown. The agent on site tried to dissuade him from doing so, though he’d never actually seen it for himself, lying: “It’s full of dead bodies!”

It’s as though Santi feels the need to make up for all of the slights and slanders by continuing to work for Kolkata long past an age at which most people would have retired, to say again and again: “This is not a necropolis”. No other line of work would allow him to say it to so many people so often.

Five decades of guiding have given him lines that I’ve no doubt thousands people have heard before, but which have been rehearsed and distilled like a master preparing for the stage. “I have travelled a lot,” he says, changing his tone to a sort of grandfatherly weariness. “Half of the world, I have seen. India? Every brick I know.” He pauses while I smile. “Every country, every city in the world, has a struggle for existence. But what is the difference between your city and my city? Between London and Calcutta? Between New York and Calcutta? Between Delhi and Calcutta? We know how to struggle for existence, but,” he puts a big emphasis on that word and cannot contain a grin of his own, “our speciality is that we do it with a smile.”